Our live coverage has ended. Scroll through the posts to read more about the impeachment trial of President Trump.

Lead House impeachment manager Adam Schiff seized on comments made today in court by the Justice Department, which suggested the DOJ endorsed impeachment when the administration refused to cooperate.

What's this about: The court hearing in Washington was about the House’s lawsuit to enforce subpoenas for documents from the Justice and Commerce departments related to the 2020 Census. When asked by the judge what the House could do when the executive branch stonewalls, the DOJ lawyer James Burnham jumped right to “impeachment” as a powerful punitive example.

Schiff recounted the court-hearing action to the Senate this afternoon, less than four hours after Burnham gave the response to the judge.

“The judge says if the Congress can't enforce its subpoenas in court, then what remedy is there? And the Justice Department lawyer's response is impeachment. Impeachment,” Schiff said on Capitol Hill.

Members of the Senate laughed.

“You can't make this up. I mean, what more evidence do we need of the bad faith of this effort to cover up? “

More context: The House and Justice Department have been clashing over this question of what Congress can do if the executive branch ignores its subpoenas for months now.

When asked point blank by judges at previous court hearings what the House can do, DOJ attorneys previously emphasized appropriations powers and the House’s sergeant-at-arms’ now-defunct ability to arrest someone and hold them in the Capitol’s basement jail.

At a hearing today, a Justice Department attorney explained why the administration believes it’s not contradicting itself during the impeachment trial — after the House and House managers have repeatedly attacked Trump’s legal teams for doing so.

DOJ’s James Burnham said the House wants to have it both ways. The House wants to impeach the President for obstruction of Congress, and also ask courts to enforce its subpoenas for executive branch information.

And, he conceded, the Trump administration wants it both ways too—no impeachment, and no court cases.

“They are hypocrites. We are hypocrites, I guess,” Burnham said in court today. Many of the lawyers in the nearly packed courtroom laughed.

Some context about this hearing: The court hearing was about a House lawsuit over administration documents related to the 2020 Census, but mirrored major separation of powers questions related to impeachment. The House Oversight Committee sued the Justice Department and Commerce Department in November, asking a judge to enforce its subpoenas for documents. The case revolves around the controversial and ultimately unsuccessful attempt by the Trump administration to add a citizenship question to the census.

In court, the Justice Department has maintained for months that judges shouldn’t have the power to settle standoffs between Congress and the White House.

This week, the House in court has pummeled the Justice Department about how this differs from what Trump’s attorneys have told the Senate. The House raised the contradiction over several court filings in cases that relate to Congressional subpoena power as it investigates Trump, pointing out Trump impeachment attorneys said the House should have gone to “the courthouse six blocks down” the street.

House managers during the trial have pointed out the contradiction too, repeatedly.

“They're in this court making this argument, they're down the street making the other argument,” lead House impeachment manager Adam Schiff said on Thursday.

In response to a question from Sen. Ted Cruz about former Vice President Joe Biden and his son Hunter Biden, Trump impeachment attorney Pam Bondi noted that “it is very interesting that he said he never spoke to his son about overseas dealings, his son said different things.”

Here’s what Joe Biden and his son Hunter have said about their interactions regarding Hunter’s involvement with Ukrainian company Burisma Holdings.

On multiple occasions, Hunter said that he had spoken briefly with his father about his position on Burisma’s board.

According to the New Yorker, "As Hunter recalled, his father discussed Burisma with him just once: "Dad said, 'I hope you know what you are doing,' and I said, 'I do.'" However, the New Yorker article did not make clear whether Hunter Biden said there were any more details as part of the father-son exchange.

In an ABC interview, Hunter Biden initially minimized the exchange saying "it wasn't a discussion in any way," before acknowledging the New Yorker's characterization was accurate.

Asked about his son's international business dealings during the October 2019 Democratic debate, the former Vice President said, "I never discussed a single thing with my son about anything having to do with Ukraine. No one has indicated I have."

In a statement to CNN after the debate, Biden's campaign argued that the exchange Hunter referenced in the New Yorker did not amount to a conversation about Ukraine.

"'I hope you know what you're doing,' and 'I do,' is not a conversation. That's a failed 'gotcha,'” said Andrew Bates, a Biden campaign spokesperson. 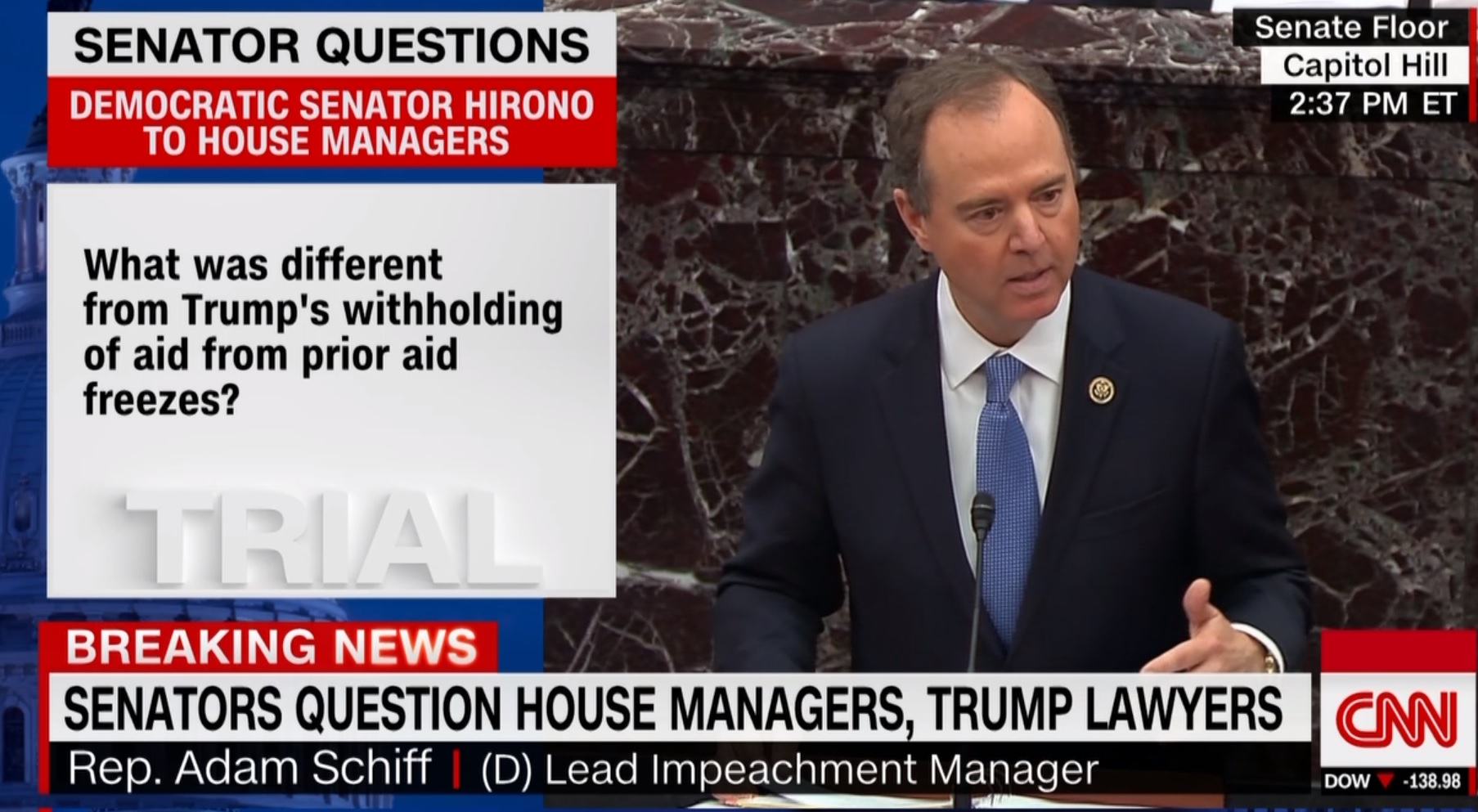 House manager Adam Schiff has no problem with a president withholding aid from a foreign country so long as it is not for a "corrupt scheme," he said today on the Senate floor.

The answer was prompted by the question, "What was different from Trump's withholding of aid from prior aid freezes?"

"No one has suggested you can't condition aid, but I would hope that we would all agree that you can't condition aid for a corrupt purpose, to try to get a foreign power to cheat in your election. Now, counsel says that if you decide the prosecution has proved that he engaged in this corrupt scheme, if you decide as impartial jurors that the constitution requires his removal from office that the public will not accept your judgment. I have more confidence in the American people," Schiff said.

More about the aid: President Trump's administration withheld $400 million in security aid to Ukraine while the President and his team pushed Ukraine to open an investigation into the President's political rivals.

The Government Accountability Office said on Jan. 16 that the Trump administration broke the law by doing so because the money had been appropriated by Congress, a decision that's at the heart of the House's impeachment trial.

The senators are lackadaisical on the second day of questioning.

Many were not in the chamber when Chief Justice John Roberts entered earlier this afternoon. Several came in during the prayer. Several more came in during the Pledge of Allegiance. During the first hour of speeches, between six and a dozen senators were gone.

While senators seemed less interested in the second day of questions, some House members showed up to watch the trial, including...

So is it a crime to out a government whistleblower? Turns out, the answer isn't as simple as it may seem. It depends on who does the unmasking, and the circumstances surrounding it.

It is true, no law explicitly prevents anyone, other than the inspector general and their staff, from revealing the name of a whistleblower. But that doesn't mean it's legal.

An outed government whistleblower could certainly lodge a complaint, and depending on the circumstances, it could result in criminal action. At the moment, there is significant debate over the question, since whistleblower protections are largely based on precedent and the current situation has entered some uncharted territory.

You can read more about this here.

During lunch this afternoon, Senate Majority Leader Mitch McConnell did not indicate whether he believes he has the votes to block witnesses — but the GOP senators discussed the possibility of a 50-50 tie vote on witnesses.

Sen. Mike Braun, an Indiana Republican, confirmed the topic came up and said "there's a lot of uncertainty" about what would happen if there's a tie in the Senate.

"There's a lot of uncertainty in terms of what happens with the presiding officer," Braun said, referring to Chief Justice John Roberts.

Why this matters: The discussion could be relevant as soon as Friday when the Senate votes on whether to subpoena witnesses and documents.

GOP Sens. Susan Collins of Maine and Mitt Romney of Utah are expected to side with the 47 Democrats, but it's still uncertain how two other Republicans — Lisa Murkowski of Alaska and Lamar Alexander of Tennessee — will vote.

If there's a 50-50 vote, it's widely expected that the vote will fail and that Roberts will decline to cast a tie-breaking vote. But there's precedent for a chief justice to break a tie because that occurred during the Andrew Johnson impeachment trial.

Sen. Rand Paul, a Republican from Kentucky, left the Senate impeachment trial in the middle of the proceedings to address reporters on the question that Supreme Court Chief Justice John Roberts refused to read because it named the alleged Ukraine whistleblower.

“I think this is an important question, one that deserves to be asked. It makes no reference to anyone who may or may not be a whistleblower,” Paul said, even though he named the alleged whistleblower.

Paul added: “I think it was an incorrect finding to not allow a question that makes no reference. It means that anybody that anybody ever said might have been a whistleblower could never be discussed in a proceeding."

When asked by CNN’s Phil Mattingly if he was given a rationale by Roberts for his decision, Paul said “you heard what I heard” and held his hand up to indicate zero.

Jay Sekulow, a member of President Donald Trump’s legal team, suggested today during the Senate impeachment trial that the Senate should give significant weight to the fact that we’re in the midst of the election season when considering how to vote.

“We’re in an election year. There are some in this room that are days away from the Iowa caucuses being made. So we’re discussing the impeachment and possible removal of the President of the United States not only during the election season — in the heart of election season,” Sekulow said, adding that he believes the trial “does a disservice to the American people.”

“We are literally at the dawn of a new season of elections,” he continued.

Citing fellow Trump legal teammate Pat Cipollone, Sekulow added, “This is really taking the vote away from the American people.”