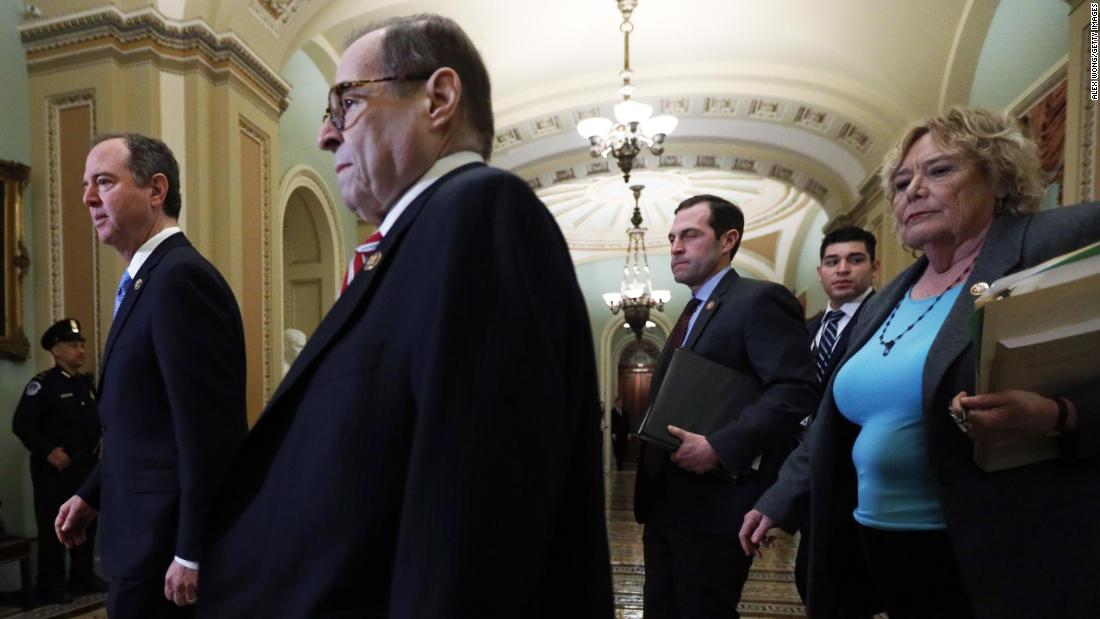 The Democratic House managers have concluded the final day of their opening statements in the impeachment trial of President Trump.

The President's defense team is expected to take the podium at 10 a.m. ET tomorrow to deliver their opening remarks.

In case you missed it, here's what happened today:

The trial is now adjourned until 10 a.m. tomorrow.

Rep. Adam Schiff urged senators not to rush the impeachment trial of President Trump and to consider allowing witnesses.

"This is no parking ticket we are contesting, no shoplifting case we are prosecuting. It is a matter of high crimes and misdemeanors," he said.

Schiff continued: "How long is too long to have a fair trial? Fair to the President and fair to the American people. The American people do not agree on much but they will not forgive being deprived of the truth and certainly not because it took a backseat to expediency."

The California Democrat closed his argument with a final plea to senators:

House manager Adam Schiff laid out several arguments he expects to hear from President Trump's attorneys in the coming days.

The California Democrat said he anticipates Trump's attorneys will argue that Trump's July 25 call with Ukraine's president was "perfect" — a line that the President has frequently repeated.

Schiff went on to say that he suspects they don't want to make that argument, but have to because Trump will want to hear it.

Schiff, the chairman of the House Intelligence Committee, said the Senate would likely hear Trump's attorneys bring up that the President said there was no quid pro quo.

Rep. Adam Schiff said that he anticipates that President Trump's attorneys will "attack the managers" during their opening arguments.

Schiff argued that this is meant to distract from Trump's misconduct.

In his closing remarks, Democratic House manager Adam Schiff said that he believes the United States "will get beyond this ugly chapter of our history" but allowing President Trump to claim that the Constitution says "he can do whatever he wants" will be an "unending injury to our country."

"As I said before our relationship with Ukraine was will survive, God willing our relationship with Ukraine will survive, and Ukraine will prosper, and we will get beyond this, ugly chapter of our history. But if we are to decide here that the President of the United States, can simply say, 'Under article two, I can do whatever I want, and I don't have to treat a coequal branch of government like it exists. I don't have to give it any more than the back of my hand.' That will be an ending injury to this country.
Ukraine will survive, and so will we, but that will be an unending injury to this country. Because the balance of power that our founders set out will never be the same."

Rep. Adam Schiff took to the podium and told the chamber that "this is the last presentation of the evening."

He began: "First point I would like to make is that I'm tired, I don't know about you but I am exhausted. And I can only imagine how you feel."

Ahead of the final few hours of the House managers’ presentation, President Trump's lawyer Jay Sekulow offered his assessment of the case: “Really, trying to remove the President from the ballot in 2020… they don’t trust the American people to make a decision.”

Sekulow noted that House managers “kicked the door down” on Burisma and the Bidens, and that they will be responding. “They spent hours on it,” he said.

He suggested his team will bring up Christopher Steele's dossier during their presentation.

“How do you not bring up the Steele dossier? They talked about all the foreign interference as if this is — I’m going to bring a couple of things tomorrow ... I’m gonna tell you something. Look for things. Look for things like the Foreign Intelligence Surveillance court. You want to talk about foreign interference? See what the FISA court had to say about that in the last couple of weeks,” he said.

The Democratic House managers have about four hours left on the clock but only are expected to take about two hours, an aide to Senate Majority Leader Mitch McConnell said.

An aide to Rep. Adam Schiff would not confirm that but did say that Schiff will speak when the end is near.

The aide doesn’t know how long the speech will be, because Schiff is at the table on the Senate floor still writing it out in longhand.

Republican Sen. Roy Blunt also said he expects there to be about two hours more.