House manager Jerry Nadler closed out his remarks this afternoon with some of the most fiery language that's been heard so far directed at President Trump, calling him "a dictator."

The New York Democrat said Trump is the "first and only president ever to declare himself unaccountable and to ignore subpoenas backed by the Constitution's impeachment power."

"He is a dictator. This must not stand, and that is why another reason he must be removed from office," Nadler said.

About today's proceedings: Democratic House managers are wrapping up their opening statements.

Submit them here and tune in to get caught up on the impeachment trial. It will air at the top of your screen here.

President Trump did not bring up the ongoing Senate impeachment trial during his remarks at an event hosting mayors at the White House this afternoon.

Trump said the event, hosting a bipartisan group of mayors, was an effort “to strengthen the bonds of cooperation between federal and local governments.”

Trump went on to praise what he saw as the administration’s accomplishments. He said American communities have been “lifted up by our booming economy,” and that the US has created “the most inclusive economy anywhere in the world.”

He also talked about the administration's work on criminal justice.

“People aren’t going back to jail at anywhere near the clip (they used to)”, he said.

He also touted national declines in murders in US cities and declines in opioid addiction and overdose deaths.

Trump signed Securing American Nonprofit Organizations Against Terrorism Act of 2019 into law. The legislation appropriates $75 million per year, for the next five years ($375 million total), to protect our houses of worship and other nonprofits from terrorist attacks through target hardening and enhanced security measures, according to the White House.

During the break, GOP Sen. Mike Braun walked by his neighbor, Republican Sen. Mitt Romney, and told him, “I think we’ve got another six hours.”

A few seconds later, GOP Sen. Tim Scott walked by and said something to Romney, who responded, “I’m dying, I’m dying!” He then opened up a bag of what looked like peanuts, then walked over to talk to Senate Majority Leader Mitch McConnell.

The session was back in order a little after 4 p.m. ET. There were quite a few tardy senators on both sides, but once most people got back in their seats, most looked fairly attentive.

The Democratic House managers hammered away at President Trump today for his tendency to contradict or reject US intelligence assessments about Russia and Ukraine.

It’s true that Trump has repeatedly questioned, dismissed, or contradicted the public assessments from US intelligence agencies about Russia’s efforts to assist his campaign in 2016, and many other national security topics, including the killing of a Saudi journalist and the North Korean nuclear program. Special counsel Robert Mueller’s report cited testimony from several top Trump aides, who said Trump views information about Russian meddling as “a challenge to the legitimacy of his election.”

Speaking with reporters during a break, Trump lawyer Jay Sekulow offered an explanation for Trump’s behavior.

“There was all this discussion about why the President was suspicious of some of his intelligence information, some of the leaders he was dealing with within his own government,” Sekulow said. “Well, the No. 3 at the Department of Justice, his wife was working for a firm that was working on a dossier against the sitting President of the United States … we’re concerned about it.”

“For the life of me, I can’t figure out why he’s still there," Sekulow added.

This was a reference to Bruce Ohr, a senior Justice Department official who met with retired British spy Christopher Steele during the 2016 campaign and funneled information from his “dossier” to FBI investigators. During that time, Ohr’s wife worked as a researcher for Fusion GPS, an opposition research firm that hired Steele to dig up information about Trump’s ties to Russia.

The Justice Department inspector general said in a report last year that Ohr made “consequential errors in judgement” by meeting with Steele without notifying his superiors. But the report rejected Trump’s claims that Ohr’s work, and the Steele dossier, was what caused the FBI to open its investigation in July 2016 into links between the Trump campaign and Russia.

House manager Val Demings opened her afternoon remarks by discussing Trump's direction to current and former White House officials not to comply with subpoenas to testify and turn over documents to impeachment investigators.

The Democratic congresswoman also listed off the government agencies that have not complied, at Trump's direction.

Here's a graphic that Democrats showed during Demings' presentation: 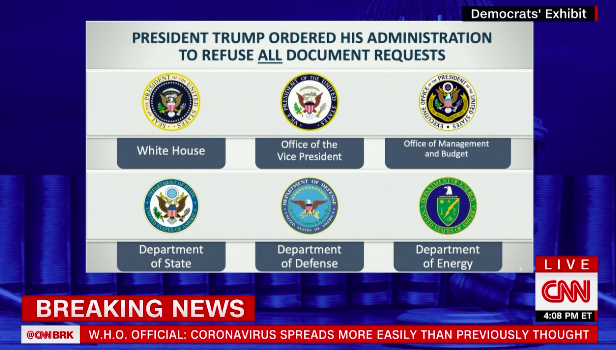 The Senate is back from a short break to continue the impeachment trial of President Trump.

The Democratic House managers are finishing their opening arguments today.

Jay Sekulow, a member of President Trump's defense team, said their arguments on Saturday could be described as "a trailer, and a coming attractions."

"I think that you will see, I guess we would call it a trailer, and a coming attractions would be the best way to say it. And obviously, three hours to put it out, so we will take whatever time is appropriate in the three hours to lay out how the case is going to look like and next week is the full presentation," he told reporters during the break.