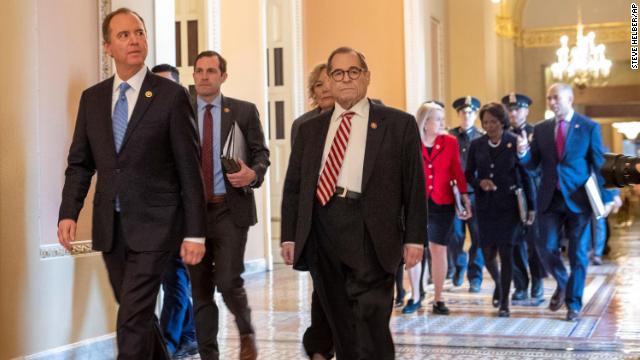 Democratic House managers took the Senate floor today for day two of their opening statements in the impeachment trial of President Trump.

In case you missed it, here are some of highlights from today's proceedings:

The Senate will convene tomorrow at 1 p.m. ET to resume the impeachment trial.

House managers are expected to wrap up their opening arguments. (They have roughly roughly 7 hours and 53 minutes left, according to the Senate Cloakroom.)

After that, here's what could happen next:

Sen. Marsha Blackburn joined Laura Ingraham on Fox News to discuss the exchange between her and Lt. Col. Alexander Vindman’s lawyer, who responded tonight to the Tennessee Republican's criticism of Vindman as a witness in the impeachment case.

On Twitter, Blackburn claimed Vindman, a Ukraine expert, had leaked the July 25 phone call at the center of the impeachment. This claim is unsubstantiated. Blackburn also tweeted that Vindman "wanted to take out Trump" while another tweet featured an alleged quote from Vindman's commanding officer calling him "a political activist in uniform."

"Here’s the thing, you have to look at what his commanders have said. He has a problem with his judgment. That's been pointed out. He had one commander who said he is a political activist in uniform. He has had problems with going outside of his chain of command which is exactly what he did here. I talk to a lot of military members on a regular basis. They have a real problem with some of the things and the manner in which he conducted himself in this matter. What we want to do is make certain that we get to the heart of the issues here," Blackburn said.

More on Vindman's role in the impeachment inquiry: Vindman told the House Intelligence Committee in October during a more than 10-hour closed-door deposition that he reported concerns about Trump's July 25 call with the leader of Ukraine to the top National Security Council lawyer within hours, and said some of the changes he tried to make to the since-published transcript were left out, though he didn't say why.

House managers have roughly 7 hours and 53 minutes remaining in their total allotted time of 24 hours to argue their case in the impeachment trial, according to the Senate Cloakroom.

They are not required to use the full allotted time and can yield back as much time as they want. There are no indications at this time of whether they will yield back any time.

At the start of proceedings on Thursday, Chief Justice John Roberts announced the time House managers had remaining and it’s possible he will again announce it at the start of Friday’s proceedings.

Three GOP senators were asked this evening on whether they heard anything today during the impeachment trial that makes them want to vote to bring in witnesses.

With the GOP controlling 53 seats to Democrats' 47, Democrats would need to win over at least four senators to vote to hear from witnesses in order to pass such a proposal.

Here's how each of the three Republican senators responded:

Democratic House manager Rep. Jerry Nadler spoke to reporters after the trial wrapped for the day and was asked if they were making an effective case to convince Republicans to convict President Trump.

“I think we’re making an airtight case for anyone who’s willing to listen,” he said. “The evidence is overwhelming. The President’s counsels have not offered any evidence against it, nor will they.”

The Democratic House managers continued to supplement their argument with video clips in day three of the Senate impeachment trial.

Ambassador to the European Union Gordon Sondland remained the most referenced testimony used to illustrate how President Trump was directly involved in a quid pro quo scheme with Ukraine.

Another addition to their visual presentation was a video of Trump and Ukrainian President Volodymyr Zelensky at a bilateral meeting in September, where Zelensky made clear his intentions to establish a close US-Ukraine relationship.

Here’s CNN’s tally of all the soundbites that were presented in today’s trial:

"Schiff is absolutely committed to making sure he changes his election in 2020 — he doesn’t want Donald Trump on the ballot," the Florida Republican said following the end of the impeachment trial today.

Where Scott stands on having trial witnesses: Yesterday Scott said he is "absolutely" open to having witnesses testify in Trump's Senate impeachment trial, a position that's at odds with many of his GOP colleagues who've pushed against having additional witnesses.

Scott's comments were especially notable given that he's hasn't widely been considered in the group of senators open to voting to hear from witnesses. That pool has mainly consisted of Republican Sens. Susan Collins of Maine, Lisa Murkowski of Alaska, Mitt Romney of Utah and Lamar Alexander of Tennessee, who is retiring at the end of his term.

With the GOP controlling 53 seats to Democrats' 47, Democrats would need to win over at least four senators to vote to hear from witnesses in order to pass such a proposal.

The House impeachment managers have concluded their second day of opening remarks in the impeachment trial of President Trump.

The trial will continue tomorrow at 1 p.m. ET, and Democrats will resume their opening statements.