House manager Val Demings framed the impeachment trial as being "about the American people" during her remarks this afternoon on the Senate floor.

"This moment is about ensuring that every voter whether a maid or janitor, whether a nurse, a teacher or a truck driver, whether a doctor or a mechanic, that their vote matters and that American elections are decided by the American people. President Trump acted corruptly," Demings said.

Demings took shots at Trump who she said "stood to benefit from the abuse of office."

“The only person who stood to benefit from the abuse of office and solicitation of these investigations was Donald Trump. The 45th President of the United States. A violation of public trust. A failure to take care that the laws be faithfully executed. But when it came down to choosing between the national interest of the country and his own personal interests, his reelection, President Trump chose himself," Demings added.

The House managers are relying heavily on video clips to make the case against President Trump. CNN tallied up all the soundbites that were presented at the trial yesterday.

Democratic House manager Adam Schiff accused President Trump of lying about his reasons for asking Ukraine to investigate his political rivals. Trump has said that his requests were part of a good-faith effort to root out corruption in a nutritiously crooked country.

Schiff wasn’t buying it, and rhetorically asked the senators: “Are we to really believe that this is about fighting corruption?”

The House impeachment inquiry uncovered substantial evidence to undercut Trump’s explanation that he only asked Ukraine to investigate former Vice President Joe Biden because he was genuinely worried about foreign corruption.

A US diplomat testified that US Ambassador to the European Union Gordon Sondland told him that Trump does not “give a shit about Ukraine,” and cared more about the Biden probe.

CNN fact-checked Trump in October, when he said, “this is about corruption, and this is not about politics."

Here’s a breakdown of Trump and his fight against "corruption":

As day three of the impeachment trial continues, senators have been seen pacing the Senate chamber, doodling, and flicking fidget spinners.

Many senators were standing at their desks, but Sen. Bill Cassidy, a Republican from Louisiana, was spotted pacing around the whole GOP side of the chamber, walking back and forth around the edges for at least 25 minutes.

Sen. Tom Cotton, a Republican from Arkansas, flipped a purple fidget spinner on his desk as other GOP senators watched.

Sen. Elizabeth Warren, a Democrat from Massachusetts, was seen stretching her neck, taking off her glasses and massaging the bridge of her before putting them back on. Sen. Dick Durbin, a Democrat from Illinois, leaned across an empty seat to whisper something to Sen. Chuck Schumer.

Sen. Richard Burr, a Republican from North Carolina, downed half a glass of milk on the Senate floor, while another half-full glass of milk was spotted on Democratic Sen. Tammy Baldwin’s desk. She was not observed drinking it, however.

House manager Adam Schiff, speaking on the Senate floor, said President Trump "is a president who truly feels that he can do whatever he wants."

On Trump's requests for investigation by Ukraine, Schiff said, "That includes coercing an ally to help him cheat. In an election."

He added: "And if he's successful, the election is not a remedy for that. A remedy in which the President could cheat is no remedy at all, which is why we are here."

During his remarks this afternoon, House manager Adam Schiff cited multiple witnesses from the impeachment inquiry and their positions on President Trump's request to Ukraine to investigate the Bidens.

"The consensus is once again clear, the President's demands for political investigations was improper, inappropriate, and wrong," Schiff said. "And again confirms that these requested investigations were not about anything except Donald Trump's political gains."

Here's a graphic that Schiff used to illustrate the witness testimony: 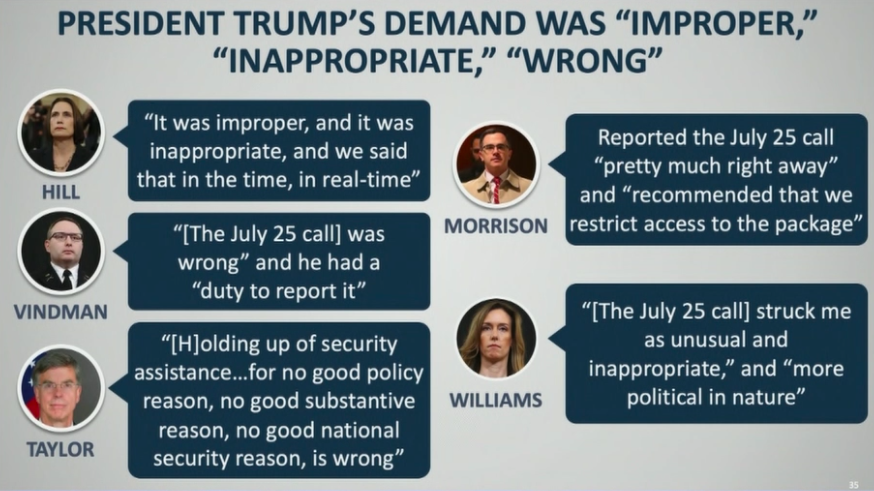 Eric Ueland, legislative director for the White House, said the defense will be ready to go when it’s their turn Saturday in the impeachment trial.

Asked what his preferences were for structuring the defense, Ueland said, “I’ll leave that to Pat and Jay, but we’re very prepared.”

About Trump's defense team: The team is made of longtime Trump attorney Jay Sekulow and Pat Cipollone, the White House counsel expected to lead the defense.

The team is rounded out with Ken Starr, the famed independent counsel who made the last impeachment case, against Bill Clinton, and Alan Dershowitz, who represented OJ Simpson and Jeffrey Epstein.

The Democratic House managers accused President Trump of parroting Kremlin talking points, by accusing Ukraine of interfering in the 2016 election.

The Kremlin has pushed this conspiracy theory to deflect attention from Russia’s own meddling in the 2016 election, according to witnesses who testified in the House impeachment inquiry and classified intelligence briefings given to senators.

This isn’t the only topic where Trump has aligned his public comments with Russian President Vladimir Putin. Since he entered the political arena, Trump has often broken from Republican orthodoxy and embraced Kremlin-friendly talking points, especially on foreign policy.

At one point during today's proceeding, House manager Jerry Nadler played a video clip of Republican Sen. Lindsey Graham's remarks during the Clinton impeachment in which he talked about his interpretation of what the framers of the Constitution meant by "high crimes."

"I think that's what they meant by high crimes, doesn't even have to be a crime. it's just when you start using your office and you're acting in a way that hurts people," Graham said in 1999 when he served as a House manager in the Clinton trial.

Why did he do this: According to CNN's Phil Mattingly, Nadler is "trying to make the point to rebut" the Trump team argument "that because a crime was not committed he cannot be impeached."

Mattingly reported that Graham was actually not in the chamber when Nadler played the recording, but a couple of Republican senators cracked some smiles. Sen. John Barrasso who sits next to Graham was seen patting the empty chair. When Graham returned "a couple senators were seen whispering to him about what had occurred."

The broader point is that it appears the Democrats' strategy is to, at times, cites Republican senators themselves. Mattingly points out these are "he same senators that are going to have to decide ... whether or not to vote to remove the president."