"It was just kind of the evidence and the chronology and the facts. It was long. It was pretty thorough," she told reporters.

CNN asked if they made the case for additional evidence, and Murkowski said: "There was certainly a lot of repetition," before she ducked into the Senate recording studio.

Why Murkowski matters: She's one of three GOP senators — alongside Susan Collins and Mitt Romney — who have signaled they will likely vote to consider witnesses and evidence.

If all 47 senators who caucus with the Democrats vote to have witnesses and evidence, they still need four Republicans to join them.

Senate Minority Leader Chuck Schumer said the case House managers are laying out bolsters the need to hear from witnesses at trail.

"I don't see how any senator, Democrat or Republican, could sit on the floor, listen to Adam Schiff and the House impeachment managers and not demand witnesses and documents," Schumer said. "Unless, that is, they're not interested in the truth, that they're afraid of the truth, that they know the President is hiding the truth."

Schumer introduced a series of amendments when the Senate debated the rules of the trial, requesting subpoenas for witnesses and documents. All of his amendments were tabled — or effectively killed — and Republicans have said they will consider adding witnesses after the opening arguments.

Senate Minority Leader Chuck Schumer praised Rep. Adam Schiff and the other impeachment managers on their opening arguments yesterday when they laid out the case against the President.

Here's how Schumer described it:

"It may have been first time that many of my Republican colleagues heard the full story, the complete narrative from start to finish, uninterrupted, and not filtered through the kaleidoscope lens of Fox News, where at best things are left out and at worst things are terribly distorted. It may have planted the first seeds in their mind that, yes, perhaps the President did something very wrong here."

The managers — the seven Democrats prosecuting the case against Trump — have 24 hours over the course of three days to lay out their case. Today will mark their second day.

"It has been only one day, but House managers are setting the bar very high for the President's counsel to meet," Schumer added. "At this point I'm not sure how the president's counsel as unprepared, confused and tending towards conspiracy theories as they have been can clear it."

Sen. Tom Carper, a Democrat from Delaware, said it’s his 73rd birthday today, and to celebrate before a long day of the impeachment trial, he began the day with a five-mile run to the Lincoln Memorial to get some inspiration.

“The key to our democracy is a system of checks and balances. We’re basically having a great trial, a great test for our democracy,” he said.

When asked about some senators not being in their seats, Carper said, “for the most part people are behaving well.” 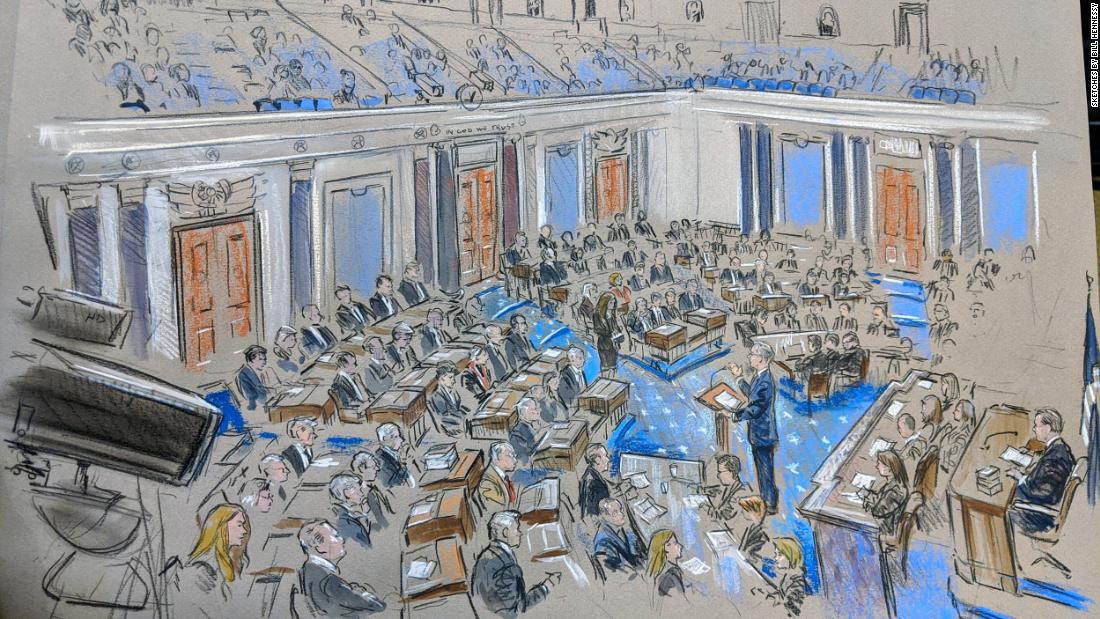 The TV footage you've been seeing of the impeachment trial is coming from cameras controlled by the Senate itself. Those cameras have been focused on the front of the Senate, where House Democrats have been making their case against President Trump.

The cameras haven't shown a lot of the Senate floor. But sketch artist Bill Hennessy has been in the room, drawing the scenes you can't see on TV.

Hennessy said the mood over all is "pretty serious" and "fairly tense" — but senators have gotten restless as the trial has progressed.

"Initially they were in their seats," he told CNN. "Pretty much every single one in their appropriate location, but as the presentation has taken place, and it has gone hours and hours, they started milling about a little more."

After a few hours of trial yesterday, "there were a lot of empty seats and some were standing, just standing behind their seats or wandering about, and then it seemed a lot of them kind of wandered out," he said.

President Trump’s impeachment trial continues in Washington today, but The Brief’s Bianca Nobilo has been keeping track of the day’s headlines outside Capitol Hill.

As House managers argue intensely about the need to hear from key witnesses at the Senate trial, a source familiar with the process tells CNN that the President’s allies are already working hard behind the scenes to lobby wavering GOP senators to oppose any witnesses.

This effort includes calls from members of the President’s team and allies on Capitol Hill. They're also identifying people that the senators trust and respect from a wide variety of places, including back home, and getting them to call.

The specific arguments against witnesses vary depending on who the senator is and what their concerns are, CNN is told.

GOP Sens. Susan Collins, Lisa Murkowski and Mitt Romney have signaled they will likely vote to consider witnesses and evidence.

If all 47 senators who caucus with the Democrats vote to have witnesses and evidence, they still need four Republicans to join them.

The three had nothing to say, substantively, about the first day of the House manager presentation. That’s unlikely to change any time soon, as all three plan to keep their observations quiet until after the presentations are complete.

The question remains: Who, if anyone, is the fourth?

The only TV coverage of the impeachment trial so far has been from cameras controlled by the Senate itself.

That means the public hasn't actually seen many of the senators, the gallery overlooking the Senate or other parts of the chamber during the trial. But Sketch artist Bill Hennessy has been in the Senate chamber.

He's capturing the moments the TV cameras haven't shown, like when a protester briefly interrupted the trial last night: 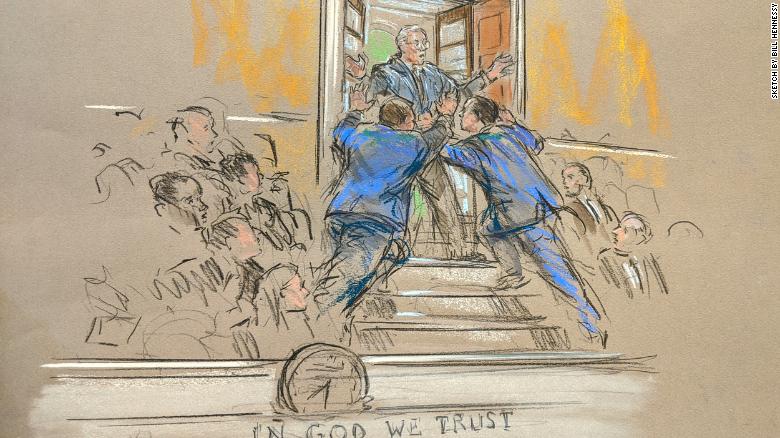 Or the senators who have gotten up from their seats to stand in the rear of the chamber: 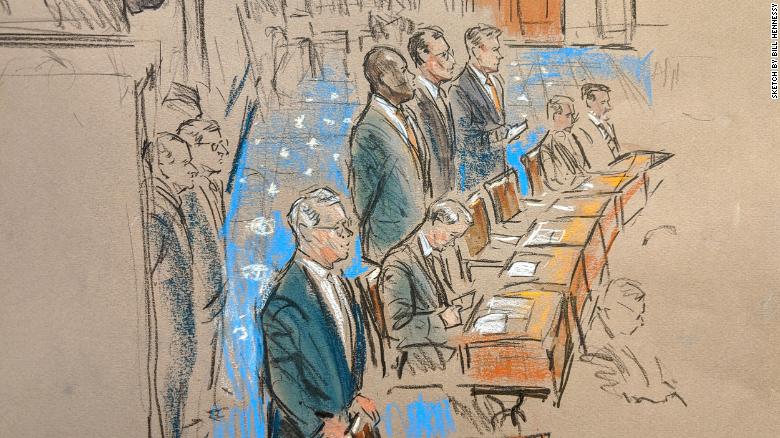 Here's Sen. Marco Rubio during the trial on Tuesday: 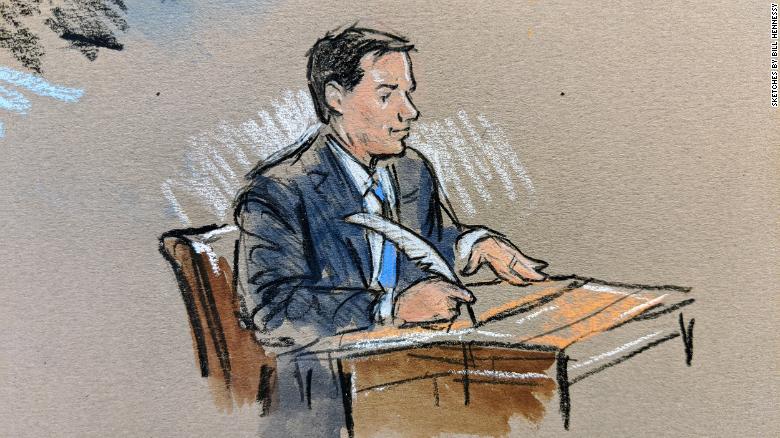