Sen. Tom Cotton was spotted earlier today drinking two glasses of milk with some chocolate he was sneaking from under his desk.

Surprisingly, milk and water are the only beverages allowed on the Senate floor during the impeachment trial.

So why milk, and not coffee? The reason is simple: It was designed to help senators with ulcers.

According to Alan Frumin, the former Senate Parliamentarian and CNN contributor, a precedent from Jan. 24, 1966, stated, “Senate rules do not prohibit a Senator from sipping milk during his speech.”

Frumin said this is a “precedent” and not a formal “rule” of the Senate.

GOP Sen. Bill Cassidy of Louisiana, who is a physician, said the practice was started to aid senators suffering from peptic ulcer disease because “way back when, in the ‘50’s” there was no treatment for the condition other than drinking milk.

“There was no medicine for peptic ulcer disease so people would drink milk and so the senators were allowed to drink milk because they had ulcers,” he said.

Cassidy said all senators know they can’t bring outside drinks on the floor. But once there, sparkling water is also served in addition to water and milk.

He said snacks and coffee are available in the cloakroom but the coffee is “as a rule awful.”

“It’s miserable coffee. You would wish it on a Democrat but no one else,” he said. “Just joking.”

House Impeachment managers have been presenting their opening arguments today.

Here's a breakdown of where the House Democrats, Trump's legal team and other key impeachment trial players are sitting: 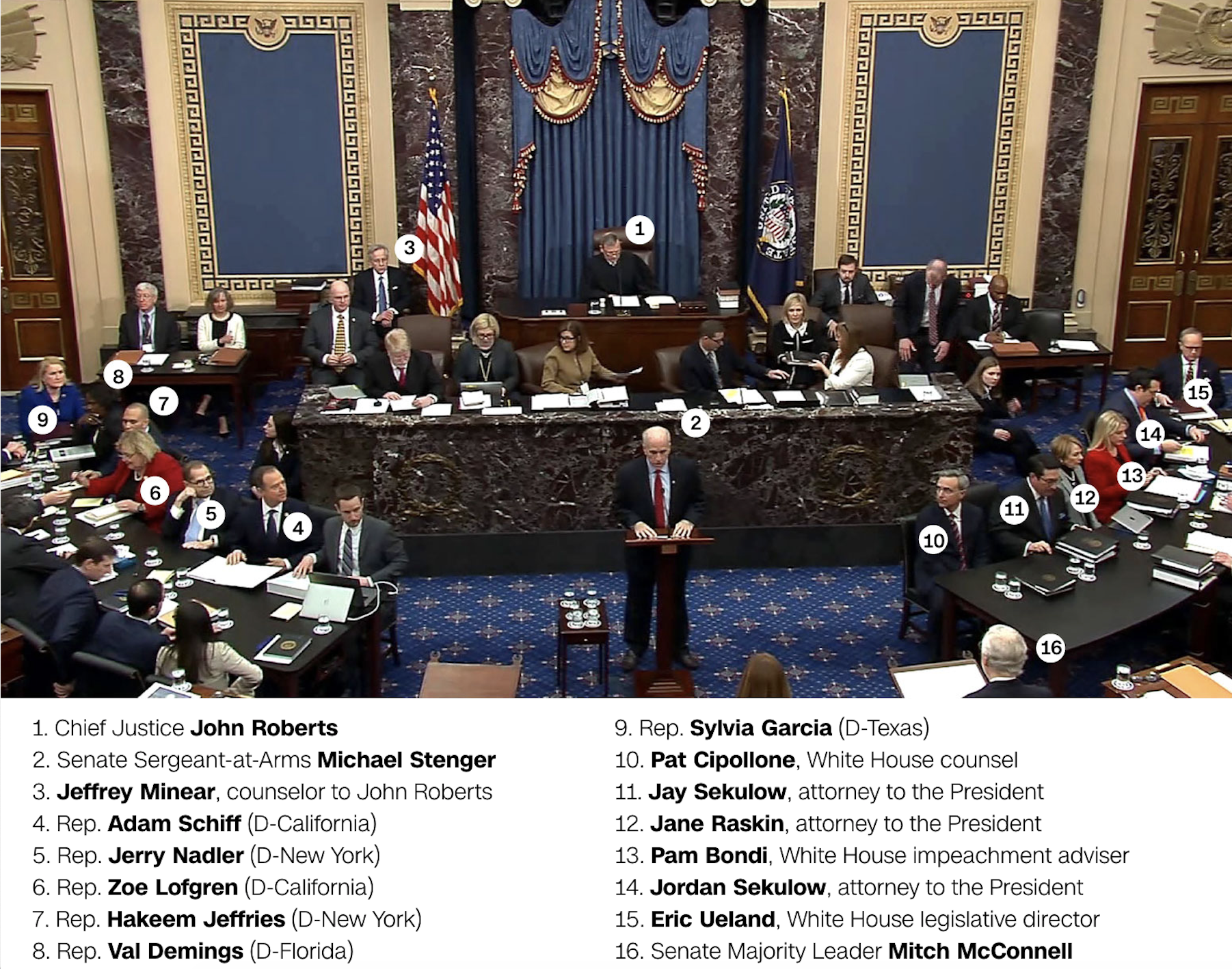 There are more signs that GOP senators are not budging on allowing subpoenas for witnesses and documents.

After listening to House managers now, Sen. David Perdue, a close ally of President Trump, made clear he won't get behind witnesses sought by the House. He said there's a "bright line" between former President Bill Clinton's impeachment case and the Trump case since the three witnesses who were deposed in the 1999 Senate trial had previously spoken to investigators.

"There had been three witnesses in the Clinton trial had already been deposed … It was not new material. That was a bright line in my view," Perdue said.

He added that the Senate is "supposed to rule on their case, not build their case for them."

Sen. Mike Braun, a freshman and Indiana Republican, said he would only get behind a deal for witnesses that is "reciprocal."

Asked about issuing subpoena for documents, Braun said, "Those would be a whole lot less important than witnesses because we are getting flooded with information on documents. I think the only thing that would make a difference beyond mostly what we heard anyway would be just live witnesses."

Sen. Amy Klobuchar said he has she felt a “shift in tone” today, after last night.

“I thought that we really started getting down to the facts and the bread and butter of the case. And that's a good thing to do because we're going to keep trying to get the evidence," she told reporters.

Asked about President Trump’s comments that he would like to be in the chamber himself, Klobuchar said, "Why doesn't he let his people come and testify? Why doesn't he testified? None of this has happened, and not getting any testimony, because they're not letting witnesses come."

She was asked about the amendments on allowing witnesses — all of which were tabled yesterday.

“That's why they are a juror, and they better start acting like a juror, and a juror should want witnesses and evidence in order to make a good decision,” she added.

Senate Majority Leader Mitch McConnell has called for a 30-minute dinner break to be taken at 6:30 p.m. ET.

What's happening right now: Rep. Jason Crow is presenting the Democrats' opening argument in the impeachment trial of President Trump. Crow is one of seven House impeachment managers selected to present their case.

As Rep. Adam Schiff presented the Democrats’ case today, senators on either end of the political spectrum were seen taking notes, snacking and, on one occasion, filling out a crossword puzzle.

Republican Sen. Mike Lee, of Utah, was fiercely taking notes filling up three full pages in his notebook over the hour.

When Schiff presented video evidence, Lee physically turned his head back at the presentation at least five times seemingly to copy down accurate notes. Lee was seen later chugging a glass of water and massaging the palm of his writing hand.

In contrast, Lee’s neighbor, Sen. Rand Paul, of Kentucky, focused intensely on a crossword puzzle, not so sneakily hidden between his papers.

Sen. Kirsten Gillibrand, a Democrat from New York, silently took out a red and grey patterned scarf and wrapped it around her neck. Sen. Joni Ernst, a Republican from Iowa, looked comfortable with a blue sweater of sorts draped over her legs like a cover.

Noises of what sounded like a plastic bag were heard all the way in the press seats above the Senate floor from Republican Sen. Ben Sasse’s general direction. He was spotted shoving unidentified pieces of food into his mouth. When Sasse, of Nebraska, realized reporters were staring at him — he and Republican Sen. Rick Scott, of Florida, stared back, giggling. Sasse then pulled out a clementine from under his desk and offered it to Scott, who jokingly motioned to reporters with a big shrug and crossing arm movement that no, he did not want the clementine or other snacks.

Sen. Tom Cotton, a Republican from Arkansas, slowly pulled open his desk drawer to file away some notes — and about 10 pieces of candy were seen scattered around, including four mini Hershey bars, some Skittles and other snacks.

Democratic Sen. Tom Kaine, of Virginia, and Sen. Angus King, of Maine, were seen chatting back and forth.

House Democrats' began giving their opening arguments around 1 p.m. ET today. Several hours in, and some senators have started to wander from their seats.

Around of 3 p.m. ET, the seats were mostly filled in the chamber with very few empty seats or anyone out of the chamber. But 20 minutes later — not long before the trial went into a recess — CNN counted 17 empty seats across the entire chamber, on both sides. Most of the empty seats were on the Republican side, but there were also empty seats on the Democratic side.

Some senators at this time were out of their seats but still visibly in the chamber, standing at the back of the room, which is something a number of senators did yesterday as well, especially as it got later into the night.

Some of those standing during this time were Republican Sens. Roy Blunt and John Barrasso and Democratic Sens. Cory Booker, Chris Murphy and Richard Blumenthal. This was while House manager Adam Schiff was speaking.

Crow is one of seven House impeachment managers selected to present their case. Moments before, Rep. Sylvia Garcia was up.

Reps. Adam Schiff and Jerry Nadler have also made opening arguments before the Senate today.

Senator John Cornyn, a Republican from Texas, told reporters this afternoon he thinks the House Democratic managers are getting repetitive.

When asked if Cornyn already had an idea of how he was going to vote on the articles of impeachment, he said he's "still waiting to hear the presentation of the case. I think I owe that to the parties. That’s the oath we take.”

Cornyn continued: “So far, I think, the House managers are undermining their own case by saying, this was a request for an investigation that was never done and oh, by the way, the President didn’t want it anyway. And just by requesting an investigation that wasn’t done and wasn’t really desired, that represents foreign interference in an election against a potential but undetermined rival? The logic is, you’ve got to struggle a little bit to keep up with the train of thought there, but we’re going to keep an open mind.”

Cornyn went on to call impeachment a "nuclear option."

"This is something we should not do unless that constitutional standard is met, and I’m struggling to see how that is even close," he added.