Senate Minority Leader Chuck Schumer told reporters that there is no way he’d trade Hunter Biden for the GOP witness in order to get John Bolton to testify for the Democrats. He said that is not on the table.

“I think that is off the table. That trade is not on the table,” he said.

Asked whether he thought House manager Jerry Nadler’s comments early Wednesday morning were appropriate, Schumer said he thought Chief Justice John Roberts dealt with the issue, and he talked generally about the arguments made. He wouldn’t comment further on Nadler specifically.

“I’ve said all I’m going to say, “ he told reporters when pressed again on Nadler.

Schumer also applauded his GOP colleagues who fought to change the resolution so each side would have three days instead of two to make the case. Schumer said it was 100% evidence that Republicans could eventually be moved to support more witnesses and documents.

Some background: Roberts scolded both the Democratic House managers and the President's defense team early Wednesday morning after a contentious exchange on the Senate floor.

Roberts had just listened to the impeachment managers and Trump's legal team rip into each other after Nadler made the case for issuing a subpoena for former national security adviser John Bolton's testimony.

During that argument, Nadler accused Republican senators of "voting for a coverup" by killing amendments for documents and testimony of additional witnesses.

That led to White House counsel Pat Cipollone firing back during his own remarks: "The only one who should be embarrassed, Mr. Nadler, is you. For the way you addressed this body. This is the United States Senate. You're not in charge here."

House impeachment manager Jerry Nadler is continuing to give the Democrats' opening statement, picking up from House manager Adam Schiff, who began outlining the case earlier this afternoon.

The Democratic House managers get 24 hours over the course of three days to give their opening arguments.

Jay Sekulow, one of the lawyers on President Trump's legal team, urged House manager Adam Schiff and Democrats to proceed with their case because he said the opening statement "undercuts their entire argument."

"We just went through two and a half hours of laying out their case to go with the 11 hours laying out their case last night. Now unless he's making it up, it seems like he's got a lot of information, so proceed with your case. The more they do this two and a half-hour events at a time, it undercuts their entire argument, but you know what, that's going to be ultimately for the United States Senate to decide," he said.

Sekulow continued: "Look, they're putting on their case. The good news is we only have 22 hours more to go of their side and we'll go. Let them put their case on and we'll continue."

Asked if Trump's defense team will use the full 24 hours for their opening arguments, Sekulow said, "I can't make any determinations as to how long our proceedings are going to go, we got to base it on what they do." 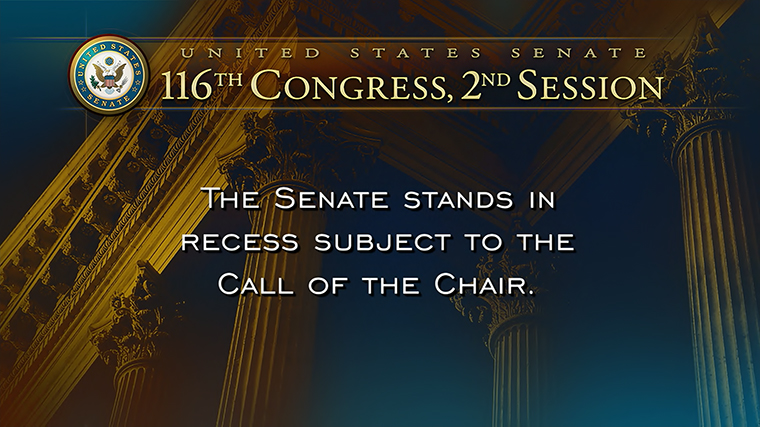 House manager Adam Schiff spoke for two and a half-hours during the Democrats' opening statement, which will resume after the break.

It’s day two of the Senate impeachment trial, and senators have a list of rules they must follow.

Prior to the start of the trail, a joint letter was released from the Senate outlining the guidelines for behavior while the trial is in session.

These behavior guidelines include a ban on phones and electronics in the room, and note that those devices should be left outside the Chamber.

Senators are also required to sit silently and not speak to their neighbors while the trial is in session, and they are not to read any materials that do not relate the matter being presented.

The guidelines say that senators must refer to Chief Justice John Roberts as “Mr. Chief Justice,” and remain silent as he enters and exits the trial.

Here's a look at all the rules: 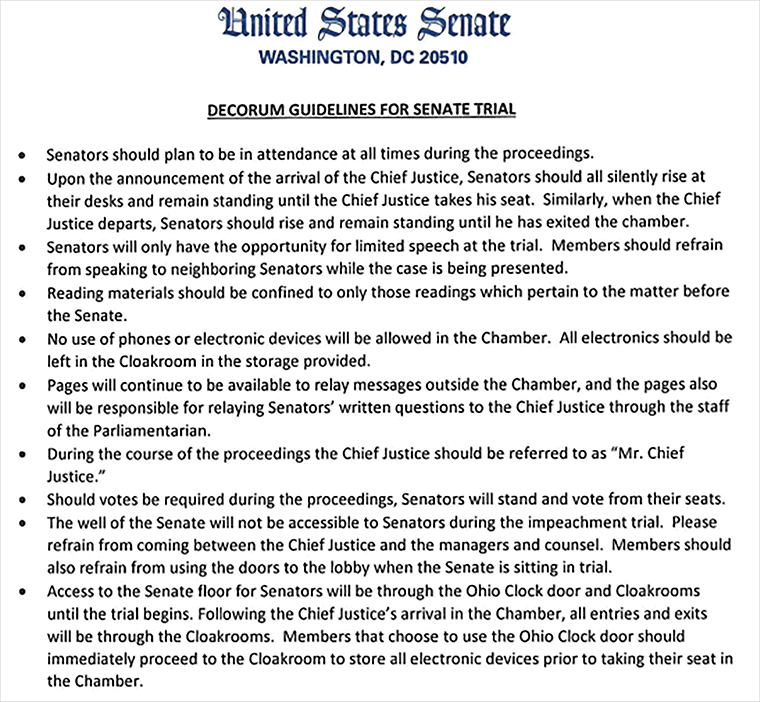 Rep. Adam Schiff, the top House manager, rebuked President Trump today for claiming that he can’t even be investigated while in office.

Schiff is accurately describing Trump’s position, which has been argued in federal court by Trump’s lawyers and the Justice Department. One of Trump’s lawyers even said he couldn’t be investigated for murder if he shot someone on the streets of New York City.

But several federal judges have ruled against these sweeping claims of immunity. A federal appeals court in New York said in November, "presidential immunity does not bar a state grand jury” from investigating “potential crimes committed by persons within its jurisdiction, even if that investigation may in some way implicate the president."

What happens next regarding Trump's immunity: The Supreme Court will likely get the final word on the matter. They agreed to take up some of these cases involving Trump and immunity. But there’s no guarantee that the justices will hand down a decision that addresses all of Trump’s claims – they could rule narrowly.

Schiff and other Democrats have criticized Trump for simultaneously claiming that he can’t be criminally investigated, while also blocking witnesses and documents from congressional impeachment investigations.

Nearly two hours into a presentation from Rep. Adam Schiff on the Senate floor, President Trump has tweeted from aboard Air Force One.

“NO PRESSURE,” he wrote, the phrase itself in all-caps and quotation marks, apparently referring to his interactions with Ukraine regarding aid and investigations.

House impeachment manager Adam Schiff has been delivering his opening remarks for about two hours now.

The seven House managers — the Democrats who are prosecuting the case against President Trump — get 24 hours over the course of three days to make their case.

For those keeping score: That means we have 22 hours left to go between now and Friday.

After the Democrats finish, Trump's legal team will also get 24 hours over three days — likely Saturday, Monday and Tuesday — to make their opening arguments.

During his opening remarks, House manager Adam Schiff delve into the decision to withhold security assistance to Ukraine.

"Clearly, Donald Trump felt the Ukrainians owed him," he said.

Schiff made the comments after playing a video clip of testimony from Ukrainian diplomat Bill Taylor recounting a conversation he had with Ambassador Gordon Sondland about how Trump was acting like a "businessman" in his dealings with the Ukrainians.

Schiff added that the aid money was not Trump's money.  "That's your money. That's the American people's money for their defense," he said