Republican Sen. Mitt Romney told CNN that Democrats are making a “mistake” by saying that “everything is an outrage.”

The Utah lawmaker said Senate Majority Leader Mitch McConnell's changes from rules in former President Bill Clinton's trial are “modest” and he won’t be voting today on motions to call for witnesses.

He maintained that witnesses should be dealt with after opening arguments and said he still wants to hear from John Bolton.

There's been a lot of talk about the trial rules used in Bill Clinton's Senate impeachment trial — and how they stack up to the ones proposed for Trump's trial.

Let’s make something abundantly clear: the McConnell resolution is not the 1999 Bill Clinton impeachment trial resolution. It just isn’t. It isn’t “very, very similar.” It isn’t a few word changes. There are substantial differences.

It’s modeled in a very similar fashion, and the time permitted and opening stages of the trial are in line with it. But it’s just not the same, or even “very, very similar.”

Here's the side-by-side look at how they differ: 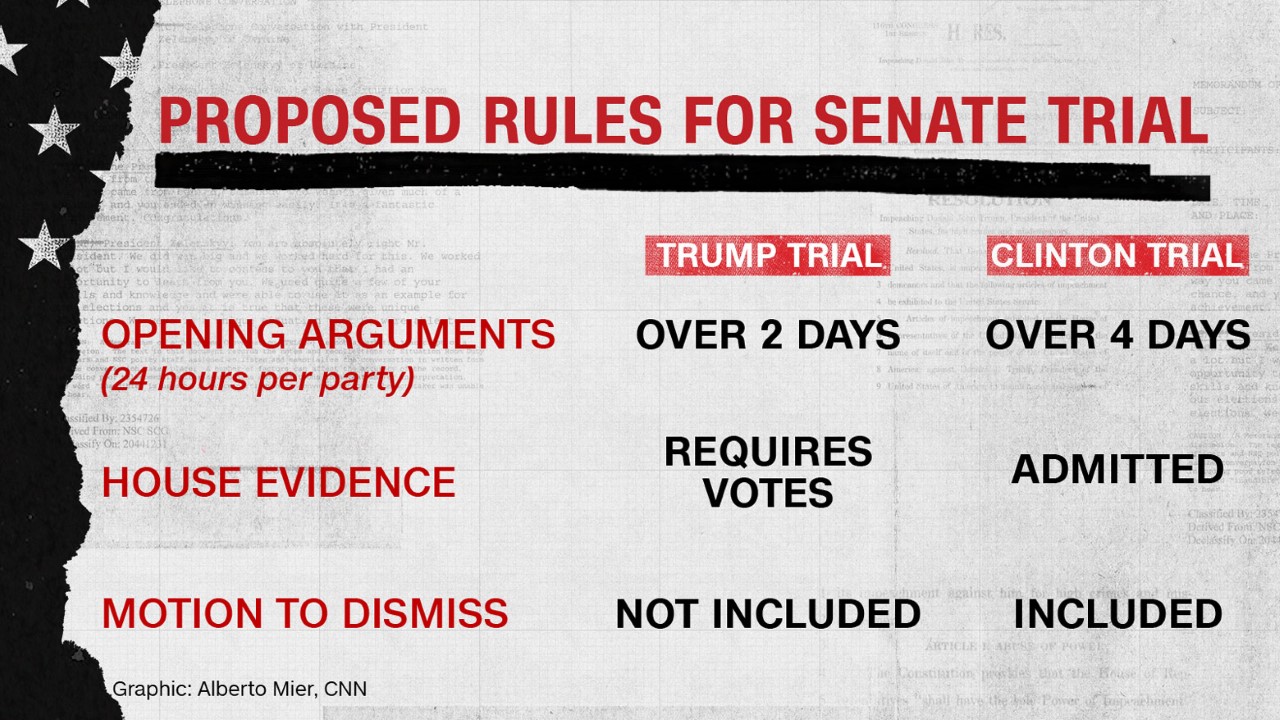 House Judiciary Chairman Jerry Nadler, who is also an impeachment manager, said White House Counsel Pat Cippolone should be recused from the Senate trial because he is a fact witness.

Some background: Earlier today, the House managers sent a letter accusing Cipollone of being a "material witness" and demanded that he hand over any information to which he has "first-hand knowledge."

The managers also wrote that Cipollone's role on the defense team could "undermine the integrity of the pending trial."

"We're not going to try to be dilatory and have 100 amendments just to delay things," he said.

That's when a reporter asked: "How many amendments?"

"Oh, you're persistent," Schumer said, without answering the question.

What this is about: Today, the Senate will take up McConnell's resolution on the trial rules. After an initial two hours of debate, amendments can be offered. After each amendment is read, the House managers and White House defense team will each have an hour to argue their side of the resolution. Either or both sides can yield back their time at any point.

The amendment process will repeat until Schumer is done offering amendments, at which point the chamber would move to a vote on McConnell's underlying resolution.

The length of today will be dictated by how many amendments Schumer chooses to propose. While his team has been tight-lipped about how many that will be, Schumer forecasted a "series of amendments" to reporters last night. The bottom line: it could be a long day.

Impeachment news is dominating Washington, but The Brief’s Bianca Nobilo has been keeping track of the day’s headlines outside Capitol Hill.

Sen. Bernie Sanders has cancelled his rally at the University of Northern Iowa today due to the impeachment schedule, according to a campaign press release.

Sanders is one of four senators running for President. The others are Michael Bennett, Amy Klobuchar and Elizabeth Warren.

"Immediately after Leader McConnell introduces his resolution, I will be offering amendments to fix its many flaws. The first amendment I will offer will ask that the Senate subpoena White House documents related to the charges against the President," Schumer said.

He did not say how many other amendments he'll offer — but said there will be a "series" of them.

"I will then offer a series of amendments on the documents we requested, the witnesses we requested, and amendments to fix the most egregious departure that McConnell made in his resolution from the Clinton rules," he said.

Senate Democratic Leader Chuck Schumer criticized Majority Leader Mitch McConnell's plan to have the trial's opening arguments go into the wee hours of the night, asking, "If the President is so confident in his case, then why won't he present it in broad daylight?"

"The McConnell resolution will result in a rushed trial with little evidence in the dead of night," Schumer said. "If the President is so confident in his case, then why won't he present it in broad daylight? If Leader McConnell and the Republican senators who have said 'he's done nothing wrong, it's perfect,' why not while the sun is shining? Instead of at 2:00 a.m.? Well, it's pretty obvious. Pretty obvious why not."

Schumer said that if McConnell's rules are adopted, it will be a "dark day" for the Senate.

"On something as important as impeachment, McConnell's resolution is nothing short of a national disgrace. And it will go down in history as one of the very dark days of the Senate," he said.

About McConnell's planned rules: Yesterday, McConnell unveiled a trial plan that would give each side 24 hours over two days to present their side. The trial is expected to begin at 1 p.m. ET each day — meaning arguments could go until 1 a.m. ET, or later if there are breaks.

He added: "Simply executed by Leader McConnell and Senate Republicans. It appears that Leader McConnell decided to go along with the President's desire to cover-up his wrongdoing, hook, line and sinker."