Sen. Mike Braun, a Republican from Indiana, told reporters that many Republicans didn’t read through the resolution closely last night — so at the GOP lunch today there was a lot of discussion surrounding the amount of time for opening arguments and the handling of evidence already laid out from the House.

“I think that most of us didn't really have time to really look at the resolution closely and when we did, we thought that submitting evidence from House proceedings would be a good thing," he said.

Senate Majority Leader Mitch McConnell made some key last minute changes to the Senate trial organizing resolution today, including that evidence from the House would be submitted into the trial record unless there’s a vote to oppose, and time for opening arguments would be extended from two days to three.

In addition to Republican Sen. Susan Collins, who voiced support for witnesses, Braun felt there was “pretty broad agreement” on the idea that “when it came to any information that any evidence has already been heard in the House that just gets accepted into the record.”

Braun also said that while originally he thought it would be a good idea to tough it out and sit through opening arguments in a compressed timeline – by 5:30 p.m. today he said: “I don’t think I’d be as apt to say I could sit through 12 to 14 hours or whatever that might be.”

He added that he felt that way, in particular, because the subject matter “we’ve all heard” and it feels like it’s going “slowly” at this point.

He said that issuing a subpoena for Bolton is “not right” since the House forwent their opportunity to call him to testify during their trial.

The House, Cipollone said, “never subpoenaed Ambassador Bolton, … and they withdrew the subpoena for Charles Kupperman. And they ask you to issue a subpoena for John Bolton. It’s not right,” he said

He yielded the remainder of his time to the President’s outside counsel, Jay Sekulow.

Sen. Mazie Hirono, a Democrat from Hawaii, blasted the President's legal team and their arguments during the break,

"All this talk about, ‘Oh, they're asking the Senate to do the Houses’ job.’ That's just BS. It makes my head spin."

Asked how she’s spending her time during the trial so far, Hirono replied that she’s listening very carefully and taking notes.

We're almost five hours into the first earnest day of the Senate impeachment trial. House impeachment managers, who are prosecuting the case against Trump's case, and the President's defense team have been debating the proposed rules for the trial.

If you need to catch up on all the faces on the Senate floor, here's your annotated run down: 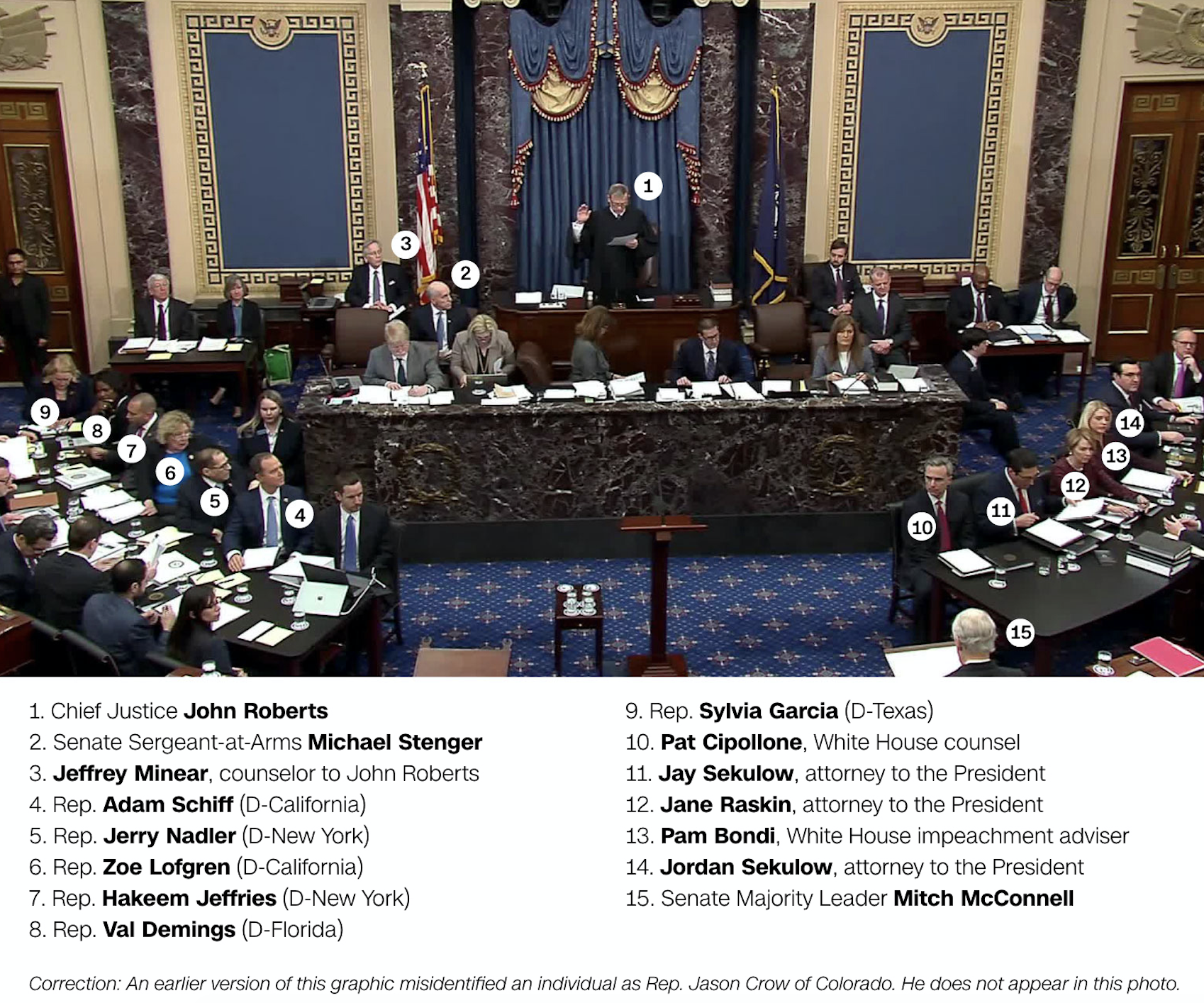 Many senators are taking notes at their desks while Democratic House manager Val Demings is speaking.

It's unclear if they’re taking trial notes or writing on an unrelated topic.

While the sergeant at arms announces at the start of each day that senators face the “pain of imprisonment” for talking during the trial, senators are managing to sneak quick comments in with a hand over their mouths as they lean in to their neighbors.

Florida Rep. Val Demings, one of the Democratic House managers, is now highlighting new information that came to light last week from Lev Parnas, the Soviet-born businessman who worked with Rudy Giuliani on the Ukraine pressure campaign.

Arguing that the Senate should subpoena the State Department, Demings pointed to a February 2019 text message where Giuliani told Republican lawyer Victoria Toensing that he was going to talk to Secretary of State Mike Pompeo about removing the US ambassador to Ukraine. (Trump later removed the diplomat, Marie Yovanovitch, from her post, amid a flurry of public allegations from Giuliani and his allies in conservative media, who falsely accused Yovanovitch of being an anti-Trump partisan.)

House investigators only got those text messages last week, after Parnas complied with a months-old subpoena. Parnas was indicted in October on campaign finance charges, and recently secured approval from a judge to share the documents.

Demings also aired a clip of Parnas’ interview with MSNBC where he talked about the pressure campaign. Parnas also sat down for a wide-ranging interview with CNN, and said he tried to intimidate Ukrainian officials at the direction of Giuliani and Trump.

Rep. Val Demings, one of the Democratic managers, wasted no time while arguing in favor of subpoenaing the State Department, by highlighting some of the most damning text messages that were uncovered during the House impeachment inquiry.

The Trump administration defied the subpoenas but some of the witnesses who cooperated brought their own documents. One of those witnesses was former US envoy for Ukraine Kurt Volker, who provided his text messages to Congress early in the inquiry.

One of the most shocking texts, between Volker and the top US diplomat in Ukraine Bill Taylor, seemed to confirm that the Trump administration was withholding nearly $400 million in US military aid from Ukraine, exchange for political favors for Trump.

"As I said on the phone, I think it's crazy to withhold security assistance for help with a political campaign," Taylor texted Volker on Sept. 9, in a group chat that also included US Ambassador to the European Union Gordon Sondland, another key player.

When Taylor testified publicly in November, he said, “The Ukrainians did not owe President Trump anything and holding up security assistance for domestic political gain was crazy, as I had said in my text message to Ambassadors Sondland and Volker.”

Why this matters: Demings and the other Democratic House managers argued today that the emails that were obtained during the impeachment inquiry make it clear that there is more relevant information out there, but the Trump administration is blocking it.

The Senate already voted along party lines to kill a Democratic amendment to subpoena the White House, and will likely kill the proposed State Department subpoena as well. Republicans have stayed united to oppose any subpoenas for new witnesses or documents at this point, though some of the more moderate Republicans say they’re open to subpoenas later in the process.

Democratic House manager Val Demings argued today for the release of documents from the State Department.

"They would help complete our understanding of how the President's scheme unfolded in realtime. They would support the conclusion that senior Ukrainian officials understood the corrupt nature of President Trump's demand and they would further expose the extent to which Secretary Pompeo and Mick Mulvaney and other senior Trump officials were aware of the President's plot and helped carry it out. We are not talking about a burdensome number of documents," she said.

Demings continued: "We are talking about a specific, discrete set of materials held by the State Department. Documents that the state department has already collected in response to our subpoena, but has never produced. We know that these materials exist. We know that they are relevant, and we know the President is desperately trying to conceal them."

There are signs senators are getting restless — or that the Senate is remarkably like seventh grade.

Sens. Tim Scott and Ben Sasse are digging into Sasse’s stash of candy – jawbreakers – whispering to each other and trading notes back and forth. At one point, Sen. Bill Cassidy stopped his note-taking to pass a note to Sasse, who added something to it and passed it on to Scott.

When House Manager Adam Schiff said on the floor, “Let’s get this trial started, shall we?” he looked directly at White House counsel Pat Cipollone, who briefly met his gaze, then looked away.

Senators are also acutely aware of the alphabetical order when voting, standing up before their name is called.

There was also visitors from the House side: Reps. Mark Meadows, Lee Zeldin and Louie Gohmert all entered the chamber and watched from the back.

There are rumors that some senators have gone onto the floor wearing Apple watches. It’s possible that Senator Tim Scott is wearing one, though not completely clear from our vantage point.