The resolution to appoint and authorize the House impeachment managers for the Senate trial has been released.

The House is expected to vote in the next hour on the resolution.

Here's a look at the first page: 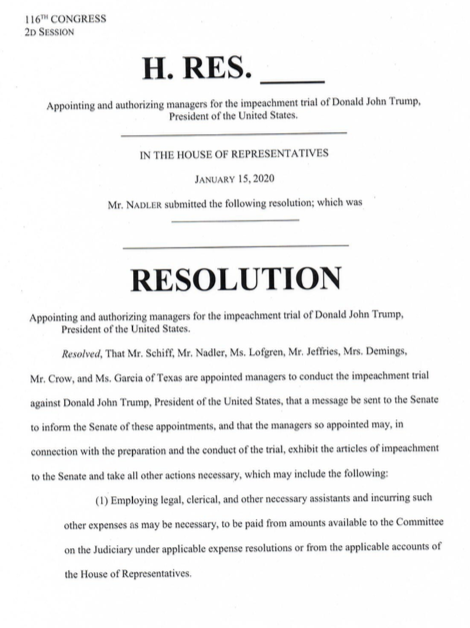 As of last night, the White House had not made a final decision about whether to include some of President Trump's most ardent Republican defenders in his Senate impeachment trial, multiple people said.

President Trump has wavered on the crucial decision, torn between advice from Sen. McConnell and his own instincts to have his fiercest defenders on the Senate floor.

The expectation is that the final decision will be made today or tomorrow, as they were waiting to see what Pelosi would do today.

Remember: It has been incredibly fluid, with arguments going back and forth. So nothing is final until it's announced, but one person said as of last night, the White House was leaning against including them.

John Roberts, the chief justice of the Supreme Court, will preside over the trial, and senators are instructed that they must be in attendance for all proceedings.

White House press secretary Stephanie Grisham said in a statement this morning that "the naming of these managers does not change a single thing."

"President Trump has done nothing wrong. He looks forward to having the due process rights in the Senate that Speaker Pelosi and House Democrats denied to him, and expects to be fully exonerated."

Senate Majority Leader Mitch McConnell again attacked House Democrats over impeachment as he spoke on the Senate floor this morning.

He said the House "rushed through the least thorough and most unfair impeachment inquiry in American history."

"They took just 12 weeks," he said, according to a copy of his prepared remarks. "There was more than a year of hearings before the impeachment of President Nixon. There were multiple years of investigation for President Clinton. When people are serious about compiling evidence and proving a case, these things take time."

McConnell said Speaker of the House Nancy Pelosi has "taken our nation down a dangerous road."

"This grave process of last constitutional resort will be watered-down into the kind of anti-democratic recall measure that the founding fathers explicitly did not want," he said.

Speaker of the House Nancy Pelosi just named the seven House Democrats who will prosecute the case against President Trump at the Senate trial. This was an important moment because it marked another step closer to the official start of the trial.

Here's what else we're expecting today —and in the days ahead:

House Judiciary Chairman Jerry Nadler said they are "prepared" if Senate Republicans try to call Hunter Biden as a witness during the impeachment trial.

He added that he does not see Biden as a relevant witness.

"Let me say, we are prepared, but the relevant question is relevance. Is relevance. In any trial, you call witnesses who have information about the allegations, about the charges."

Nadler said Biden has "no information" and is "not a relevant witness."

"Any trial judge in this country would rule such a witness as irrelevant and inadmissible," he added.

More on this: Hunter Biden's position on the board of Ukrainian energy company Burisma has been at the center of debate throughout the impeachment inquiry. Neither Hunter Biden nor his father, former Vice President Joe Biden, has been found to have committed any wrongdoing.

President Trump tweeted about impeachment just moments after Speaker of the House Nancy Pelosi announced the seven Democrats who will prosecute at the impeachment trial.

"Here we go again, another Con Job by the Do Nothing Democrats. All of this work was supposed to be done by the House, not the Senate!" he tweeted.

Some context: Democrats have asked for witnesses at the Senate trial, even though the House approved articles of impeachment without hearing from some key White House witnesses. Republicans, such as Senate Majority Leader Mitch McConnell have said the investigation phase of impeachment is the House's job — not the Senate's.

More on documents: House Democrats unveiled new evidence yesterday that they plan to send to the Senate as part of their case to remove President Trump from office.

The evidence includes text messages and hand-written notes from an indicted Rudy Giuliani associate that add more details about the push for Ukraine to announce an investigation against Trump's political rivals.

The documents show how the associate, Lev Parnas, sought to set up a meeting between Giuliani and Ukrainian President Volodymyr Zelensky and connect with members of his government. The records also add more details about the push by Giuliani to seek the ouster of the then-US ambassador to Ukraine, Marie Yovanovitch.