“We’ve been anxious to get started for the last — how many weeks has it been now? And we’ll get about it as soon as we can," he said.

Earlier today, House Speaker Nancy Pelosi signaled there will be a vote next week on appointing impeachment managers and transmitting articles of impeachment to the Senate. The House approved two articles last month, but had held onto them.

Asked it if was important to get a trial done before Trump's State of the Union in February, McConnell said: “Well look, we’re just getting started and I’m glad we’ll have the opportunity to do it. It’s been a long wait and I’m glad it’s over.”

Asked if he has reached out to Speaker Pelosi, McConnell said, “Not really." He then smiled and said nothing as the elevator door closed.

An aide later clarified that he hasn’t spoken to Pelosi.

“Senate Democrats are ready for the trial to begin and will do everything we can to see that the truth comes out," he said in a short statement.

What we know: House Speaker Nancy Pelosi signaled today that there will be a vote next week on appointing impeachment managers and transmitting articles of impeachment to the Senate.

The timeline for the Senate trial mostly depends on the House's actions next week.

If the House votes by mid-week on House managers for the Senate impeachment trial and transmits the articles shortly after, the timeline for the Senate trial is shaping up to look like this:

Here's why: That’s because the President’s lawyers and the House managers will have to file their briefs. Operating under the model used at former President Bill Clinton's impeachment proceedings, trial arguments could then begin Tuesday, Jan. 21. (Monday would be a federal holiday honoring Martin Luther King Jr. That means lawmakers may get day off, but the rest of their recess that week will be canceled.)

Several House Democrats today defended Speaker Nancy Pelosi's decision to delay the articles of impeachment, even as many were eager for a quick resolution to the weeks-long impasse.

Republicans believe President Trump could be acquitted by the time of his Feb. 4 State of the Union address, giving him a huge platform to tout the outcome before a nationally televised audience, according to GOP sources involved in the planning.

The schedule detailed today bolsters that possibility, with House Speaker Nancy Pelosi indicated the articles of impeachment will be delivered to the Senate next week.

Republicans are eager to move to acquit the President after opening arguments are completed, even as Democrats demand witnesses and documents.

One caveat here: If four Republicans break ranks and vote with 47 Democrats on witnesses or documents, it could delay the GOP and White House hopes for a quick trial.

Johnson's comments come in the wake of CNN's latest reporting that an internal debate is raging over whether to add House members to Trump's defense team.

“I think he wants to put the best team possible at his table,” Johnson said. “In his view, that probably would include some House members, but we’ll see how it turns up.”

The Louisiana Republican said it’d be a “great idea” for Trump to pick some House Republicans to help Cipollone.

“I think it's a great idea because there's a few of us that know the record better than anyone,” Johnson said. “We've been engaged in this battle since the beginning — and if asked, if allowed the opportunity, we would like to finish it."

Johnson said he didn’t know but guessed that the decisions regarding the defense team will be made over the weekend.

He said he had a “good conversation” with Trump last night.

“He's very encouraged about the prospect of getting the trial begun and handled and he's very confident in his case — and he should be,” said Johnson.

Johnson, a member of the Judiciary committee and chairman of the Republican Study committee, said he would “love” to join the defense team if the president asked.

“There have been lots of discussions about that. It's no secret,” Johnson said. “And we've offered ourselves for that and it'd be a great honor to me if I was given that opportunity. I was a litigator in federal court for 20 years before I came to Congress, so, I'd love to be a part of it.”

The impeachment of President Trump had been at a standstill for weeks after the House approved two articles of impeachment, but never transmitted them to the Senate, which is responsible for holding the trial.

Speaker of the House Nancy Pelosi had insisted that Senate Majority Leader Mitch McConnell detail the trial procedures before she would formally send over the articles and some Democrats demanded he agree to allow witnesses at the trial before it began.

Pelosi just announced that the articles of impeachment would be sent next week — without an agreement from McConnell on those demands.

"What the Democrats have been demanding all along is some agreement up front in which witnesses will come and testify, including John Bolton, the former national security adviser, and documents will be provided. That's what Democrats wanted in an agreement. Mitch McConnell, the Senate majority leader, said no, he will not agree to that up front, and at a later point they can decide whether to subpoena additional witnesses."

Here's the bottom line: "Now it appears that Mitch McConnell is essentially going to get what he wants. They're going to send the articles over," Raju said.

House Speaker Nancy Pelosi spoke to reporters leaving the House floor just as her letter signaling she will send the articles of impeachment to the Senate next week was being sent to members.

She said she’s gotten “absolutely total cooperation” from her colleagues on her strategy with the Senate.

Pelosi added it “cracks me up” to see speculation about the pressure she’s facing over withholding the articles from the Senate.

House Speaker Nancy Pelosi is signaling there will be a vote next week on appointing impeachment managers and transmitting articles of impeachment to the Senate.

"I have asked Judiciary Committee Chairman Jerry Nadler to be prepared to bring to the Floor next week a resolution to appoint managers and transmit articles of impeachment to the Senate," Pelosi wrote in a letter to Democrats. "I will be consulting with you at our Tuesday House Democratic Caucus meeting on how we proceed further."

CNN's Manu Raju said this means "the impasse appears to be over."

"In the letter she makes it clear they are moving to get the articles to the Senate," Raju reported. "Once it is submitted, that's when the process will begin. It will take several days, then we'll begin opening arguments in the senate where each side will make their case." 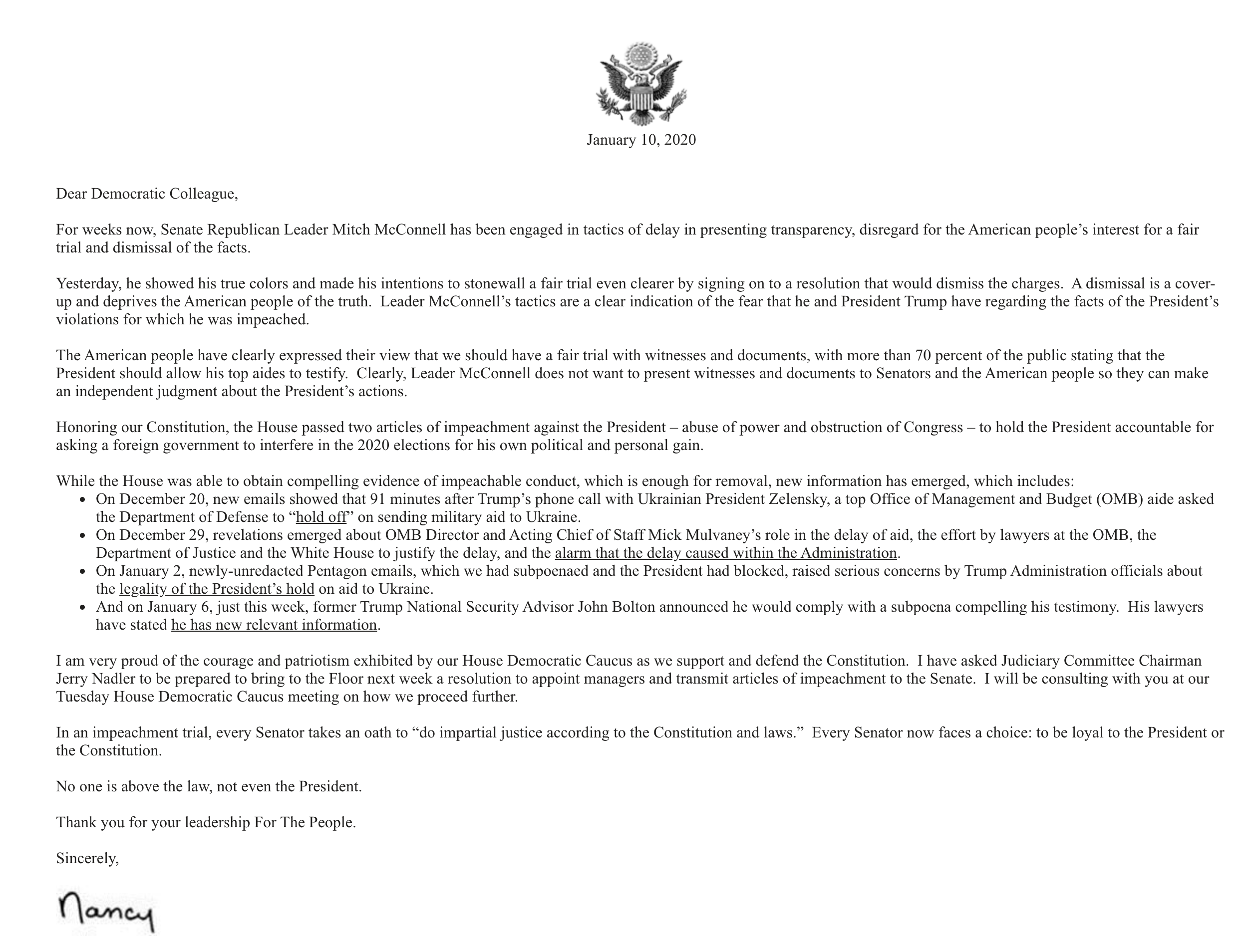