A senior White House official explained why there are ellipses in a rough transcript of President Trump's phone call with Ukraine's president that was released today.

"The ellipses do not indicate missing words or phrases," the official said.

So why are the ellipses there? The official said, "They refer to a trailing off of a voice or pause. If there were missing words or phrases, they would be represented by brackets or redactions. This is the standard practice that is followed for all records of Presidential phone calls."

What we know: According to the transcript of the July call, President Trump repeatedly pushed for Ukrainian president Volodymyr Zelensky to reopen an investigation of his potential 2020 rival, former Vice President Joe Biden and his son. He also asked Zelensky to work with Rudy Giuliani and Attorney General William Barr. 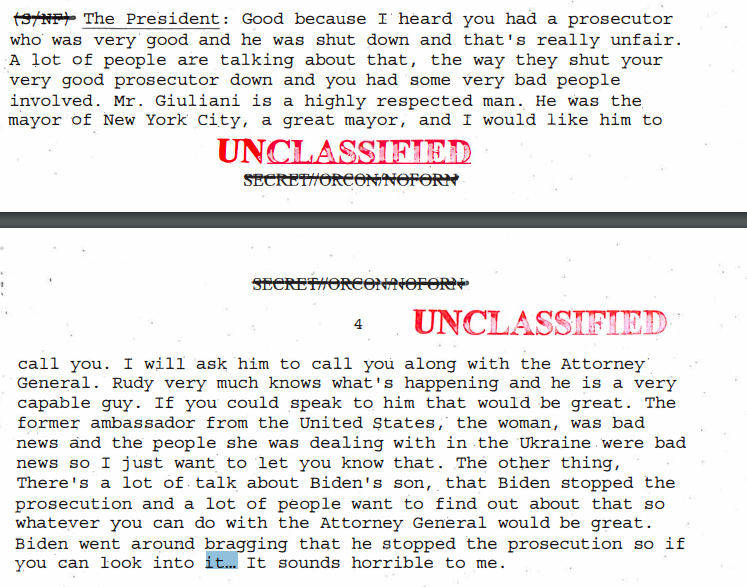 The Justice Department Office of Legal Counsel opinion, which was released today, says the whistleblower’s complaint centers on the July phone call between the President and the Ukrainian president, the rough transcript of which was released by the White House earlier today.

The opinion further notes that the intelligence community inspector general said the whistleblower, who is still unknown to the Justice Department, as having "some indicia of an arguable political bias."

Even so, the inspector general determined that the whistleblower's complaint was credible, that Trump's actions could be a violation of the campaign finance law.

Notably, yesterday the General Counsel for the Office of the Director of National Intelligence wrote in a letter to the whistleblower’s attorney, that the whistleblower acted in “good faith.”

“I also want to take this opportunity to state that we have every reason to believe that your client - our IC colleague - has acted in good faith and fully complied with the law,” Jason Klitenic, the general counsel, wrote. 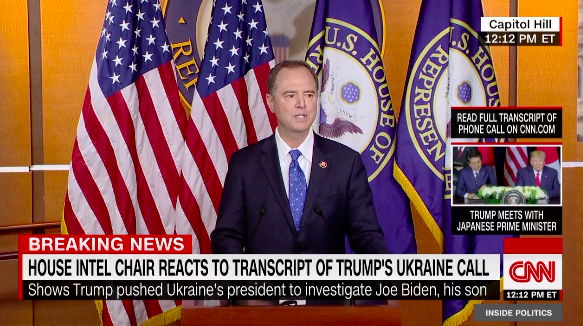 Schiff said the call details "reflect a Ukrainian president who was desperate for US support, for military support to help that country in a hot war with Putin's Russia, a country that is still occupied by irregular Russian forces and in which people face a very dangerous and continuing and destabilizing action by their aggressive neighbor."

He added later in his remarks that he believes the call shows "the president of the United States engaged in a shakedown of a foreign president" while "he is withholding vital military support to an ally, asking a favor of that ally to investigate his opponent."

House Speaker Nancy Pelosi released a statement regarding the White House transcript, saying it “confirms that the President engaged in behavior that undermines the integrity of our elections,” and that this combined with the “Justice Department’s acting in a rogue fashion in being complicit in the President’s lawlessness confirm the need for an impeachment inquiry.”

"The President has tried to make lawlessness a virtue in America and now is exporting it abroad," she said.

"The release of the notes of the call by the White House confirms that the President engaged in behavior that undermines the integrity of our elections, the dignity of the office he holds and our national security. The President has tried to make lawlessness a virtue in America and now is exporting it abroad.
I respect the responsibility of the President to engage with foreign leaders as part of his job. It is not part of his job to use taxpayer money to shake down other countries for the benefit of his campaign. Either the President does not know the weight of his words or he does not care about ethics or his constitutional responsibilities.
The transcript and the Justice Department’s acting in a rogue fashion in being complicit in the President’s lawlessness confirm the need for an impeachment inquiry. Clearly, the Congress must act.
As we await the transmittal of the full whistleblower complaint to the House and Senate Intelligence Committees, it is important to note that the complaint was determined by the Inspector General to be a matter of ‘urgent concern’ and ‘credible.’ The Intelligence Community has long recognized that whistleblowers constitute a vital part of our national security apparatus and that they must be protected. I reiterate my long-standing call to protect the whistleblower from retaliation.”

Both the Director of National Intelligence and the Intelligence Community Inspector General referred the whistleblowers' complaint to the Justice Department in late August.

Those notifications kicked off the Justice Department's analysis of whether there was a possible violation of a campaign finance criminal statute. The inspector general also referred the matter to the FBI for criminal investigation separately.

Notably, the DNI contacted Justice Department's Office of Legal Counsel (OLC) for guidance. It was that office that determined the complaint could be looked at as a possible criminal matter.

So what was Barr’s role and who made the decision there was no criminal violation? Barr had “minimal involvement” in the Justice Department’s handling of the referral, an official briefed on the matter said.

The criminal division, led by Brian Benczkowski, and the office of Deputy Attorney General Jeffrey Rosen primarily dealt with the legal analysis under criminal law — though the final decision also involved the heads of the National Security Division and the Office of Legal Counsel. The career prosecutors from the public integrity section and other lawyers worked on the assessment that arrived at the final decision that there was no criminal violation.

Here's a timeline of events, according to senior DOJ officials: 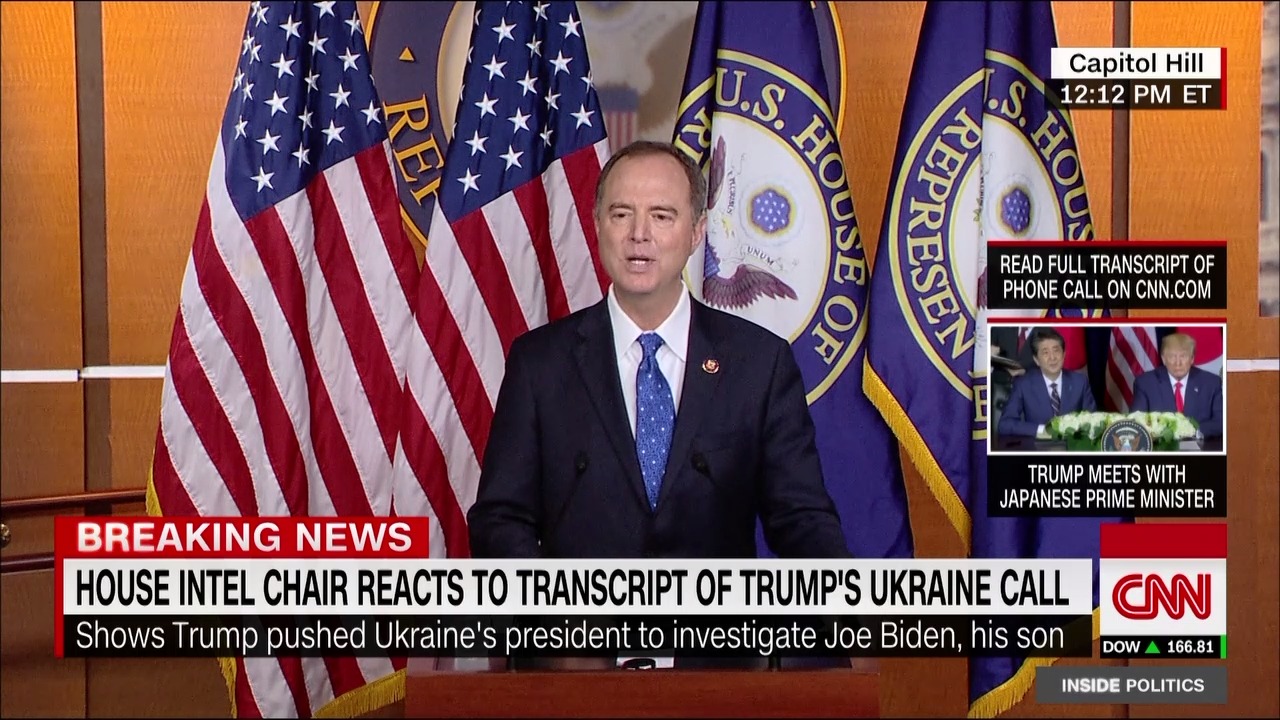 Rep. Adam Schiff, chairman of the House Intelligence Committee, said the rough transcript of President Trump's phone call with the Ukrainian president was "far more damning" than he expected.

"The notes between the call between the president of the United States and the president of Ukraine as well as the legal opinion drafted by the Department of Justice in an effort to prevent the whistleblower complaint from coming to our committee. And I have to say that I'm shocked by both. The notes of the call reflect a conversation far more damning than I or many others had imagined. It is shocking at another level that the White House would release these notes and felt that somehow this would help the President's case or cause. Because what those notes reflect is a classic mafia-like shakedown of a foreign leader," Schiff told reporters today.

What the rough transcript says: President Trump repeatedly pushed for the Ukrainian president Volodymyr Zelensky  to reopen an investigation of his potential 2020 rival, former Vice President Joe Biden and his son, and asked the Ukrainian leader to work with Rudy Giuliani and Attorney General William Barr on the issue, according to a transcript of the July call.

However, the inspector general — who spoke at a closed-door briefing last week — would not say if those instances involved President Trump, the sources said.

One source said that Inspector General Michael Atkinson referenced "a sequence of events" and "alleged actions" that took place. However, another source disputed that the IG provided substantive details regarding the whistleblower claim.

What we do know about the complaint: The Trump-Ukraine drama was first triggered by a whistleblower, who filed a complaint about Trump's contact with a foreign leader. After that, allegations surfaced that Trump threatened to withhold $400 million in military and security aid from Ukraine to force Kiev to open an investigation into his potential 2020 rival Joe Biden and his son, Hunter.

There is no evidence of wrongdoing by Biden or his son. 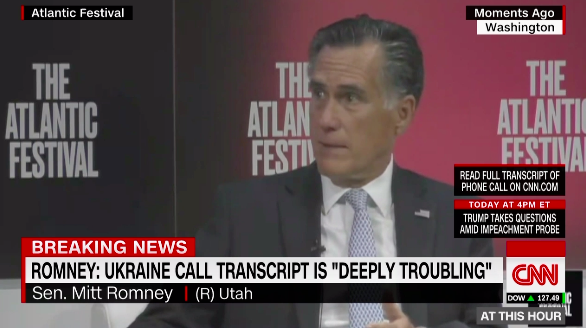 Speaking at The Atlantic Festival this morning, GOP Sen. Mitt Romney said he found the details revealed from the President's call with the Ukrainian president to be "deeply troubling."

"My reaction was the same as I had a few days ago, which is this remains deeply troubling and we'll see where it leads. But the first reaction is troubling," Romney said.

Romney is one of the few Republicans in Congress who has spoken about the need to investigate Trump.

On whether he perceived a "quid pro quo" between Trump and President Zelensky, Romeny said he's not "focused so much on the quid pro quo element."

"I said this in my first reaction, which is if the president of the United States asks or presses the leader of a foreign country to carry out an investigation of a political nature that's troubling. And I feel that," Romney said.

Asked if this could rise to an impeachable offense, Romney said, "I'm going to leave it what I've said and let the process gather the facts that will ultimately come out."