Our live coverage of the impeachment has ended for the day. Read up on the latest news below.

President Trump just slammed House Speaker Nancy Pelosi’s decision to hold off on transmitting the two articles of impeachment to the Senate and is now demanding an “immediate trial.”

“So after the Democrats gave me no Due Process in the House, no lawyers, no witnesses, no nothing, they now want to tell the Senate how to run their trial," Trump tweeted.

Trump's tweet comes after Senate Majority Leader Mitch McConnell and Democratic Leader Chuck Schumer failed to reach an agreement today on the structure for the Senate trial, according to two senators and an aide, leaving the path for a bipartisan agreement in limbo as Congress breaks for the holidays.

The pair met privately for 20 minutes, but the initial talks stalled over a dispute over when the articles of impeachment should be transmitted to the Senate from the House.

The two leaders differ on how they see any initial agreement coming together and that gap hasn’t yet narrowed.

The top two Senate leaders failed to reach an agreement on the structure for the Senate trial, according to two senators and an aide, leaving the path for a bipartisan agreement in limbo as Congress breaks for the holidays.

Senate Majority Leader Mitch McConnell and Democratic Leader Chuck Schumer met privately off the Senate floor for 20 minutes, but the initial talks stalled over a dispute over when the articles of impeachment should be transmitted to the Senate from the House.

The two leaders differ on how they see any initial agreement coming together and that gap hasn’t yet narrowed.

What happens now: The two sides are expected to continue to work toward an agreement over the holidays, the people said. The whole process remains in limbo as the House hasn’t voted to appoint managers and transmit the articles of impeachment to the Senate.

McConnell has left open the possibility of voting to move forward with the trial without a bipartisan agreement when the Senate returns in January.

McConnell said earlier today he would have more to say “later” about the next steps for the Senate.

Schumer's spokesperson made clear the New York Democrat is still pushing for an agreement aligns with his proposal to hear from witnesses and obtain documents.

“Sen. Schumer asked Sen. McConnell to consider Sen. Schumer’s proposal over the holidays because Sen. Schumer and his caucus believe the witnesses and documents are essential to a fair Senate trial,” Justin Goodman, Schumer’s spokesman, said in a statement. 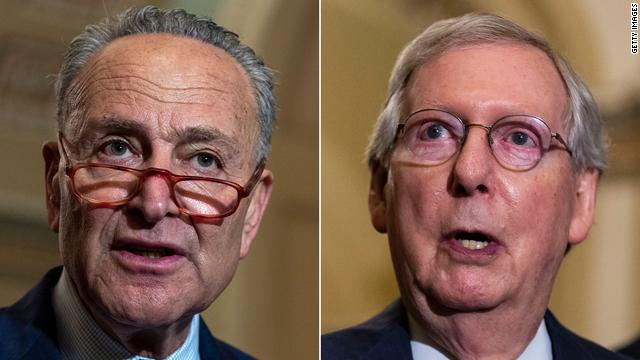 Following a closed meeting between Senate Minority Leader Chuck Schumer and Majority Leader Mitch McConnell, Schumer's spokesperson issued a statement asking the Kentucky Republican to consider a proposal on the upcoming impeachment trial over the holidays.

McConnell would not comment on Schumer's proposal as he left the Senate floor a few minutes ago, but said he would have more to say on the floor later. His aides don’t know when.

It's the day after the House voted to impeach President Trump. While the next step in the impeachment process involves a trial in the Senate, the House has yet to send articles over to the Senate — and the two chambers seem to be in a standoff.

The House is now taking its last vote of the year on passage of Trump’s revised NAFTA plan, or the US Mexico Canada Agreement.

The House will then adjourn until January, without a vote to formally advance and send the impeachment articles to the Senate.

President Trump told reporters in the Oval Office today that he doesn’t “feel” like he’s being impeached,” adding that it’s a hoax.

“I don’t feel like I’m being impeached because it’s a hoax, it’s a setup. It’s a horrible thing they did,” Trump told reporters when asked how it feels to be the third president impeached by the House.

Trump also claimed that many Democrats “didn’t want to vote that way.”

The President then discussed his Michigan rally last night saying he had a “great time” adding the “room was packed.”

“It’s a phony deal and they cheapen the word impeachment… that should never again happen to another president," Trump said.

Asked about his strategy for a Senate trial, President Trump told reporters that the Senate is “very, very capable,” adding that it “looks like” White House counsel Pat Cipollone will be his main lawyer in the trial.

When asked if Cipollone would be his main lawyer in the Senate trial, Trump said: “It looks like that yeah. Pat Cipollone. We have a couple of others that we’re gonna put in but Pat’s been fantastic as White House counsel.”

The House of Representatives is likely to close up shop today to begin its holiday recess — and it is not expected to vote on a resolution naming impeachment managers before lawmakers head home, according to senior Democratic sources.

That means transmitting the articles to the Senate could wait until the week of Jan. 6 when the House reconvenes after the new year.

House Speaker Nancy Pelosi has said that the resolution to name impeachment managers needs to be approved first before the articles could be transmitted. And she's said that she needs to understand what the Senate trial will look like before naming the House managers who will prosecute the case before the senators.

Senate Minority Leader Chuck Schumer and Senate Majority Leader Mitch McConnell are now meeting to discuss the process going forward. It remains to be seen whether the trial could start the week of Jan. 6, as initially expected, but it is still possible that it could start then.

It won't take much time for the House to approve the resolution naming the managers. The next day with House roll call votes is Jan. 7.

House Majority Leader Steny Hoyer is expected to lay out the path ahead for the chamber on the floor after the next vote series.

President Trump became the third president in US history to be impeached after a deeply-divided House passed two articles of impeachment — abuse of power and obstruction of Congress.

Yesterday's House vote shifts the impeachment proceedings to the Senate, where a trial will decide whether to convict Trump and remove him from office.

CNN’s Lauren Fox explains what happens next and what a Senate trial could look like: