Adam Emrick, the city administrator of Conway, South Carolina, said floodwaters in the city are subsiding — but they could come back.

“We are cautioning everyone not to be over confident. The water is going to come back up," he said.

Emrick said the water has gone down so much that some residents who had to be rescued from flooding were able to briefly return home. But it may be a short reprieve

"The water is subsiding right now to the point where they have been able to go back in and collect their belongings, what’s left, before the waters start to rise again. We are worried about Friday," he said

There have been no reports of injuries during the flooding, but officials have not yet been able to assess damage.

“We are hearing that the water may not crest until Tuesday or Wednesday. It won’t reach the highest model until next week,” spokesperson for the city of Conway Taylor Newell said.

“We had some flash floods. The water is now receding from those flash floods, but we expect more flooding in the next few days,” Newell added.

The city is preparing for flooding worse than it saw in 2016, when Hurricane Matthew hit.

“The flooding is expected to be four feet higher than Matthew was in Conway,” Newell said “There are areas that weren’t impacted during Matthew that will be impacted this time around.” 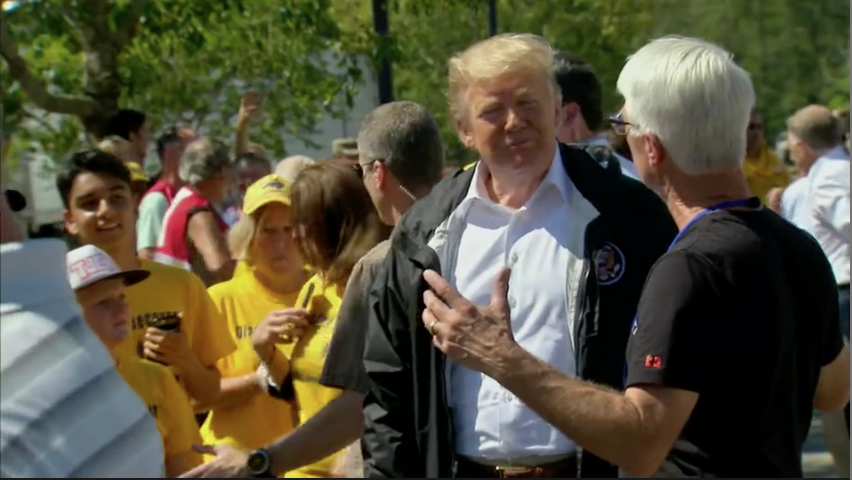 President Trump just arrived at a Baptist church in New Bern, North Carolina, where he was greeted by the local pastor.

Trump is expected to tour areas where relief centers are staged.

The President's motorcade arrived in New Bern after rolling along North Carolina 70 East. They passed by spectators, peppered down the route, who watched and took photos as they drove by. 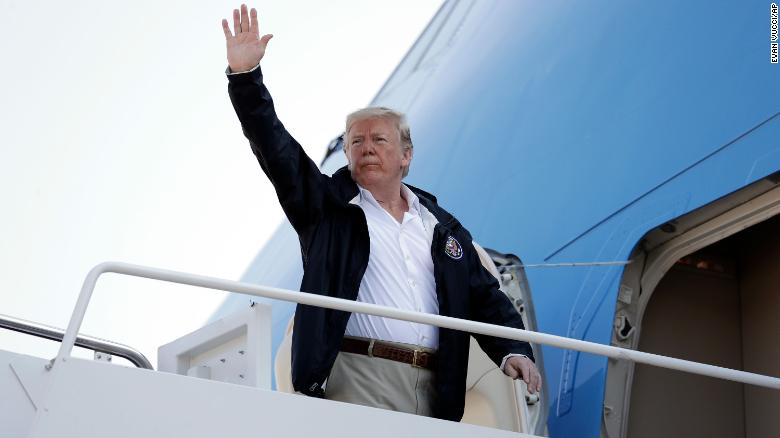 President Trump lauded emergency workers in North Carolina during a visit to the storm-impacted region on Wednesday as he predicted a costly clean up.

"The job you’ve done has been incredible," Trump said inside an airplane hangar in North Carolina. "They’re talking about it all over the world."

"Unfortunately, the money will be a lot but it's going to come," he said later, vowing a robust federal response to the storm.

He told those who lost loved ones the country was in mourning.

"America grieves with you and our hearts break for you. God bless you. We will never forget your loss," Trump said. "To all those impacted by this terrible storm, our entire American family is with you and ready to help. You will recover." 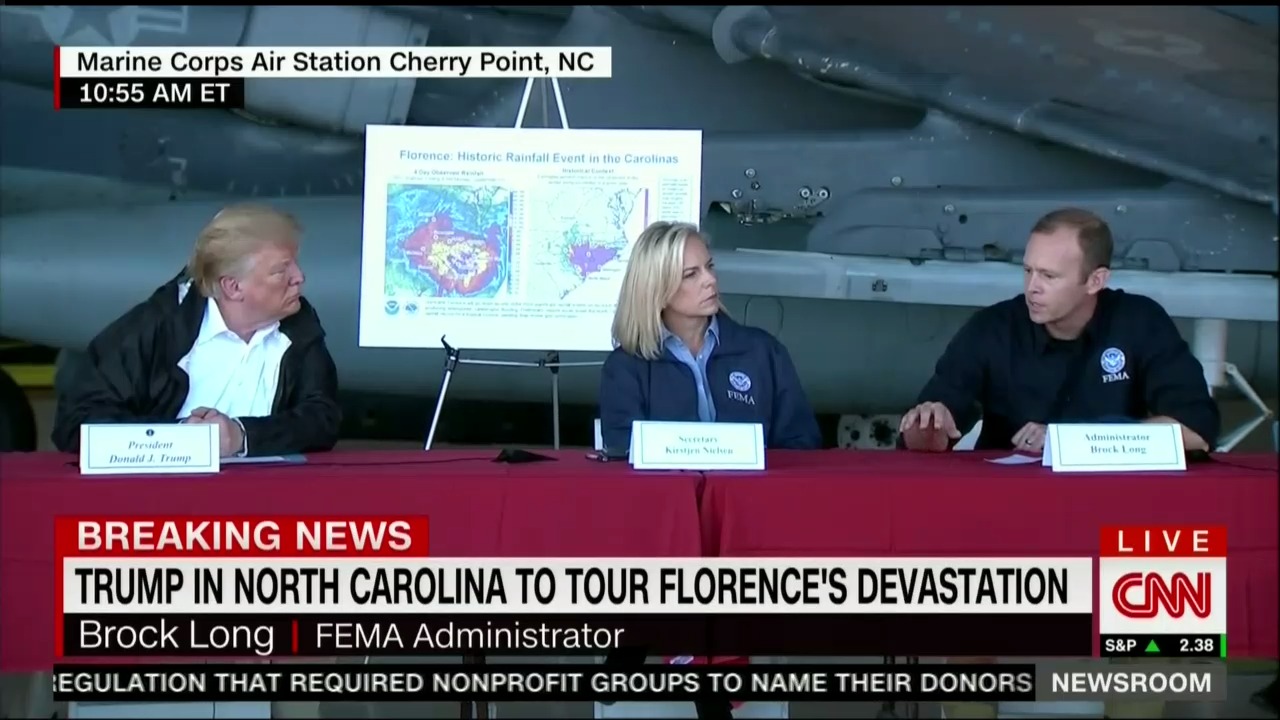 Federal Emergency Management Agency administrator Brock Long said that although the rain has stopped in the Carolina's, the devastation isn't over.

"This event is not over," he said. "The rivers are still cresting. We still have a lot of work to do."

Here are some of the things FEMA is still working on: 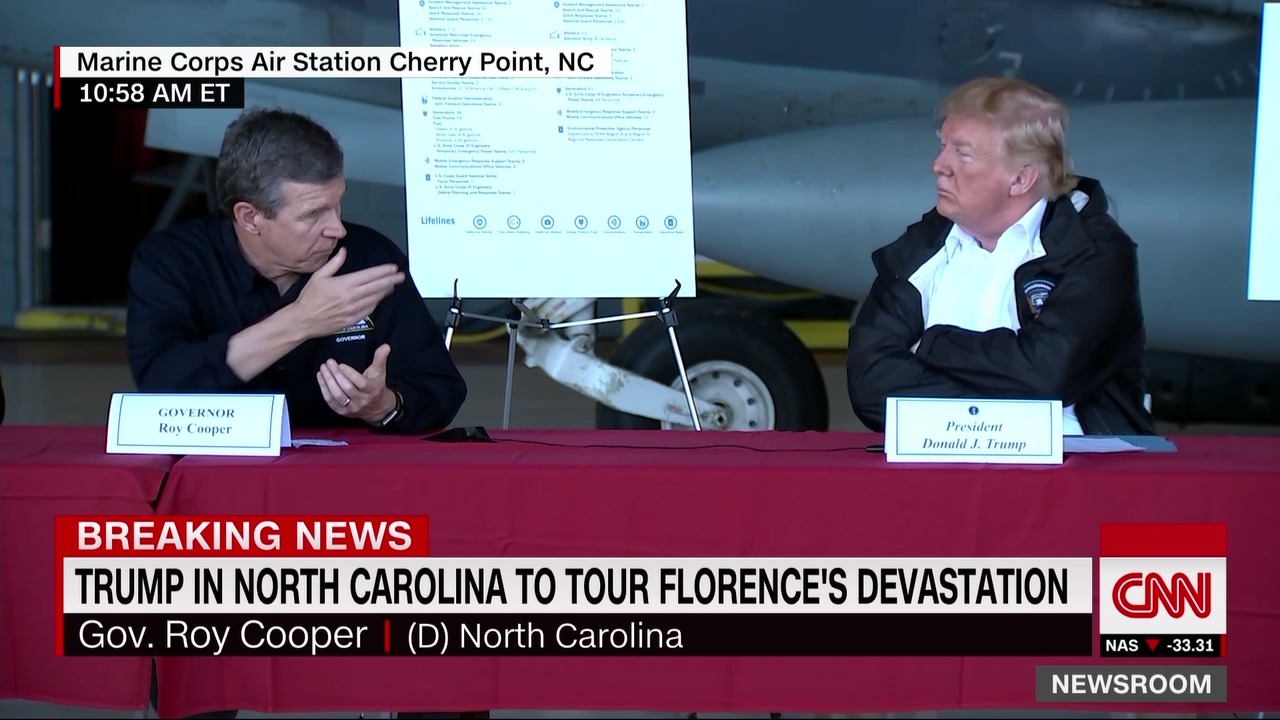 "Our people are still reeling. We have lost 27 lives officially so far, and more are under investigation. We mourn their loss," he said, adding that farmers lost crops, businesses are shuttered, people lost homes.

"We are beginning the process of getting our feet under us, Mr. President," Cooper said, describing Hurricane Florence as "a storm like no other."

"We have weathered storms before in our state. Mr. President, we have never seen one like this. This one has been epic. It has been disastrous. And it has been widespread," he said.

Appealing to Trump, Cooper said, "Mr. President, we have a long road ahead. And the days and the months and even years ahead to make sure we build back to where we need to be here in North Carolina."

"And, you're here, and I'm asking you, sir, for your help every step of the way." 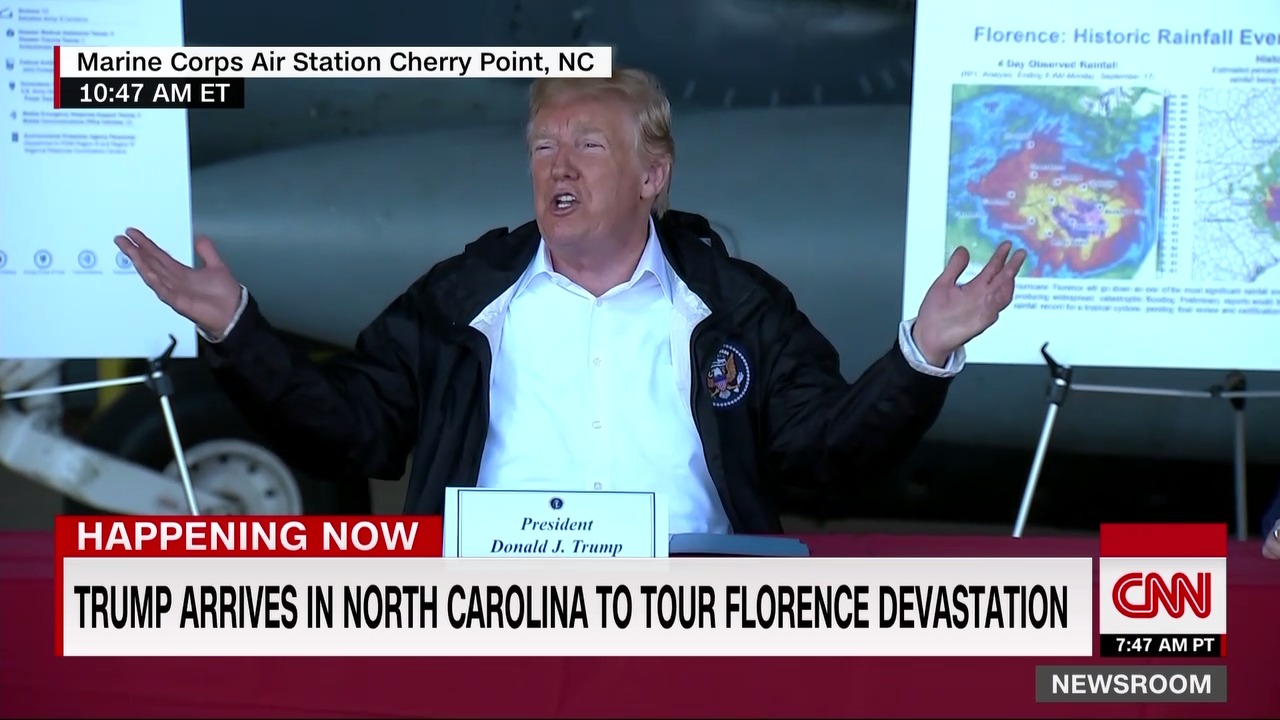 President Trump is speaking at Marine Corps Air Station in Cherry Point, North Carolina, where he is due to receive a hurricane briefing.

"To the families who have lost loved ones, America grieves with you and our hearts break for you. God bless you. We will never forget your loss. We will never leave your side. We are with you all the way," he added. "To all of those impacted by this terrible storm, our entire American family is with you and ready to help you will recover."

Watch live in the video player above.

President Trump will arrive in North Carolina today to blue skies, but what remains a very dangerous situation.

Much of the eastern half of both North and South Carolinas are still dealing with the record amount of water left by Florence.

Some rivers in North Carolina have set record new heights and look to be near their peak.

For example, the Cape Fear River near Chinquapin has risen to about 27 feet, according to the Flood Inundation Mapping and Alert network. That's nearly four feet above its previous record.

It will take the rest of the week for most these rivers to even remotely get back to normal.

And it's not over: Some rivers, like the Waccamaw near Conway, South Carolina, aren't even forecast to peak until later this weekend. The forecast is for it to rise a couple of feet above the rivers previous crest record, at 19.5 ft.

But there is some good news: For the next several days, the rain will be held at bay. Giving time for things to subside and dry out. By this weekend and into next week the chance of rain is likely to return. But thankfully not the rain we saw during Florence. 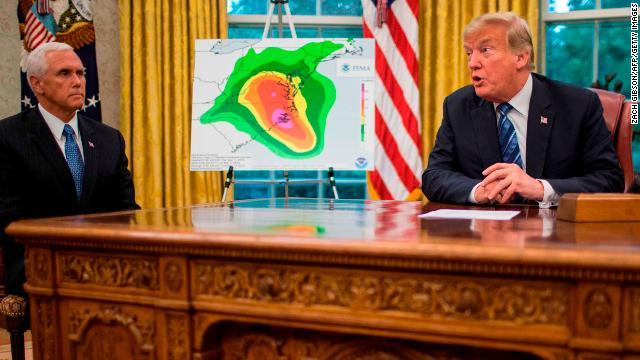 Precise details of the President's trip were being closely held ahead of his morning departure from the White House, but he is expected to receive briefings and view damage during his stay.

He is due to arrive mid-morning at the Marine Corps Air Station Cherry Point, situated along the bloated Neuse River.

First lady Melania Trump will not be traveling with the President today. Her spokeswoman said she had a scheduling conflict.