Our live coverage has ended, but you can scroll through the posts to see how it unfolded.

President Trump and Turkish President Recep Tayyip Erdogan held a joint news conference this afternoon at the White House following a day filled with public testimonies in the impeachment inquiry.

Here are some of the big takeaways from the news conference:

President Trump said he has a “great relationship” with Kurds in Northern Syria, “and we’ve fought with them very successfully against ISIS.”

He also said that Turkish President Recep Tayyip Erdogan “has a great relationship with the Kurds.”

“Many Kurds live in Turkey and they’re happy and they’re taken care of,” the President said, standing side by side with Erdogan. He called anything to the contrary “really a misnomer.”

For his part, Erdogan said that it wasn’t the Kurds he had a problem with, it was terrorists.

The Syrian Democratic Forces (SDF), who operate in Northern Syria, are led by the Kurdish People's Protection Units (YPG), which Turkey considers a terrorist organization affiliated with the separatist Kurdistan Workers' Party (PKK).

President Trump said he knows nothing about explosive new information revealed in today's public impeachment hearing that places him closer to the center of a Ukraine pressure campaign.

Trump, speaking at the White House, said he doesn’t recall a phone conversation with Ambassador to the European Union Gordon Sondland, in which Trump is said to have asked about “the investigations.”

The top US diplomat in Ukraine, Bill Taylor, disclosed the phone call today in the first public impeachment hearing. Taylor said he learned from one of his aides that Sondland spoke to Trump on July 26 at a restaurant in Kiev, and that the aide overheard Trump asking about investigations into the Bidens.

“I know nothing about that,” Trump said when asked about the claim.

Speaking in the East Room, Trump said he did speak to Sondland to tell him there was “no quid pro quo” in his dealing with Ukraine.

But he said the details revealed by Taylor were new to him.

“I never heard this,” he said, adding it sounded like “more second hand information.”

Earlier in the news conference, Trump said he hadn’t watched the impeachment proceedings “for one minute,” because he’s spent the day with Turkish President Recep Tayyip Erdogan, which he thinks is “far more important”

Turkish President Recep Tayyip Erdogan addressed a recent House resolution acknowledging the Armenian genocide, suggesting that the legislation was bolstered by individuals sympathetic to the Kurdish forces who Turks regard as terrorists.

“Some circles who are empathetic towards these terrorist organizations are feeling deeply upset. They are deeply disturbed, and they are using this disinformation in order to cloud the understanding of the public opinion … with the eventual gain or goal of harming our relations,” Erdogan said through a translator at a White House news conference today. “And some historical developments and allegations are being used in order to dynamite our reciprocal and bilateral relations, especially in the House of Representatives, some of the resolutions that were passed on October 29th served this every purpose, hurt deeply the Turkish nation and they have a potential of casting a deep shadow over our bilateral relations, and I shared this information with [Trump]."

Some background on the resolution: In late October, the House passed a resolution recognizing the genocide of an estimated 1.5 million Armenians during World War I, a move the Turkish government has long opposed.

The bill, led by California Democrat Adam Schiff, passed on a vote of 405-11.

“The decision makers in an incident that took place about 104 years ago should not be politicians, but historians. We have nothing to hide and we have a full self esteem in that regard," Erdogan said.

He continued: “But I need to state very clearly that we are as Turkey on the side of dialogue and open discussion and debate. And we have voiced our proposals to the Armenian party to open the archives reciprocally and establish a history commission. I believe the Senate will take the United States out of this vicious cycle, which happened as a result of the resolution of the House of Representatives.”

President Trump, speaking at a joint news conference, said he's releasing a transcript of a second call with his Ukrainian counterpart.

"I'm going to be releasing I think on Thursday a second call, which actually was the first of the two, and you'll make a determination as to what you think there," he said.

More on this: Trump has been teasing the transcript of his call with the Ukrainian president all week — this communication having taken place in April before the July conversation at the heart of the impeachment inquiry.

The first question asked of President Trump during his joint conference with President Recep Tayyip Erdogan of Turkey this afternoon pertained to the ongoing impeachment inquiry.

Shortly before the start of the conference, the House concluded its first day of public testimonies in the inquiry.

"This is a sham and shouldn't be allowed. It was a situation that was caused by people that shouldn't have allowed it to happen. I want to find out who's the whistleblower because the whistleblower gave a lot of very incorrect information including my call with the president of Ukraine," Trump said.

Trump made the remarks at the start of a joint news conference following talks at the White House.

It was an upbeat tone after the US-Turkey relationship has hit a rough patch.

Trump said negotiations were successful at the White House, calling it a "productive conversation on a range of very important topics." He said he discussed the situation in Syria, which Turkey invaded after Trump withdrew US troops.

He said Erdogan assured him he would "uphold what it's supposed to uphold."

Trump called Turkey's acquisition of a Russian air defense system a serious challenge. But he expressed optimism the issue would be resolved, and said he'd agreed with Erdogan to have top officials from each of their governments discuss the matter. 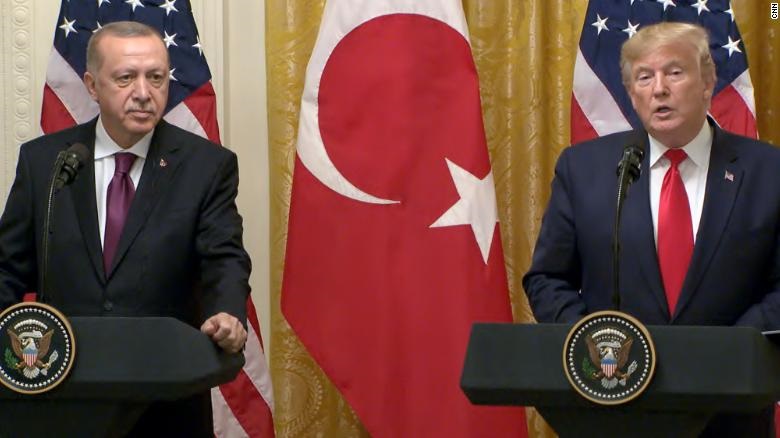 "Turkey will continue to uphold what it's supposed to uphold," Trump said regarding the ceasefire agreed upon last month in Syria. "I know the ceasefire, while complicated, is moving forward at a very rapid clip. There's a lot of people that want to see that work after so many deceased and so many centuries, you might say."

Some background on Syria: Trump decided to withdraw US troops from northern Syria and on Oct. 21 he claimed the US never agreed to protect Syrian Kurds forever, suggesting the US may secure an oil deal for the Kurds to bolster their finances. The US had negotiated a "ceasefire" with Turkey to have Kurds exit the area, a deal that forced America's one-time Kurdish allies to cede large swaths of territory to Turkey.

During an Oval Office meeting this afternoon, both leaders discussed Erdogan's position on obtaining Russia's S-400 missile defense system and Turkey’s conflicts with the Kurds.

The meeting comes hours of the House held its first public hearing in the impeachment inquiry into Trump.