New photos released by the White House on Saturday appear to show President Donald Trump working from the Walter Reed National Military Medical Center in Bethesda, Maryland, where he has been since Friday.

The President’s physician, Navy Cmdr. Dr. Sean Conley, stated earlier on Saturday that Trump had "made substantial progress since diagnosis."

In one of the photos, Trump is sitting at the same desk from which he delivered a video message earlier in the day, in which he said that he feels "much better now."

Secretary of State Mike Pompeo will curtail part of his upcoming Asia trip, the State Department announced on Saturday.

The statement, from spokesperson Morgan Ortagus, said Pompeo would work to reschedule those countries on another Asia trip later this month.

Pompeo will depart for Tokyo on Sunday as originally scheduled.

Pompeo cancels Florida event: The news comes after Pompeo called off a trip to deliver remarks to a conservative Christian organization on Saturday evening, saying he had done so "out of an abundance of caution."

“You should know that I’m feeling fine, I’m doing great, I’ve been tested twice in two days, I’m as healthy as I’ve been and I intend still to have a trip that I’m planning to take to Asia tomorrow,” Pompeo said.

Pompeo said he had not been with President Donald Trump since the signing of the Abraham Accords at the White House on September 15.

He said the President has made “unbelievable improvements from yesterday morning” when both he and Trump's physician, Dr. Sean Conley, were “very concerned.”

Meadows claimed doctors made the recommendation that President Trump should travel to Walter Reed “out of an abundance of caution,” adding “there was never a consideration and never even a risk with the transition of power.”

He also said the video message the President tweeted Saturday night was filmed “a few hours ago,” and that he was "optimistic based on the current results."

White House press secretary Kayleigh McEnany tweeted another memo from the President’s physician, Dr. Sean Conley, who states President Trump, “continues to do well, having made substantial progress since diagnosis.”

In the memo, Conley says Trump completed his second dose of remdesivir today and “remains fever-free and off supplemental oxygen.”

He goes on to say that Trump spent most of the day conducting business and “while not yet out of the woods, the team remains cautiously optimistic.”

Doctors treating the President for Covid-19 created confusion earlier Saturday with remarks during a briefing that appeared to shift the timeline of Trump's positive coronavirus test and treatment. Conley released a statement afterward to try to clarify the comments.

The President's doctors' upbeat assessment of his condition, stating that he was feeling well and had been "fever-free," were contradicted moments after when a source familiar with the President's health told reporters the next 48 hours will be critical in determining how he fares. That source was identified by the New York Times and the Associated Press as White House chief of staff Mark Meadows.

Multiple attendees of that event, including Trump, have tested positive in the days since the ceremony, which featured many people not wearing masks or observing social distancing protocols.

“seems highly likely this originated at the SCOTUS announcement last week. It may have come from the Hill. The next major concern will be securing Capitol Hill and protecting lawmakers.”

No medical officials have officially commented on when they believe the President contracted Covid-19 but a White House official told CNN Trump received his first positive coronavirus test result on Thursday, after returning from a fundraiser in New Jersey,

Here's where the President has been over the past two weeks: 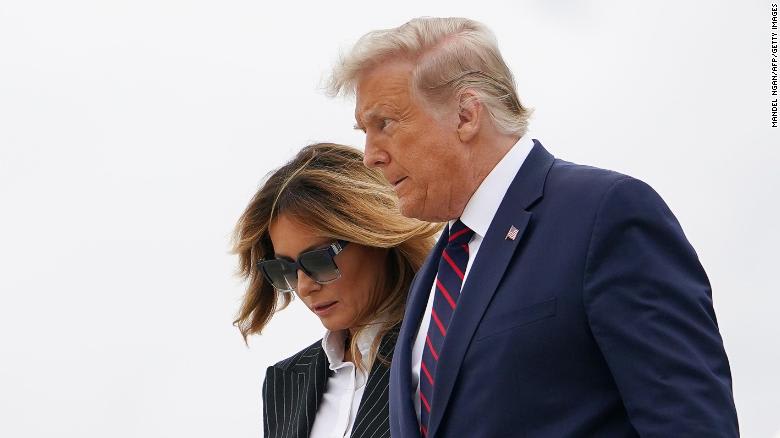 A timeline of Trump's past two weeks

The Montgomery County Police Department has closed down the road near Walter Reed Medical Center for an investigation into an abandoned backpack, according to Montgomery County police public information officer Rebecca Innocenti.

They are waiting for the fire marshal to clear the scene.

President Donald Trump got his first positive coronavirus test result on Thursday after returning from Bedminster, New Jersey, according to a White House official.

That result was via a rapid test. The President then took a more thorough PCR test which also came back positive, according to the official.

He had just returned from a fundraiser at his New Jersey golf club, which went on as planned Thursday night despite the President and staff knowing he had been exposed to coronavirus.

Donors that gave $250,000 were able to participate in a roundtable, photo opportunity and reception with the President, according to the event invite.

Three attendees told CNN that most people at the fundraiser were not wearing masks; all three say they have not been contacted by any contact tracers.

The President announced he and first lady Melania Trump tested positive for coronavirus roughly eight hours after leaving the fundraiser, when he was back at the White House.

This comes as CNN reported earlier Saturday that Biden will be tested more frequently for Covid-19, and intends to move forward with in-person campaigning.

The Democratic nominee will receive a test each time he travels, a source familiar with his testing said.

Read the full statement from Andrew Bates below:

"We have adhered to strict and extensive safety practices recommended by public health experts and doctors in all of our campaigning – including social distancing, mask wearing, and additional safeguards. Vice President Biden is being tested regularly, and we will be releasing the results of each test. Vice President Biden tested negative twice yesterday and was never in close contact with President Trump or members of his team or family during the debate. When he was not on the debate stage, he wore a mask – which he has called on all Americans to do as a patriotic duty to protect one another. Vice President Biden will continue to lead by example as we work together to overcome this pandemic."