Staff at the White House Executive Residence are feeling “nervous” about news of the President and Melania Trump testing positive for Covid-19, a source tells CNN, adding residence staff are “very careful, but there is concern.” The first couple is currently in isolation inside the White House residence.

The residence is staffed by approximately 90 workers, including six butlers and eight ushers, multiple cooks, housekeepers, florists and other maintenance and support workers.

In March, CNN reported Melania Trump had reduced the size of the staff to only essential workers, sending the rest home, only coming in on an as-needed basis.

In April, CNN reported she required all of the residence staff to wear face coverings and practice social distancing. The White House has 132 rooms and is 55,000 square feet.

In light of President Trump's positive test, Democratic presidential nominee Joe Biden is expected to get tested for coronavirus this morning, according to a source familiar with his plans.

According to the Commission on Presidential Debates, everyone attending the debate at Case Western Reserve University, would undergo testing for Covid-19 and follow other health safety protocols. 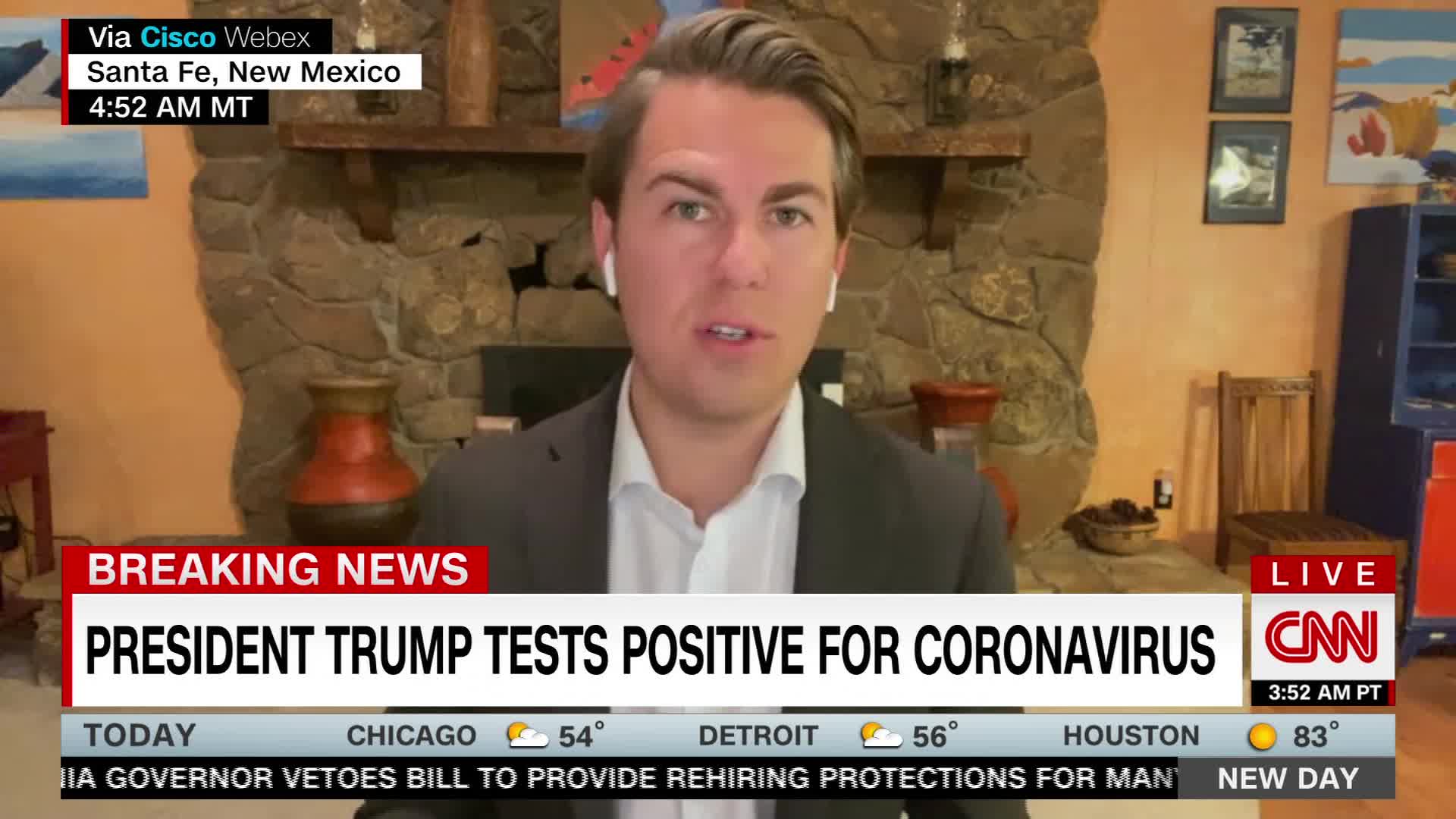 “There's a broader issue here regarding continuity of government,” he said.

Taylor said that while he was in the DHS, there were trainings to prepare for situations where leadership might be affected from doing their jobs.

“The thing that very few of us have talked about publicly and hoped never happened is that that lax approach to the Covid-19 pandemic might actually have an affect on the stability of the federal government. We are now in that situation,” he said.

Taylor said that while he wishes the President a speedy recovery, “we have to consider the possibility that this may affect, again, his ability to carry out the duties of his office. That's a big concern. It's something that this White House wasn't preparing for, in my view.”

Taylor said officials also need to keep an eye on foreign actors looking to capitalize on this moment.

“Senior national security officials are watching to make sure that our foreign adversaries don't find a way to exploit this health crisis that's reached the highest levels of the US government,” he added.

"Fran and I join our fellow Ohioans in praying for President Trump and First Lady Melania Trump after they announced early today that they have both tested positive for Covid-19."

"Along with millions of others, we extend our prayers and best wishes to the President and First Lady during this time for a speedy recovery and for their good health," he said.

Trump tweeted early Friday that he and the first lady tested positive for Covid-19 and will begin to quarantine immediately.

In May, Trump announced the decision to withdraw the United States from WHO. The withdrawal, which goes into effect July 6, 2021, has drawn criticism from some bipartisan lawmakers, medical associations, advocacy groups and allies abroad.

Given President Trump’s age and his pre-existing conditions, he’s going to be at increased risk after he tested positive for Covid-19. However, the odds are in his favor, CNN's chief medical correspondent Dr. Sanjay Gupta said.

"The odds are very much in his favor. I don't want to unsettle people too much with this. You know, greater than 90% - 95% chance that he will get through this, still," he said on CNN's New Day.

Trump has several risk factors for more severe Covid-19 symptoms, including his age and body mass index. Men are also more likely to suffer severe illness from coronavirus than women.

Moving forward, the President needs to be in isolation "for probably up to two weeks," Gupta said.

"We're talking about the highest levels of government. There's a lot of people [who] today will learn that they need to be in quarantine for possibly the next two weeks," he added.

World leaders and politicians are reacting today to the news that President Donald Trump and Melania Trump have coronavirus.

Here's what some of them are saying:

“Chancellor #Merkel: I send all my best wishes to Donald and Melania Trump. I hope that you will get over the #corona infection and will soon be completely healthy again. @POTUS @FLOTUS," government spokesperson Steffen Seibert tweeted on behalf of Merkel.

“My sincere wishes for a speedy recovery to US President Donald Trump and the First Lady, and for them to progress beyond this stage quickly in order to return to full health and wellness and to continue to lead with the valuable efforts of the United States on combating this virus worldwide, for the benefit of all humanity. May God protect our people, and all peoples of the world," the Egyptian leader said on Facebook.

“[The] First lady and I wish you and your wife a speedy recovery, along with the people of South Korea. We also would like to extend a word of consolation and encouragement to your family and the American People," he said in a letter.

Nechirvan Barzani, President of the Kurdistan Region of Iraq

His announcement came just hours after news that Hope Hicks, one of the President's closest aides, also tested positive. Hicks had traveled with Trump multiple times recently and was seen this week with several other of the President's aides — none of whom wore masks.

"This is very concerning," says Anne Rimoin, an epidemiology professor at UCLA. "The number of people that could potentially be exposed and at risk of contracting this virus is significant here."

There are many questions going forward — including who else may have been exposed to the virus and what the President and the first lady will need to do now.

Here's what the US Centers for Disease Control and Prevention says should happen when someone tests positive for the virus or is exposed to an infected individual:

US lawmakers, state governors and national leaders tweeted their well-wishes to President Trump and Melania Trump following their diagnosis of coronavirus.

"Fran and I join our fellow Ohioans in praying for President Trump and First Lady Melania Trump after they announced early today that they have both tested positive for COVID-19," he said in a statement. "Along with millions of others, we extend our prayers and best wishes to the President and First Lady during this time for a speedy recovery and for their good health."