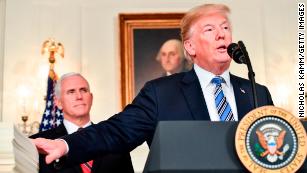 President Trump and first Lady Melania Trump arrived tonight in West Palm Beach, Florida, where they will be spending the weekend in Mar-a-Lago.

The President emerged from Air Force One, followed closely by son Barron and then the first lady. They walked down the loading stairs to cheers from a group of supporters gathered at the airport. The President waved several times and smiled. The President and first lady never held hands or interacted.

It was their first public appearance together since CNN's interview with a former Playboy model who claims to have had a 10-month affair with the President years before he was elected.

Earlier today, Trump, in a surprise news conference, said he had "no choice" but to sign the bill because of the funds it provides to the military.

Stormy Daniels’ attorney Michael Avenatti told CNN this evening that he was in possession of a DVD that includes evidence, which would allegedly prove she had an affair with Donald Trump over a decade ago.

When asked about the contents of the DVD, Avenatti would not give specifics about the evidence.

Avenatti tweeted a photo of a DVD late Thursday, with this caption:

Avenatti described the tweet as a “warning shot” at President Trump, his attorney Michael Cohen and anyone else involved in the case.

Daniels is scheduled to appear on CBS's "60 Minutes" on Sunday.

The Department of Justice has proposed amending Bureau of Alcohol, Tobacco, Firearms and Explosives' regulations to make bump stocks fall within the federal definition of a “machine gun.” In doing so, it effectively would ban all bump stocks.

"After the senseless attack in Las Vegas, this proposed rule is a critical step in our effort to reduce the threat of gun violence that is in keeping with the Constitution and the laws passed by Congress," Attorney General Jeff Sessions said in a statement.

President Trump also tweeted about the rule, saying his administration "will BAN all devices that turn legal weapons into illegal machine guns."

President Trump and first lady Melania Trump are headed to West Palm Beach for a weekend at Mar-a-Lago. Air Force One departed Joint Base Andrews at 5:13 p.m. ET.

The President entered the aircraft alone. The first lady was already on board.

President Trump ignored questions on the alleged affairs, as he made his way to Marine One.

Trump avoided reporters, but walked the long way to the visitor pen to shake some hands.

First lady Melania Trump was not with him. She's meeting him at Joint Base Andrews.

Why we're talking about the alleged affairs

Three different cases regarding the President and his alleged relationships with women are simultaneously in different courts.

The first case involves the "Apprentice" contestant Summer Zervos, who says Trump sexually harassed her and who is now suing him for defamation.

Then there is adult film actress Stormy Daniels. She has taken Trump and his personal attorney, Michael Cohen, to court in an attempt to end a nondisclosure agreement that is alleged to require her to keep silent about an affair she had with Trump over a decade ago. Cohen and the White House have denied the affair.

Former Playboy model Karen McDougal is also embroiled in a lawsuit. She is suing the company that kept her original account from publication.

McDougal, in an interview with CNN, confirmed that she had a 10-month sexual relationship with Trump before he was President, saying they were together "many dozens of times."

President Trump and first lady Melania Trump will soon depart the White House and head to West Palm Beach, Florida, for the weekend.

It was busy and newsy week at the White House and on Capitol Hill. Let's look at what happened:

Monday: The President and first lady spoke in New Hampshire about the opioid crisis. He proposed the death penalty for drug dealers and "very bad commercials" to scare kids off drugs. After Trump lashed out at special counsel Robert Mueller's team over the weekend, Republicans warned Trump not to fire Mueller.

Tuesday: Trump said he congratulated Russian President Vladimir Putin on his recent election win, even though he was warned not to do so.

Wednesday: Trump, in a series of tweets, called out Mueller, continuing his recent aggressive attacks on the Russia probe.

Thursday: The morning started off with news that John Dowd, Trump's lead lawyer handling the response to the Russia investigation, had resigned. Trump later unveiled new tariffs on Chinese goods, as a result the Dow plunged more than 700 points. Later that night, Trump took to Twitter to announce that he was replacing H.R. McMaster as national security adviser with former US ambassador and Fox News analyst John Bolton. Former Playboy model Karen McDougal, in an interview with CNN, confirmed that she had a 10-month sexual relationship with Trump before he was President, saying they were together "many dozens of times."

Friday: Congress passed a $1.3 trillion spending bill just after midnight. This morning, Trump threatened to veto the bill. But, in a surprise news conference this afternoon, Trump signed the bill, saying he had "no choice" because of the funds it provides to the military.

The Dow dropped 400 points and stumbled back into a correction on Friday as worries about a trade war with China intensified.

The selling followed a 734-point plunge on Thursday, after President Trump launched a crackdown on China's trade tactics.

The losses Friday put the Dow back into correction territory, 10% below its all-time high in January. The average has lost almost 3,000 points since then.

Far-right media personalities fumed on Friday after President Trump signed a spending bill he previously threatened to veto into law.

They were upset the $1.3 trillion package did not include complete funding for his promised wall along the US-Mexico border.

In a string of tweets, Ann Coulter, a conservative media firebrand who was one of Trump's most outspoken supporters during the 2016 election, skewered the President. After Trump said he would never sign a bill like this into law again, Coulter quipped, "Yeah, because you'll be impeached."

A headline on Breitbart, the far-right website which is generally very supportive of Trump's agenda, said, "RIP BORDER WALL 💀…"

And on the Drudge Report, another conservative news website generally supportive of the President, the banner headline read, "FAKE VETO."

The flood of criticism did not stop there. Other far-right internet personalities, seething on Twitter, voiced similar frustrations with the spending package.

Jim Hoft, the founder of Gateway Pundit, a fringe far-right website that the president has shared stories from in the past, declared the move to sign the package into law "WEAK!" Hoft even went on to suggest that he had muted the sound while watching Trump’s bill signing, tweeting, “It was that bad.”