A Georgia state court dismissed a lawsuit filed by Georgia Republicans to prevent the "unlawful counting of ballots received after the election" in Savannah. They filed the lawsuit after a poll watcher for the party allegedly viewed unprocessed absentee ballots mixed in with absentee ballots that were set to be tabulated.

Judge James F. Bass made the ruling orally in court Thursday morning, and it was filed with the court this afternoon.

The state Republican party and the Trump campaign said they filed the court documents in Chatham County Superior Court on Wednesday evening after a party poll watcher "witnessed absentee ballots that had not been properly processed apparently mixed into a pile of absentee ballots that was already set to be tabulated.The proper chain of custody for the ballots was not followed," they alleged according to court documents.

The ballots in question were small in number: "one stack of three ballots, and a second stack of fifty-three ballots," according to a copy of the filing provided by the state Republican party.

As of 12:45 p.m. ET, there are approximately 50,401 ballots still outstanding across Georgia, according to a statement by Secretary of State Brad Raffensperger.

Fulton County — the largest county in the state and home to Atlanta —has finished processing ballots, the county commissioner said in a news conference.

President Trump's lead in Pennsylvania has significantly gone down in the last 48 hours, with him leading by about 115,000 votes. At one point Trump led by more than 600,000 votes.

What's being counted now are mail-in ballots, which are disproportionately coming in for Joe Biden, King explained. The momentum is currently working in favor for Biden.

In large population centers in the state like in Montgomery County, Biden is outperforming Trump with mail-in ballot counts and we're still waiting for results to come in from Philadelphia, which has 12% of the state's population.

"This is the biggest population center, the biggest basket, if you will, of available votes," King said. "They're still only reporting 83% of votes," he said.

In 2016 Hillary Clinton won 584,000 votes in Philadelphia County. Currently Biden is just 100,000 votes shy of that with votes still to be counted.

"The expectation is that turnout will be up, so it is not unreasonable to think Joe Biden's going to get really close or maybe even higher than that Hillary Clinton total, which is a game-changing event," King said.

King added that the votes are there for Biden.

"Joe Biden is on the trajectory, if he keeps getting those mail-in ballots, the percentages he's been getting over the last 24 hours, the math is certainly within possibility," he said.

Biden campaign manager Jen O’Malley Dillon is urging patience as the results continue to filter in, saying that while the story is going to be "very positive" for Biden, the counting is still happening and it’s going to take time.

“I think the story of today is going to be a very positive story for the vice president but also one where folks are going to need to stay patient and stay calm,” said Dillon. "The counting is happening, it's going to take time. We need to allow it to get done and done well, and we are very confident whatever happens with the counting and the timing we will come out ahead. We are absolutely confident that Joe Biden will be the next president of the United States.”

She said she believes the counting will go "throughout the day and into tomorrow."

“And we are equally confident that we are going to be able to watch the counting throughout the day and into tomorrow to finalize these last states that are going to put us over the top to 270,” Dillon said.

Dillon outlined how the campaign sees the result in each state, cited below. On Arizona specifically, a state two outlets have called but the majority have not yet, Dillon stressed that they expect the race to be close and the margin to grow tighter but ultimately she believes they will win the state by "tens of thousands" of votes.

“It wouldn’t be a presentation if I didn’t say I’m bullish on Arizona. We expected it all along to be close and as we look at the data that’s outstanding we see a number of Democratic counties that are yet to report,” she said. “We do expect the margin to be closing. This is the trajectory. We will win by tens of thousands of votes but that margin will close.”

Remember: Each candidate needs 270 electoral college votes to win the presidency. Based on CNN's projections so far, Joe Biden leads the race for the White House with 253 electoral votes. President Trump has 213 electoral votes. CNN is yet to project a winner in six states.

Officials in Clark County, Nevada, which includes Las Vegas, are set to give an update.

The county has the largest share of votes in Nevada, and was silent on updates yesterday. Across Nevada, Biden holds a slim lead.

There are six electoral votes at stake in Nevada.

A Pennsylvania court ruled that Trump campaign observers could stand closer to watch ballot processing in Philadelphia—a relatively inconsequential ruling that Trump campaign associates quickly touted as being a massive win. Votes that could decide the state are still being counted there.

No court has found wrongdoing in the ballot-counting process in Philadelphia.

“It allows their observers to stand a little closer, but it is not an order that will have any impact on the outcome of the election,” law professor and CNN elections analyst Franita Tolson said Thursday, noting that the decision was “not massive at all.”

Allegheny County will not count any more ballots until tomorrow because of a court order over some 29,000 disputed ballots, according to county officials.

But the county will still be preparing for a resumption tomorrow of the counting.

"They’re processing them. No one has the day off. They’re working,” Fitzgerald told CNN.

There are approximately 36,000 ballots left to count, according to Allegheny Executive Rich Fitzgerald. Beyond the court ordered pile, the county has some 2,800 that were partially damaged and another 4,000 that need to be evaluated because of issues like missing dates or signature problems.

In addition, 500 ballots arrived yesterday that were mailed before the election.

Fitzgerald said the county was told by the governor’s office that statewide there are probably 10,000 ballots that were received on Wednesday after the election.

The order stems from a legal challenge over misprinted ballots that had to be reissued to some voters. The county agreed not to count the potential pool of reprinted ballots until Nov. 6 at 5 p.m. local time, the deadline for receiving mail-in that were sent by election day.

Allegheny County poll workers will not be counting today because the bulk of the remaining pool of ballots in the county are the disputed pile.  Allegheny Executive Rich Fitzgerald said they would be continuing to process ballots on Thursday but they might not be scanning them.

County Council member Bethay Hallam said that the county should put more information out about what is going on.

Hallam added that “there is nothing malicious going on here.” “It is frustrating that there isn’t more information of what they are actually doing today.”

“The Elections Division staff will be using the day to do administrative work,” according to an internal county communication obtained by CNN. They will resume counting on Friday.

UPDATE: This post has been updated with additional details from county officials. 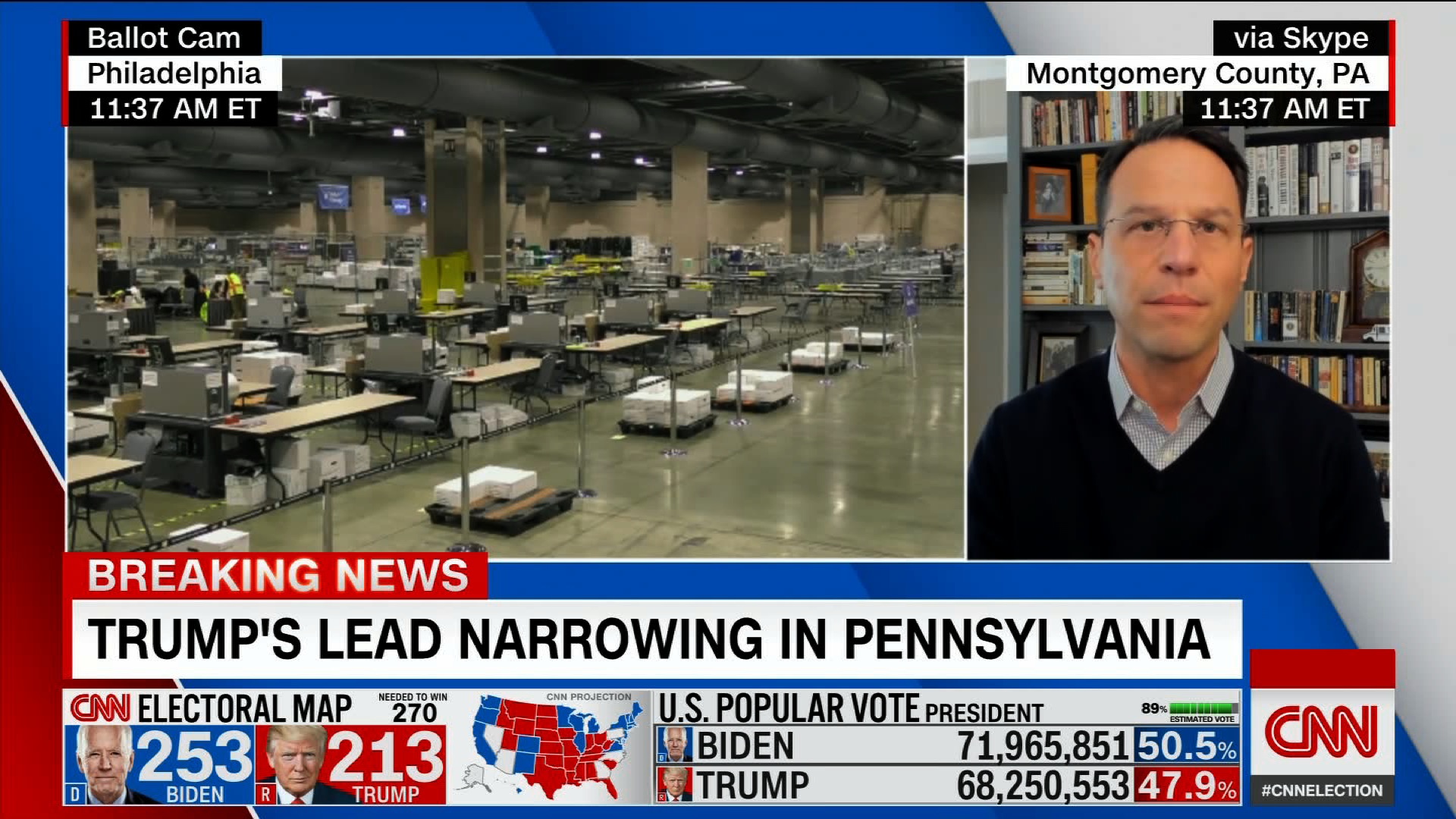 As vote counting continues in Pennsylvania, Attorney General Josh Shapiro said Americans may get a better sense of the result “by the end of the day.”

He said he’s basing this off the secretary of state’s earlier comments where she said the “vast majority of these ballots would be counted by the end of the day today.”

Shapiro also asserted that the mail-in ballots are “every bit as legal as the ballots that were cast on election day.”

The ballots were mailed or dropped at a dropbox at a local government office building “because someone was afraid of Covid and didn't want to stand in line at the polls,” he said, adding that these ballots were processed and are now being counted. “We will follow the law. We're not going to get into any kind of back and forth on the rhetoric or politics. As I said before, the campaign is over. Now it's time to count the votes.”

Workers will “secure, protect and count all these votes,” he assured, adding that regardless of the outcome, the will of the people will be respected.

“Whoever gets more votes in that election will be deemed the winner by the commonwealth. And we will respect the will of the people. That's the law, that's how the process works.”

Why this matters: Pennsylvania is one of the key states CNN is yet to project a winner in. Each candidate needs 270 electoral college votes to win the presidency. Based on CNN's projections so far, Joe Biden leads the race for the White House with 253 electoral votes. President Trump has 213 electoral votes.