Our live coverage has ended. Scroll through the posts below to read more about Trump's visit to Alabama following the deadly tornadoes. 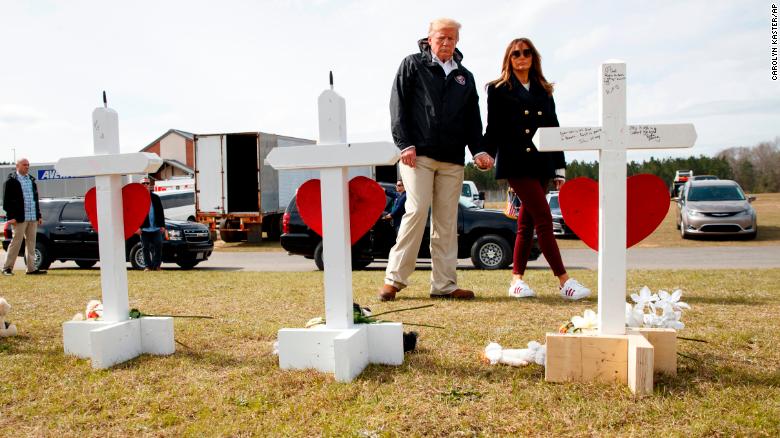 During his visit to Lee County, Alabama, President Trump and first lady Melania Trump stopped at a memorial to honor the 23 people who died during last weekend's tornadoes.

They stood in front of the 23 white crosses, each with a red heart and flowers. The victims ranged in age from 6 to 89.

Funerals will continue this week for the victims. Several donors, including local groups and the Poarch Band of Creek Indians tribe, have donated tens of thousands of dollars to assist in the funeral fund. 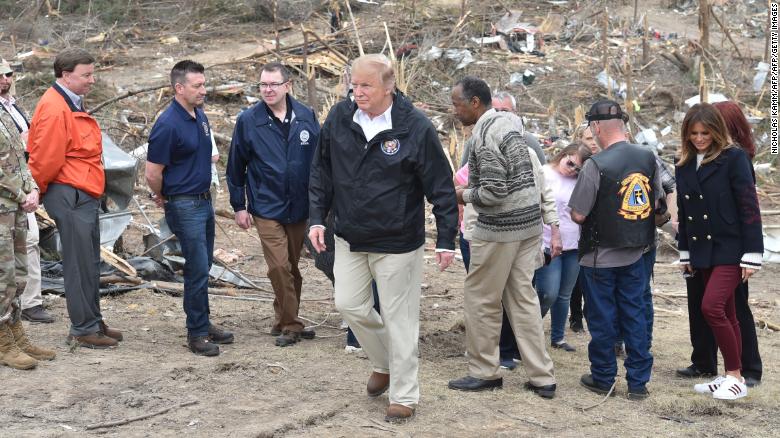 He made a few stops in Lee County, which bore the brunt of the damage, including the city of Opelika and the community of Beauregard. There, he met with survivors and volunteers working on relief efforts. 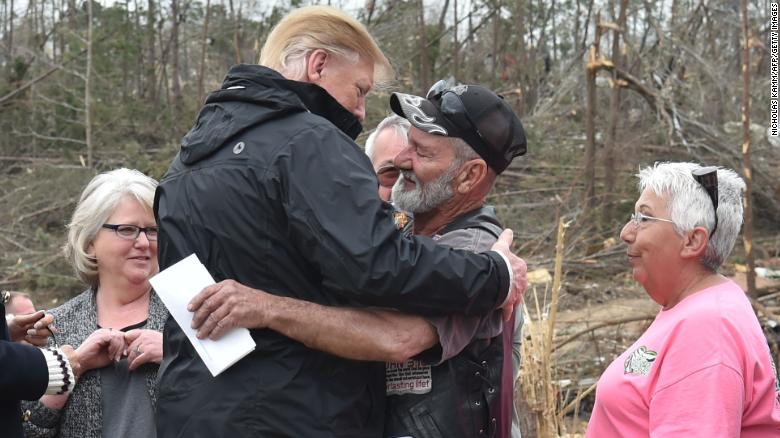 Twelve tornadoes struck the state and about 30 tornadoes hammered the Southeast that day, said Chris Darden of the National Weather Service office in Birmingham. 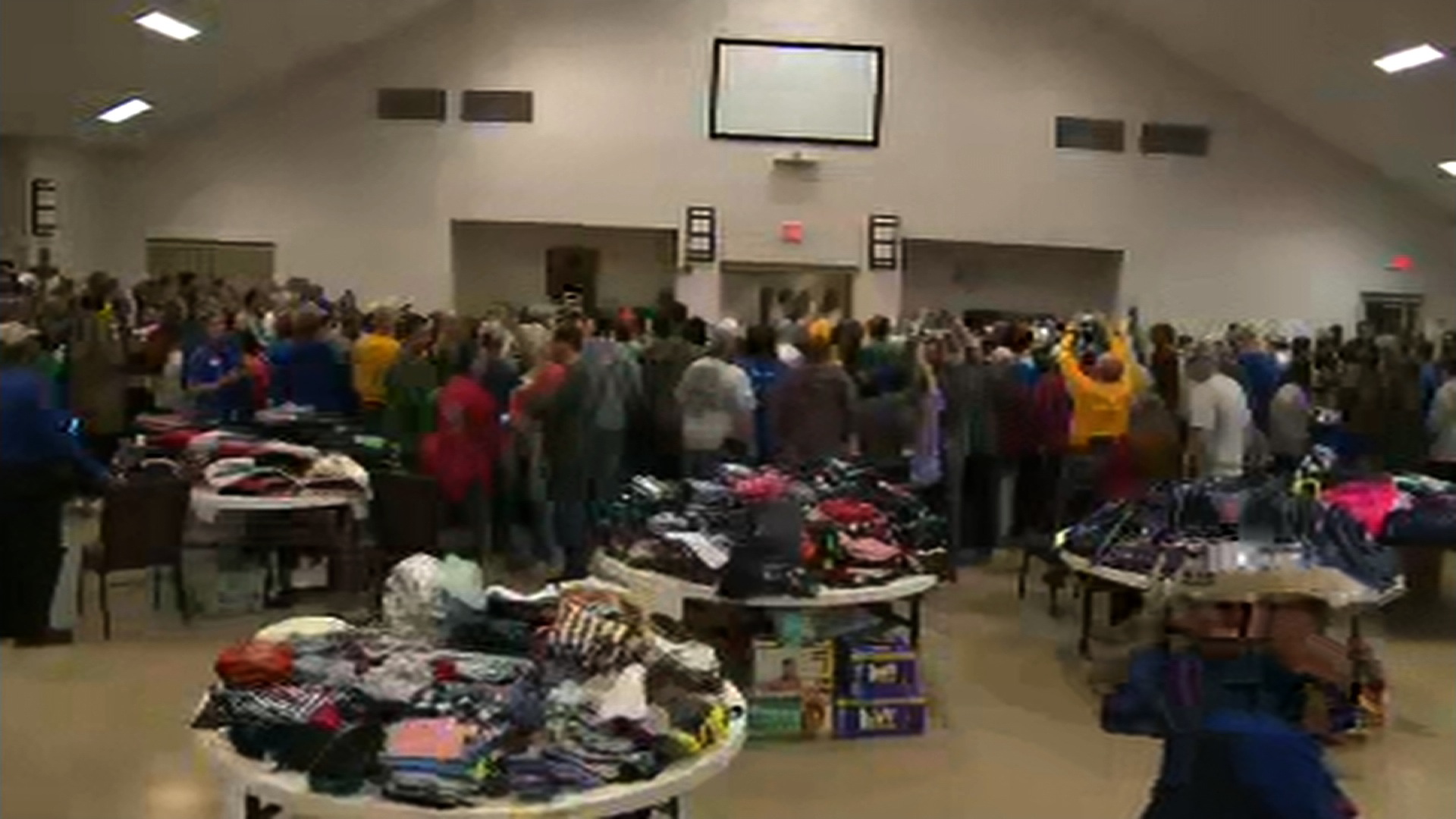 They will meet volunteers and survivors, and thank first responders who are contributing to the the ongoing relief efforts. 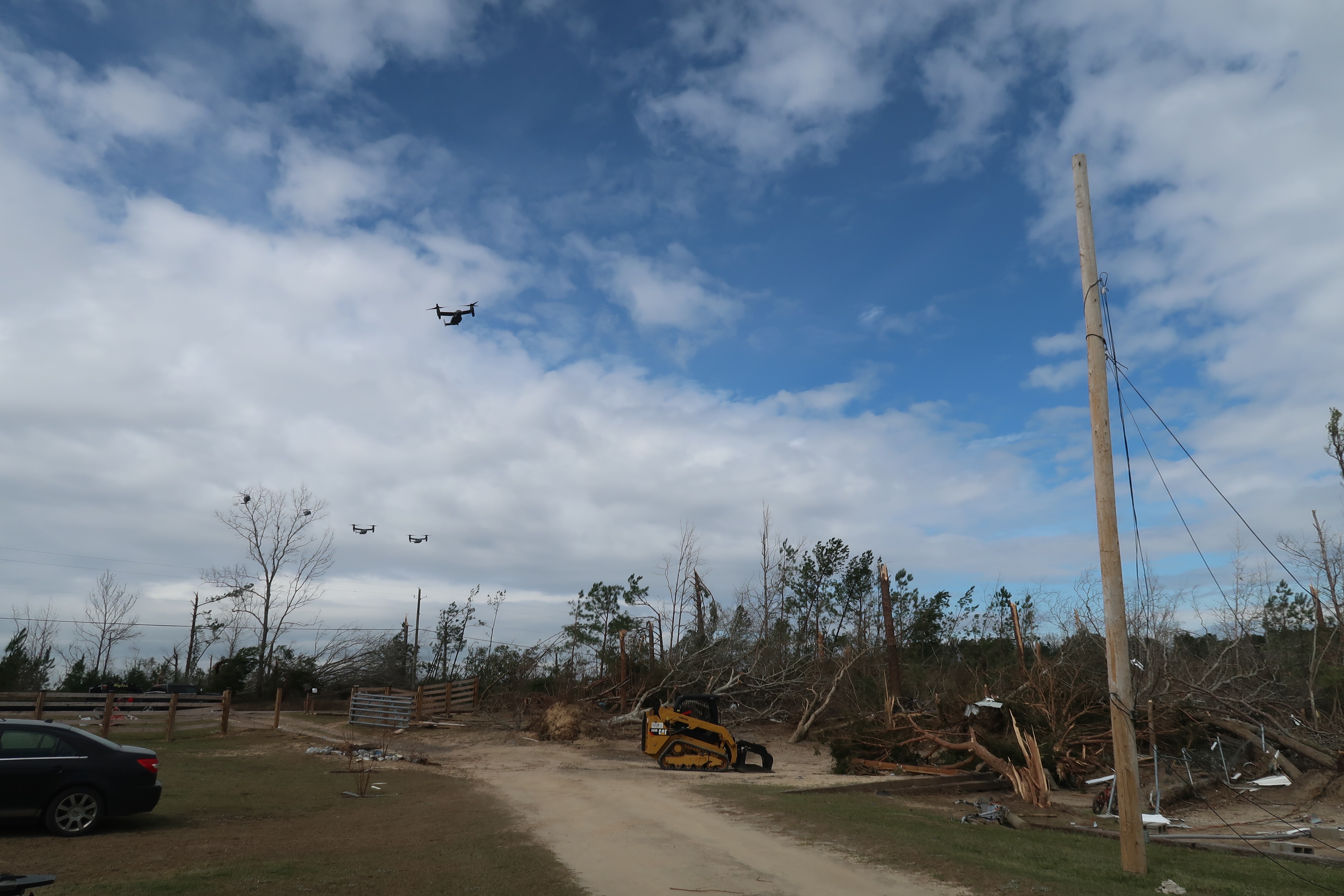 The President and First Lady Melania Trump are meeting with individuals impacted by the recent tornadoes in Opelika, Alabama. 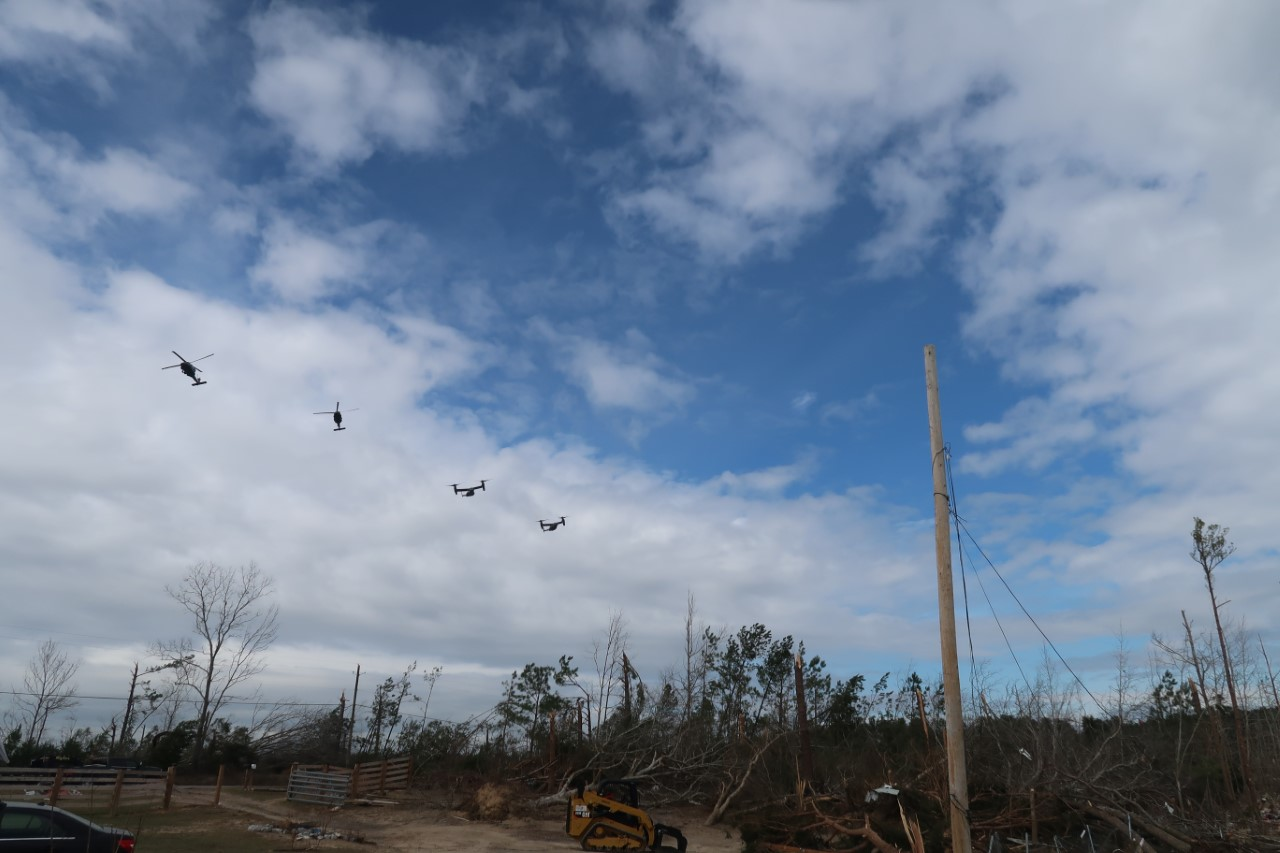 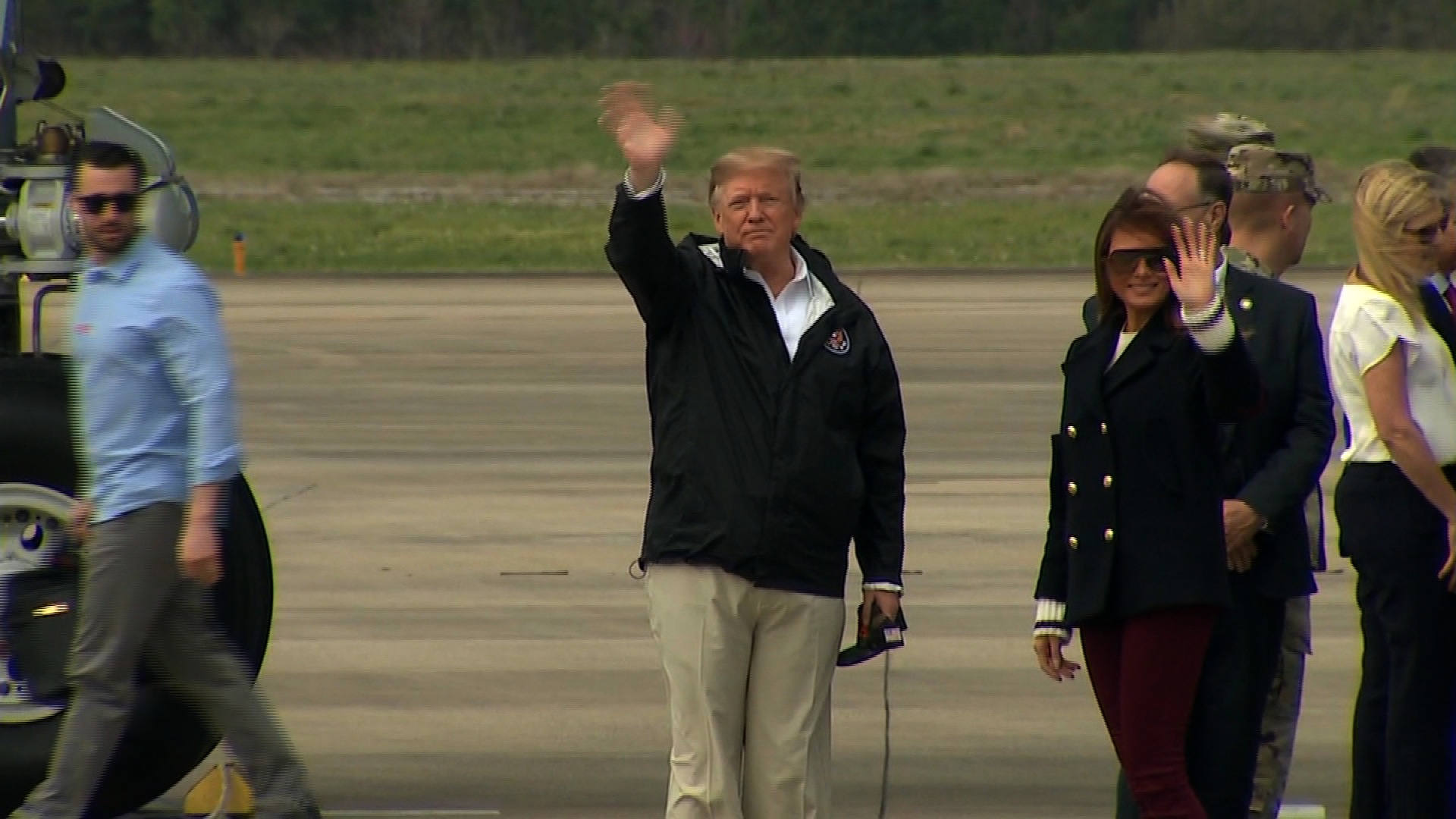 President Trump and the first lady have arrived in Ft. Benning, Georgia, and they will will soon head to Lee County, Alabama, to tour storm damage.

But as they touched down, this news broke: White House communications director and Assistant to the President Bill Shine resigned after just nine months on the job. "Bill continues to support President Trump and his agenda and will serve as Senior Advisor to the 2020 re-election campaign," the White House said in a statement.

President Trump is on Air Force One on his way to Alabama to survey tornado damage, but at the moment his mind is somewhere else.

In a tweet, Trump claimed that his former lawyer Michael Cohen “directly asked” him for a pardon and therefore lied under oath when testifying before Congress last week.

“He lied! Additionally, he directly asked me for a pardon. I said NO. He lied again! He also badly wanted to work at the White House. He lied!” Trump tweeted.

What this is all about: Cohen said in his open testimony before the House that he “never” asked for a pardon.

"I have never asked for it, nor would I accept a pardon from President Trump," Cohen said before the House Intelligence Committee.

The prospect of a pardon for Cohen was raised more than once between Cohen's lawyer and attorneys representing the President, according to multiple sources familiar with the matter. The depth of those discussions — including whether a pardon was truly on the table in exchange for Cohen's cooperation — is being disputed publicly among the different factions.

Cohen told Congress over the past week that his former attorney spoke separately with two attorneys for the President, Rudy Giuilani and Jay Sekulow, about the prospect of a pardon, the sources said. Cohen also testified to Congress that he spoke directly to Sekulow about pardons, according to the sources, which Sekulow denies. 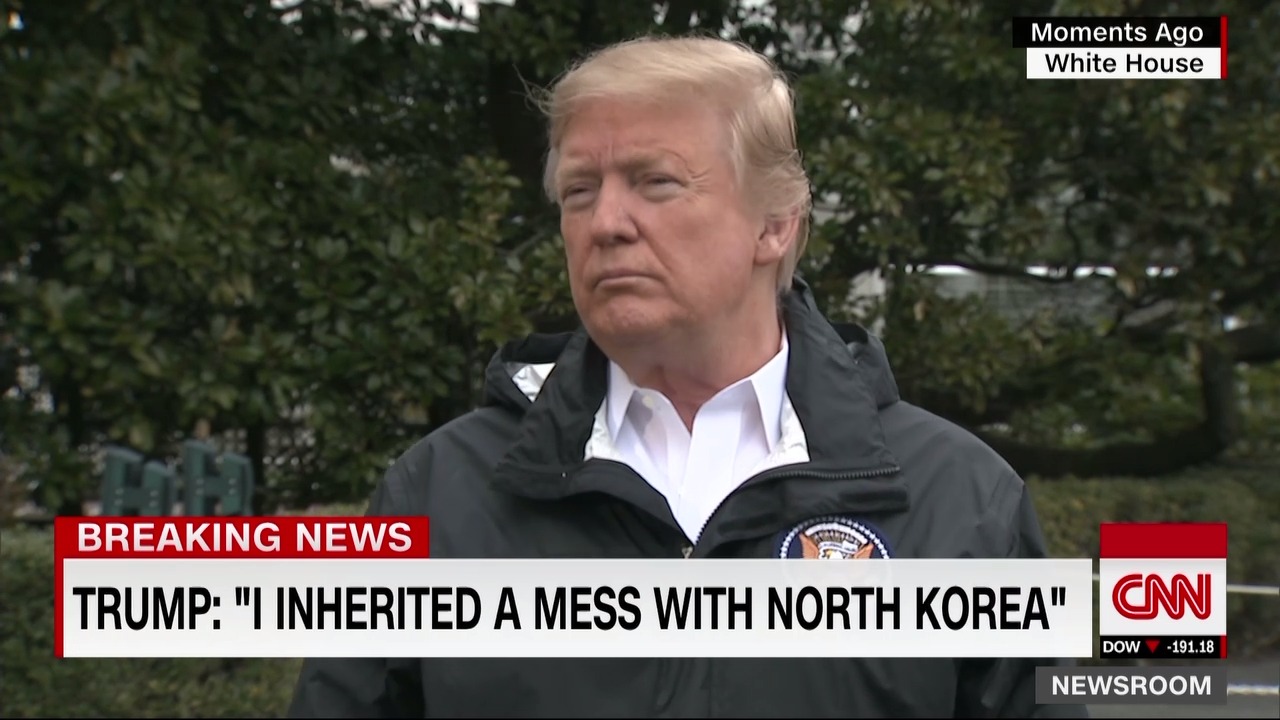 President Trump said Friday that he’d be surprised if North Korean leader Kim Jong Un “did anything that was not per our understanding.”

“Well, time will tell,” Trump said ahead of his departure to Joint Base Andrews. “But I have a feeling our relationship with North Korea, Kim Jong Un and myself, Chairman Kim, I think it’s a very good one. I think it remains good. I would be surprised, in a negative way, if he did anything that was not per our understanding. But we’ll see what happens.”

Trump also said he “inherited a mess” with North Korea.

President Trump reacted Friday to a House vote on a resolution condemning anti-Semitism, saying, without evidence, that the Democratic party is “anti-Jewish.”

“I thought yesterday’s vote by the House was disgraceful because it’s become, the democrats have become an anti-Israel party, they’ve become an anti-Jewish party,” Trump said before traveling to Alabama to tour storm damage.

The House of Representatives on Thursday passed a resolution broadly condemning hate and intolerance, including anti-Semitism and anti-Muslim discrimination, in the wake of controversy over Democratic freshman Rep. Ilhan Omar.

The vote was 407-23. Twenty-three Republicans voted against the measure, and all Democrats — including Omar — who voted voted in support of the resolution.