James Comey: Trump slammed the former FBI director, as a "weak and untruthful slime ball," the day after explosive excerpts from his tell-all book surfaced.

Syria: Top military officials warned Trump that he risks escalating US involvement in Syria  if he goes forward with an aggressive bombing campaign. 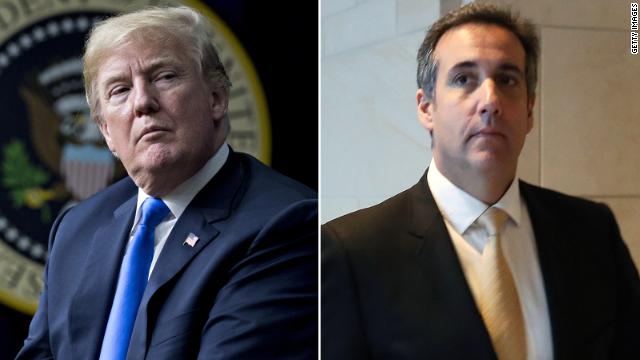 President Trump called his personal attorney Michael Cohen today, according to a source with knowledge.

The revelation came amid a courtroom drama that unfolded today, as Cohen's attorneys and Trump's attorneys began a fight hours before with the US Attorney's Office in Manhattan over a massive raid of Cohen's records.

Cohen's attorneys have filed a temporary restraining order in the matter, asking the court to stop federal prosecutors from using some of the records they seized. Cohen did not appear in court Friday morning and has not been charged with a crime

What Trump is talking about

The inspector general found that McCabe "lacked candor" on four occasions when discussing the disclosure of information for a Wall Street Journal article about the FBI's Clinton Foundation investigation, according to a copy of the report obtained by CNN on Friday.

In addition, the inspector general determined that McCabe was not authorized to disclose the existence of the investigation because it was not within the department's "public interest" exception for disclosing ongoing investigations. The inspector general said that the disclosure to the Journal was made "in a manner designed to advance his personal interests at the expense of department leadership."

The instances the inspector general cited McCabe's conversations with federal investigators and also with FBI Director James Comey in October 2016.

Justice Department Inspector General Michael Horowitz sent his report on McCabe to Capitol Hill on Friday ahead of its expected public release.

After describing Comey’s book as a “desperate PR stunt" and claiming he was looking to “pad his pockets” with “a book that belongs in the bargain bin of the fiction section," Sanders claimed Comey's leaking of documents was "one of the few issues in Washington that both Democrats and Republicans agree on."

President Trump continues to discuss options for responding to a suspected chemical attack in Syria, days after vowing punitive action would happen soon.

She continued: "We're continuing to have ongoing meetings and conversations here at the White House. When we have any further developments within we'll developments, we'll let you know."

In the wake of news that Michael Cohen is under criminal investigation, Sarah Sanders was asked if President Trump still has confidence in the man who long served as his personal attorney and reported fixer.

She said, "I know that the President worked with him as a personal attorney. Beyond that, I don't have anything else to add."

But when asked if he was still the President's personal attorney, Sanders said, "I'm not sure. I would have to check. We only speak about White House staff."

A reporter asked Sanders if Trump was "sending some sort of signal" to the Mueller investigation by pardoning Scooter Libby. She said no, "not at all."

"One thing has nothing to do with the other. And every case should be reviewed on their own merits. Pardoning Libby was the right thing to do after the principle witness recanted her testimony," said Sanders.

White House press secretary Sarah Sanders came out swinging when a reporter asked if President Trump was worried about what James Comey was saying in his interviews with the media.

"Not at all," Sanders said. "The American people see right through the blatant lies of the self-admitted leaker. This is nothing more than a poorly executed pr stunt by Comey."

She added that the fired former FBI director was "padding his pockets with a book that should be in the basement bargain bin," and said, "He'll be known as a disgraced partisan hack that broke his sacred trust with the President of the United States, the dedicated agents of the FBI and the American people he vowed to faithfully serve."

She concluded: "One of the president's greatest achievements will go down as firing Director Comey.