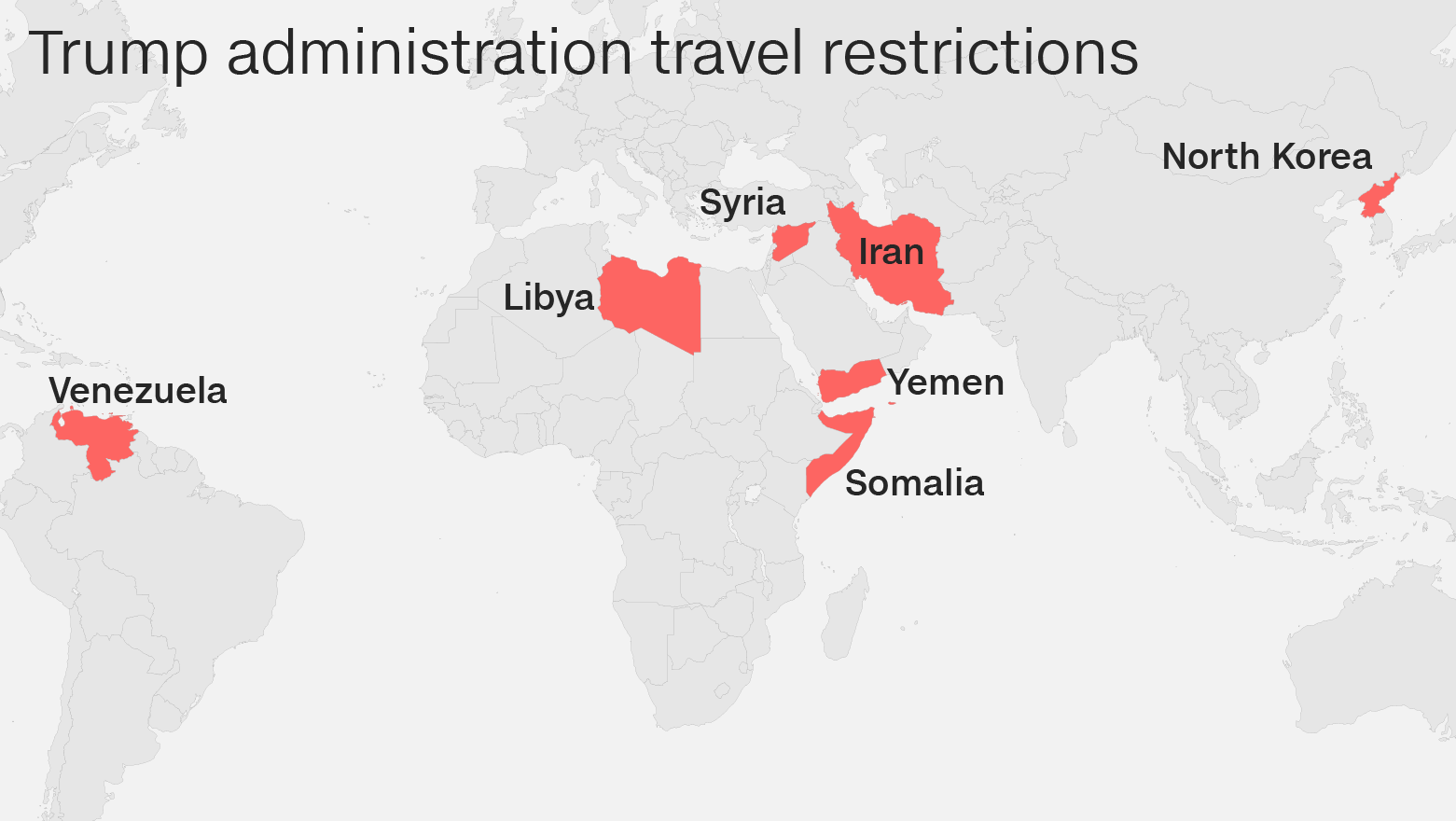 This is the third version of the travel ban. It was issued in September -- after previous bans had ricocheted through the courts -- and restricts entry from the following seven countries to varying degrees:

(Chad was originally on the list but it was recently removed after having met baseline security requirements.)

Supreme Court lawyer Neal Katyal, who represented the state of Hawaii and other challengers in the Supreme Court case involving Trump's travel ban, said he's disappointed with the decision.

He also warned Trump not to take the ruling as "approval to continue attacking our Constitution."

Katyal argued the case before the Supreme Court in April.

During the arguments, he said Trump was claiming limitless authority to exclude anyone he wished and tried to emphasize that Trump's unilateral move to restrict nationals from Muslim-majority countries had usurped congressional power over immigration, in a breach of the terms of the federal Immigration and Nationality Act.

Senate Majority Whip John Cornyn, a Texas Republican, just told CNN the Supreme Court's ruling is a big win for Trump, and disputed critics who said that the ban is not targeting Muslims, arguing it’s been mischaracterized by critics as a Muslim ban.

"This is part of the Never Trump resistance to mischaracterize this as being a Muslim ban, this is not a Muslim ban," he said.

U.S. Travel Association Executive Vice President for Public Affairs Jonathan Grella just sent CNN the following statement, calling on the White House to make clear that "legitimate business and leisure travelers" are welcome in the US despite the ban.

He also said that the "economic stakes" are too high for "the welcome message" to be overlooked.

“Now that the U.S. court system has set guidelines for the president’s executive orders on immigration, we are hopeful that a coherent and durable set of policies can be put into place by the administration."Today's decision should enable the White House to move on to a new messaging phase: making it clear that keeping bad actors out remains a priority, but making it equally clear that legitimate business and leisure travelers are as welcome and desired as ever in the United States."The economic stakes around strong and healthy international travel are too high—and speak too squarely to the president’s priorities of growing exports, jobs, and the GDP—for the welcome message not to become a featured part of the administration’s calculus.”

Ryan Mace, Grassroots Advocacy & Refugee Specialist at Amnesty International USA, called it a "hateful policy" that "has no place in a country that claims to value human rights."

“This hateful policy is a catastrophe all around – not only for those who simply want to travel, work, or study here in the States, but for those seeking safety from violence as well. While this decision doesn’t address the separate and equally harmful ban on refugees, it cruelly traps people in conflict-afflicted countries and prevents them from seeking safety in the U.S. or being reunited with family. Some of the people banned from this policy are fleeing conflicts that the United States has had a direct hand in creating or perpetuating, as is the case in Yemen and Syria. In those cases especially we are essentially lighting a house on fire and locking the escape door shut. This ban, and the anti-Muslim sentiment in which it originated, has no place in a country that claims to value human rights.”

The group added that history "will judge today's decision harshly."

President Trump just issued his first public reaction to the Supreme Court's decision to uphold the third version of his travel ban.

He announced the news and added, "Wow."

At least White House official tells CNN the President sees this as “vindication.”

Sen. Chris Coons, a Democrat from Delaware who sits on the Senate Judiciary Committee, slammed Trump's travel ban in the wake of the Supreme Court decision, calling the measure "discriminatory and counterproductive."

The Supreme Court may have ruled that the President’s travel ban was technically constitutional, but that doesn’t mean that it’s right, that it’s justified, or that it reflects America’s values," Coons said in a statement.

Here's the rest of his statement:

“In the coming weeks, I plan to introduce legislation to make clear that in the United States, we will not tolerate discrimination based on religion or nationality, and I invite everyone who treasures our American values to join me in defending them. The President’s travel ban is not only discriminatory and counterproductive; it stands in direct contrast to the principles embedded in our Constitution and our founders’ vision of a nation where all people are free to worship as they choose. With time, we have made our union more perfect by fighting discrimination in all of its forms, but the Court’s decision today demonstrates that we have a long way to go before we live up to our highest ideals.”

CNN's Manu Raju caught up with Connecticut Sen. Richard Blumenthal, a Democrat, to get his reaction to the Supreme Court ruling.

Here's what the Senator said:

"This nation needs better legislation that will protect us, but uphold our essential liberties. I’m going to review the opinion and see where we should go at this point. Clearly this opinion is by no means the end of this story. It is no solution to either our security or our constitutional issues."

"There is no question, there has to be legislation to protect our essential liberties, our image around the world, which is very much at risk and at stake here. The Congress now has work to do. It cannot simply allow the courts to determine or the president what our future is in this area. There now needs to be legislation. The onus is on us to protect liberties that may be jeopardized by rash or impulsive presidential action and we have an obligation to legislate."