Our live coverage has ended. Scroll through the posts below for Super Tuesday results or read more here.

But there's something else they have in common: Biden spent little to no time at all campaigning in any of these states ahead of the March nominating contest.

Biden never visited Arkansas, Minnesota or Oklahoma since launching his campaign in April 2019. Biden visited Tennessee one time in May for a fundraiser and visited Massachusetts only for finance events, not holding a single campaign rally in the state.

In the Super Tuesday states, which have been projected thus far, Biden only held rallies in North Carolina and Virginia.

Before the week leading up to March 3, Biden held only one rally in North Carolina in October. He joined former Virginia Gov. Terry McAuliffe for a Get Out the Vote event there, but it was not a campaign-sponsored event.

Biden held one campaign rally each in North Carolina and Virginia the weekend ahead of Super Tuesday. Granted, the enthusiasm of the crowds was unmatched to anything Biden had seen in the early states, especially Iowa or New Hampshire, and at least one thousand people came to each event. Compare that to Iowa, where Biden held over 120 public events, including four bus tours.

After his campaign shifted into a new strategy in the state in November 2019, it poured much of its resources and even more of the candidates’ time spent holding events where at times he struggled to fill a room with more than one hundred people. He ultimately came in fourth place in the Hawkeye State.

Votes are still coming in from California and Texas. Meanwhile, Joe Biden and Bernie Sanders are picking up delegates along the way.

Remember: A candidate must earn 1,991 delegates to become the Democratic nominee.

One thing to note: Amy Klobuchar and Pete Buttigieg, who dropped out of the race, also received delegates. Buttigieg got 26 delegates and Klobuchar received seven.

Bedingfield went on to say that people turned out in "droves" to vote for Biden.

"For Joe Biden, the race is about bringing people together. Uniting people. He got into the campaign on a message of uniting the country," she said.

Joe Biden has taken the lead in a tight race unfolding in Texas tonight.

Bernie Sanders and Biden were in a virtual tie earlier tonight, but over the past few minutes, Biden's lead has jumped.

Joe Biden just took a narrow lead in a tight race in Texas.

Biden and Bernie Sanders are going head-to-head in the Lone Star state, which has 228 delegates at stake. 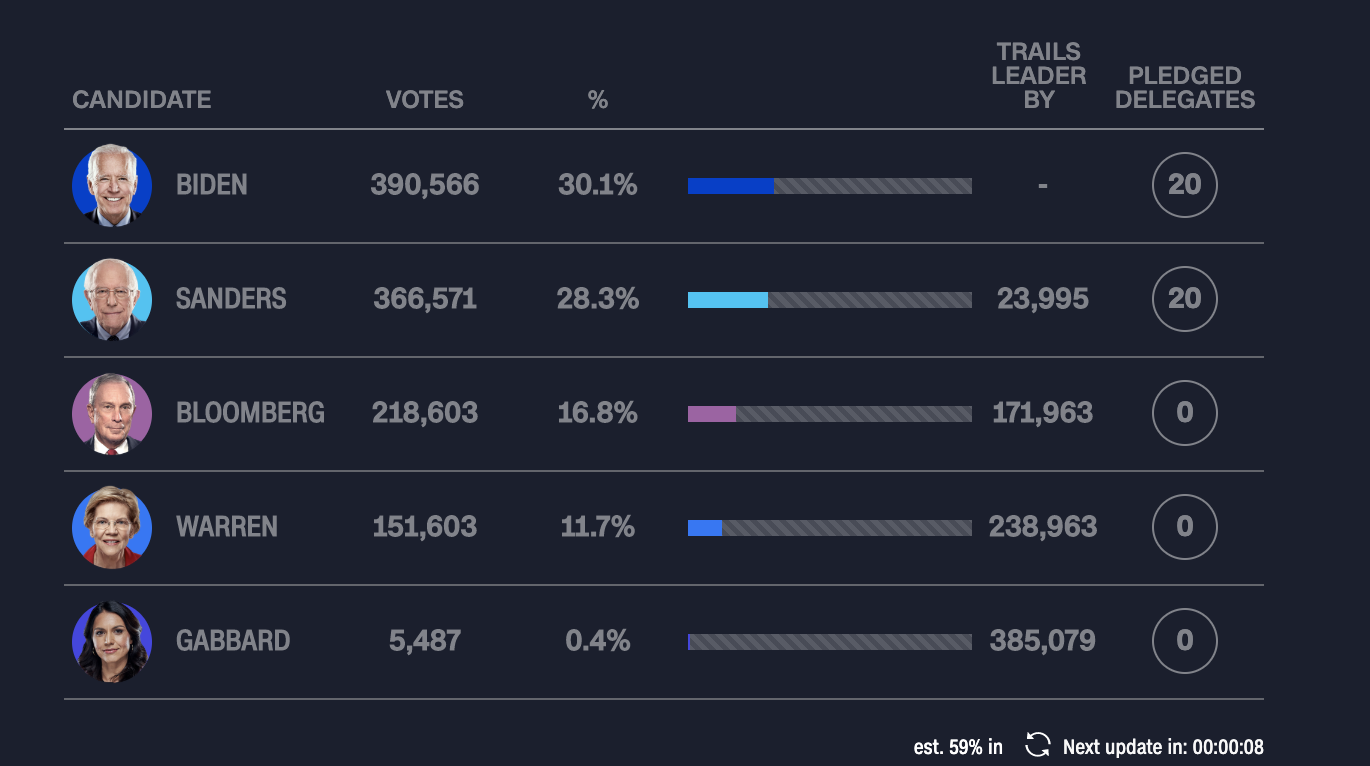 Drama is unfolding in Texas, where Joe Biden and Bernie Sanders are in a virtual tie.

Sanders has a very narrow lead over Biden with 56% of the votes in.

There are 228 delegates at stake in Texas — the second biggest prize of the night. 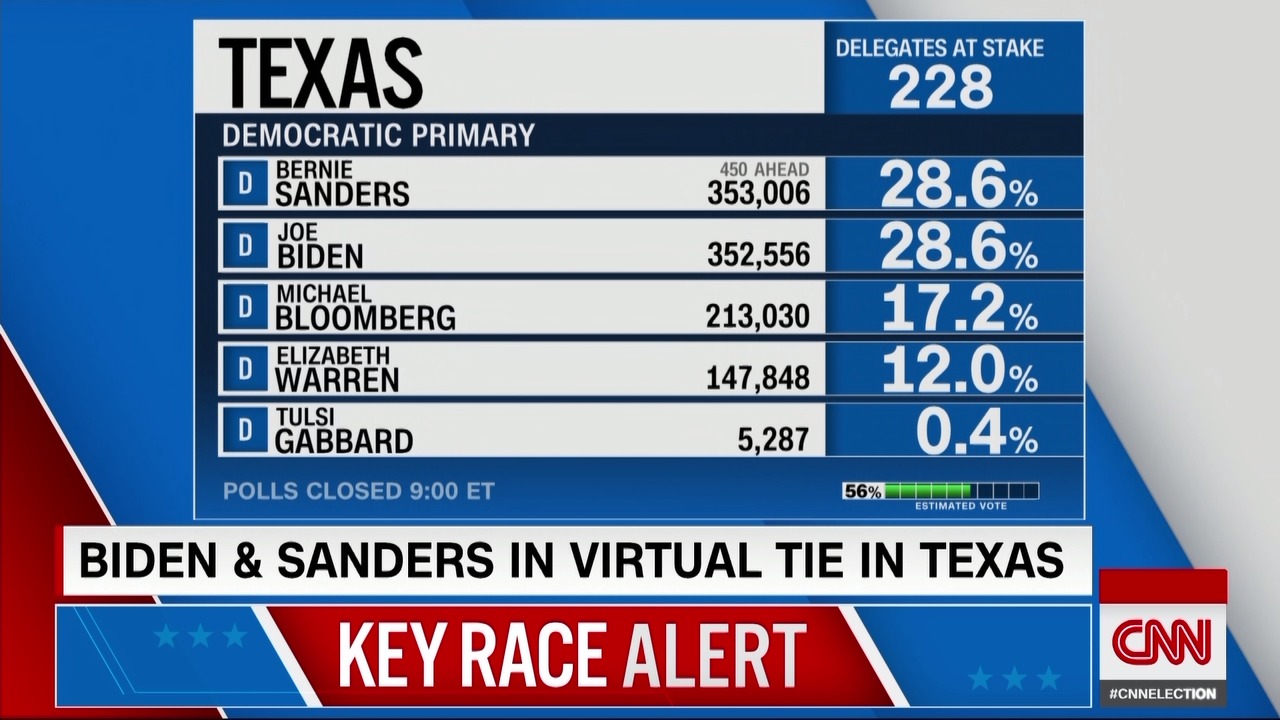 As Joe Biden notched a number of wins on Super Tuesday, Republican strategists focused on down-ballot races had two main reactions: Biden’s success likely makes it harder for Republicans to defeat swing-state Democratic candidates, but it also presages a protracted fight in the Democratic primary that could benefit the GOP in November.

One persistent concern among moderate and establishment Democrats is that if Bernie Sanders is the nominee, it could spell trouble for Democratic incumbents and candidates in House and Senate races across the country. Many of them would be forced to distance themselves from Sanders’ far-left policies.

Two other GOP operatives said they would rather have Sanders as the nominee so they could tie him and his policies to more moderate Democratic Senate challengers — like John Hickenlooper in Colorado, Cal Cunningham in North Carolina, and Mark Kelly in Arizona. Those Democrats might have a tougher time beating endangered Republican incumbents if they have to defend or answer for proposals like Medicare for All or even the “democratic socialist” label Sanders has given himself.

“Preferable to have the socialist with momentum rather than the likable yet bumbling clown,” said one of those operatives.

The other view is that more division and drama in the Democratic presidential primary benefits the Republican Party. The idea here is that while Republicans remain united behind President Trump, Democrats could spend months sniping at each other and sowing distrust between the progressive wing backing Sanders, and the rest of the party, which appears to be coalescing around Biden.

“The longer this primary drama rages on, the better for us,” said the other Republican operative, who is focused on Senate races.

The distrust among Sanders’ supporters for the Democratic establishment, who are increasingly backing Biden, could “be breaking the party apart” in a way that Republicans hope would depress turnout on the Democratic side in November, that second operative said.

“The results only increase the likelihood that no candidate will have enough delegates for a first ballot victory at their convention, which only means more chaos! The media is hyperventilating about Joe Biden but everyone should remember that he is just as terrible a candidate right now as he was a few days ago. At the same time, establishment Democrats have ganged up to try to deny Bernie Sanders the nomination, which is causing even more mayhem,” Parscale said.

“I think a protracted fight is good for Republicans on net,” said the GOP strategist. “But there are advantages to knowing what you’re shooting at sooner rather than later.”

Elizabeth Warren’s poor performance in her home state reflected a loss of support among her core groups: women, white college-educated voters and liberals.

Warren drew only around 1 in 10 women voters in Massachusetts, according to exit polls. That was significantly fewer than projected winner Joe Biden, who led with around a third of women, and Bernie Sanders with 3 in 10.

Around 1 in 5 white college-educated Massachusetts Democrats chose Warren for the nomination -- less than the 3 in 10 who voted for Biden and 3 in 10 for Sanders.

Finally, liberal voters, who might have split between Warren and Sanders, went strongly for Sanders, around 2 in 5, followed by Biden, around 3 in 10. Around 1 in 10 liberals voted for Warren. As in other states, Biden carried those over 65 and moderates in Massachusetts.

Mike Bloomberg has been heavily criticized for his support of the controversial stop-and-frisk policing policy while he was mayor of New York.

But that doesn’t seem to have dampened his support among blacks in Alabama, Massachusetts and Texas.

In all three states, Bloomberg captured a somewhat larger share of votes cast by blacks than by whites.

However, in several other states, the voting ratio was essentially the same. And the former mayor did relatively worse among black voters in Minnesota and Virginia.