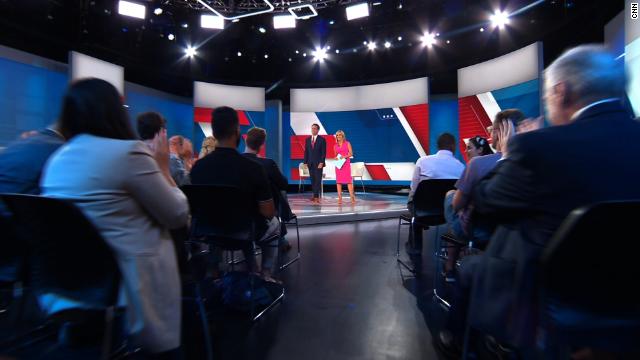 Montana Gov. Steve Bullock said Democrats begging him to run for Senate in 2020 is out of the question, telling the audience at Sunday's CNN town hall that he would emphatically not run against Republican Sen. Steve Daines.

“So that’s an absolute no,” CNN’s Alisyn Camerota asked.

“That’s an absolute no,” Bullock responded.

Bullock said his opposition to running for Senate, in large part, stems from his lack of interest to work in a legislature – something he has never done in his career – and his desire to spend time with his children.

“I know President Obama had dinner with his kids a lot more than I would as a senator from Montana,” Bullock said.

“We’re going to have good candidates in Montana. Not everybody knows everyone in Montana. I’m going to do everything I can to make sure that we elect somebody,” Bullock said. “But for me, part of it is professional. Meaning the whole time I’ve served as an executive, I’ve been able to bring people together to get things done. I think that’s where my talents are best suited.”

As eager as Democrats are to oust President Donald Trump from office, many are worried about the US Senate, where the Democratic Party is currently in the minority. That concern has extended to the presidential race, where a number of Democrats from states with important Senate races are vying for the top job.

Bullock also got the question during a commercial break; an audience member asked the governor why he wasn’t considering it.

“We do have some good people in Montana. I think as we look at this, we also gotta figure out why are we losing places like North Dakota, why are we losing Indiana? Why is it 22 states now completely controlled by Republicans,” Bullock asked.

He added: “To be honest, I have young kids. I would actually never get to see those kids. President Obama ate dinner with his kids a lot more than I ever would, and I can’t miss their whole lives.” 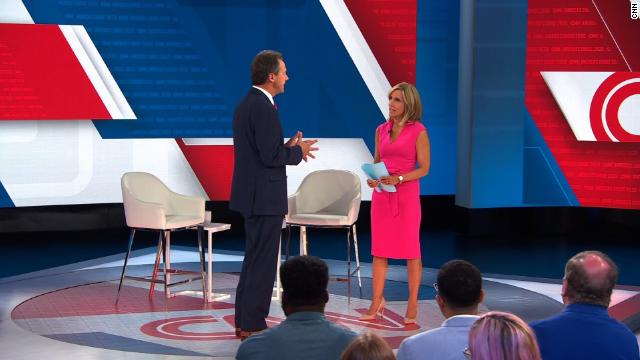 Montana Gov. Steve Bullock defended his opposition to the single payer "Medicare for All" proposal on Sunday in his CNN town hall, setting him apart from more progressive Democrats running for president like Vermont Sen. Bernie Sanders and Massachusetts Sen. Elizabeth Warren.

Bullock said the “greatest stride” the country has made on health care is Obamacare, the sweeping health care law signed by President Barack Obama.

“I don’t think the best way is to start all over. I don’t want to take away employer sponsored health care,” Bullock said. “I look at this as an add-on, not a complete teardown.”

He added: “The way we get to full access and affordability isn’t to start over. It’s to build on what we have.”

Medicare for All would shift control over the health care system to the federal government and essentially eliminate the private insurance industry.

Bullock’s list of concerns also include taxes. He told the audience here in New York that Medicare for All “would increase taxes on everyone in this country.”

Bullock said, as president, he would support a public option and would issue he would all the ability for the federal government to negotiate drug prices, thereby lowering costs. 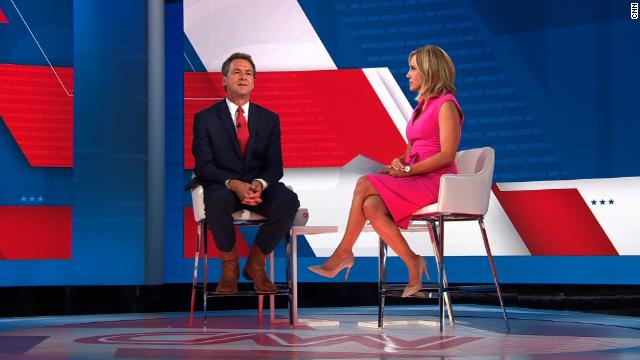 Montana Gov. Steve Bullock said he believed that reaching net zero carbon emissions could happen within the next couple decades.

Bullock said the first step toward addressing the climate crisis would be to rejoin the the Paris climate accord, the 2015 agreement among more than 200 nations to combat climate change.

The United States ratified the agreement, but President Donald Trump announced in June 2017 that the US would withdraw from it — although it cannot formally leave until November 2020.

Bullock went on to slam the Republican party, saying the GOP is "literally ... the only major political party that denies that the climate change is real and human caused."

"We can't wait another 35 years. We need to take immediate and durable steps," he said.

Moments later, Bullock was asked about the coal industry, and if the economic gains the fossil fuel industry brings to his home state of Montana outweigh the climate crisis.

"I think we have to address the climate crisis and we can," he said.

He added that he's the only candidate whose state is directly impacted by the Keystone Pipeline. The next phase of the controversial oil system would run right through Montana. 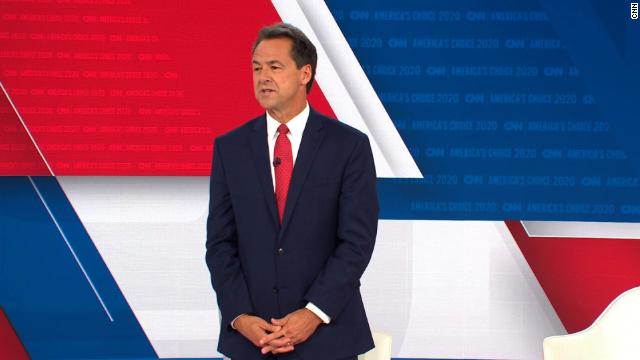 Montana Gov. Steve Bullock explained his support for the death penalty in “very, very limited” cases, a view that is out of step with many of his 2020 Democratic opponents.

“I don’t think like the Oklahoma City bomber or someone that goes into a house of worship (and kills) congregants in prayer and the only reason of killing them is because of the color of their skin, I think they forfeited their right to comfortably live the rest of their life,” Bullock said.

Bullock said he understands that the death penalty has a “disproportionate” impact on people of color.

“I went to law school because I wanted to believe that justice was blind and not based on income,” he said. “And I’ll do everything I can to make sure that’s the case.”

But Bullock said he still supports the death penalty “only in very, very limited areas like domestic terrorism.” 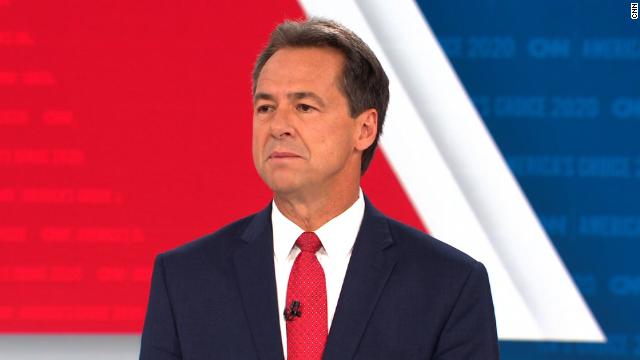 Montana Gov. Steve Bullock blamed the National Rifle Association, an organization that he said was just a “gun safety and hunting organization” when he was young, for stalling any movement on gun control legislation.

Bullock only came out in favor of universal background checks in 2018, far later than most Democrats, and he comes from a state with a proud culture of gun ownership and hunting.

But Bullock explained on Sunday that he softened his position on guns because of the 2018 shooting at Stoneman Douglass High School in Parkland, Florida, that left 17 people dead and listening to his children after the shooting.

“I’ll give you a reason why we can’t look at it as just a public health issue. In fact, I’ll give you 30 million reasons. That’s how much the NRA spent to make sure that Donald Trump was elected,” Bullock said. “When I was growing up, the NRA used to be a gun safety and hunting organization. Now it’s a dark money field, political organization, that does nothing than drive us apart.”

“What I propose is voluntary buybacks,” Bullock said. 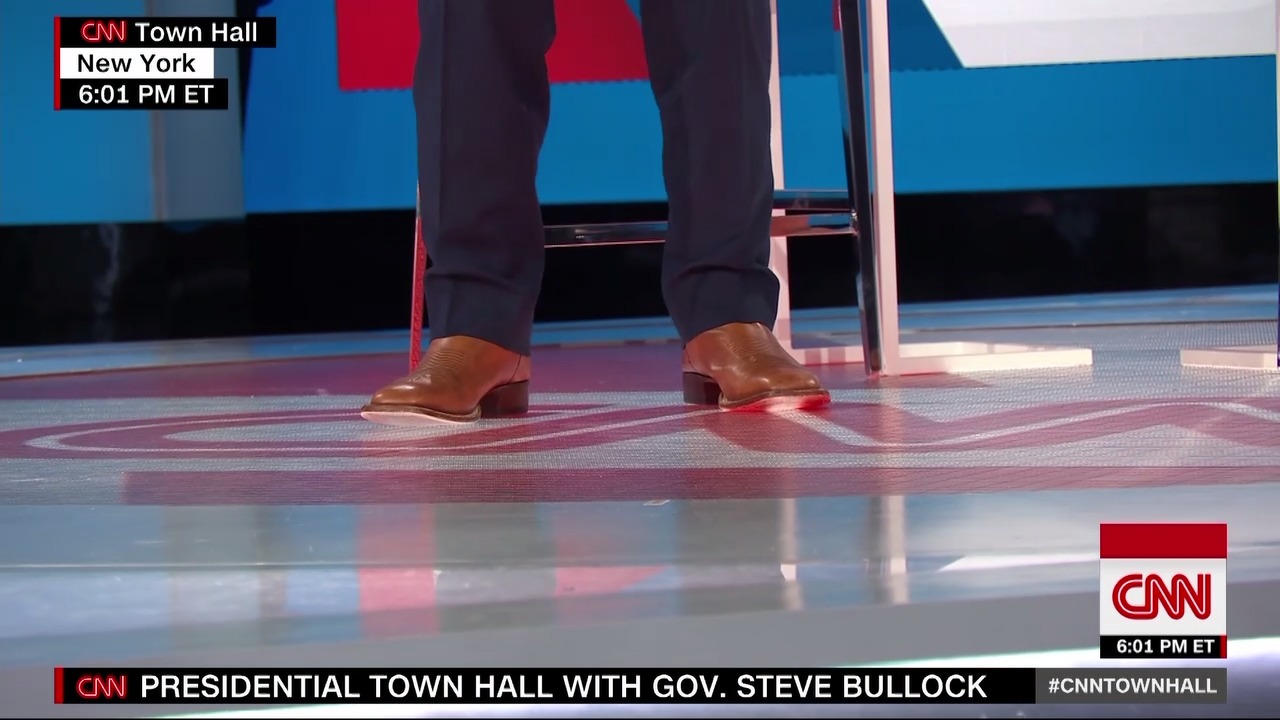 He said the footwear were a gift for his "year of service to our nation's governors."

Steve Bullock served as Montana's attorney general before being elected governor in 2012.

His presidential campaign announcement video highlighted his successful efforts to expand Medicaid, his support for same-sex marriage and his bipartisan effort to ban dark money from the state's politics.

Here's where the Democrat stands on key issues:

Climate crisis: Bullock has praised the Green New Deal, the broad plan to address renewable-energy infrastructure and climate change proposed by Rep. Alexandria Ocasio-Cortez of New York, for “building up conversation” on combating climate change, but he’s stopped short of endorsing it. “We can do better with a more focused plan,” he told The Washington Post in June. The governor supports rejoining the Paris climate accord, the landmark 2015 deal on global warming targets that Trump has pledged to abandon, and believes many of the goals can be achieved more quickly than outlined in the accord. Bullock believes the US can reach zero emissions before 2050.

The economy: The governor has said he would end Trump’s trade war, which he says hurts rural communities. Bullock’s campaign told The Atlantic that he now opposes how the Trans-Pacific Partnership — an 11-nation trade deal negotiated under Obama that the Trump administration has withdrawn from — was written. Still, a campaign spokesman told The Atlantic he believes the withdrawal has left America “on the sidelines.” Bullock supports raising the federal minimum wage to $15 an hour.

Education: To make college affordable, Bullock has proposed freezing college tuition in Montana and floated reducing the federal student loan interest rate. He also supports expanding eligibility for Pell grants. Bullock has said he believes in providing a path so two-year college is “available for all” but noted in a May interview that “we’ve also got to recognize that not everybody’s going to go to college,” pushing instead for professionally recognized certificates and apprenticeships.

Health care: Bullock opposes Vermont Sen. Bernie Sanders’ "Medicare for All" proposal, which would create a government-run health care plan and essentially eliminate the private insurance industry. Instead, Bullock says, the Affordable Care Act should be improved. He supports a buy-in public option for health care while keeping private insurance.

Immigration: Bullock has advocated continuing Obama-era protections for undocumented immigrants who were brought into the country as minors, and he is one of 11 governors who urged Congress in 2017 to support these immigrants. In 2018, after Trump signed a memo to send National Guard troops to the US-Mexico border, Bullock refused to deploy guardsmen.

Gun violence: Bullock supports banning so-called assault weapons and limiting access to high-capacity magazines. He supports universal background checks and so-called “red flag” laws, which allow families and police to petition a judge to temporarily block someone’s access to firearms if there is credible concern they might hurt themselves or others. Additionally, he supports age minimums for those who can purchase firearms.

New York City Mayor Bill de Blasio entered the Democratic presidential race hoping to convince voters that he, as the head of the nation’s largest city, was the most accomplished progressive in the field of hopefuls.

De Blasio has seen more success than some – he qualified for both the June and July debates – but the mayor is still looking for a breakout moment to move him from the pack of candidates hovering under 1% support.

De Blasio has looked to tout a slate of policy wins in New York – namely guaranteeing universal pre-K and a $15 minimum wage – as examples of what he would do for the nation as president.

De Blasio has been mayor of New York since 2014, when he overwhelmingly won the office in the 2013 election. The mayor, in another convincing win, won reelection in 2017. Prior to being mayor, de Blasio was the city’s public advocate and a member of the New York City Council.

The mayor has been far more aggressive than most of his opponents, regularly slamming other candidates for perceived missteps. His most frequent target is former Vice President Joe Biden, who the mayor has attacked for nostalgic comments about Southern segregationist senators and views on abortion.

The strategy has done little for the mayor, though, who looks unlikely to qualify for the Democratic National Committee debate in September. 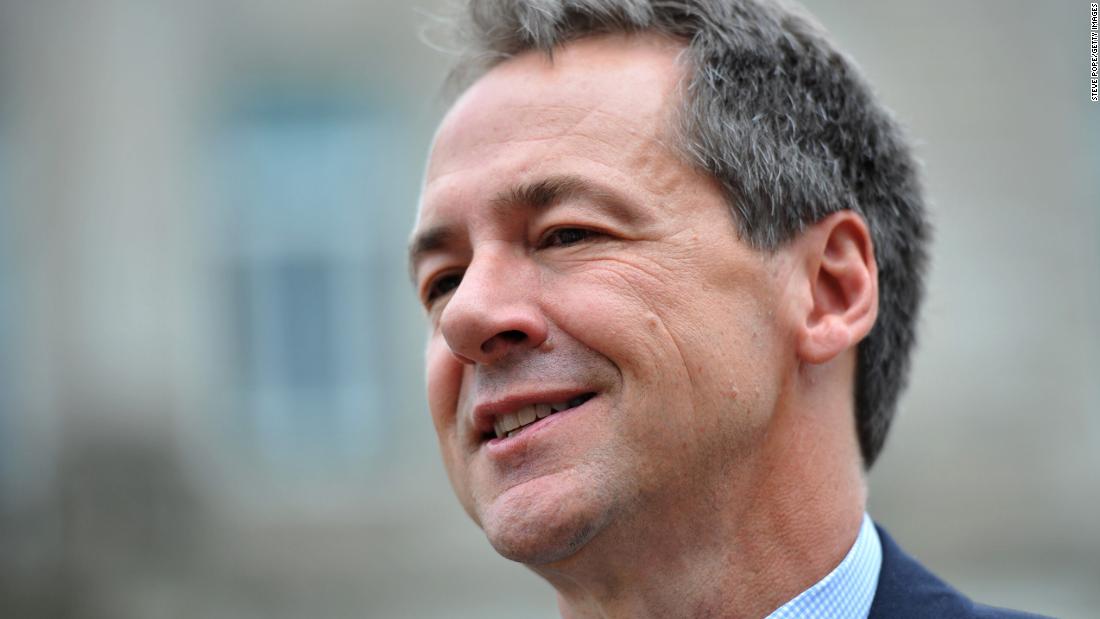 Montana Gov. Steve Bullock, a candidate who got into the race in mid-May, far later than most of his competitors, has a clear goal: Convince Democratic voters that the way to beat President Donald Trump is by nominating a Democrat who has been successful in a state that overwhelmingly supported the President in 2016.

Bullock is a two-term governor from Montana: He won his first term in 2012, but his calling card came when he – as a Democrat – won reelection in 2016, the same year Donald Trump won Montana by 23%.

Bullock is a lifelong Montanan, a fact he has highlighted throughout this campaign. He first ran for office in 2000, when he lost the Democratic primary for Montana attorney general. Bullock entered private practice after that loss -- including a stint working in Washington, D.C. -- before he ran, this time successfully, for attorney general in 2008. After one term as attorney general, Bullock successfully ran to become Montana's governor in 2012.

While Bullock is a more moderate Democrat – taking positions that, in large part, reflect his state’s electorate – the governor has been a leader on campaign finance reform. He also entered the 2020 race late because he worried that a presidential campaign would imperil his successful campaign to expand Medicaid in Montana.

Bullock’s campaign has focused intently on Iowa, where the governor and his team believe his brand of liberalism can resonate with rural voters throughout the state. Most polls, however, have the governor at 1% in the state.