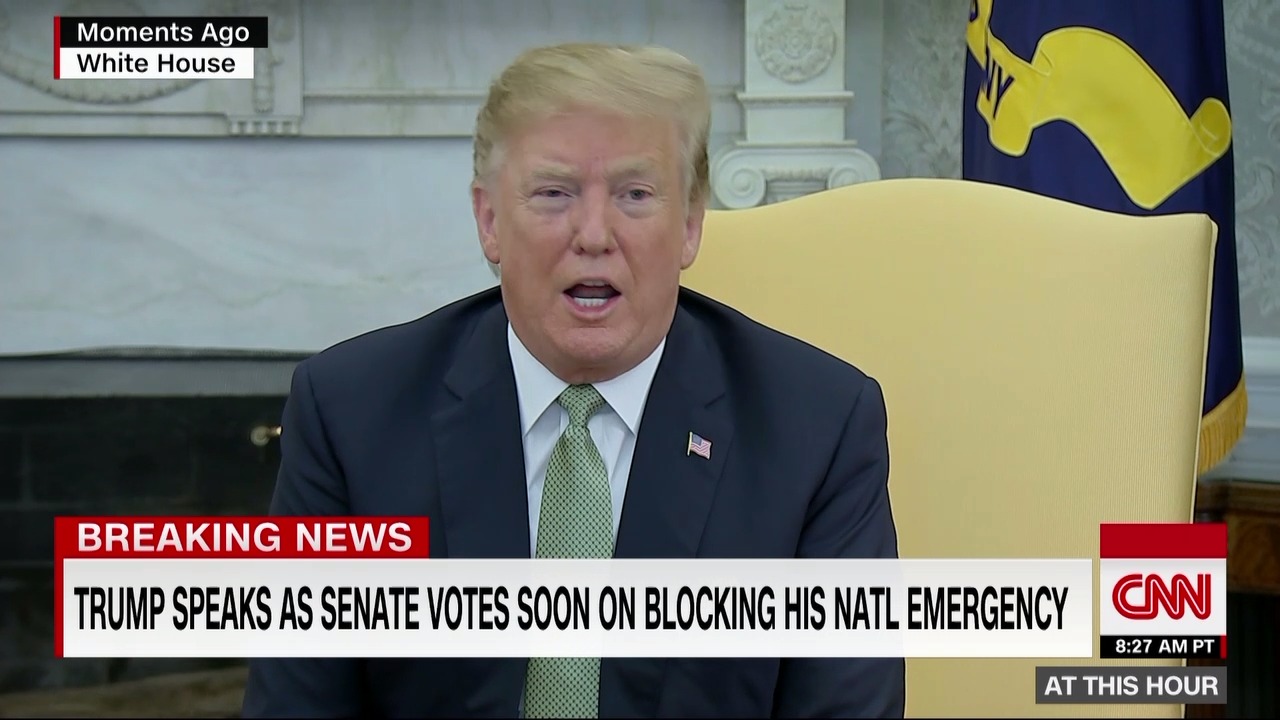 President Trump, speaking to reporters in the White House, said he will "probably have to veto" a resolution that would block his national emergency.

The Senate is expected to vote on the measure this afternoon.

"I don't know what the vote will be. It doesn't matter. I will probably have to veto," Trump said.

If he does veto the legislation, it would be his first as President.

Senate Republicans were caught off guard by President Trump’s tweet that he would support future changes to limit his authority on national emergencies, according to multiple aides — but it’s unlikely it will have a significant effect on the final vote count.

“Too little, too late,” one senior GOP aide said.

It may sway a few on-the-fence senators, but the resolution is still expected to pass with a number of GOP defections.

After spending Wednesday trying (unsuccessfully) to schedule a meeting with President Trump, a trio of Republican senators went the the White House last night to present Trump with a proposal related to his national emergency declaration.

Sens. Lindsey Graham and Ted Cruz were among the group of three senators who visited the President last night at the White House in a last-ditch effort to discuss concerns about the upcoming vote on his emergency declaration, sources familiar with the meeting confirmed to CNN.

The GOP lawmakers had tried earlier in the day to get an audience with Trump so they could discuss the vote, but White House staff prevented the meeting from taking place.

President Trump, in a reversal, said in a tweet Tuesday he would support future changes to the National Emergency Act.

"If, at a later date, Congress wants to update the law, I will support those efforts, but today’s issue is BORDER SECURITY and Crime!!! Don’t vote with Pelosi!” Trump tweeted.

What this is all about: Republican senators have attempted to get Trump to commit to a bill to limit the President’s authorities on national emergencies in the future, but he has rejected those efforts.

Had Trump agreed, GOP senators predicted Republican defections on the resolution to terminate the national emergency would drop significantly.

What it means: It’s completely unclear what, if any, effect the tweet will have on the vote total, which has been trending away from the President. The tweet, which followed a fresh veto threat on the resolution earlier this morning, caught Senate GOP aides off guard.

"This is a vote for the Constitution and for the balance of powers that is at its core," he said in a statement. "For the Executive Branch to override a law passed by Congress would make it the ultimate power rather than a balancing power."

Romney noted that his vote is not one "against border security," and he said he agrees there needs to be a physical barrier on the border.

“I will vote today for the resolution of disapproval. This is a vote for the Constitution and for the balance of powers that is at its core. For the Executive Branch to override a law passed by Congress would make it the ultimate power rather than a balancing power.
“This is not a vote against border security. In fact, I agree that a physical barrier is urgently needed to help ease the humanitarian crisis at the southern border, and the administration already has $4.5 billion available within existing authority to fund a barrier – even without an emergency declaration.
“I am seriously concerned that overreach by the Executive Branch is an invitation to further expansion and abuse by future presidents. We experienced a similar erosion of congressional authority with President Obama’s unilateral immigration orders – which I strenuously opposed. In the case before us now, where Congress has enacted specific policy, to consent to an emergency declaration would be both inconsistent with my beliefs and contrary to my oath to defend the Constitution.”

If you're wondering when this vote will kick off today, note that nothing is official until Majority Leader Mitch McConnell announces it on the floor.

That said, aides in both parties say the target is in the early afternoon — sometime after lunch.

One more note on timing: This will be the last vote before a week-long congressional recess. Senators don't want to prolong this process any longer than they procedurally have to.

Sen. Lindsey Graham and two other GOP senators visited President Trump last night at the White House to discuss concerns about the national emergency declaration vote, a source familiar with the meeting confirmed to CNN.

The visit came as some Republican senators prepare to join Democrats in rejecting Trump’s use of emergency powers, and after some GOP lawmakers tried yesterday and into last night to convince Trump to support some kind of proposal that would assuage concerns about future abuse of executive authority.

There is anxiety ahead of the vote today as White House aides brace for the resolution of disapproval to pass. Aides don’t know how many Republicans will break with Trump, but one White House official said they don’t anticipate more than 67 lawmakers voting for the resolution, which would create a veto-proof majority.

The last-minute Wednesday night meeting was first reported by the Washington Post.

While we know that some Republicans will defy the President, we're still not sure how many will. As is often the case with votes like this, there are a good number of senators who have kept their powder dry on how they will vote.

As one senior GOP aide explained: “There’s no reason to put a target on your back while talks are still ongoing and there’s still some shot of a way out.”

Nothing is official until a senator gives a thumbs up or down on the floor — but here’s a rough outline of who to watch today, based on conversations with GOP senators and aides:

Keep an eye on:

The White House is bracing for an embarrassing rebuke when the Senate votes on a resolution to overturn President Trump’s national emergency declaration Thursday. Despite the pressure campaign they waged for the last week, Trump’s top aides now say as many as 14 Republican lawmakers are poised to break with the President.

Trump has told his staff he’s resigned to issuing his first veto after it became clear over the past day that enough Republicans will support the measure. Now, his focus is stemming the margin by which the bill will pass. Trump hopes the number of “yes” votes will stay below 60, a symbolic margin that he believes would save some embarrassment though still require him to use his veto pen.

In internal conversations, Trump has characterized the vote as a loyalty test, even though some of those who say they will vote for it — including Republican Sens. Mike Lee and Rand Paul — have proven to be allies on other issues in the past. Even as members of his staff were focused Wednesday on managing the Boeing plane crisis, Trump himself remained preoccupied with the looming vote, according to people who spoke with him.

Trump had accepted the likely defeat, but remained intent on knowing who would vote with him and who would break ranks.