The Supreme Court delivered a blow to President Trump Thursday when it blocked the administration's attempt to end an Obama-era program shielding undocumented immigrants who came to the US as children from deportation.

The long-anticipated ruling provides hundreds of thousands of recipients of the Deferred Action for Childhood Arrivals program temporary relief, however, it doesn't rule out future attempts to terminate the program.

The program, established in 2012, protects undocumented immigrants who were brought to the US as children from deportation and allows them to work legally in the US. Recipients are required to renew their protections every two years. The program doesn't provide permanent protection or a pathway to citizenship.

There are nearly 650,000 DACA recipients, the majority of whom are from Mexico.

Here's what to know:

What does the SCOTUS decision mean for DACA recipients?

The decision provides some reprieve to the thousands of people enrolled in the program. For now, beneficiaries of the program can continue to live and work in the United States without fear of deportation. It's unclear whether the administration will be required to take new applications.

What did the justices say?

The 5-4 ruling was written by Chief Justice John Roberts and joined by Justices Ruth Bader Ginsburg, Elena Kagan, Stephen Breyer and Sonia Sotomayor. The ruling emphasizes that the administration failed to provide an adequate reason to justify ending the DACA program.

"We do not decide whether DACA or its rescission are sound policies," Roberts wrote in the majority opinion. "The wisdom' of those decisions 'is none of our concern.' We address only whether the agency complied with the procedural requirement that it provide a reasoned explanation for its action."

But the majority opinion will send the case back down to the lower courts which could be dealing with the case until after the election.

Will DACA stay in place indefinitely?

The Supreme Court's ruling Thursday was specific to how the program was rescinded, not the program's legality. It's possible, then, that the Trump administration could go back and try to end DACA again, but they have a narrow window to do so given the upcoming election. Roberts acknowledged that possibility.

"The appropriate recourse is therefore to remand to DHS so that it may consider the problem anew," Roberts wrote, citing failures by the administration to in part consider the hardship to DACA recipients.

"The basic rule here is clear: An agency must defend its actions based on the reasons it gave when it acted. This is not the case for cutting corners to allow DHS to rely upon reasons absent from its original decision," he wrote.

Professor Stephen Yale-Loehr of Cornell Law School explained: "The administration may try to terminate the DACA program with a better justification, but that will take months or years."

Why can't DACA recipients get legal status through other means?

Many undocumented immigrants who fall under this group are unable to obtain legal status on their own because they were either brought into the country illegally or they overstayed their visas. That often precludes them from becoming a lawful permanent resident because one of the requirements is having entered -- and resided in -- the country legally.

Can Congress give recipients protection?

The short answer is yes and unlike the DACA program, it'd be permanent. But moving legislation during an election year will be challenging and the issue is likely to face an uphill battle in the Republican-controlled in Senate.

It's been a year since the US House of Representatives introduced and passed a bill that would in part provide a pathway to citizenship for DACA recipients, but it hasn't come up for a vote in the Senate. 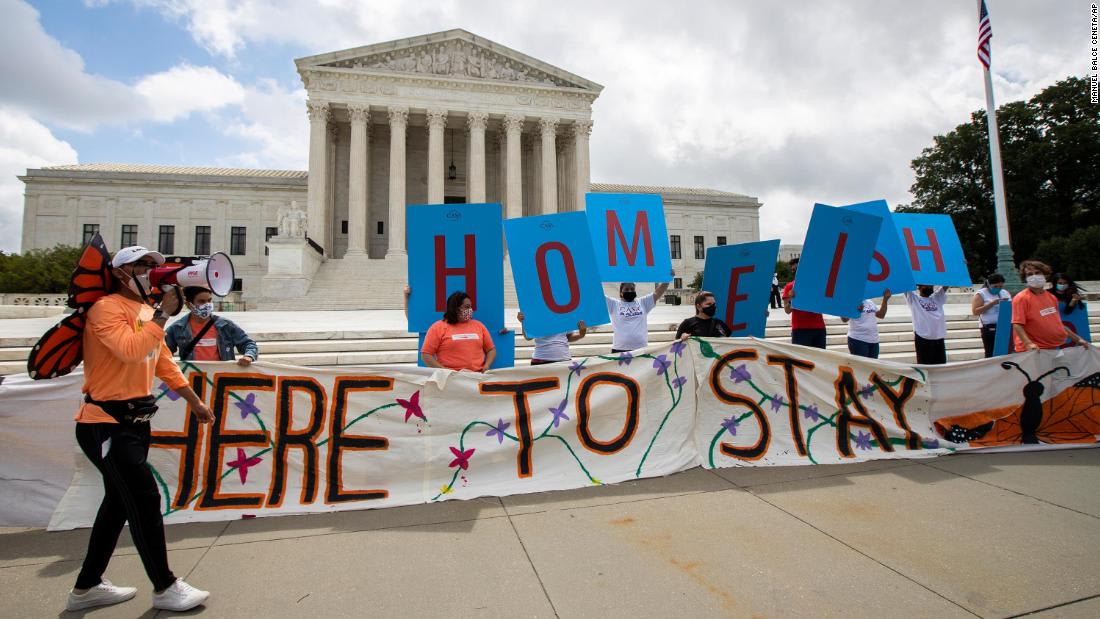 What the Supreme Court's ruling means for DACA participants and immigrants

Codognolla told CNN’s Brianna Keilar that he came the United States with his family when he was 9 years old from Brazil and that his life has been in “limbo for a years now.”

“Trump has attacked the DACA program and so our lives have been in limbo. And so, today is a moment of celebration. I took a sigh of relief, and I was able to call my parents and loved ones and really share with them the news," he said.

The court’s ruling emphasized that the administration failed to provide an adequate reason to justify ending the DACA program.

The Trump administration could move, again, to try to rescind the program, but this time the administration will have to provide a better explanation grounded in policy for its reason for termination.

“Today, for the next 24 hours, I’m in celebration. But the work doesn’t stop here,” Codognolla said.

He added that the administration could remove their protective status at any moment and there are still concerns about the larger undocumented community.

“We still need legal protections for the undocumented community. DACA left a lot of people out of the program. And so, we always knew and understood that DACA was temporary fix … We’re cautiously celebrating because the Trump administration can end the program, try to end the program again any minute,” Condognolla said.

Condognolla said that he will continue to fight for a permanent solution.

The University of California and California State released statements praising the Supreme Court's decision on DACA. Both academic institutions called for urgent legislation to create a permanent solution for DACA recipients.

“Justice and the rule of law won the day,” UC President Janet Napolitano, who helped create DACA when she served as secretary of Homeland Security under President Obama, said. “The Supreme Court’s decision to uphold the University of California and the California attorney general’s challenge against the Trump administration’s capricious action is a victory for hundreds of thousands of young people who are making vital contributions to their families, schools, employers and the nation.”

The university's statement said, "The next step is for Congress to enact permanent protection for DACA recipients that will provide a pathway to citizenship."

California State University Chancellor Timothy P. White called the SCOTUS decision an "important victory" but said "it does not protect the program from further challenge, nor does it provide a permanent solution to allow our Dreamers to achieve their aspirational goals."

"The CSU continues to urge Congress to take swift, bipartisan legislative action toward a much-needed permanent solution so that our Dreamers can continue to fulfill their human potential and strengthen our campuses, communities, state and nation," White said.

The chancellor added that "some of the CSU’s brightest students and most dedicated employees are Dreamers and they are found on each of our 23 campuses."

“If the Radical Left Democrats assume power, your Second Amendment, Right to Life, Secure Borders, and Religious Liberty, among many other things, are OVER and GONE!,” Trump claimed.

In a subsequent tweet, the President claimed that, “The DACA decision, while a highly political one, and seemingly not based on the law, gives the President of the United States far more power than EVER anticipated.”

“Nevertheless,” he wrote, “I will only act in the best interests of the United States of America!”

President Trump also tweeted that he’ll release a “new list of Conservative Supreme Court Justice nominees, which may include some, or many of those already on the list, by September 1, 2020.”

It’s not clear how the list would be different from the list of potential nominees Trump has already pledged to select from. Trump had a list of conservative judges that he touted during the campaign, and has updated it in the past.

Earlier in the day, the President criticized the court's "horrible & politically charged decisions" in a tweet.

It extended protections to millions of workers nationwide and was a defeat for the Trump administration, which argued that Title VII of the Civil Rights Act that bars discrimination based on sex did not extend to claims of gender identity and sexual orientation.

Attorney generals from across the country have been reacting to the Supreme Court's decision to block President Trump's attempt to end the Deferred Action for Childhood Arrivals (DACA) program.

“Today is a tremendous victory for Dreamers and the rule of law. For years, thousands of young people have been trapped in a terrifying limbo, their hopes and dreams on hold as we fought this case through our legal system. The Trump Administration’s attack on DACA was cruel and completely unnecessary, rooted in bad law and badly bungled procedure. This decision is a stunning legal rebuke of a centerpiece of Trump’s hate-filled and xenophobic immigration policy. This is a moment to celebrate, but our fight continues on behalf of countless other immigrant families still in the shadows, who too deserve a fair chance to achieve their American dream,” Tong said.

According to the statement, in 2017, Connecticut joined 15 other states in a lawsuit "challenging the Trump Administration's arbitrary and unlawful decision to revoke DACA."

“Chief Justice Roberts does it again, convoluting the law to appease the D.C. establishment.”

Jordan also reacted to the decision in a tweet:

“Yet John Roberts again postures as a Solomon who will save our institutions from political controversy and accountability. If the Chief Justice believes his political judgment is so exquisite, I invite him to resign, travel to Iowa, and get elected. I suspect voters will find his strange views no more compelling than do the principled justices on the Court,” Cotton said in the statement.

Remember: A majority of justices — five of them — are considered conservative. Today, Roberts sided with the four more liberal justices.

Former President Barack Obama weighed in on the SCOTUS decision on Twitter Thursday morning, writing of DACA recipients: "Today, I'm happy for them, their families, and all of us."

"We may look different and come from everywhere, but what makes us American are our shared ideals," Obama wrote, noting the program was created eight years ago this week.

The Obama-era initiative protects from deportation nearly 700,000 young undocumented immigrants who came to the United States as children.

Obama called on voters to elect Joe Biden and a Democratic Congress that "protects DREAMers, and finally creates a system that’s truly worthy of this nation of immigrants once and for all."

“Today, justice prevailed for every Dreamer who has worked hard to help build our country — our neighbors, teachers, doctors, and first responders. Today, America told the Dreamers that this is their home,” Becerra said. “The highest court in our land saw through the Trump Administration’s illegal, baseless excuses. The Court agreed: If you work hard and play by the rules, you deserve a chance to get ahead."

Becerra continued: "However, our fight doesn’t end here: Congress can permanently fix our broken immigration system and secure a pathway to citizenship. As a former lawmaker who launched bipartisan immigration talks on Capitol Hill, I know first-hand that bipartisan support can — and must — exist. It will take all of us working together to get it done.”

According to the statement, in November of 2019, the California Department of Justice led a coalition of 21 attorneys general in defense of DACA before the Supreme Court.

“We were in such dread about what could possibly happen at the court up until last night, just if it goes this way or if it goes that way. But this way is the American way,” Pelosi said at her weekly news conference.

Pelosi added that there is large bipartisan support for DACA.