Former special counsel Robert Mueller confirmed today that he did not exonerate President Trump in his investigation.

Nadler: Director Mueller, the President has repeatedly claimed that your report found there was no obstruction and that it completely and totally exonerated him. But that is not what your report said, is it?

Mueller: Correct, that is not what the report said.

Nadler: And from reading from page 2 of volume 2 of your report that's on the screen you wrote, 'If we had confidence after a thorough investigation of the facts that the President clearly did not commit obstruction of justice we would so state. Based on the facts and the applicable legal standards, however, we are unable to reach that judgment.' Now, does that say there was no obstruction?

Nadler: In fact, you are actually unable to conclude the President did not commit obstruction of justice, is that correct?

Mueller: Well, we at the outset determined that we -- when it came to the President's culpability we needed to -- we needed to go forward only after taking into account the OLC opinion that indicated that a president -- a sitting president cannot be indicted.

Nadler: So the report did not conclude that he did not commit obstruction of justice? Is that correct?

Mueller: That is correct.

Nadler: And what about total exoneration? Did you actually totally exonerate the President?

Nadler: Now, in fact your report expressly states it does not exonerate the President?

Special Counsel Robert Mueller said his testimony today will "necessarily be limited." In his opening statement, he outlined two reasons for that:

Mueller said he "will not be able to answer questions about certain areas that I know are of public interest." That includes questions about the opening of the FBI’s Russia investigation and "matters related to the so-called 'Steele Dossier.'"

"These matters are the subject of ongoing review by the Department. Any questions on these topics should therefore be directed to the FBI or the Justice Department," he said.

"I do not intend to summarize or describe the results of our work in a different way in the course of my testimony today. As I said on May 29: the report is my testimony. And I will stay within that text," he said.

Robert Mueller opened his testimony by going over his investigation into Russian interference in the 2016 presidential election.

He said his investigation found that the "Russian government interfered in our election in sweeping and systematic fashion."

"Second, the investigation did not establish that members of the Trump campaign conspired with the Russian government in its election interference activities. We did not address 'collusion,' which is not a legal term. Rather, we focused on whether the evidence was sufficient to charge any member of the campaign with taking part in a criminal conspiracy. It was not.
Third, our investigation of efforts to obstruct the investigation and lie to investigators was of critical importance. Obstruction of justice strikes at the core of the government’s effort to find the truth and to hold wrongdoers accountable."

Lawmakers are expected to grill Mueller for three hours. Each members gets about five minutes to question Mueller.

Collins added: "This hearing is long overdue. We’ve had the truth for months — no American conspired to throw our elections. What we need today is to let that truth bring us confidence and closure." 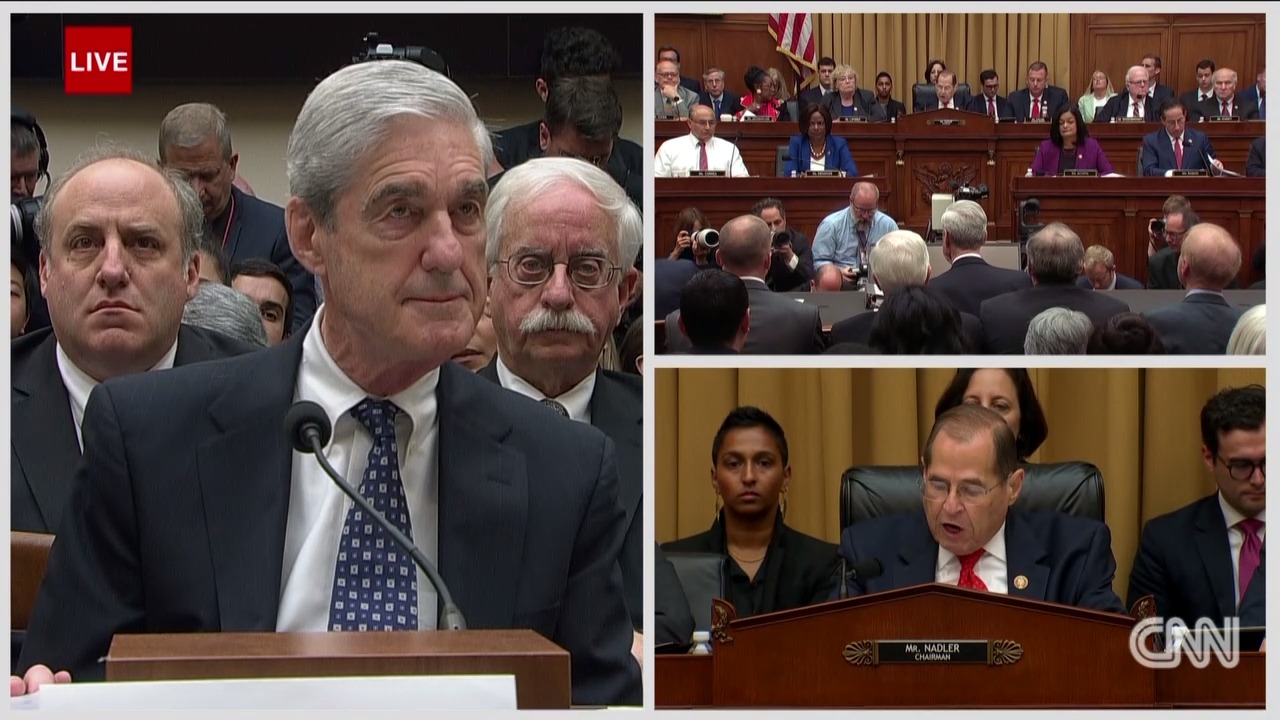 Robert Mueller, who is facing lawmakers right now, is surrounded by people who worked with him on his investigation.

House Judiciary Chair Jerry Nadler said in his opening statement that "any other person" who acted as President Trump has would have been criminally charged.

"The President’s behavior included, and I quote from your report, 'public attacks on the investigation, non-public efforts to control it, and efforts in both public and private to encourage witnesses not to cooperate,'" Nadler said.

"Among the most shocking of these incidents, President Trump ordered his White House counsel to have you fired and then to lie and deny that it ever happened; he ordered his former campaign manager to convince the recused attorney general to step in and limit your work; and he attempted to prevent witnesses from cooperating with your investigation."

"Although Department policy barred you from indicting the President for this conduct, you made clear that he is not exonerated. Any other person who acted this way would have been charged with a crime. And in this nation, not even the President is above the law.

Some background: Mueller's 448-page report, which was released in April, detailed numerous cases in which Trump asked his aides to take actions that would have obstructed the investigation, but stated they were unsuccessful because the aides refused his orders. Mueller's investigation pointedly states it was unable to conclude "no criminal conduct occurred."

The hearing is opening with remarks from the committee's chairman Rep. Jerry Nadler.

As with past high-profile events, the security team has scripted every moment of what we’re about to see, from his arrival to departure.

The room will be controlled by Capitol Police and Mueller’s immediate close-in security is in the hands of the FBI.