Robert Mueller is trying to be careful and keeping his answers as close to the report as possible, according to two sources who are close to him.

Some of the questioners are using rapid-fire or long-winded questions to try to have him depart from the report’s language.

Republicans in particular have used their time to try to impeach the witness.

The Mueller style to try to keep it dry and not provide fodder for the ongoing political fights doesn’t do well in this kind of hearing.

A congressional source involved in negotiations surrounding Mueller’s appearance says that Mueller’s team told the committees that he would decline to read from his report during the hearing.

During his questioning of Robert Mueller, Rep. Hakeem Jeffries, a Democrat from New York, outlined why he believed the President had committed obstruction of justice:

"The investigation found substantial evidence that when the President ordered Don McGahn to fire the special counsel and then lie about it, Donald Trump, one, committed an obstructive act. Two, connected to the initial proceeding. Three, did so with corrupt intent. Those are the elements of obstruction of justice," he said.

Jeffries added: "This is the United States of America. No one is above the law. No one. The President must be held accountable one way or the other."

Mueller responded that he was "not supportive" of Jeffries' analysis, but said it's not "out of the ballpark."

"Let me just say, if I might, I don't subscribe necessarily to your -- to the way you analyze that. I’m not saying it’s out of the ballpark, but I'm not supportive of that analytical charge."

Before he began taking questions, former Special Counsel Robert Mueller said that his testimony would "be limited" and he promised to stick to the text of his report.

He seems to be sticking to that promise.

Mueller so far has told members of Congress to refer to the report in answering questions at least 28 times.

He has also deflected or declined to answer at least three additional times, saying he would have to check on that or look more closely at the statute.

We just returned from a five-minute break. But Robert Mueller's testimony before the House Judiciary Committee is not over just yet.

He has about another hour and a half left.

After Mueller wraps up his testimony, the House Intelligence Committee will question him at noon.

Robert Mueller declined to engage with the Republican lawmaker who launched one of the most personal attacks at the special counsel at the hearing so far:

"And if somebody knows they did not conspire with anybody from Russia to affect the election and they see the big justice department with people that hate that person coming after him and then a special counsel appointed who hires a dozen or more people that hate that person and he knows he's innocent, he's not corruptly acting in order to see that justice is done. What he's doing is not obstructing justice. He is pursuing justice. And the fact that you ran it out (GAVEL) ... two years means you perpetuated injustice."

After Rep. Louie Gohmert, a Texas Republican accusing Mueller of having “perpetuated injustice” by running his investigation for two years, Chairman Jerry Nadler gave Mueller a chance to respond.

“I take your question,” he said, instead just moving onto the next lawmaker.

Former Special Counsel Robert Mueller said that when he talked to the President on the FBI Director decision, he was not himself a candidate.

Rep. Louie Gohmert asked Mueller this today: "When you talked to President Trump the day before you were appointed as special counsel, you were talking to him about the FBI Director position, again, did he mention James Comey?"

"Not as a candidate," Mueller said.

Some context: Republicans and Trump have spent months claiming it’s a conflict for Mueller to have interviewed for the FBI job and then become special counsel. Trump has said that he rejected Mueller for the job.

Trump even tweeted this this morning:

CNN has been told that Mueller came in to provide advice on choosing an FBI director.

“Why did the President of the United States want you fired?” Deutch asked.

Deutch went on to say that Mueller found evidence that the President wanted to fire him because he was investigating Trump for obstruction of justice.

"That's what it says in the report. And yes I standby the report," Mueller said. 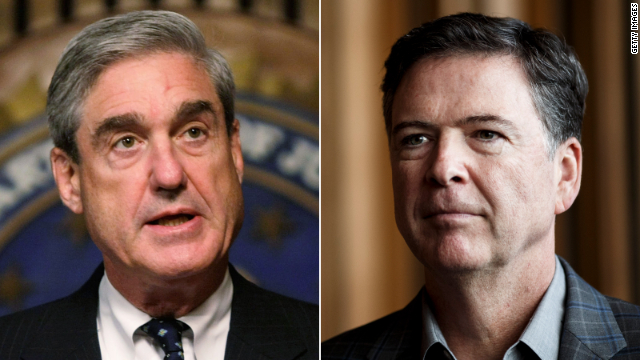 Mueller admitting only that they were “friends” and “business associates.”

“We both started off at the Justice Department about the same time,” Mueller said.

Mueller said he had not spoken with Comey in the six months before he was appointed special counsel in 2017.

There are multiple screens in the room today.

One is in front of special counsel Robert Mueller, and it is showing quotes from his report.

There is also a larger screen behind Mueller, which is also displaying lines from the Mueller report.