We're wrapping up our live coverage of his testimony.

In case you missed it, here are the key takeaways from his second hearing:

"The very next step either tomorrow or Friday is we're going into court to ask for the grand jury material and to enforce the subpoena against Mr. McGahn. And that's particularly important because the excuses — I won't call them reasons — the excuses the White House gives for McGahn not testifying and the nonsense about absolute immunity etc. are the same excuses for all the other fact witnesses, and if we break that, we break the law," Nadler said.

Some background: In May, the White House instructed former McGahn not to comply with a subpoena for documents Nadler, teeing up the latest in a series of escalating oversight showdowns between the Trump administration and congressional Democrats.

McGahn's decision not to comply with the subpoena could push Nadler to hold McGahn in contempt of Congress, just as he's moving to do with Attorney General William Barr after the Justice Department defied a subpoena for the unredacted Mueller report and underlying evidence. 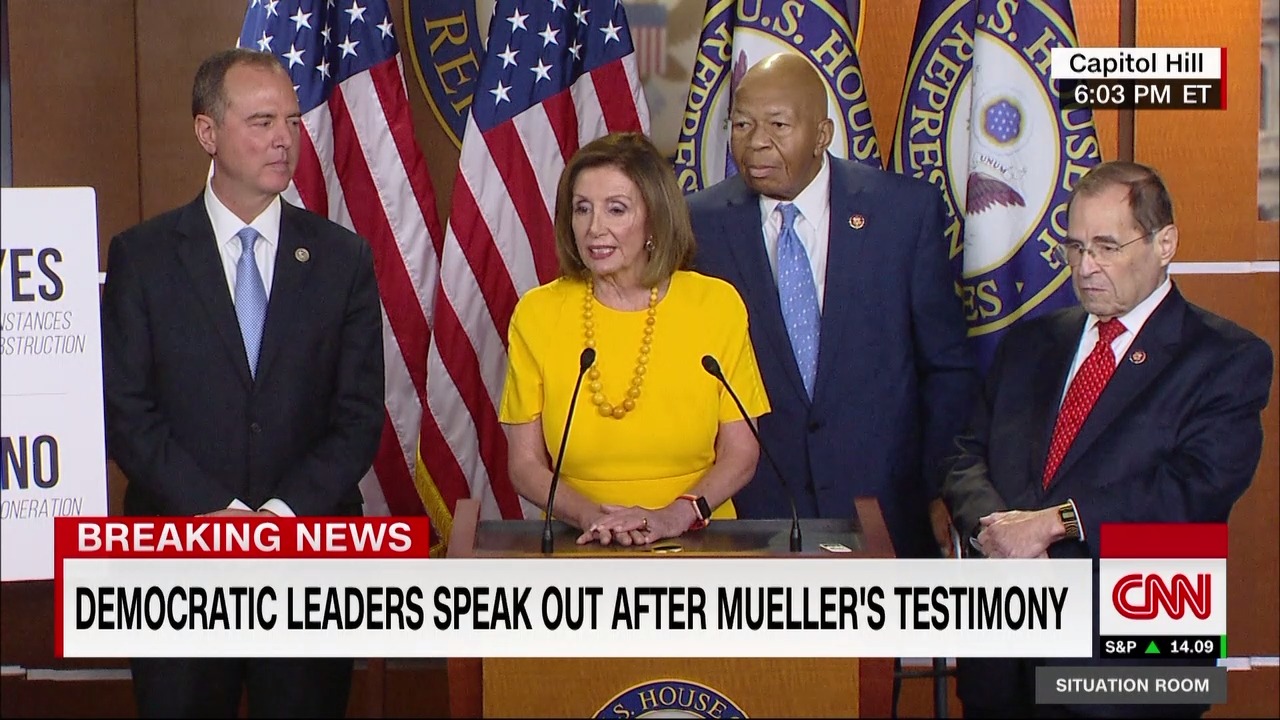 Asked if the House should launch impeachment proceedings, House Speaker Nancy Pelosi avoided answering the question directly, saying they still have some things to sort out.

"My position has always been whatever decision we made in that regard would have to be done with our strongest possible hand, and we still have some outstanding matters in the courts. It's about the Congress, the Constitution and the courts. And we are fighting the President in the courts," she said. 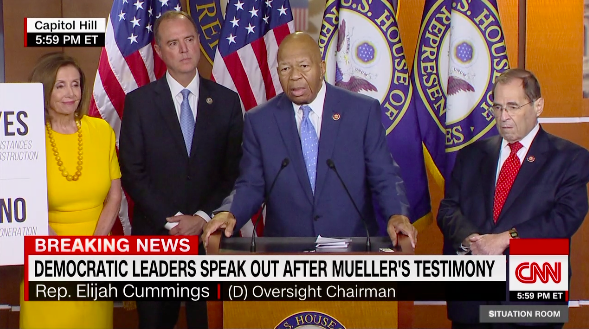 Democratic Rep. Elijah Cummings, chair of the Government Reform and Oversight Committee, said at the press conference that, “This is a critical moment in our country's history."

"Don't be fooled. And it is a moment which people will be talking about and reading about three, four hundred, five hundred years from now. And they're going to ask the question, what did you do when we had a president who knew the rules and knew that our founding fathers had done a great job of creating a constitution and had put in all the guardrails but never anticipate that we would have a president that would just throw away the guardrails.”

Cummings called today's hearings a "giant step in making sure that the American people got a picture of all this and, hopefully, will look towards the future and say we’re not going to have this."

"I’m begging the American people to pay attention to what is going on," he said. 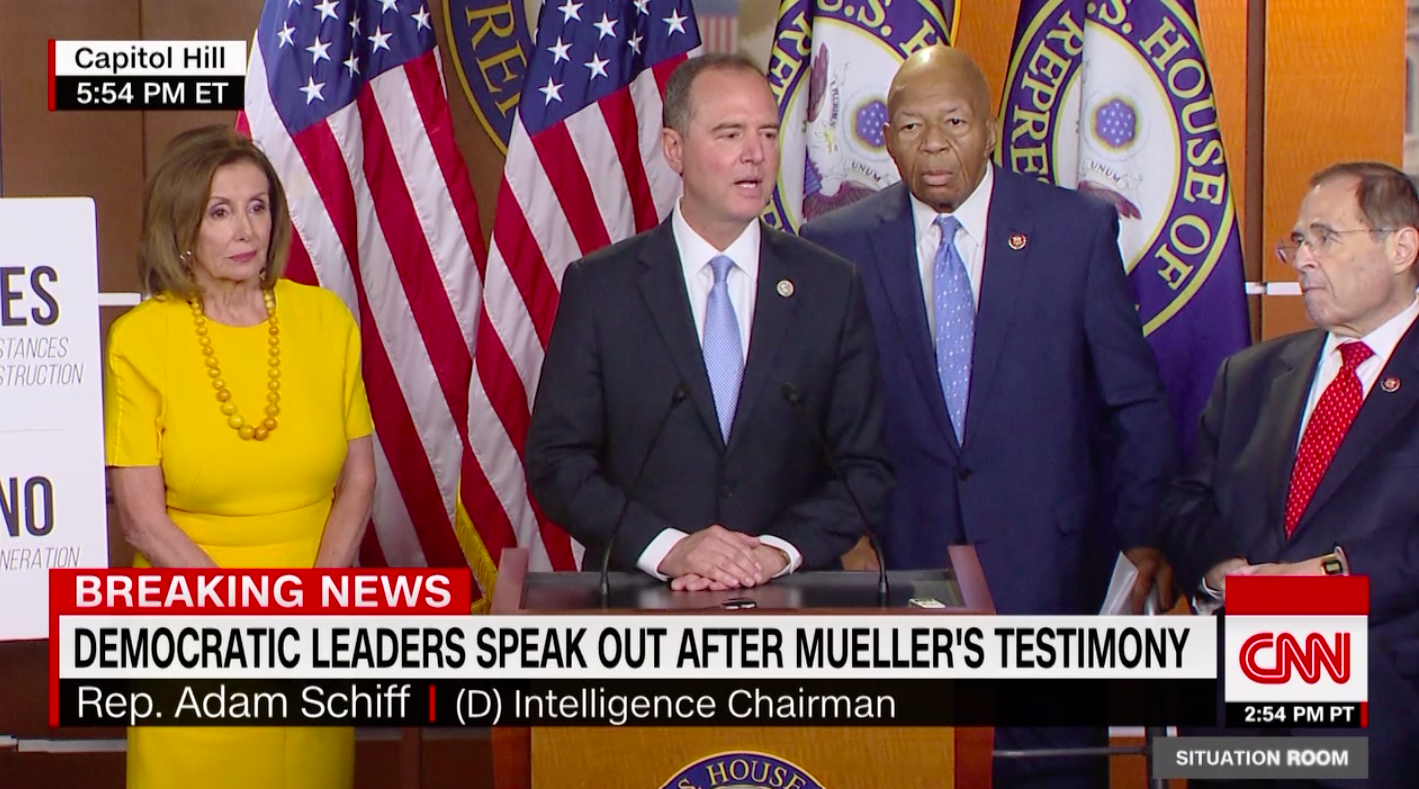 Rep. Adam Schiff said the US needs to "harden" its "election defenses" going into the 2020 election.

"And so we go into this next election more vulnerable than we should be," Schiff said. "We can't control completely what Russia does, although we must do everything we can to harden our election defenses to make sure there are paper trails, to make sure that we deter and disrupt any kind of Russian intervention, but we cannot control that completely, but we can control what we do."

During his testimony, Mueller said the Russians expect to meddle in the 2020 election.

"It wasn't a single attempt. They're doing it as we sit here. And they expect to do it during the next campaign," Mueller said. 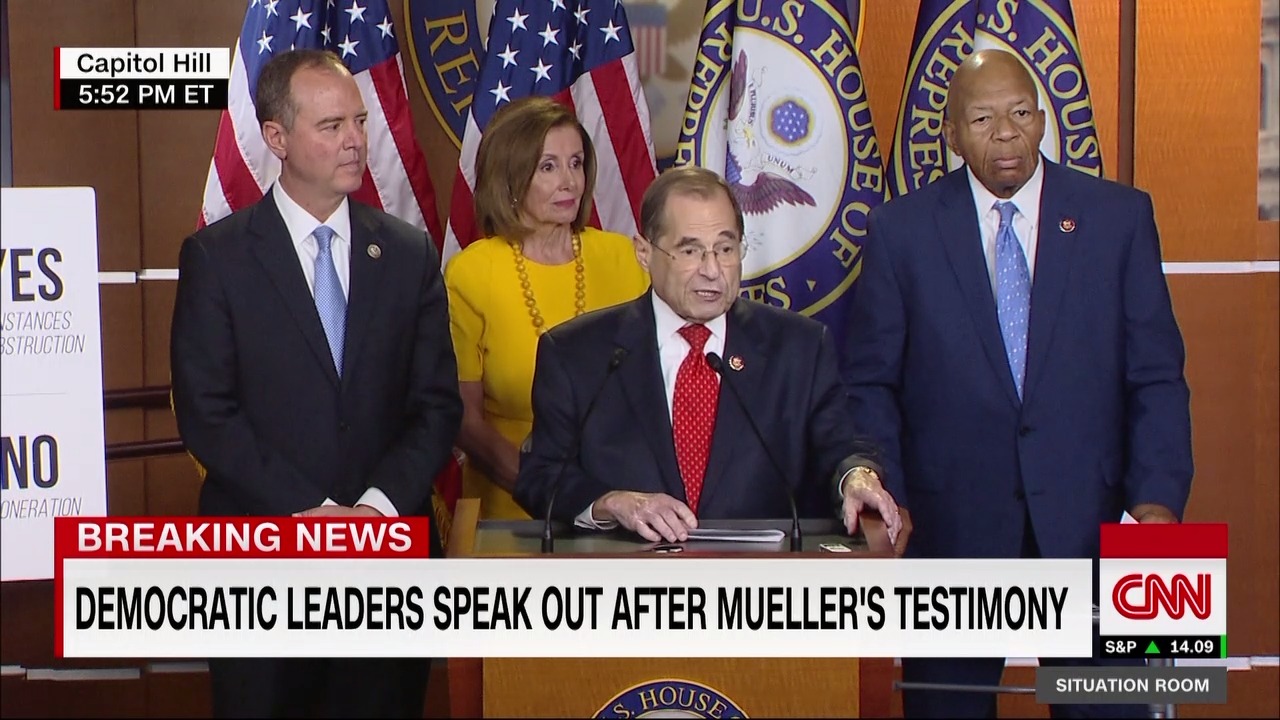 Rep. Jerry Nadler, the chairman of the House Judiciary Committee, laid out key lines from Robert Mueller's testimony this evening.

"Mueller made clear that the President is not exonerated," he said.

“I don’t know whose answers weren’t — I guess his (Mueller’s) answers weren’t, because if you look, the whole report, you take a look at what they did. Some of the things that didn’t even know about, some of the things he didn’t even know what was going on. But you know, in the end what he did, he actually probably came through for himself,” Trump said.

He went on to criticize Mueller’s performance.

“The performance was obviously not very good. He had a lot of problems, but what he showed more than anything else is that this whole thing has been three years of embarrassment and waste of time for our country. And you know what, the Democrats thought they could win an election like this. I think they hurt themselves very badly for 2020,” Trump said.

Asked if Trump’s son, Donald Trump Jr., spoke with Mueller, Trump said he did not know.

“I don’t know. I really don’t know — I don’t know — I mean frankly, whether or not he did it wouldn’t matter to me because he did nothing wrong,” Trump said, calling his son’s June 2016 meeting with Russians “a very unimportant meeting.”

President Trump said that he has no regrets about refusing to sit down for an interview with former special counsel Robert Mueller during his investigation.

"No, I did the right thing," he told reporters today, pointing to the number of individuals who were charged with lying to federal investigators.

Trump falsely diminished the lies that witnesses who were charged with lying told to investigators, suggesting that simply mischaracterizing "a date" or the weather could lead to federal charges.

"I saw what he did to people, how he ruined people's lives because they didn't remember a date or something very minor. He ruined people's lives," Trump said of Mueller. "So when you ask me that question, all they have to do is see how nice this weather is. If I made a mistake and I said I was talking to the media and it was a little bit rainy, a little bit overcast, they'd say well we have to do — he lied."

"I've seen how they've destroyed people like Gen. Flynn and so many others, what they've done to people," Trump said. "No, I did the right thing."

President Trump said he knew the investigation into his campaign's ties with Russia was a "hoax."

"Absolutely, it was not a hoax. The indictments we returned against the Russians, two different ones, were substantial in their scope using the scope word again. And I think one of the -- we have underplayed to a certain," Mueller said.

Trump also told reporters that he appreciated Republicans and "those incredible warriors" who were "defending our country."