"When a leader tells you something, you’ve got to be able to count on it. That’s President Trump. He says what he means, he means what he says, and he’s done what he said he would do at every single turn," Holtz said.

He went on to say that "Trump always finds a way to get something done."

"If you want to do something bad enough, you will find a way. If not, you will find an excuse, and excuses are a lot easier to find than solutions. President Trump finds solution," Holtz said.

"President Trump is committed," he said.

Michael McHale, the president of the National Association of Police Organizations, praised President Trump tonight during the Republican National Convention, calling him someone who shown support "for the men and women on the front lines, particularly during these challenging times."

McHale, who served for 27-years with the Sarasota, Florida, Police Department, claimed the lack of support for law enforcement in cities like Portland and Minneapolis is why "shootings, murders, looting and rioting occur unabated," he said tonight.

"The violence and bloodshed we are seeing in these and other cities isn’t happening by chance; it’s the direct result of refusing to allow law enforcement to protect our communities," McHale said.

The early portion of the third night of the RNC was a microcosm of how President Donald Trump's campaign has sought to ignore or move past the crises gripping the nation.

There were no mentions of the police killing of Jacob Blake or the vigilante who killed two people in Wisconsin last night. Little acknowledgment of the coronavirus pandemic that has left 180,000 Americans dead. Barely anything about Hurricane Laura, which is bearing down on the Gulf Coast, hours from making landfall.

Instead, Republicans stayed focused on Trump -- often inflating or misstating his record, while touting his support for the military, backing of religious freedom and efforts to crack down on protesters in major cities.

In a vacuum, it set the stage for some moving speeches. But in the context of fast-moving developments on health, climate and racial crises, it felt disconnected from reality.

It was all intentional: The Trump campaign's efforts to close the polling gap with Democratic presidential nominee Joe Biden could depend on the President's ability to redirect Americans' focus. Polls have shown voters trust Biden more on matters of health care and racial justice, forcing Trump and the RNC to try to shift the landscape on which the 2020 campaign is being waged in short order.

Second lady Karen Pence’s Republican National Convention remarks largely eschewed politics, sticking closely to the evening’s theme of “Land of Heroes” by honoring the 100th anniversary of the adoption of the 19th Amendment, military spouses, veterans, and first responders with compelling anecdotes from those she’s met in her role.

Pence has made art therapy her platform and worked to raise awareness for the practice as a mental health profession and treatment option. She share the story of a Marine veteran dealing with post-traumatic stress disorder through art therapy.

A mom of a Marine and mother-in-law to a Naval Lieutenant, Pence also, like her predecessor Jill Biden, has worked with military spouses. On Wednesday, she called those spouses “home front heroes.”

“Military spouses may experience frequent moves and job changes, periods of being a single parent while their loved one is deployed—all while exhibiting pride, strength, and determination and being a part of something bigger than themselves,” she said, thanking them.

Pence is, arguably, the vice president’s closest and most trusted adviser. Early this year, Pence was tapped to lead PREVENTS, the administration’s interagency task force on mental health and suicide prevention.

She described a recent meeting with Americans who answer the Veterans Crisis Line.

“One in particular, Sidney Morgan, especially impacted me. A veteran herself, Sidney said it is the highest honor of her life to be on the other end of the phone to hold a veteran’s hand every step of the way until they physically walk into a clinic to receive help they deserve and she can pass their hand to someone ready to help,” she said.

Like first lady Melania Trump, Pence acknowledged the challenges of the coronavirus pandemic in her six-minute remarks. As a part-time art teacher at a private school, Pence is returning to the classroom in the coming weeks, her husband noted in an interview last week. The Northern Virginia school is resuming full-time, in-person instruction amid the administration’s push to reopen schools.

“In these difficult times, we’ve all seen so many examples of everyday Americans reaching out a hand to those in need,” she said, calling healthcare workers, teachers, first responders, mental health providers, law enforcement officers, grocery and delivery workers, and farmers “heroes all.”

White House press secretary Kayleigh McEnany shared her personal story at the Republican convention of undergoing a preventative mastectomy as a testament to how President Donald Trump cares about preexisting conditions.

“On May 1, 2018, I followed in my mother’s footsteps, choosing to get a preventative mastectomy. I was scared. The night before I fought back tears, as I prepared to lose a piece of myself forever,” McEnany said. "But the next day, with my mom, dad, husband, and Jesus Christ by my side, I underwent a mastectomy, almost eliminating my chance of breast cancer— a decision I now celebrate.”

McEnany said that as she came out of anesthesia, “one of the first calls I received was from Ivanka Trump.”

Later, it was a call from President Trump.

“I was blown away. Here was the leader of the free world caring about my circumstance,” she said, adding that at the time she’d only spoken to Trump on a few occasions.

“But now I know him well, and I can tell you that this president stands with Americans with preexisting conditions,” she continued.

“The same way President Trump has supported me, he supports you, she added. “I see it every day.”

Later, McEnany spoke about her nine month old baby, who she called a “miracle.”

“I want my daughter to grow up in President Donald J. Trump’s America,” McEnany said. "Choosing to have a preventative mastectomy was the hardest decision I ever had to make. But supporting President Trump, who will protect my daughter and our children’s future, was the easiest." 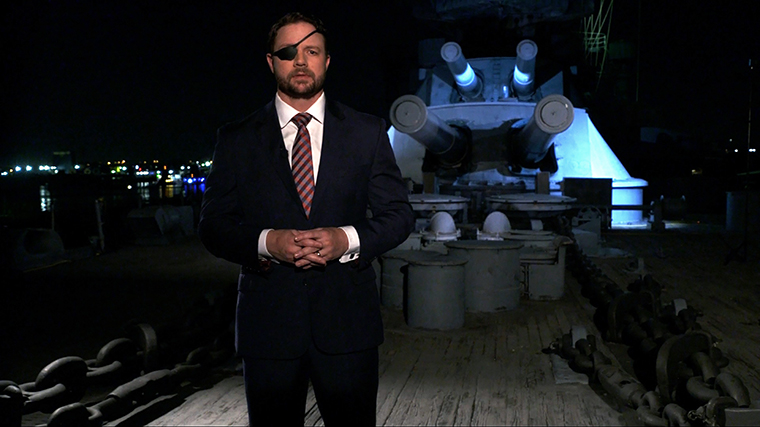 Rep. Dan Crenshaw spoke on the third night of the Republican National Convention Wednesday and the Texas congressman opened with a story of sacrifice witnessed during his active duty in Afghanistan.

“Eight years ago, in the fields of Helmand Province, Afghanistan, a close of friend and teammate laid down cover fire against Taliban insurgents so that I could walk – blind and bloodied – to the Medevac helicopter and survive,” Crenshaw said. “But he didn’t. Dave was killed two months later. He died a hero to this great country. Here’s the truth about America: we are a country of heroes. I believe that, so should you.”

Crenshaw also spoke of the heroism he sees in everyday Americans in spite of the challenges posed by the coronavirus pandemic and civic unrest.

“It’s the nurse who volunteers for back to back shifts caring for Covid patients because she feels that’s her duty. It’s the parent who will re-learn algebra because there’s no way they’re letting their kid fall behind while schools are closed. It’s the cop that gets spit on one day and will save a child’s life the next,” Crenshaw said.

Crenshaw closed his remarks with a suggestion that the opposing side in many of the debates and protests currently gripping this country are less than heroic.

“Heroism is self-sacrifice, not moralizing and lecturing over others when they disagree. Heroism is grace, not perpetual outrage. Heroism is rebuilding our communities, not destroying them. Heroism is renewing faith in the symbols that unite us, not tearing them down," he said.

The White House pool has been called to gather for a presidential movement.

He may come off like a bully when insults women's looks or — as he did with the Democratic running mate — call them crazed, but a roster of female White House advisers hoped to convey a different side of President Donald Trump on Wednesday.

Kayleigh McEnany, his fourth press secretary, recounted Trump's support when she became a new mom. Kellyanne Conway, the outgoing presidential counselor who also spoke Wednesday, has said her recent decision to leave the White House to focus on her family was made with Trump's full backing.

It's a side of Trump many of his aides have long insisted is there in private: the man who cares for his employees, gives women a boost in the workplace and generally is aware of the challenges they confront.

But it's one that is rarely evident in public. Recently, Trump has taken to addressing American "housewives" in tweets, a dated term that doesn't capture in full the scope of the female electorate — including the working women who are boosting him on Wednesday.

Trump's political advisers have watched with increasing concern as polls showed his support among women — and specifically White women — sliding. Trump has scrambled to make amends, including targeting women in his efforts to roll back anti-segregation rules.

But the President's aides have said privately he must do more. Women voters have rated him poorly on his handling of coronavirus and give him poor marks for his divisive behavior and rhetoric.

As the upper Midwest remains under duress following the police shooting of Jacob Blake, a Black man, in Kenosha, Wisconsin. Sen. Marsha Blackburn, a Republican from Tennessee, discussed the importance of law enforcement in the US, calling them "heroes."

"I want to talk to you about another kind of hero. The kind Democrats don’t recognize, because they don’t fit into their narrative. I’m talking about the heroes of our law enforcement and armed services," Blackburn said tonight during the Republican National Convention. "Leftists try to turn them into villains. They try to cancel them. But I’m here to tell you that these heroes can’t be cancelled."

Blackburn's perspective was inspired by her father, who served in the Army during WWII and who volunteered with the sheriff's department for 30 years after returning home, she said.

More on Wisconsin: A 17-year-old Illinois resident connected to an overnight shooting during a protest in Kenosha was taken into custody Wednesday morning, according to police in Antioch, Illinois.

Wisconsin authorities issued an arrest warrant charging Kyle Rittenhouse with first-degree intentional homicide, Antioch Police said. He is in the custody of the Lake County Judicial System pending an extradition hearing to transfer him from Illinois to Wisconsin. Antioch is located about 15 to 20 miles from Kenosha, just across the state border.

Kenosha Police Chief Daniel Miskinis confirmed that a 17-year-old Antioch resident has been charged in a shooting incident and said that the man "was involved in the use of firearms to resolve whatever conflict was in place."