The debate about slavery reparations

New Jersey Democratic Sen. Cory Booker, writer Ta-Nehisi Coates and actor Danny Glover testified before the House panel as it considered legislation that would establish a commission to study the consequences and impacts of slavery and make recommendations for reparations proposals.

Today marked another important event: The hearing fell on Juneteenth, also called Emancipation Day, which celebrates the end of slavery.

Here's what you need to know about the day: 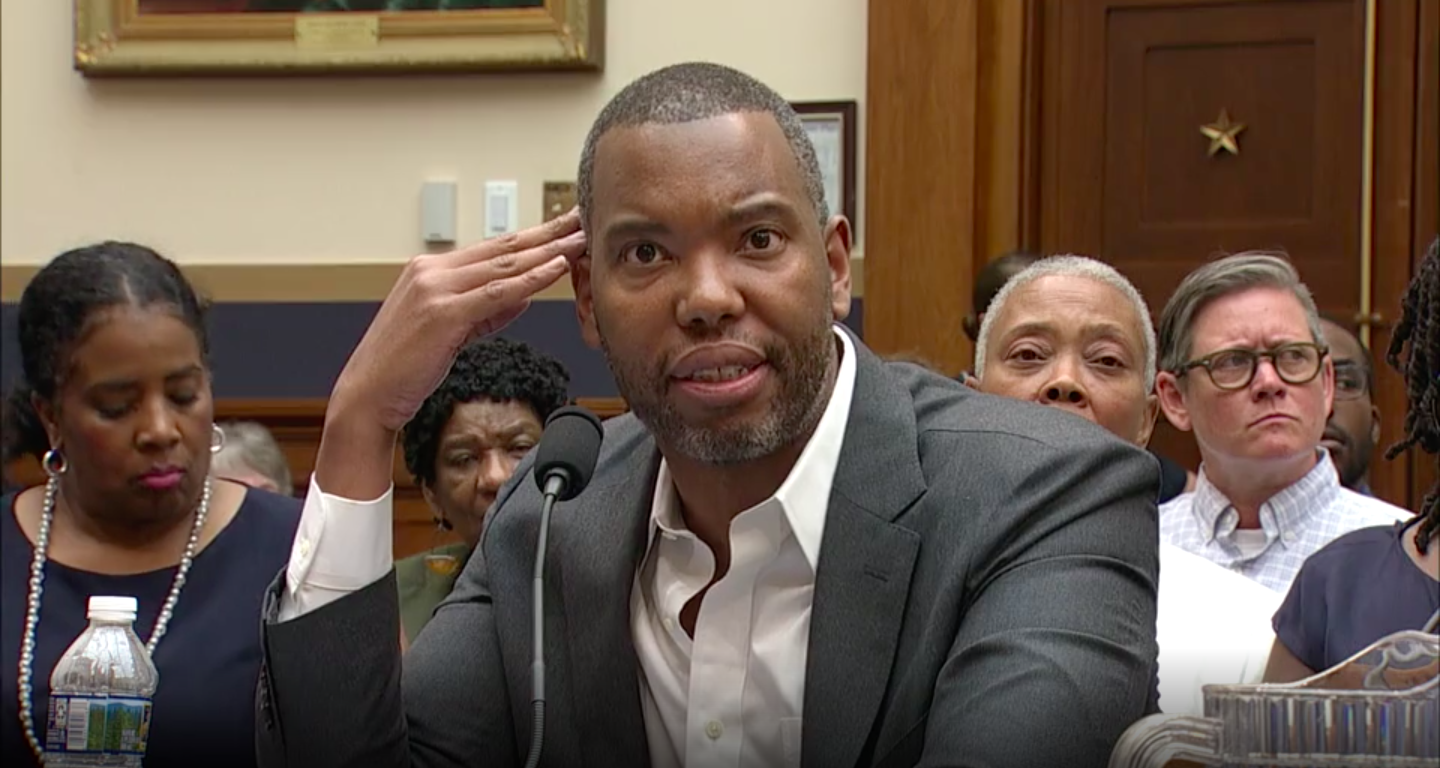 Writer Ta-Nehisi Coates said a committee to recommend possible reparations for slavery is needed to "study exactly what the damage was and what potential remedy might be offered."

"I don't think we should rule out cutting checks. There are people who deserve checks," Coates said during his testimony in front of a House panel considering legislation about reparations Wednesday.

Coates put a spotlight on the subject with his 2014 piece in The Atlantic titled "The Case for Reparations."

His remarks come after some lawmakers like Mitch McConnell have pushed back against the idea of reparations, saying it would be hard to determine who to pay. 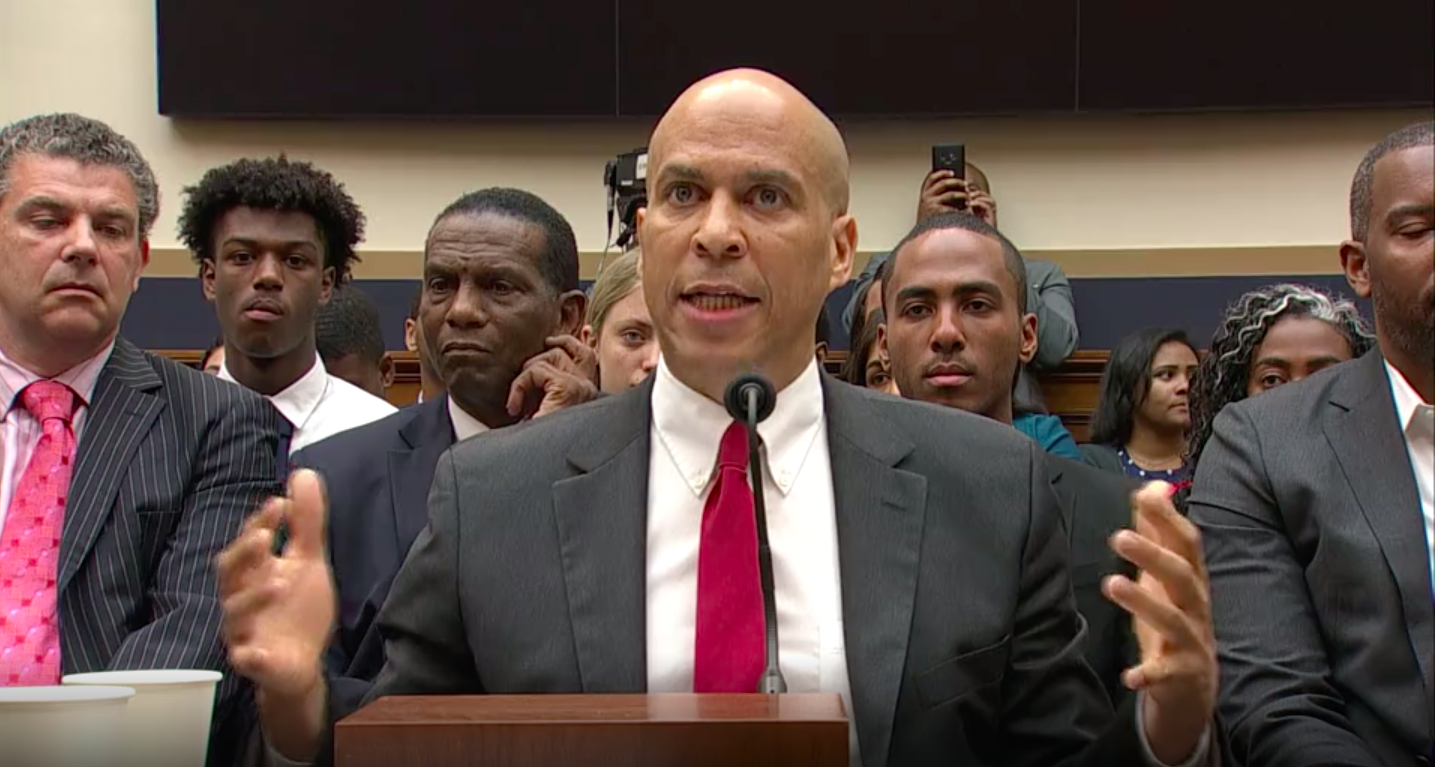 New Jersey Democratic Sen. Cory Booker testified before a House panel during a hearing on reparations for slavery Wednesday, bringing a political issue from the campaign trail to the front and center on Capitol Hill.

Booker, the first witness to speak, talked about his experiences in low-income, black neighborhoods and the injustices he saw.

Booker also told the panel that America has not yet grappled with racism and white supremacy and that the hearing presents a "historic opportunity to break the silence, to speak to the ugly past and talking constructively about how we will move this nation forward."

How do you put a cash value on hundreds of years of forced servitude?

Academics, lawyers and activists have taken a shot at calculating the cost, and their results vary. Most formulations have produced numbers from as low as $17 billion to as high as almost $5 trillion.

The most often-quoted figure, though, is truly staggering, as anthropologist and author Jason Hickel notes in his 2018 book, "The Divide: Global Inequality from Conquest to Free Markets":

"It is estimated that the United States alone benefited from a total of 222,505,049 hours of forced labor between 1619 and the abolition of slavery in 1865. Valued at the US minimum wage, with a modest rate of interest, that is worth $97 trillion today."

Keep in mind, the total US federal budget for fiscal year 2018 was $4.1 trillion.

Where would the money come from? Generally, advocates for reparations say that three different groups should pay for them: governments, private companies and rich families that owe a good portion of their wealth to slavery.

You can read more about the issue here.

We're talking a lot about reparations, or compensating the descendants of American slaves.

Opponents of reparations argue that all the slaves are dead, no white person living today owned slaves or that all the immigrants that have come to America since the Civil War don't have anything to do with slavery. Also, not all black people living in America today are descendants of slaves (like former President Barack Obama).

Others point out that slavery makes it almost impossible for most African-Americans to trace their lineage earlier than the Civil War, so how could they prove they descended from enslaved people?

Writer David Frum noted those and other potential obstacles in a 2014 piece for The Atlantic entitled "The Impossibility of Reparations," which was a counterpoint to Coates' essay. Frum warned that any reparations program would eventually be expanded to other groups, like Native Americans, and he feared that reparations could create their own brand of inequality.

"Within the target population, will all receive the same? Same per person, or same per family? Or will there be adjustment for need? How will need be measured?" asks Frum, a former speechwriter for President George W. Bush. "And if reparations were somehow delivered communally and collectively, disparities of wealth and power and political influence within black America will become even more urgent. Simply put, when government spends money on complex programs, the people who provide the service usually end up with much more sway over the spending than the spending's intended beneficiaries."

Read more about reparations — and the arguments for and against them — here. 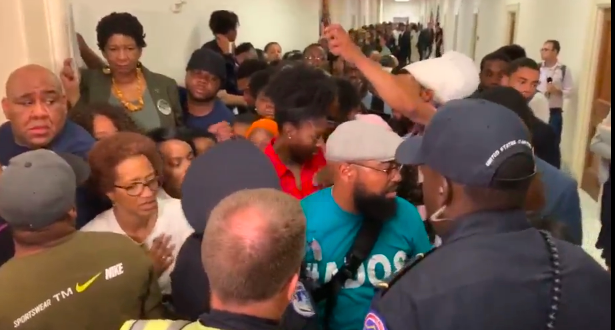 Many people showed up at 7 a.m. to get inside the room for the hearing.

After the hearing room reached maximum capacity, many people were left waiting in the hallway waiting to get in.

Capitol Hill police officers were trying to organize the massive crowds waiting to get inside the reparations hearing in the House. 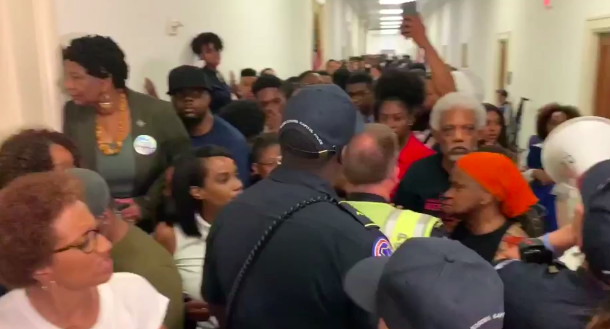 The idea of reparations for slavery mostly existed outside the mainstream political debate in the past. But in the last few months, democratic candidates for president have been pushing it to the forefront of conversation.

Here's what some candidates have said about reparations so far:

Other contenders who said they support H.R. 40, a piece of legislation that would establish a commission to study the issue, include Pete Buttigieg, John Delaney, Kirsten Gillibrand, Amy Klobuchar, Beto O'Rourke, and Tim Ryan.

Bernie Sanders has said he believes the country must address racial disparities, but questions exactly what "reparations" would look like.

Compensating the descendants of American slaves is suddenly a hot topic on the campaign trail, with presidential candidates voicing support for slavery reparations.

Some history: The idea of giving black people reparations for slavery dates back to right after the end of the Civil War. For decades it's mostly been an idea debated outside the mainstream of American political thought.

Why we talking about this now: Writer Ta-Nehisi Coates reintroduced it to the mainstream with a piece, "The Case for Reparations," in 2014 in The Atlantic. And now several Democratic presidential candidates, who need the votes and energy of liberal voters to succeed in the primaries, have said they support some form of reparations for slavery.

So, what are the prospects of reparations moving forward? Despite the words of support from these Democratic presidential candidates, slavery reparations still face an uphill battle.

The idea isn't popular with the American public. A 2016 Marist poll found that 68% of Americans don't think the US should pay reparations to the descendants of slaves. Unsurprisingly there's a racial divide to this. Some 81% of white Americans are against reparations, while 58% of African Americans support them. What is surprising is the generational divide the poll revealed. Millennials surveyed were much more likely than Baby Boomers or Gen-Xers to support reparations. Even still, a total of 49% of millennials opposed them.

Senate Majority Leader Mitch McConnell said he opposes paying reparations for slavery Tuesday — a day before the House Judiciary Committee's subcommittee on the Constitution, Civil Rights, and Civil Liberties is set to hold a hearing on legislation related to the issue.

"I don't think reparations for something that happened 150 years ago for whom none of us currently living are responsible is a good idea," the Kentucky Republican told reporters in response to a question about whether reparations should be paid or a public apology should be made by Congress or the President.

"We've tried to deal with our original sin of slavery by fighting a civil war, by passing landmark civil rights legislation. We elected an African American president," he said.

He also argued it would be difficult to figure out who would receive the compensation because of the "waves of immigrants" who have faced "dramatic discrimination" in the country.

Listen to his full statement: