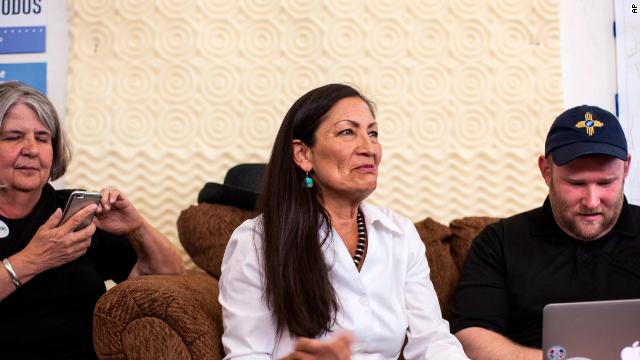 The former Democratic state party leader, an enrolled member of the Pueblo of Laguna, is seeking to replace Rep. Michelle Lujan Grisham, who is leaving her post representing the solidly Democratic district to run for governor. Haaland outlasted a strong field that included former US Attorney Damon Martinez and Antoinette Sedillo Lopez, an activist and former law professor.

"Tonight, New Mexico made history," Haaland said in a speech Tuesday, calling hers a "victory for working people, a victory for women and a victory for everyone who has been sidelined by the billionaire class."

There are 23 tribes in New Mexico, according to the state's Indian Affairs Department, and Native Americans make up a little more than 10% of the total population.

All eyes last night were on California’s “jungle primary,” where the two-top finishes, regardless of party, move onto the general election.

But it's not all decided this morning: Democratic hopes of wresting control of the House of Representatives were hanging in the balance early Wednesday morning, as many votes remained uncounted in California's most competitive congressional races.

It may, in fact, be days, if not more than a week, before all the votes are tallied in three of the mostly closely watched races in the country: California-39, California-48 and California-49.

Here's what we know now:

And here's what we're still watching:

Henry Winkler, known for playing Arthur "Fonzie" Fonzarelli in "Happy Days," tweeted last night that he was one of the many California voters left off the voter rolls in L.A. County tonight.

The error — which was a random printing error — caused widespread confusion in the midst of voting in the California primary on Tuesday. The Los Angeles County Registrar-Recorder said that the names of 118,522 voters were omitted from the roster

The error could have a major impact on the timing of the results in the state, with an increase in provisional ballots possibly delaying the count for days.

Following a trend that's been clear throughout 2018's primaries, Tuesday was another big night for female candidates, some of whom took steps toward breaking their states' gender barriers.

And in New Mexico, Democrat Deb Haaland's win puts her on track to become the nation's first Native American congresswoman.

Progressive women dominated a slate of Democratic primaries on May 22, winning races in Kentucky and Texas and giving Georgia the first black woman to ever be nominated for governor by a major political party.

But all eyes were on California’s “jungle primary,” where the two-top finishes, regardless of party, move onto the general election.

By Wednesday morning, however, many votes remained uncounted in California's most competitive congressional races.

In an interview Tuesday, d'Alessandro credited Sanders for paving the way for his campaign, which he said wouldn't have been possible -- or lasted as long in what had been a deep and well-funded field -- without the "political revolution" they launched two years ago.

"Someone like me couldn't even be in the race," he said.

"The fact that so many people like me are in these races throughout this country is actually the story. We're gonna win some, we're gonna lose some, but the story isn't necessarily about the win-loss score."

"You're the one that's making our communities less safe," he said, adding that he will get rid of the "sanctuary state" law if he is elected.

Cox promised to grow the economy and cut the cost of living in California. He also vowed to "deliver results that matter with quality, efficiency and integrity."

He said the governor's race this November will be serious, substantive and "importantly, it's going to be civil."

CNN projects Republican Congressman Tom McClintock and one Democratic candidate will advance to the general election in California's fourth Congressional race. It is not yet clear which Democrat.

CNN projects GOP Congressman Dana Rohrabacher will advance to the general election in California's 48th District. The second candidate has not yet been determined.

In the California 38th Congressional District, CNN projects that Republican Young Kim will also move through to the general election in November. Kim is looking to replace retiring Congressman Ed Royce. It is not known who the second top finisher will be yet.

And in the race to replace GOP Congressman Darrell Issa in California's 49th District, CNN can project Democrats will not be shut out of the fall race, with at least one Democratic candidate advancing to the general election.