In Oak Park, a liberal bastion just west of Chicago, several voters who were part of a slow trickle — about a dozen voters over 45 minutes mid-morning — into the polling place at the Nineteenth Century Charitable Association said they had backed Collins, a community organizer, because they wanted to see a generational change within the party.

Edward Solan, a 75-year-old retiree, said he voted for Collins because Davis “has been around too long, and it’s time for a change.”

He said the reality that the House Democratic leadership — Speaker Nancy Pelosi, Majority Leader Steny Hoyer and Majority Whip Jim Clyburn — are all over 80 years old was a “contributing factor” in his vote.

“Danny Davis is older than I am. I knew when it was time to retire, and I think it’s time he does,” Solan said. “Not that I have any great disagreement with his record, but it’s time to move on.”

Ray Gobis, a 60-year-old electrician, also said he voted for Collins, and that “part of it is age.”

“It’s time to retire,” he said of Davis. “It’s not that I’m crazy about any other candidate. It’s just that some people maybe stick around a little too long.”

“When you get older, you lose your energy,” Gobis said. “I think some people that are elderly may have a lot of energy. But I don’t see Danny Davis going out and being in the limelight, or bringing up subjects and being in front of the camera. We just don’t see him. I think part of it is just he’s elderly, he’s collecting a nice paycheck.”

But some voters said they saw Davis’ years in Washington as an asset.

Carol DiMatteo, a 79-year-old retiree, said she backed Davis because of his seniority in Congress. He was first elected to the House in 1996.

“We can have the best people that have no power,” she said.

She said she believes Davis “has the power to make things happen. And I think he has the general population in mind.”

Read more on the candidates here: 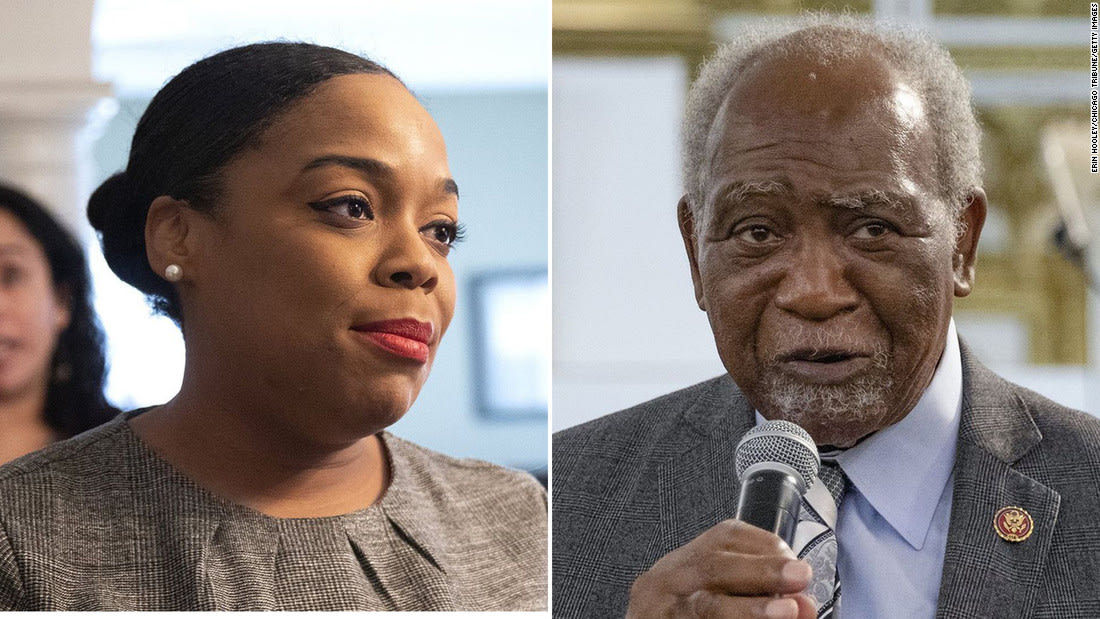 Utah will hold primaries in its four congressional districts as well as the Republican primary for Senate where Sen. Mike Lee is favored to win renomination. Utah Democrats won’t have any federal primaries Tuesday and don’t have a Senate candidate at all, but instead endorsed independent Evan McMullin.

Poll times: Utah is in the Mountain time zone, and polls will close at 10 p.m. ET.

The state's elections are primarily held by mail. All voters will receive a mail ballot and county clerks will begin mailing ballots on June 7. Ballots must be postmarked by June 27, or they can be dropped off at a drop box location before 8 p.m. local time on Election Day. Every county must have at least one in-person vote center open on Election Day.

Oklahoma will hold primary elections for both its Senate seats on Tuesday, but most of the attention will be on the Republican Senate special primary election to fill retiring Sen. Jim Inhofe’s seat. Oklahoma GOP Gov. Kevin Stitt is also facing several Republican challengers in his first reelection race.

What to watch for in these key races:

Poll times: Oklahoma is in the Central Time Zone and polls will close at 8 p.m. ET.

Voter eligibility: Oklahoma voters must show voter ID. All forms of ID must be issued by the US, the state of Oklahoma or a federally recognized tribal government and includes a voter’s name, photograph and expiration date to be considered valid. Oklahoma's Republican primary is only open to registered Republicans. The Democratic primary is open to registered Democrats and unaffiliated voters. Candidates must win a majority of the vote in order to avoid a runoff in August.

Nebraska is holding a special election to fill the seat left vacant in the 1st Congressional District by the resignation of former GOP Rep. Jeff Fortenberry, who was convicted of making false statements and lying to authorities during an investigation of illegal campaign contributions.

What to know about the candidates: Flood was elected to the Nebraska state legislature in 2004 and served as speaker from 2007 to 2013, making him the youngest and longest-serving speaker in the legislature’s history. After being term-limited out of office, Flood won another term in the legislature in 2020. Pansing Brooks also serves in the state legislature, having been elected in 2014. Both candidates are also their parties’ nominees for a full House term this November. Trump would’ve won this district by 11 percentage points in 2020, so Flood is favored to hold the seat for the GOP.

Poll times: Polls close at 9 p.m. ET. Most of Nebraska uses Central time but the western part of the state is on Mountain time. However, polls open and close simultaneously across the state.

Poll times: Polls across the state will close at 8 p.m. ET.

Here's what to know about the key races:

Poll times: Polls across the state will close at 8 p.m. ET.

Voter eligibility: There is not a voter registration deadline in Illinois as voters can register the same day they vote. Only first-time voters who registered by mail need to show voter ID at the polls on Election Day. Illinois voters do not register with a political party. They can choose to either vote in the Democratic or Republican primaries when selecting their ballot.

Read more about the member vs. member races in Illinois here.

The winner will take on incumbent Republican Sen. Tim Scott in November. Scott has served in the Senate since 2013 and previously served in the House of Representatives.

While all of New York’s statewide, federal and local primaries were supposed to take place on June 28, the state’s congressional redistricting process pushed the congressional and state Senate primaries to August. On Tuesday’s ballot, voters will vote in primaries for governor and lieutenant governor and state assembly, plus some local offices.

The most competitive statewide primaries will be for governor, where on the Democratic side, Gov. Kathy Hochul will compete for her first elected term after being elevated to the top job when former Gov. Andrew Cuomo resigned last year. On the Republican side, Rep. Lee Zeldin headlines a field that includes Andrew Giuliani, son of former NYC mayor and Trump attorney Rudy Giuliani.

Here's what to know about the race for governor:

Poll times: New York is in the Eastern time zone, and polls will close at 9 p.m. ET.

Voter eligibility: Only voters registered with a political party can participate in that party’s primary elections in New York. Voters do not need to provide an ID at the polls.