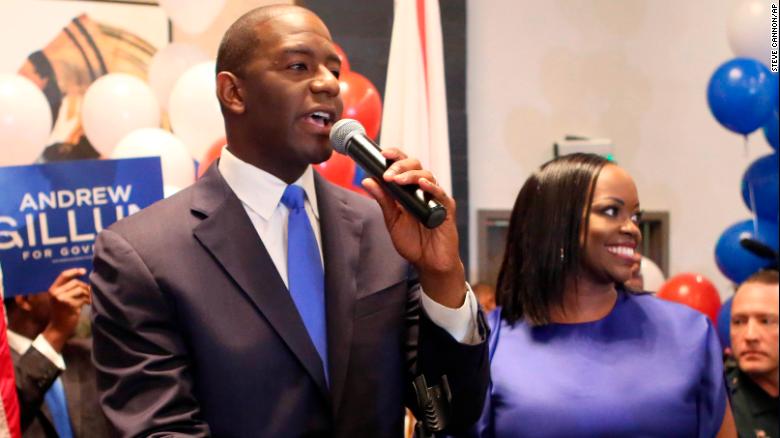 Andrew Gillum, who CNN projects has won Florida's Democratic governor's race, thanked his supporters tonight and told them his plans "for a state that makes room for all of us."

"I sincerely believe that what is going to deliver us to victory is the fact that they are everyday, hardworking people in this state who believe ... that they deserve a voice in our government, too," he told supporters at his headquarters. "And we're going to give it to them."

"This is not my moment. This is our moment."

Gillum is the first black candidate to win a major-party gubernatorial nomination in Florida. He will face Rep. Ron DeSantis, a Trump-endorsed Republican, in a race that pits two 39-year-olds who in many ways mirror their parties' national moods against each other.

"The point has never been lost on me that my name on the ballot is simply a vessel, is simply the name. But what is underneath that name are all the issues that we care so deeply about," Gillum said before ticking off key issues.

Those include fair wages for teachers, reforms in public education, livable wages for Floridians, clean water and oceans, Medicare expansion and better transportation.

Gillum, who is one of seven siblings, also described his humble upbringing and his parents' commitment to work -- his father was a construction worker and his mother was a school bus driver.

"Because of their example, it instilled in me a quality of hard work that I'll never forget," he said.

Congratulations to Andrew Gillum on his victory tonight. What has made Andrew’s campaign so powerful is that he’s not just working hard to win an election, he has laid out a vision for a new course for the state of Florida and our country. No one person can take on the economic and political elites on their own. Tonight, Floridians joined Andrew in standing up and demanding change in their community. That’s what the political revolution is all about and Andrew Gillum is helping to lead it. 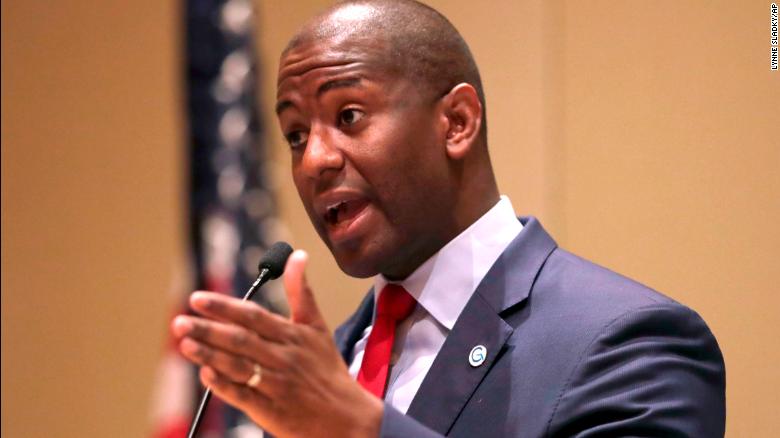 Tallahassee Mayor Andrew Gillum will win the Democratic nomination for governor of Florida, CNN projects, scoring a major victory for the party's progressive wing while taking another step toward becoming the state's first black chief executive.

Backed by Bernie: Backed by Vermont Sen. Bernie Sanders and a coalition of progressive groups, Gillum upset former Rep. Gwen Graham who led in the polls for most of the campaign. He outlasted a field of five competitive candidates, in which he was the only non-millionaire — and only supporter of "Medicare for all" single-payer health care.

Democrats in the race, including billionaire Jeff Greene and the wealthy former Miami Beach mayor Philip Levine, spent more than $100 million for the chance to wrest back control of the governor's mansion, which has been in Republican hands for two decades. Gillum got a late boost when liberal megadonors Tom Steyer and George Soros led a group that donated $650,000 to his affiliated political action committee.

As the primary neared, progressive groups — Indivisible Action, The Collective PAC, The New Florida Vision PAC and the Sanders-inspired Our Revolution among them — banded together to invest an additional $3.5 million in get out the vote efforts supporting Gillum, who campaigned as an outspoken critic of the state's controversial "Stand Your Ground" gun law, which he said at a protest earlier this month "has no place in a civilized society."

In a statement Tuesday night, Sanders cheered Gillum's "vision" and cast Gillum as a leader in the broader progressive movement:

"No one person can take on the economic and political elites on their own. Tonight, Floridians joined Andrew in standing up and demanding change in their community. That's what the political revolution is all about and Andrew Gillum is helping to lead it."

DeSantis -- who Trump supported -- won the Florida GOP governor's primary. He's looking to replace Scott, who is running for Senate.

Scott will face off against Democratic Sen. Bill Nelson in November. 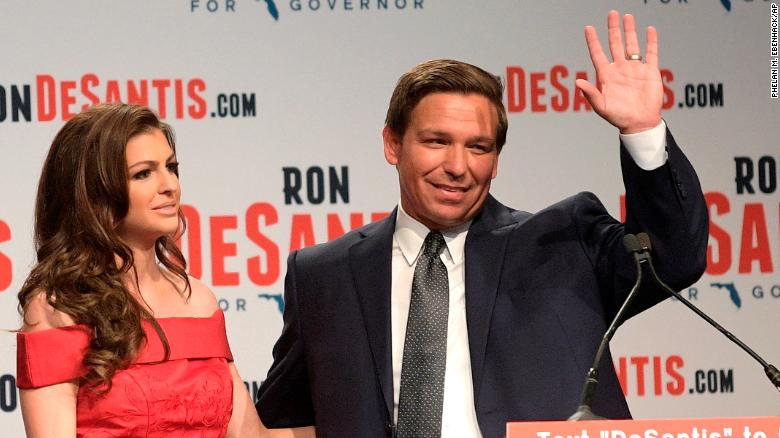 An endorsement from President Donald Trump and frequent appearances on Fox News helped Rep. Ron DeSantis win Florida’s Republican primary for governor over Adam Putnam, the agriculture commissioner who began the race as the favorite.

Trump first endorsed DeSantis, the 39-year-old former Navy lawyer, to replace term-limited Gov. Rick Scott in December 2017, calling him “a brilliant young leader” on Twitter at the time. DeSantis had previously lobbied Trump for his support on Air Force One en route to a political rally in Alabama.

The race is another reflection of Trump’s influence with GOP primary voters.

Putnam, who has been in elected office since winning a state legislative seat when he was 22 years old, had lined up strong support within the state party establishment and outraised DeSantis. 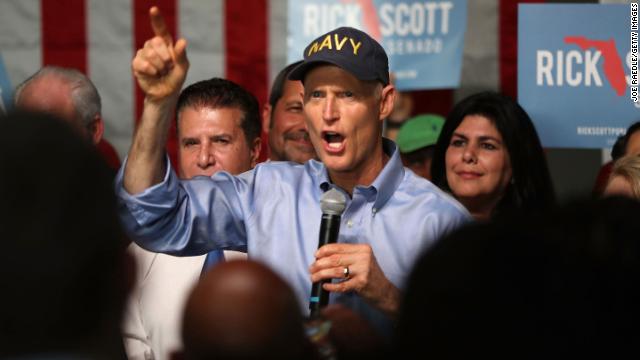 Their wins set the stage for one of the top Senate races nationally in November. 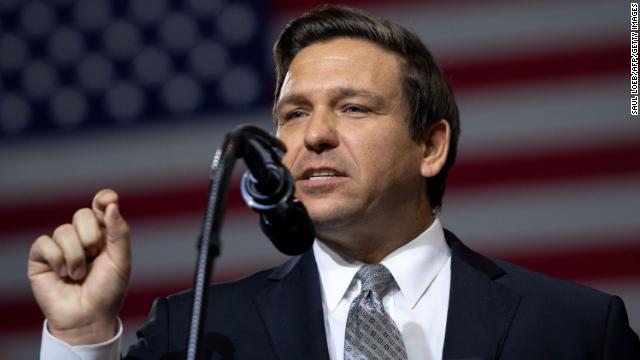 Congressman Ron DeSantis, who received the high-profile backing of President Donald Trump, will win the Republican primary for governor in Florida, CNN projects.

The Trump bump: Last month, the President hosted a rally in Tampa to support DeSantis (among other GOP candidates). The Florida Republican has even released a Trump-heavy campaign ad, which shows him reading Trump's "Art of the Deal" to his son and teaching his daughter to say "Make America Great Again."

The Maricopa County Board of Supervisors has rejected what it termed an "unprecedented" request by County Recorder Adrian Fontes to keep polls open an extra two hours today Tuesday.

Fontes, the top elections official in Arizona's most populous county, said he would petition to extend voting hours in the primary election Tuesday after a contractor failed to set up voting machines across the county's more than 500 precincts, delaying voting at several dozen polling locations.

In response, Steve Chucri, the Maricopa County supervisor, released on a statement on Twitter saying:

"Today we learned 62 polling places were not ready at the start of the day. Members of the Board were not told of any concerns yesterday, when the Recorder first became aware of issues, nor were members notified prior to the polls opening this morning. Now the Board is being asked to step in and take unprecedented action that may confuse voters, delay returns, and have other unintended consequences. We encourage any voter who wants to cast their ballot to be in line at any of your designated polling places by 7 pm and their vote will be counted." 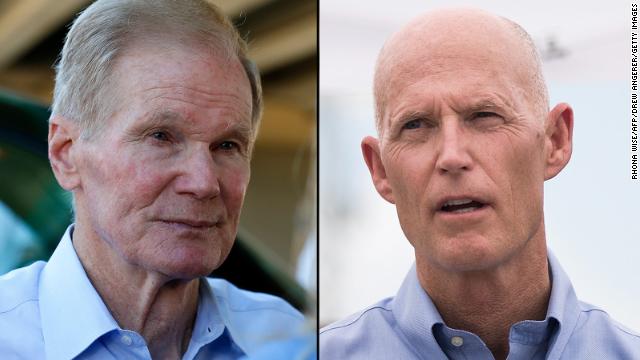 There's a lot of attention on Florida this election cycle, as Democratic Sen. Bill Nelson fights to keep his seat.

But today's election results will not be all that exciting.

Nelson and GOP Gov. Rick Scott have been the presumptive nominees for months — meaning today's vote will only make them, finally, official nominees.