Win or lose, tonight is President Donald Trump’s final appearance ever on a presidential debate stage.

His methods haven’t changed much since his first time out in a primary debate in 2015 — when he sparred with moderator Megyn Kelly and later made sexist attacks on her. He still enters the sessions relying primarily on his instincts as a brawler and doesn’t prepare nearly as much as his adversaries.

He held a brief and informal session earlier on Thursday with some of his team, but did not conduct a full mock debate before tonight.

That has been his practice for most of his relatively brief debating career. Trump has preferred more ad-hoc sessions, with advisers peppering him with questions during down moments, than a full dress rehearsal.

He’s had some hits and misses along the way. Some of his general election debates in 2016, and particularly his final one against Hillary Clinton, were viewed by his team as a success.

After that first debate with a large GOP primary field in 2015, many Republicans wondered how much longer they would have to contend with his outbursts and behavior.

Five years later, those traits — and those concerns — are as present as ever.

The CNN Poll of Polls tracks the average poll result in the race for president between President Trump and Democratic presidential nominee Joe Biden.

The poll of polls includes the most recent polls that meet CNN’s CNN’s standards for reporting and that measure the views of registered or likely voters. The poll of polls does not have a margin of sampling error.

Here's where the candidates stand as of today in the polling average: 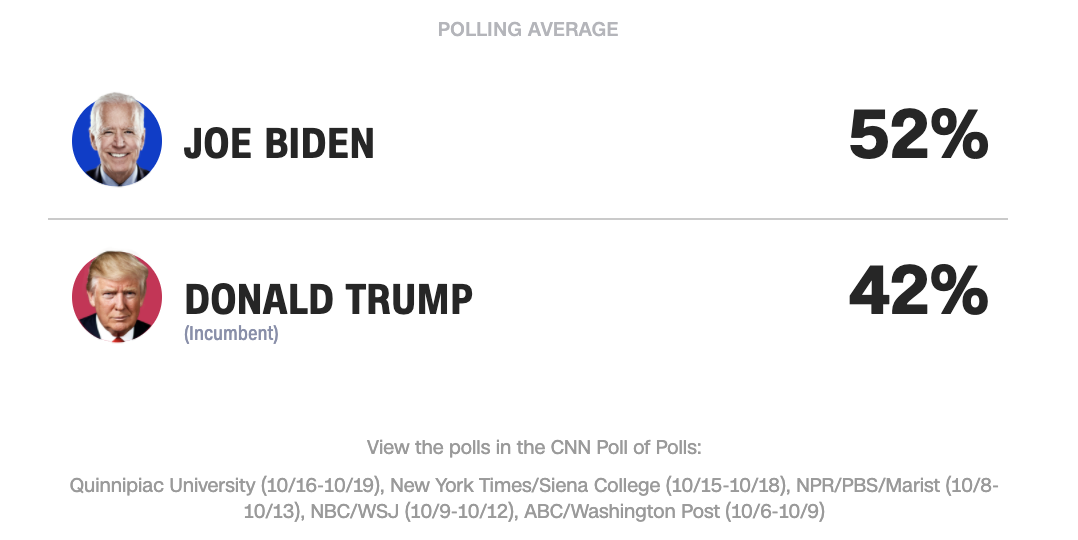 It’s not just the race for the White House that Republicans are anxious about – it’s holding onto their Senate majority.

The first debate caused heartburn for senators locked in tight contests across the country.

Since then, a handful have gently sought to distance themselves from President Trump – hoping to do what they can to prevent significant defeats down-ballot.

If tonight’s debate is a repeat of the first one, watch for even more senators to join that chorus – and begin making the case that a Republican Senate is needed as a check on a potential Joe Biden presidency.

Senate Majority Leader Mitch McConnell has told his GOP senators to do whatever they think is best – even making that point.

Of course, it’s an open question whether such an argument would work at this late stage of the campaign.

The televised event may be the last opportunity for both candidates to reach a massive national audience before Nov. 3.

Here's everything you need to know about the final debate:

Joe Biden’s messaging for the past several months has been consistent – focusing on the coronavirus pandemic and the economy as he’s tried to turn the election into a referendum of President Trump's handling of the crisis.

It’s a contrast to the President, who has waged multiple lines of attacks on Biden to try to find something that will stick.

One of the challenges for Biden tonight is to not get bogged down in the directions President Trump might try to take this debate – including those personal attacks on his family.

One tactic Biden used during that first debate that he’s expected to repeat again tonight is looking directly into camera as he makes his case.

These were moments that the Biden campaign feels worked well for Biden last time around as he looked to connect with voters at home.

Campaign advisers tell CNN they now believe it was a huge mistake for President Trump to cancel on last week’s debate, making a breakout moment a must tonight to shake up the race.

One adviser said Trump needs a “leadership moment” at the debate as Joe Biden is now seen as the front runner heading into the final stretch of this campaign.

A crucial focus for Trump tonight is to reach out to male voters, as advisers worry men — once a key demographic strength for Trump — may be slipping away from the President, as have suburban women and elderly voters.

Another adviser said if Trump fails in his mission tonight, watch for the President to become increasingly desperate in the final days of this campaign.

Both campaigns agreed that the acrylic glass that was once up in the debate hall was not needed and should be taken down, Frank Fahrenkopf, head of the debate commission, told CNN.

Fahrenkopf told CNN earlier today that the acrylic glass was put up at the recommendation of the medical advisers on the ground.

The commission also released some additional key details about tonight's debate, via pool:

Here's what the inside of the debate hall looks like:

It takes at least 270 electoral votes for a presidential candidate to win the election.

CNN's John King takes a look at the states that are going to be key in former vice president Joe Biden and President Trump's possible paths to victory.