Postmaster General Louis DeJoy told a Republican-led Senate committee that since his arrival, the Postal Service has removed 700 collection boxes, of "which I had no idea that that was a process."

When he found out this was happening, DeJoy told lawmakers he and the leadership team discussed it and decided to halt the removals.

"When I found out about it, we socialized with the leadership team and looked at what the excitement it was creating so I decided to stop it and we’ll pick it up after the election. But this a normal process that has been around for 50 years," DeJoy said.

DeJoy said there are over 140,000 collection boxes in the US, and over the last 10 years, about 35,000 of them have been removed. He said the decision to remove boxes is a "data-driven method" where USPS looks at utilization of the post boxes, where they place new post boxes and where communities are growing.

With regards to sorting machines, DeJoy said USPS evaluates its machine capacity before deciding to move them.

"The mail volume, you know, is dropping very rapidly and especially during the Covid crisis. And package volume is growing, and when I spoke with the team — when this too became —got a lot of air play, we really are moving these machines out to make room to process packages. We still have hundreds of these machines everywhere and still not any kind of drain on the capacity, DeJoy said.

"I repeat, both the collection boxes and this machine closedown I was — I was made aware when everybody else was made aware," the postmaster general said.

Postmaster General Louis DeJoy, speaking to senators this morning, said he supports mail-in voting and has voted that way "for a number of years."

"I think the American public should be able to vote by mail," DeJoy said, adding that the Postal Service will support it.

“First, I'd like to emphasize that there has been no changes in any policies with regard to election mail for the 2020 election,” DeJoy said at the beginning of the hearing.

Postmaster General Louis DeJoy said he did not speak to President Trump about controversial operational initiatives that some Democrats claimed could undermine mail-in voting ahead of the election.

DeJoy — a Trump ally and Republican donor — said he has only spoken about USPS to the President when he first accepted the job.

"Did you discuss those changes, or their potential impact on the November election with the President or anyone at the White House? And I'll remind you you're under oath," Democratic Sen. Gary Peters asked.

"I have never spoken to the President about the Postal Service other than to congratulate me when I accepted the position," DeJoy said.

Following public outcry, DeJoy, announced Tuesday that the changes would be suspended until after the election.

Postmaster General Louis DeJoy defended his leadership of the US Postal Service this morning during his opening statement, and assured the Republican-led Senate committee that he and USPS are committed "to delivering the nation’s election mail securely and on time."

"As we head into the election season, I want to assure this committee and the American public that the Postal Service is fully capable and committed to delivering the nation’s election mail securely and on time," DeJoy said. "This sacred duty is my number one priority between now and election day."

DeJoy stressed the USPS is "at fundamental risk" of not fulfilling its mandate in coming years "to provide prompt, reliable, and universal postal services to the American public – in an efficient and financially self-sustaining fashion" due to the financial hardships that have been exacerbated by the coronavirus pandemic. He called on Congress to swiftly pass legislation to provide financial relief.

"Our business model – as established by Congress – requires us to pay our bills through our own efforts. I view it as my personal obligation to put the organization in a position to fulfill that mandate," DeJoy said.

"Despite our deep, longstanding financial problems, there is an incredibly strong base to build upon – and a tremendous desire of the public for the Postal Service to succeed," DeJoy added.

Democratic Sen. Gary Peters, the ranking member on the Senate Homeland Security and Governmental Affairs Committee, said he has received more than 7,500 reports from people in his state of Michigan and across the US who are concerned about what's happening at the United States Postal Service.

"They have written to me about skipping doses of their medication, and their small businesses losing their customers or having to layoff employees. All because of changes you directed," he said in his opening remarks.

Peters went on to say that Postmaster General Louis DeJoy's decisions "have cost Americans their health, their time, their livelihoods and their peace of mind."

"You owe them an apology for the harm you have caused – and you owe all of us clear answers," the Michigan lawmaker said.

"The country is anxious about whether the damage you have inflicted so far can be quickly reversed and what other plans you have in store that could further disrupt or damage reliable, timely delivery from the Postal Service," he added.

Postmaster General Louis DeJoy is testifying in front of the Republican-led Senate Homeland Security and Governmental Affairs Committee this morning.

The hearing is the first time that DeJoy, a fundraiser and ally appointed by President Donald Trump, will publicly answer questions about recent changes to the US Postal Service that have sparked public outcry.

Here are some key things to know about DeJoy:

What led to this point: Earlier this month, postal workers across the country sounded alarms over changes DeJoy had made to USPS since taking over in June. The changes included cutting overtime and limiting post office hours, which workers said were causing massive delivery delays. With millions of Americans expected to vote by mail this November due to the coronavirus, lawmakers on both sides of the aisle began to worry this could impact the election.

While lawmakers began asking questions on changes, state officials voiced increasing concern following letters from the Postal Service to more than 40 states warning that ballots may not be delivered in time for the election. Around the same time, CNN obtained internal documents showing a reduction plan to remove nearly 700 high-volume mail sorters from postal facilities across the country.

And then came the images of iconic blue mailboxes being carted away on trucks. DeJoy and some Republicans defended the changes as necessary to combat the Postal Service's dire financial situation, but Democrats weren't buying it.

The series of changes, coupled with Trump's battle against mail-in voting, has fueled concerns that the Trump administration is using the Postal Service to interfere with the election. 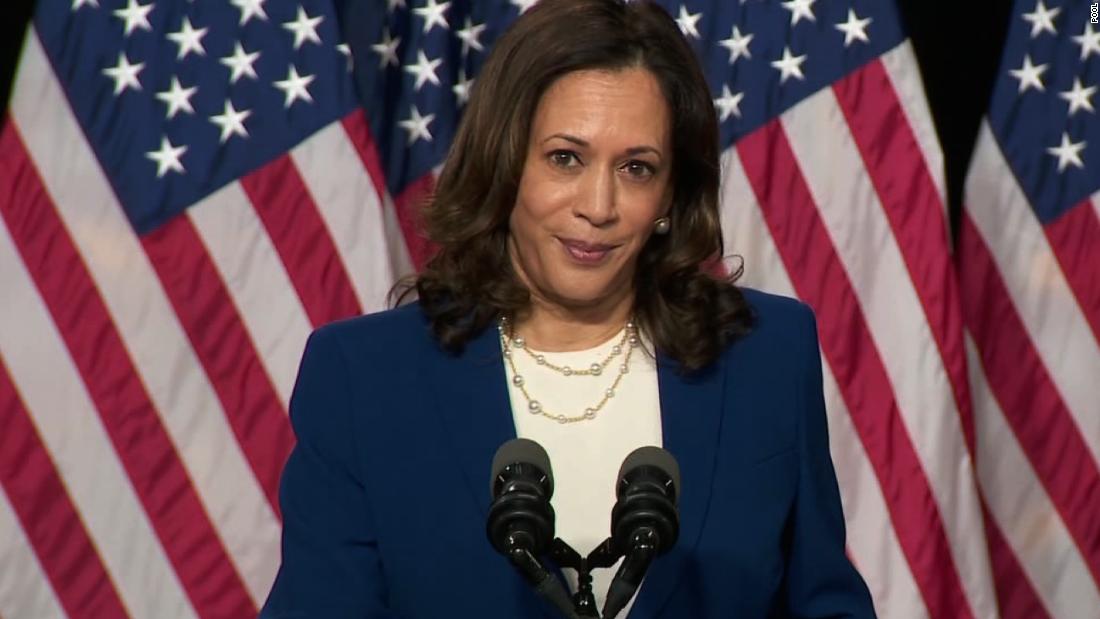 Fresh off the Democratic National Convention, vice presidential nominee Kamala Harris is back to her day job as a US senator for a high-profile showdown with the embattled head of the US Postal Service over changes that could impact the 2020 vote.

But Harris, who attracted national attention as a fierce participant in Senate proceedings, doesn't plan to ask questions during Friday's virtual hearing.

The former California prosecutor will instead submit a "lengthy list of questions" in writing to Postmaster General Louis DeJoy, an aide told CNN.

Harris' decision not to verbally participate in the hearing appears to be a sign of her new role as Democratic presidential nominee Joe Biden's running mate, a position often seen as one where it's most important to "do no harm" to the top of the ticket. It also could be an indicator of how the Biden camp plans to deploy Harris in the homestretch of a campaign where Biden's team has worked to make a referendum on President Donald Trump.

The testimony is also scheduled the morning after Harris' running mate gives the biggest speech of his career to date, a time historically reserved for cable networks to reflect on the nominee's speech — and not testimony involving the vice presidential nominee.

Harris is one of six Democrats on the Senate Homeland Security and Governmental Affairs Committee, where DeJoy is testifying for the first time amid an uproar over cuts to USPS service that Democrats warn threaten the ability for mail-in ballots to be delivered in a timely fashion.

Some postal union leaders expressed skepticism that Postmaster General Louis DeJoy's Tuesday announcement that mail-processing equipment will remain in place would fully restore the capacity of the Postal Service.

DeJoy announced that all changes being made to the USPS — including moving mail processing equipment and blue collection boxes — would be suspended until after the Nov. 3 election, but more than a dozen postal union leaders across the country have told CNN that sorting machines have already been removed or taken out of service.

CNN previously reported that documents indicated 671 machines used to organize letters or other pieces of mail were slated for "reduction" in postal facilities this year. The Postal Service said in a statement last week that it "routinely moves equipment around its network as necessary to match changing mail and package volumes."

Miriam Bell, general president of a local chapter of the American Postal Workers Union in North Carolina, said seven sorting machines at a Charlotte postal facility have been either separated out, dismantled or entirely removed in recent weeks.

Asked if she expects them to return, Bell said, "We truthfully do not know," adding, "it is highly unlikely they will be put back in place."

Roscoe Woods, president of APWU Local 480-481, said a dozen machines at a distribution center in Pontiac, Michigan, had been removed from service in recent weeks, and despite DeJoy's announcement, he said he has heard from postal management that the machines are not supposed to be put back to work.

"As of today, they were told not to power them back up," Woods said.