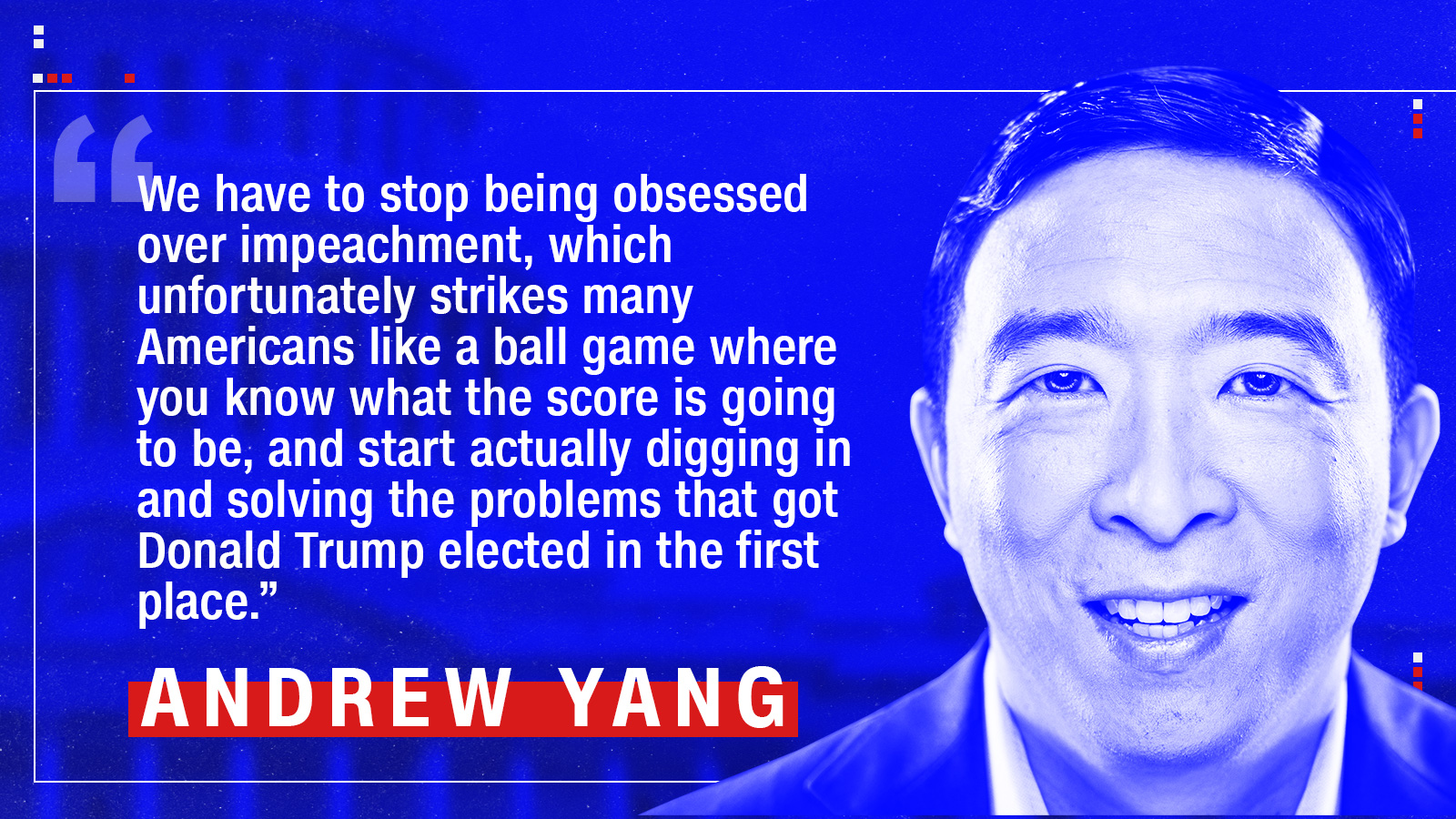 Andrew Yang suggested tonight that Democrats are too focused on the impeachment of President Donald Trump, and that it is at the party’s peril.

“We have to stop being obsessed over impeachment, which unfortunately strikes many Americans like a ball game where you know what the score is going to be, and start actually digging in and solving the problems that got Donald Trump elected in the first place,” Yang said, just a day after House Democrats impeached the President.

The businessman argued that the more Democrats “act like Donald Trump is the cause of all our problems, the more Americans lose trust that we can actually see what’s going on in our communities and solve those problems.”

This stance puts Yang at odds with some of his opponents, some of whom have said they not only support impeachment, but – in the case of US senators – suggested they would vote in favor of removing the President from office.

Pete Buttigieg responded to question about the economy by arguing “this economy is not working for most of us” because “people are not getting paid enough.”

“I know you’re supposed to say middle class and not poor in politics, but we have to talk about poverty in this country,” the South Bend, Indiana, mayor said. “The biggest problem in our economy is simple. People are not getting paid enough. That is not the result of some mysterious cosmic force. It’s the result of bad policy.”

President Donald Trump has been citing the economy – particularly the rising stock market – as a reason for him to win four more years in office. But Democrats, like Buttigieg, see the stock market as a poor indicator of a strong economy.

Buttigieg is not the first presidential candidate to argue Democrats need to focus on poverty. Former Housing and Urban Development Secretary Julián Castro, who did not qualify for the December debate, has been focusing on the issue in recent months.

Former Vice President Joe Biden decried tax cuts to the wealthy, and said he wants to invest in services crucial to helping the middle class, like education.

At Thursday's debate, Sanders called the deal, negotiated to replace former President Bill Clinton’s North American Free Trade Agreement, “a modest improvement over what we have right now,” but said it won’t stop companies from outsourcing their manufacturing.

“I will not be voting for this agreement, although it makes some modest improvements,” he said.

Klobuchar, meanwhile, pointed to another populist Democrat -- Ohio Sen. Sherrod Brown, once seen as a presidential contender -- saying he backs the new deal and she will, too.

“We have a change with this agreement,” she said. Klobuchar also touted alterations negotiated by Democrats, saying the pact now brings “better labor standards, better environmental standards, and a better deal.”

Massachusetts Sen. Elizabeth Warren used the first question during the debate -- about impeachment – to frame her argument against former Vice President Joe Biden and South Bend, Indiana, Mayor Pete Buttigieg by questioning the willingness of some candidates to take on the powerful and wealthy.

“We need a candidate for president who can draw the sharpest distinction between the corruption of the Trump administration and a Democrat who is willing to get out and fight not for the wealthy and well-connected, but to fight for everyone else,” Warren said. “That’s why I’m in this race.”

Warren is sticking with an argument she has made coming into the debate: Because Biden and Buttigieg raise money from top Democratic donors, they are not willing to take on monied interests.

Sen. Elizabeth Warren called the impeachment of President Trump a moment for the Senate to "uphold our Constitution" in her answer to the first question tonight from moderators during tonight's Democratic debate in Los Angeles.

Sen. Bernie Sanders called President Trump a "pathological liar" a day after the President was impeached by the House.

Sanders will likely need to be in Washington if the Senate convenes a trial to decide whether to convict Trump and remove him from office. 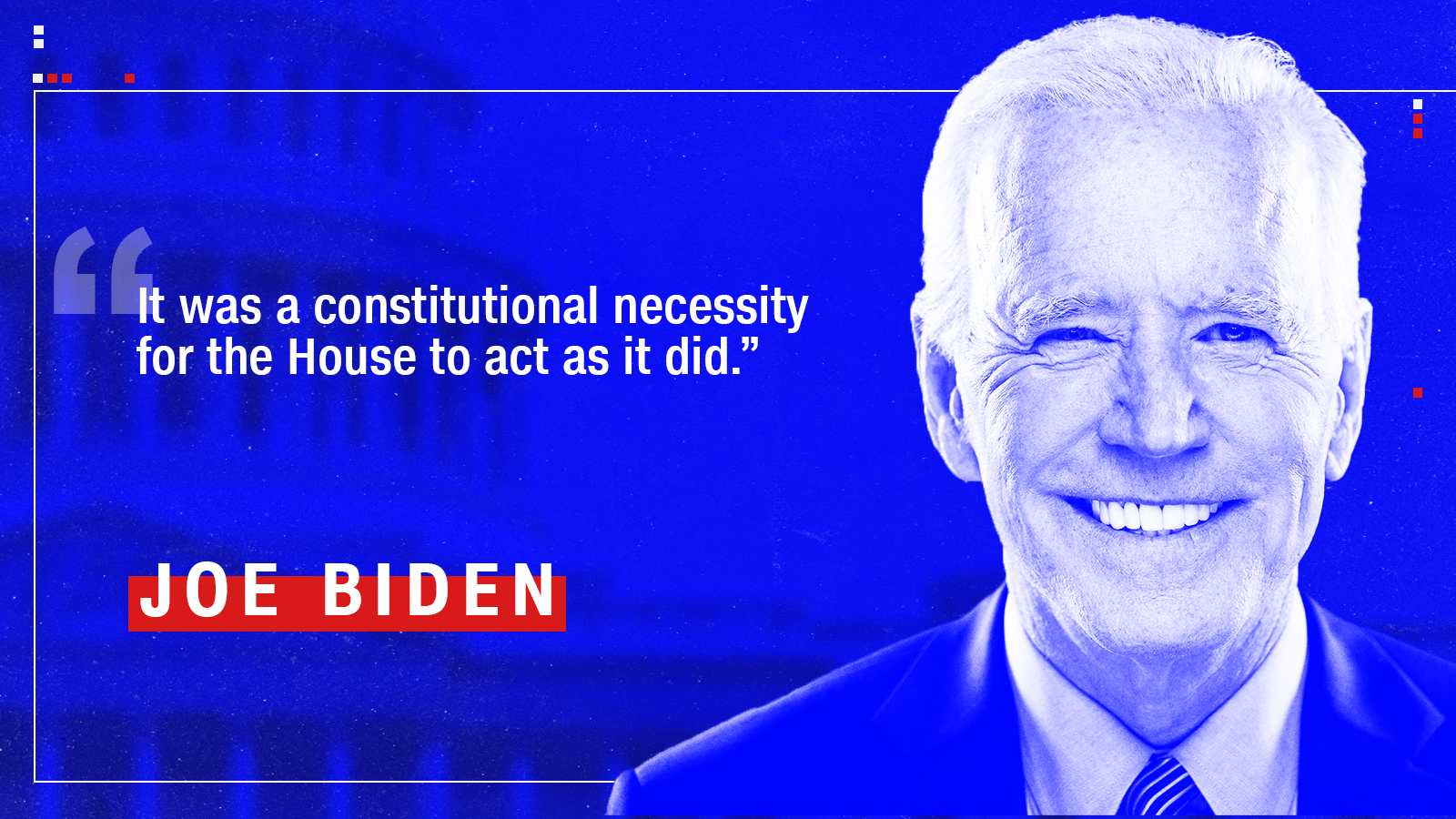 The first question tonight in the Democratic debate was on the impeachment of President Trump and was directed at former Vice President Joe Biden who called it a "constitutional necessity."

"It was a constitutional necessity for the House to act as it did," Biden said in his opening remarks. "Is it any wonder that if you look at the international polling that's been done, that the Chinese leader is rated above the American president, or that Vladimir Putin congratulated him, saying stand fast and that in fact it was a mistake to impeach him. We need to restore the integrity of the presidency, of the office of the presidency."