Our live coverage of House Speaker Paul Ryan's farewell speech has ended. Scroll through the posts below to read excerpts from his speech.

He also offered some advice to old and new members, urging them to stay true to themselves.

"This place is full of wonders and opportunity. But do your best to stay grounded. The way I think of this is, either you change things or they change you," Ryan said. "So you have to keep your sense of self. Work hard at staying who you are. Insist on it. It is what I have prayed about every morning since I first came here. To keep my sense of self."

During his speech, Ryan thanked his colleagues and friends, but noted it was his family that was most important. "Being a husband and a dad is everything to me," he said.

Towards the end of his farewell address, Speaker of the House Paul Ryan gave a little shoutout to his former running mate, Mitt Romney, who was elected to the Senate in November.

"What comes next? Well, we’ll have a lot of new faces around Congress next year. I hear great things about this new fresh-faced guy from Utah," Ryan said.

He recently told Paul Kane with The Washington Post about a phone call Romney made to Ryan on the day he announced he was retiring:

That was about a year ago. Yeah, we’re good friends. We talk all the time. You know what I said? He knows my phase of life. He called me up the day I announced. He said, “What? The one friend I’ve got in Washington and you’re leaving?” And then he said, “I was going to get a two-bedroom apartment and offer you a room so you don’t have to sleep in your office anymore.” You know, he’s got a pretty good sense of humor. 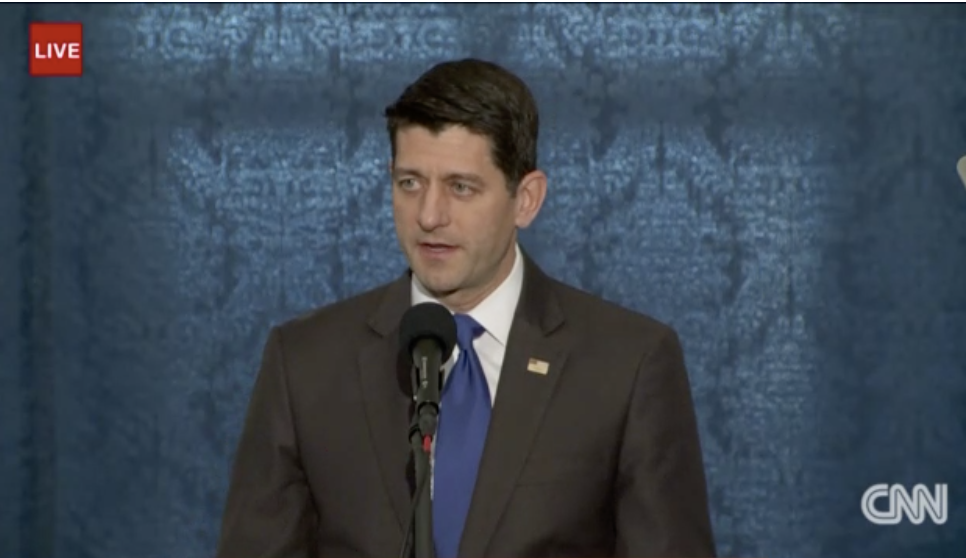 In his farewell remarks at the Library of Congress, Paul Ryan warned about the current state of political discourse, telling those gathered, “too often, genuine disagreement quickly gives way to intense distrust."

"We spend far more time trying to convict one another than we do developing our own convictions," he said.

Ryan went on to say:

“This kind of politics starts from a place of outrage, and seeks to tear us down from there. So … how do we get back to aspiration and inclusion, where we start with humility, and seek to build on that? I don’t know the answer to that.”

Addressing the need for immigration reform in his farewell remarks at the Library of Congress, House Speaker Ryan called for a solution that "includes the Dreamers, those who came here through no fault of their own, and ultimately the undocumented population."

Ryan suggested a comprehensive immigration fix “is an economic and moral imperative. And it would go a long way toward taking some of the venom out of our discourse.” 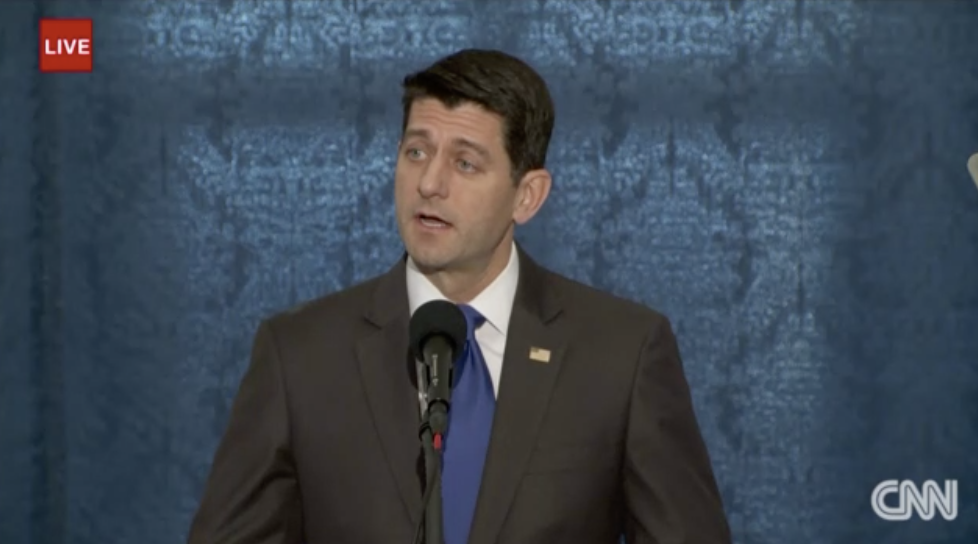 "After years of doubt, years of the cynics saying it could not be done, we achieved the first major overhaul of our tax code in 31 years," he said.

"Think about it. We went from having the worst tax code in the industrialized world to one of the most competitive. This is something I worked on my entire adult life, and it is something that will help to improve people’s lives for a long time to come."

Reality check: The 2017 tax overhaul was indeed the first major overhaul of the U.S. tax code in three decades.

And it did make the US tax code more competitive, at least in terms of corporate tax rates. The top rate was dropped to 21% from 35%. As a result the US is now more in line with the average among OECD nations. (Prior to the overhaul, it had highest combined statutory corporate income tax rate of the group.)

But it’s premature to assert the code is “among the most competitive” and “will help to improve people’s lives for a long time to come.” That’s in part because the effects and details of many other changes made to business taxes, particularly for US multinationals, are still being wo worked out. 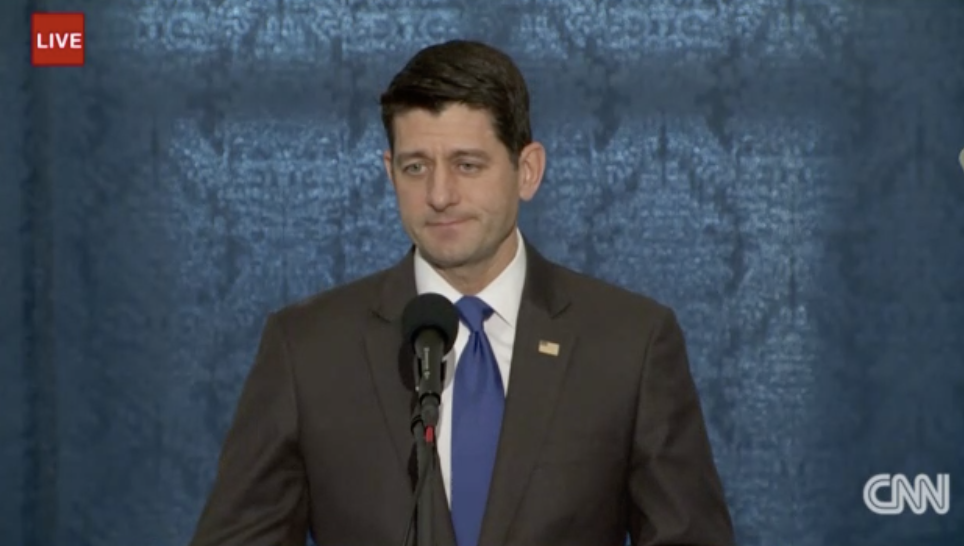 Paul Ryan, summarizing what Congress did during his time as Speaker of the House, said Congress took on "some of the biggest challenges of our time, and made a great and lasting difference in the trajectory of this country."

"We began a historic rebuilding of our military and national defense," he said.

A key point to remember: As House Budget committee chairman, Ryan supported the 2011 Budget Control Act that cut government spending, including that for the defense of the country, and prevented a debt ceiling crisis.

Congress has passed laws since then to avert those cuts on domestic and defense programs. This year, President Trump signed a Ryan-backed bill to give the Pentagon $700 billion, which the Associated Press called “the biggest budget” the department “has ever seen.” 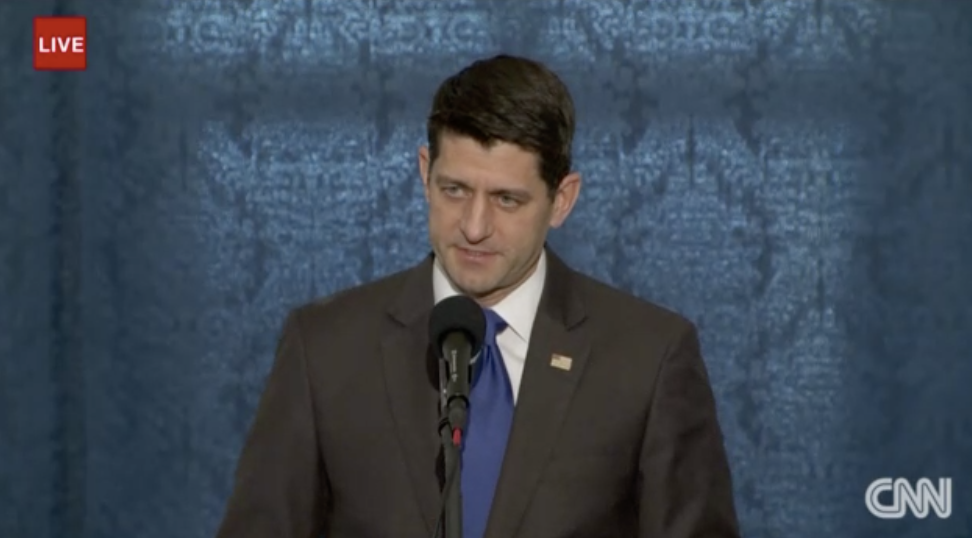 House Speaker Paul Ryan, in his farewell address at the Library of Congress Great Hall just now, touted years of economic growth under his leadership and the Trump administration:

"Three years ago, when we last gathered in this hall, we began a great journey," he said. "To set our nation on a better path. To move our economy from stagnation to growth."

Ryan and his fellow Republicans criticized the policies of President Obama for leading to a weak economic recovery after the great recession ended in June 2009. Back when Ryan assumed the speakership in October 2015, the budget sequester was still having a residual effect by reducing federal spending.

Under President Trump, however, GDP growth has picked up, rising to a seasonally adjusted annual rate of 2.8 percent, including a high of 4.2 percent during the second quarter of this year.

For context, during the last seven years of Obama’s presidency, the GDP grew at just 2.1 percent. 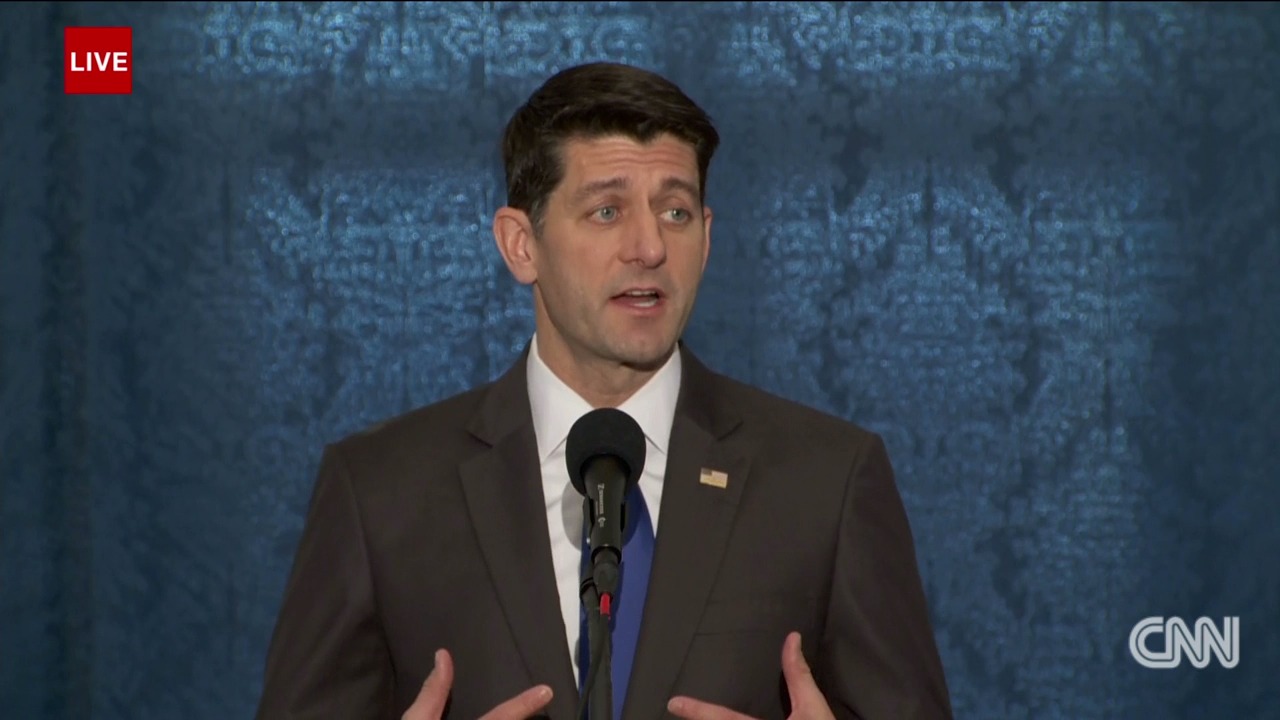 Speaker of the House Paul Ryan just claimed that the current Congress passed more than 1,000 bills.

"This House is the most productive we have had in at least a generation," he said. "To date, we have passed 1,175 bills, more than half of them with bipartisan support."

But remember: It appears that Ryan is defining the productivity of the House based upon the number of bills passed, even though he as he notes that many of those bills were never signed into law. And of those bills, many don’t appear to be that important to the nation; Although naming a post office after Merle Haggard is pretty cool, it doesn’t help that many taxpayers.

Ryan contends that there were a number of bills that were significant: a surge in spending for the military, new programs to attack the opioid crisis and a major tax code overhaul that slashed the rate for corporations and the wealthy, and more modestly for other individuals. But that also leaves off his other top goals, including repealing Obamacare and reforming immigration policies, and his self-proclaimed “greatest unfinished business” of reducing Medicaid, Medicare and Social Security spending to curb sky-high U.S. deficits.