Our live coverage has ended for the day. Scroll through the posts below to read more about how the vote unfolded.

“The video was idiotic and immature and childish and stupid, but I don’t think it was a threat. I think it was in very poor taste,” Rice told CNN, who plans to vote "no."

Rep. Fred Upton, another GOP impeachment backer, said the resolution goes a “stretch too far” by removing Gosar from committees. He said he would have been more comfortable if it were just a censure resolution.

Rep. Dan Newhouse, who voted to impeach Trump, said he was leaning against backing the measure. He said that a majority party removing minority party members from their committees goes “down a dangerous path.”

Reps. Adam Kinzinger and Liz Cheney both plan to vote for it.

House Speaker Nancy Pelosi condemned GOP Rep. Paul Gosar for his incendiary social media posts, pointing out that they were specifically targeted at Rep. Alexandria Ocasio-Cortez, a woman of color.

"As a woman Speaker of the House, I want to be clear, these threats specifically target a woman, a woman of color, which is... a global phenomenon, meant to silence women and keep them from positions of authority and participating in public life," said Pelosi, speaking from the House floor today.

Gosar is facing censure for posting a photoshopped anime video to his Twitter and Instagram accounts showing him appearing to kill Ocasio-Cortez of New York and attacking President Biden.

"This is about workplace harassment and violence against women," Pelosi added.

Pelosi made her remarks as the House was set to vote on a resolution that both censures Gosar of Arizona and removes him from his two committee assignments.

The House is debating a resolution that censures Rep. Paul Gosar and strips him of his two committee assignments, which if passed would be the first time a sitting House member will be censured in more than 10 years.

The action led by House Democrats represents a major rebuke to the Arizona Republican for posting a photoshopped anime video to social media showing him appearing to kill Democratic Rep. Alexandria Ocasio-Cortez and attacking President Biden.

Gosar later took down the video after facing criticism but did not apologize, and House Democrats have made clear they believe he must face significant consequences for his actions. The episode underscores the rising tensions and deepening distrust between Democrats and Republicans in Congress.

The House will vote Wednesday on a resolution that censures Republican Rep. Paul Gosar of Arizona and removes him from the Committee on Oversight and Reform, as well as the House Committee on Natural Resources..

A censure resolution is the most severe form of punishment in the House, and requires the censured member to stand in the well of the House while the resolution is read out loud.

The last lawmaker to be censured was then-Rep. Charlie Rangel, a New York Democrat, for multiple ethics violations back in 2010.

The House ethics committee found the 20-term Harlem Democrat guilty on 11 counts of violating House rules, including failing to pay taxes on a vacation home in the Dominican Republic and improperly using his office to raise money for an educational center bearing his name.

Addressing the House, Rangel admitted he had made "serious mistakes," but asked for a lighter penalty than censure, which is the most serious punishment the House can impose short of expulsion.

Rangel, a former chairman of the tax-writing Ways and Means Committee, insisted he never used his office for "self-enrichment."

After being censured, Rangel ripped the decision to impose censure as a "very, very, very political vote." But "at long last this two-year nightmare is over," he said.

House Majority Leader Steny Hoyer said the issue of censuring GOP Rep. Paul Gosar “is not about Democrats or Republicans.”

“If a Democrat does what Gosar did, I will sponsor the censure,” he told CNN. “This is about a threat and a visual portrayal of a member killing another member. If a Democrat did that, they ought to get the same treatment.”

He said this when walking onto the floor to vote on the rule to move forward for the censure.

He also said the House will likely proceed with debate on the Build Back Better Act tomorrow.

The House will vote soon on a resolution that both censures Republican Rep. Paul Gosar of Arizona and strips him of his two committee assignments.

Gosar is facing censure for his posting of a photoshopped anime video to his Twitter and Instagram accounts showing him appearing to kill Democratic Rep. Alexandria Ocasio-Cortez of New York and attacking President Biden.

A censure resolution is the most severe, if symbolic, form of punishment in the House, and would represent a dramatic moment on the House floor that hasn’t happened in over a decade.

Here’s how it would work: After the resolution is adopted, the lawmaker who is being reprimanded is required to stand in the well of the House while the resolution is read out loud by whoever is presiding over the chamber.

The last time a member was censured was in 2010, when former Democratic Rep. Charlie Rangel of New York was censured by his own party over various ethics violations. Afterward, Rangel was recognized to address the House for one minute. Video of that is here.

However, Gosar – who has been somewhat defiant in the face of backlash over his violent anime video – could refuse to show up. If that’s the case, Democrats could still proceed with the censure resolution without him present, even though he is required to be there.

In an extreme circumstance, the House Sergeant at Arms could be compelled to haul Gosar to the chamber, but Democratic sources downplayed the prospect of that happening.

The floor debate on the resolution will occur just like any other floor debate, where each side will have time to debate the measure before it gets a vote. 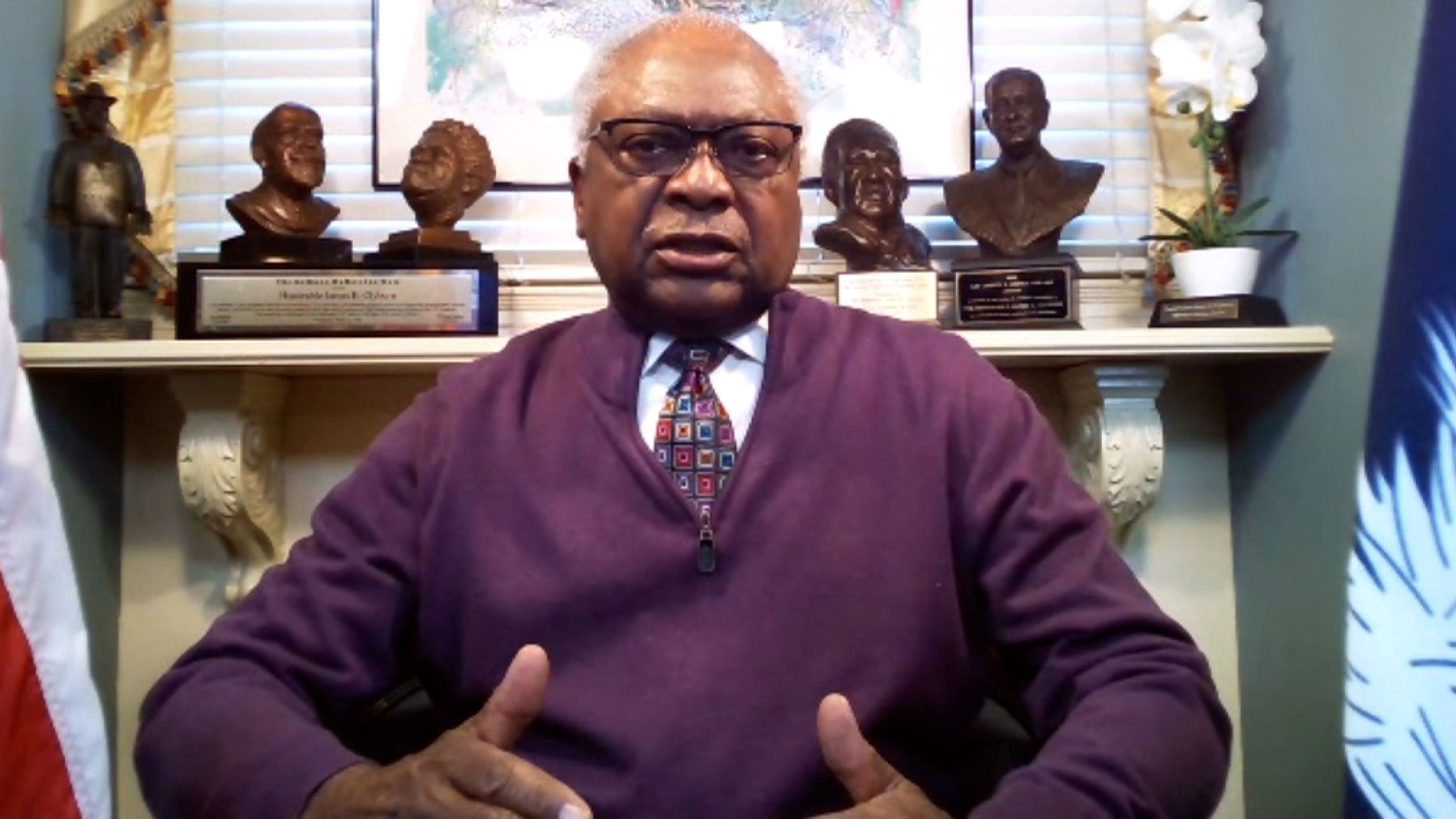 House Majority Whip Jim Clyburn dismissed GOP threats of retaliation in response to Democrats' censure resolution against Rep. Paul Gosar of Arizona, saying Republicans are "free to do that" if they win back control of the House in next year's midterms.

"Well, if they take back the House, they're free to do that," Clyburn, a Democrat from South Carolina, said Wednesday on CNN. "But if they really want to be representatives of what America is all about, they will take each case, and deal with it, the same way we're doing."

Clyburn told CNN that "Nobody is out looking for anybody to censure."

"The American people will know whether or not this is a standard in this particular instance," he said. "If they want to play childish games, then that's for them. I don't think the American people is going to stand for that. I certainly will not."

Gosar is facing censure for his posting of a photoshopped anime video to his Twitter and Instagram accounts showing him appearing to kill Democratic Rep. Alexandria Ocasio-Cortez of New York and attacking President Biden. Democrats' decision to pursue a censure resolution and to strip Gosar of committee assignments follows GOP leadership's not to pursuing any action against the Arizona Republican congressman.

House Minority Leader Kevin McCarthy told reporters that Gosar had explained his actions during a closed-door conference meeting on Tuesday morning, and his explanation was well received in the conference, according to attendees.

GOP Rep. Paul Gosar is sitting at the back of the House chamber with his mask hanging around his chin as the House starts to take procedural votes that will set up a censure vote against him later in the afternoon.

Gosar isn’t sitting on the floor where most members sit, he is sitting next to the cloak room behind the floor seats.

Formal debate on the resolution to censure GOP Rep. Paul Gosar and strip him of his committee assignments will begin as soon as these two votes have concluded.