Former President Barack Obama said President Donald Trump is "capitalizing on resentment that politicians have been fanning for years" and questioned "What happened to the Republican Party?" a preview of Obama's message for the fall's midterms — and his most pointed rebuke to date of his successor in the White House.

Our live coverage of President Obama's speech has concluded, but you can scroll down below for highlights. Visit CNN Politics for more. 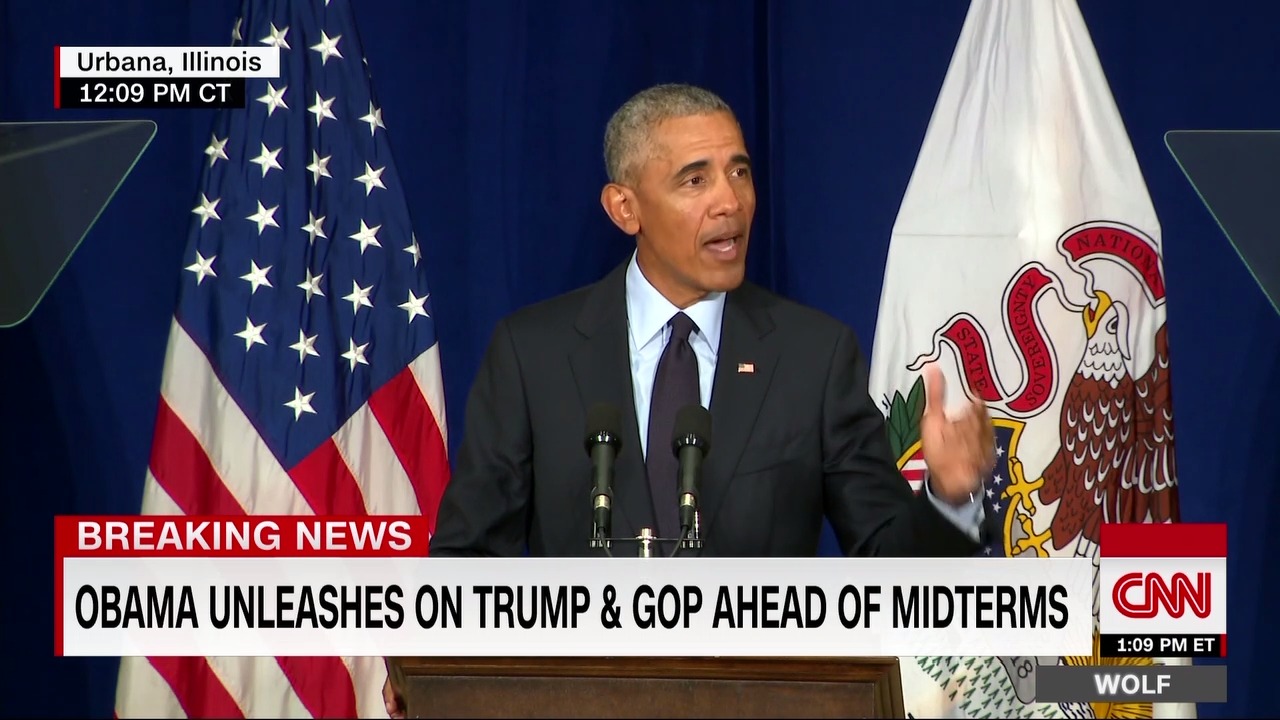 President Obama ended his speech on Friday with a message of hope for those concerned about the country's current path: "We have been through much darker times than these."

Somehow, Obama said, "each generation of Americans carried us through to the other side."

They did that "not by sitting around and waiting for something to happen, not by leaving it to others to do something, but by leading that movement for change themselves," he said.

"And if you do that, if you get involved and you get engaged and you knock on some doors and you talk with your friends and you argue with your family members and you change some minds and you vote, something powerful happens. Change happens. Hope happens."

He told the assembled students that taking America "in the direction of fairness and justice and equality and opportunity" could "be the legacy of your generation."

"You can be the generation that at a critical moment stood up and reminded us just how precious this experiment in democracy really is, just how powerful it can be when we fight for it, when we believe in it."

He ended the speech, which went just over an hour, by telling them, "I believe in you," and promising he would "be right there with you every step of the way."

In other words, the former president is no longer going to shy away from speaking out. 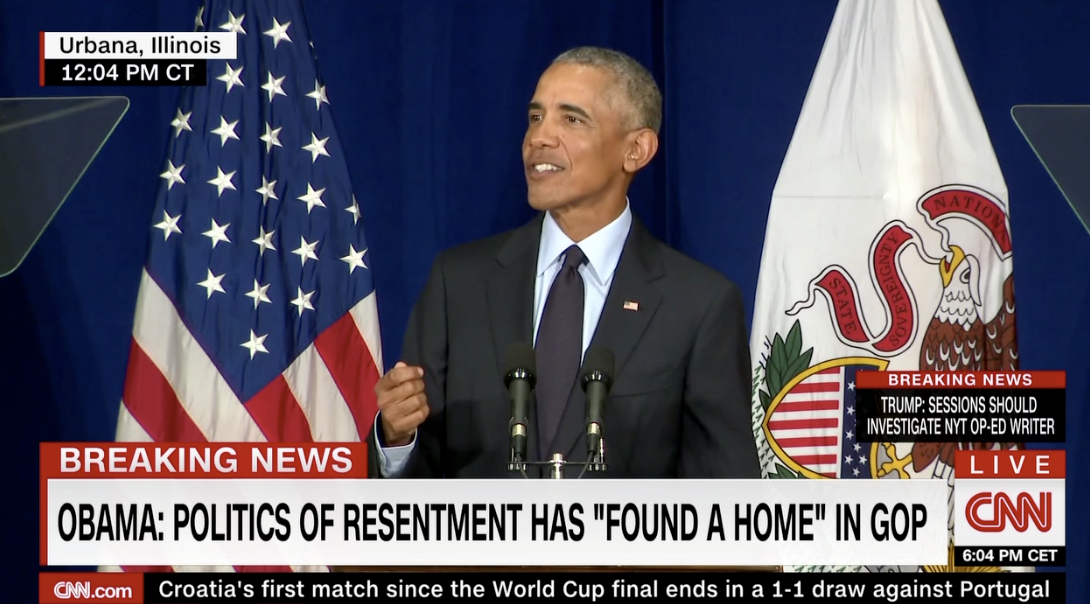 President Barack Obama, calling on Americans to stop looking for reasons not vote and instead look for hard-working people with "America's best interest at heart," told students it was indifference that was the greatest threat to our democracy, and not the current president.

"The antidote to a government controlled by a powerful few, a government that divides is a government by the organized, energized, inclusive many. That's what this moment's about," he said.

Obama continued: "That has to be the answer. You cannot sit back and wait for a savior. You can't opt out because you don't feel sufficiently inspired by this or that particular candidate. This is not a rock concert. This is not Coachella. We don't need a messiah. All we need are decent, honest, hard-working people who are accountable and who have America's best interests at heart." 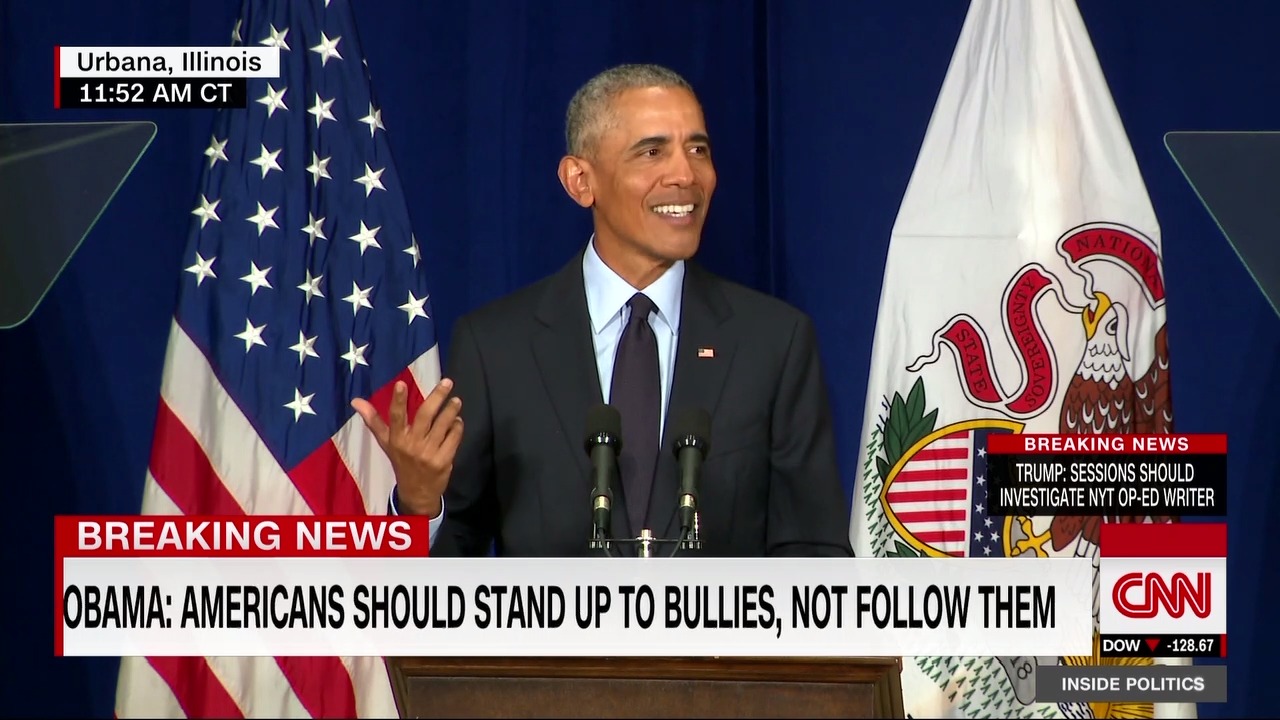 Speaking of ways to make democracy work, President Obama said Americans have to be open to each others' differing opinions, but that doesn't mean abandoning our principles or "maintaining some phony version of civility."

"That seems to be, by the way, the definition of civility offered by too many congressional Republicans right now," he said, hammering them for staying polite while they get what they want, then clicking their tongues and issuing "vague statements of disappointment" when President Trump "does something outrageous," but failing to do anything about it.

"That's not civility. That's abdicating your responsibilities," he said. 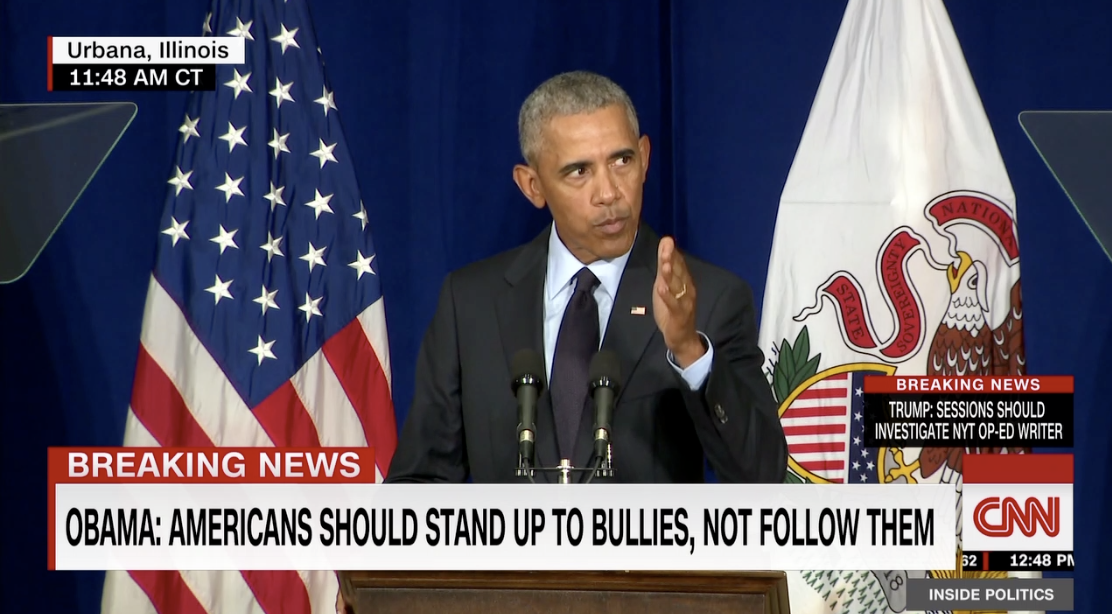 The President's attacks on these institutions, Obama said, shouldn't be partisan issues. "We are Americans. We're supposed to stand up to bullies. Not follow them," he said.

Obama then took a jab at Trump's response to the Charlottesville violence: 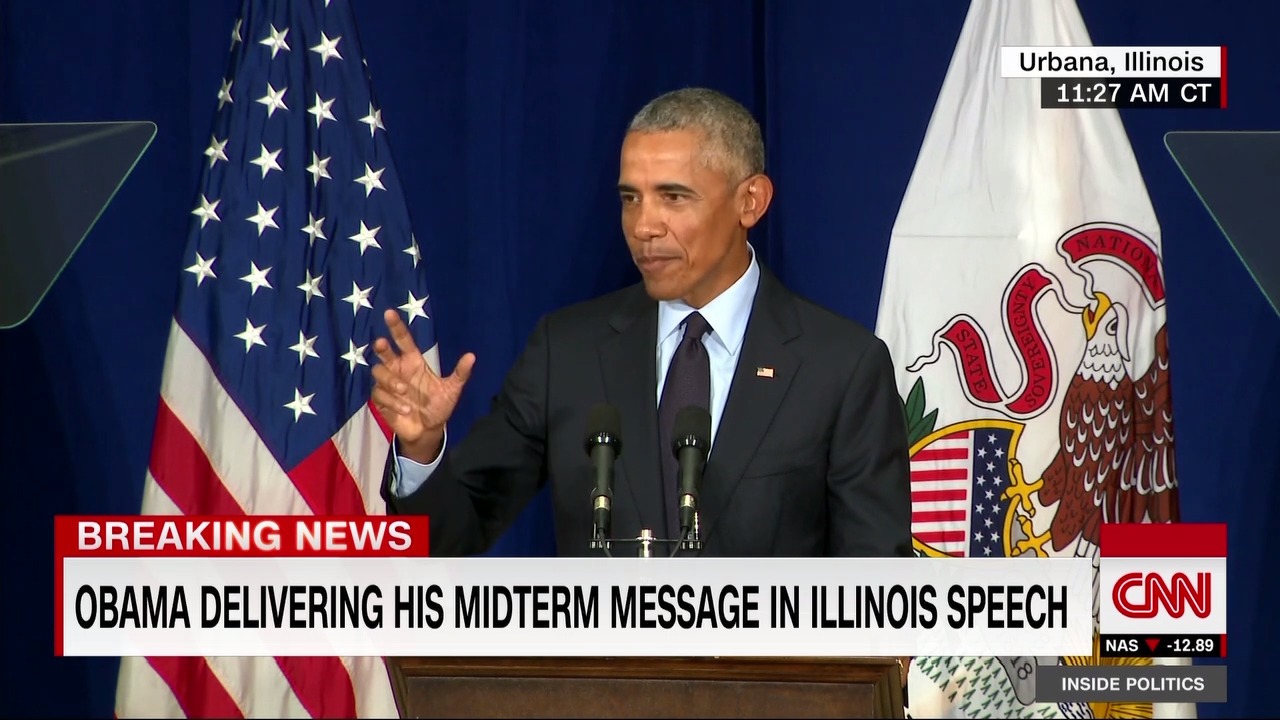 "By the time I left office, household income was near its all-time high, and the uninsured rate hit an all-time low, poverty rates were falling," Obama said. "I mention this just so when you hear how great the economy is doing right now, let's just remember when this recovery started."

He continued, "When you hear about this economic miracle that's been going on, when the job numbers come out, monthly job numbers, and suddenly Republicans are saying it's a miracle, I have to kind of remind them, actually, those job numbers are the same as they were in 2015 and 2016." 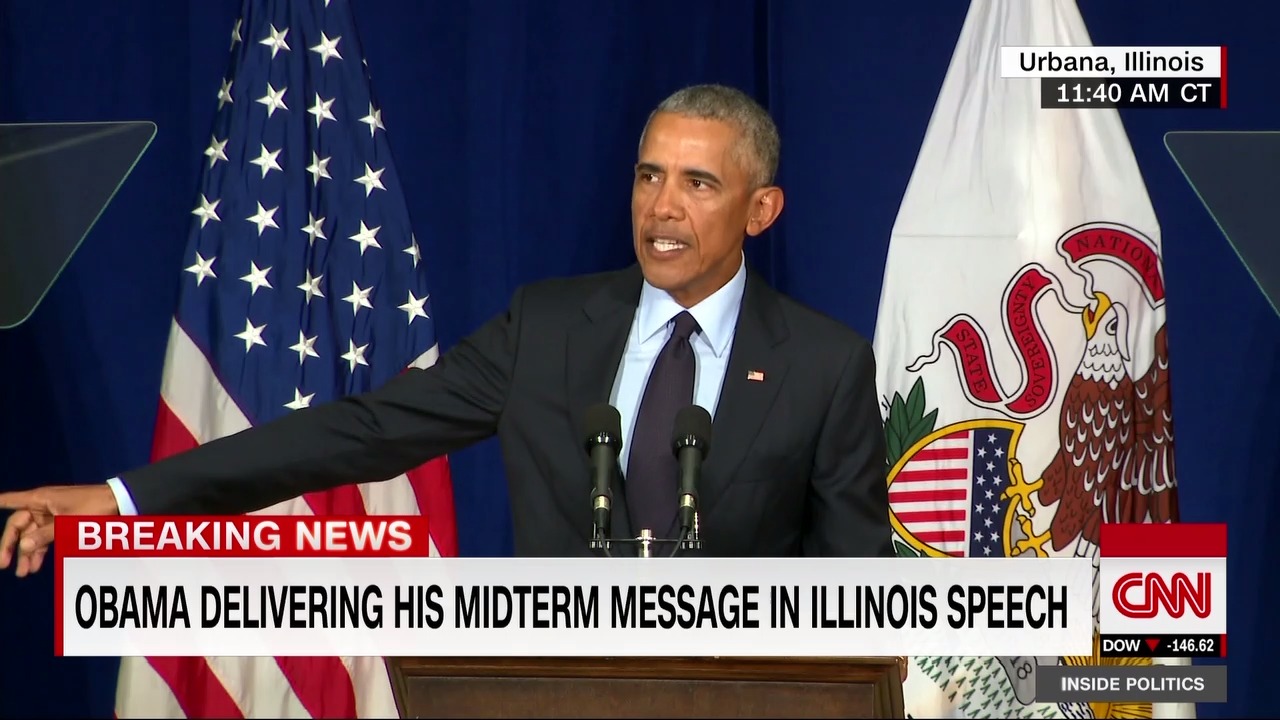 President Obama slammed the idea that there were Trump administration staffers working actively to undermine President Trump and stop him from following some of his work instincts, a theme of Bob Woodward's book as well as the anonymous op-ed that ran in the New York Times.

"The claim that everything will turn out okay because there are people inside the White House who secretly aren't following the President's orders, that is not a check," Obama said. "I'm being serious here. That's not how our democracy's supposed to work. These people aren't elected. They're not accountable."

He added, "They're not doing us a service by actively promoting 90% of the crazy stuff that's coming out of this white house, and then saying, 'Don't worry, we're preventing the other 10%.' That's not how things are supposed to work. This is not normal. These are extraordinary times. And they're dangerous times." 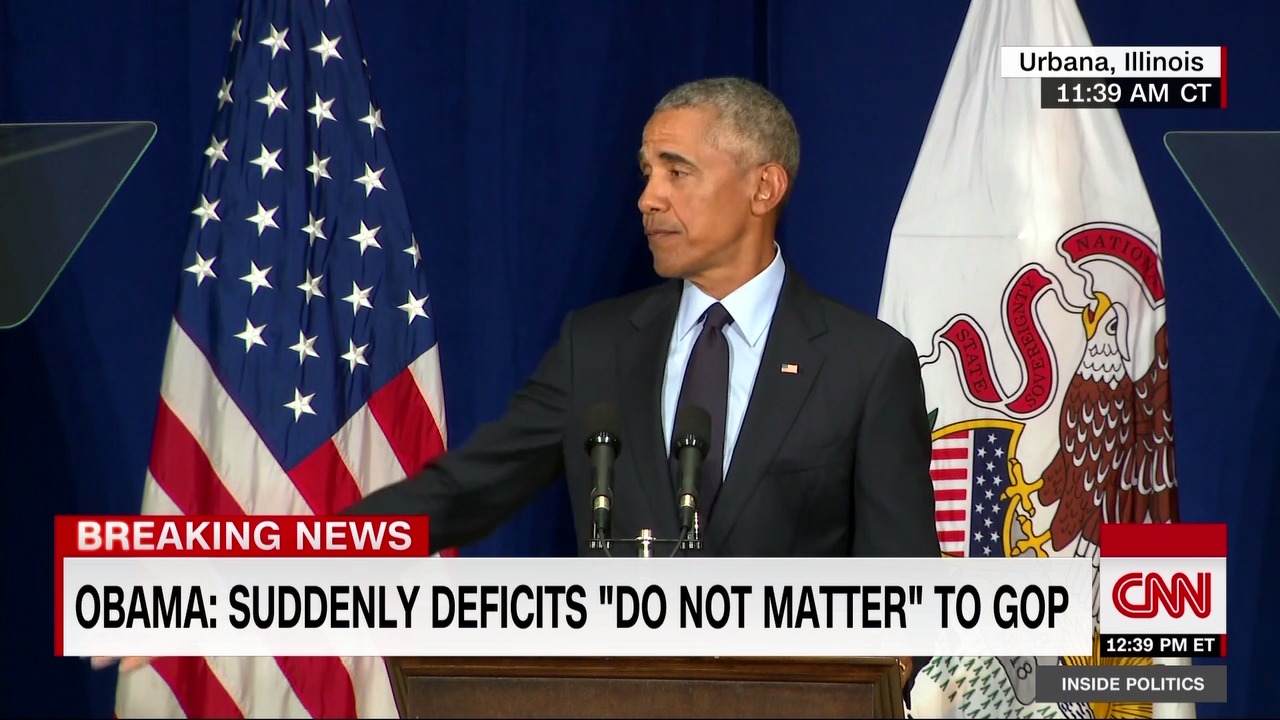 President Barack Obama, speaking at the University of Illinois, sharply criticized the state of the Republican Party and said it had become radical, not conservative.

"But over the past few decades, the politics of division and resentment and paranoia has unfortunately found a home in the Republican party," Obama said.

Over the past few years, the party, he said, has embraced conspiracy theories like the legitimacy of his birth certificate, attacked voting rights and rejected climate change.

"I don't mean to pretend I'm channelling Abraham Lincoln now, but that's not what he had in mind, I think, when he helped form the Republican party," Obama said. "It's not conservative. It sure isn't normal. It's radical.

"What happened to the Republican party?" Obama asked. 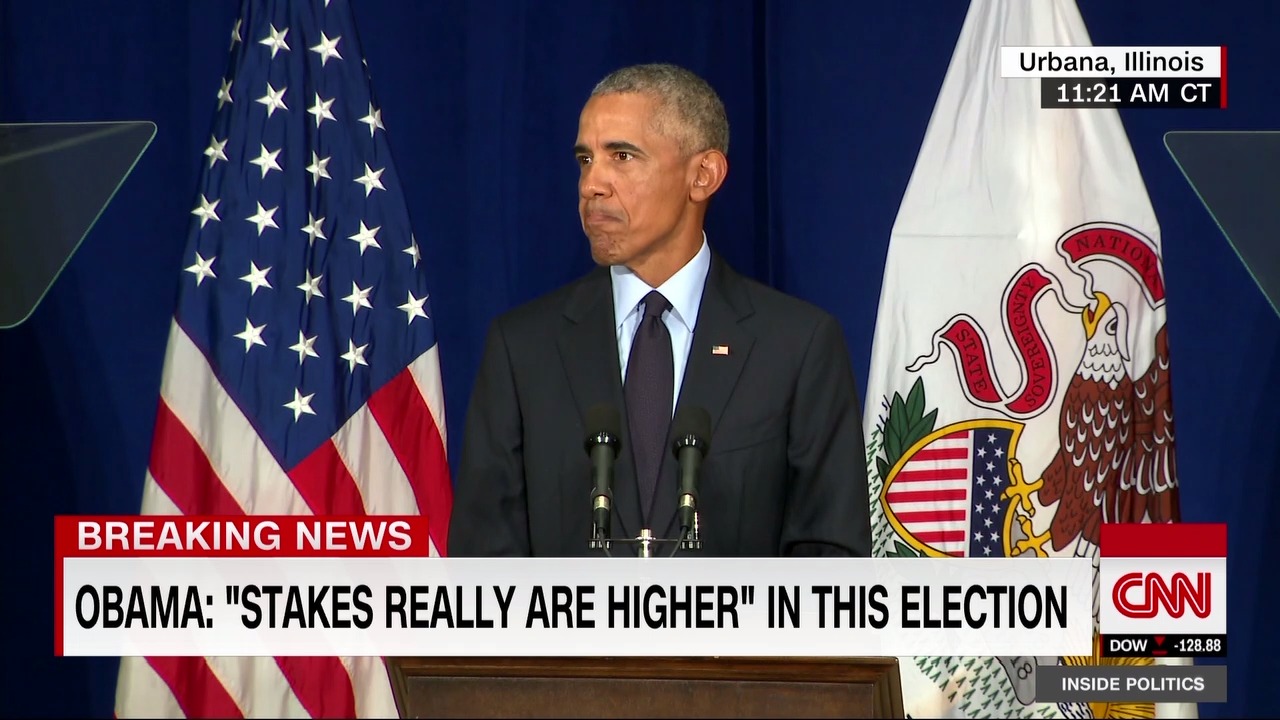 Trump, he said, is "just capitalizing on resentments that politicians have been fanning for years."

"It did not start with Donald Trump. He is a symptom, not the cause," Obama said.

"Each time we've gotten closer to those ideals, somebody somewhere has pushed back. The status quo pushes back. Sometimes the backlash comes from people who are genuinely, if wrongly, fearful of change. More often it's manufactured by the powerful and the privileged who want to keep us divided and keep us angry and keep us cynical because it helps them maintain the status quo and keep their power and keep their privilege. And you happen to be coming of age during one of those moments. It did not start with Donald Trump. He is a symptom, not the cause. He's just capitalizing on resentments that politicians have been fanning for years, a fear and anger that's rooted in our past but it's also born out of the enormous upheavals that have taken place in your brief lifetimes."