A candidate must win at least 15% of the vote in statewide or in either congressional district to be eligible to earn a delegate to the Democratic national convention in Milwaukee this July to vote for the party’s nominee for president.

New Hampshire has 24 delegates up for grabs tonight. They will be awarded proportionally to candidates who make threshold.

It takes 1,991 delegates to win the Democratic nomination on the first ballot of the convention.

During a speech in front of supporters this evening in New Hampshire, Sen. Elizabeth Warren acknowledged Sen. Amy Klobuchar, who is currently polling in third place.

"And I also want to congratulate my friend and colleague Amy Klobuchar for showing just how wrong the pundits can be when they count a woman out," Warren said to applause.

A senior Klobuchar aide says the campaign is ready to capitalize on their momentum with infrastructure expansion. In Nevada, Klobuchar already has 50 staff on the ground, per the aide.

By Saturday, the campaign says it will have staff deployed in several Super Tuesday states, as it looks to rapidly expand.

By the numbers: With 40% percent precincts reporting, Klobuchar had 19.8% of the votes. Sen. Bernie Sanders is leading with 27.6%. Warren was right behind Klobuchar with 9.5%.

Pete Buttigieg typically does better with older voters according to public polling, but there are a lot of young people in the room at his headquarters in New Hampshire tonight — more than we typically see at his rallies.

That’s a change for him: Could it signal a shift in his coalition of voters?

CNN's John King noted that Keene, a college town that was a stronghold for Bernie Sanders in 2016, is one of the places where we would expect there to be a lot of younger voters.

Buttigieg recently held a large rally in Keene that was one of his biggest in the state in the last week. Can Buttigieg be competitive there, as well as Hanover, where Dartmouth is located, are two things the campaign will be looking at.

The campaign is feeling bullish about their prospects with young voters, noting that exit polls in both Iowa and New Hampshire show him running in second place with this portion of the electorate.

Watch a report from the Buttigieg campaign headquarters:

Sen. Bernie Sanders continues to lead with 27.6% of the vote, with 40% of precincts reporting in New Hampshire. 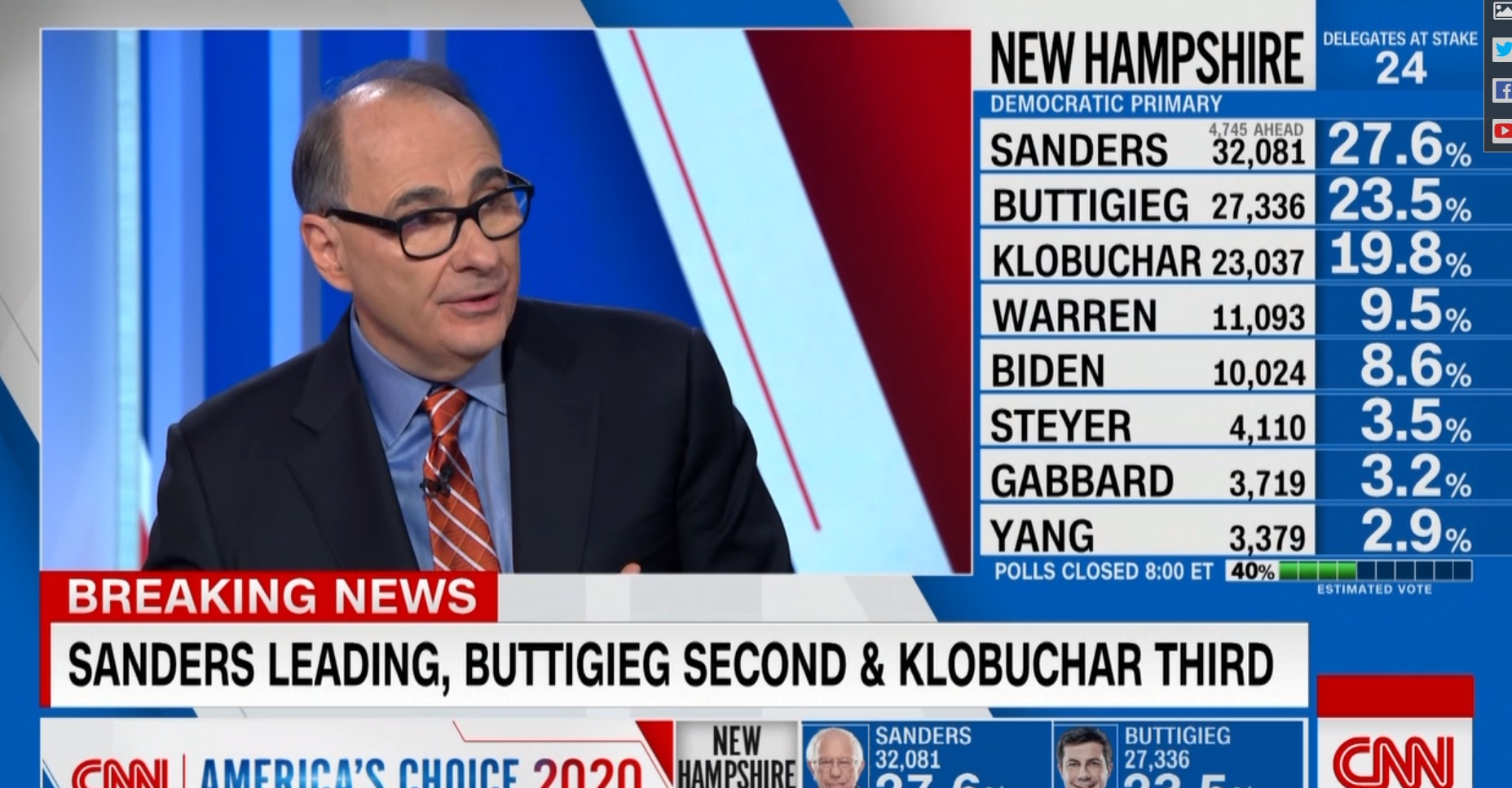 A senior aide to Amy Klobuchar said the campaign is ready to capitalize on their momentum with infrastructure expansion.

In Nevada, Klobuchar already has 50 staff on the ground, per the aide. By Saturday, the campaign says it will have staff deployed in several Super Tuesday states, as it looks to rapidly expand.

A source inside the Pete Buttigieg campaign says the early results tonight look to be pointing in a good direction for Buttigieg because...

Elizabeth Warren made it clear her campaign will continue beyond New Hampshire. “I am here to get big things done,” Warren told supporters.

Warren addressed her election night crowd in Manchester less than 30 minutes after polls closed entirely in New Hampshire, where early returns showed her in fourth place behind Amy Klobuchar. Every other candidate who has spoken thus far tonight has dropped out because of disappointing returns.

“Amy and I are the only candidates in this race who are not either billionaires or supported by Super PACs,” Warren said of she and Klobuchar.

Expectations were high for Warren’s performance in New Hampshire -- she has served as a senator in neighboring Massachusetts since 2012.

“Tonight, I am here to say thank you,” Warren said, adding her thanks for every volunteer, door knocker and volunteer, as well as her husband and “good boy,” her photogenic golden retriever Bailey.

Colorado Sen. Michael Bennet is dropping out of the presidential race. He focused his campaign on New Hampshire but got little pickup in the polls.

Speaking to supporters in Manchester, New Hampshire this evening, Sen. Elizabeth Warren called on voters to head to the polls this November to beat President Trump.