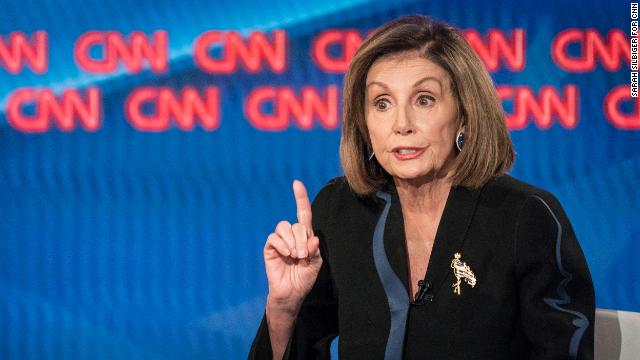 A lot of the questions were about the House impeachment inquiry into President Trump, while others focused on health care and climate change.

In case you missed it, here are some of the key lines from the town hall:

When asked tonight about how history will remember her place in the impeachment inquiry in President Trump, House Speaker Nancy Pelosi hopes the entire process will honor "the vision of our founders, what they had in mind for establishing a democracy."

"I have to admit that today was quite historic. It was taking us across a threshold on this that we just had no choice. I do hope that it would be remembered in a way that honors the vision of our founders, what they had in mind for establishing a democracy," Pelosi said during the CNN town hall.

Speaker of the House Nancy Pelosi considers health care the crucial issue facing the US in the 2020 presidential election.

Pelosi shared this sentiment tonight during the town hall in Washington D.C. hosted by Jake Tapper.

Tapper specifically referenced the Patient Protection and Affordable Care Act, colloquially known as Obamacare, and how, in 2016, Pelosi had said she would "go home" if Hillary Clinton had won because Obamacare "would have been safe."

"If a Democrat wins in 2020, would you feel free to go home because Obamacare would be protected? Or not?" Tapper asked.

"Well, I'll see. I'm not on a timetable. I'm on a mission," Pelosi responded, to applause.

House Speaker Nancy Pelosi said at a CNN town hall that Democrats are working “collectively” on determining what will go into the articles of impeachment.

Asked by CNN's Jake Tapper about whether obstruction of justice charges from special counsel Robert Mueller's report will be included, Pelosi said, “We’re operating collectively. It’s not going to be — somebody puts something on the table. We have our own, should we say, communication with each other.”

She declined to go further.

“I’m not going to answer one charge — we’re not writing the articles of impeachment here tonight," Pelosi said.

Despite a day filled with major impeachment developments on Capitol Hill, House Speaker Nancy Pelosi did her best tonight to direct questions toward other issues facing the country, such as health care.

"Can we not have any more questions about impeachment?" Pelosi said, to laughs. "I don't mind questions, but to ask me questions through the prism of the White House is like, what?"

Earlier today: Pelosi announced that the House was proceeding with articles of impeachment against President Trump, a historic step that is likely to make Trump the third President in US history to be impeached.

"Today, I am asking our chairmen to proceed with articles of impeachment," Pelosi said in a brief address outside her office this morning, the same location where she announced Democrats would open the impeachment inquiry two months ago. "The President leaves us no choice but to act because he is trying to corrupt once again the election for his own benefit."

House Speaker Nancy Pelosi said lawmakers need to focus on working together for the country.

She said Congress must focus on reducing gun violence, good education and the disparity income in America.

Pelosi went on to criticize President Trump for his divisiveness.

"It's really important to note that the country was divided. The President had been a very divisive force. He's not the only reason it's divided," she said.

Pelosi added: "But again, he has fanned the flame. But some of that division was there before President Trump, but he has made it much, much worse. So it isn't — that's why I don't want to talk about him."

"They should be testifying because they have been asked to testify by Congress. It isn't a deal. It's about a system of checks and balances," Pelosi said tonight during the town hall.

More on the lack of testimonies: House Intelligence Chairman Adam Schiff has repeatedly called on Mulvaney and others to comply with congressional subpoenas and testify before Congress in the impeachment inquiry.

Speaker of the House Nancy Pelosi was asked why she's supporting impeachment now when she didn't in the past.

She said she opposed impeaching President George W. Bush despite repeated calls to remove him. Pelosi then moved on to President Bill Clinton, who she said was impeached because of "personal indiscretion and misrepresenting about it."

"Some of these same people are saying, oh, this doesn't rise to impeachment. Right there, impeaching Bill Clinton for being stupid in terms of something like that. I mean, I love him, I think he was a great president, but being stupid in terms of that, what would somebody do, not to embarrass their family, but in any event, so they did Bill Clinton, now they want me to do George Bush, I didn't want it to be a way of life in our country," she said.

"I don't have time to keep track of Rudy Giuliani, I just don't. But I do think it is further indication of the arrogance of it all, that every authority has said there is no truth to the rumor that the Ukrainians were instrumental in interfering in our election," Pelosi said tonight.

Pelosi went on to criticize Russian President Vladimir Putin: "Putin makes a joke of it. He says, 'Oh, they're blaming it on Ukraine, they took it off of me.' But all roads lead to Putin. This is about Putin, right from Putin, in Russia, in Moscow, Putin's desk, the disruption of our elections but not only ours. They want to undermine democracy all around the world. In Africa, in Europe, in the United States, to undermine democracy."

Some more context on Giuliani and Ukraine: Gordon Sondland, the US ambassador to the European Union, testified that Giuliani was essentially running point for Trump on Ukraine matters.

Giuliani was trying to arrange a quid pro quo of a White House meeting for Ukraine's new president in exchange for his help investigating interference in the 2016 elections, former Vice President Joe Biden, and his son Hunter Biden, who served on the board of a Ukrainian energy company known as Burisma. There is no evidence of wrongdoing by either Joe or Hunter Biden.