Ohio Rep. Tim Ryan on Sunday defended previous comments he made casting worrying about climate change as a “luxury,” calling the issue a “top priority” and saying that combating climate change should be viewed as a “jobs program.”

“I’m talking about the auto worker that just lost their job and can’t pay their mortgage, and they have to leave their kids to go work in another factory, and they’re not sure what their future looks like,” he said during a CNN town hall of his previous comments on the “Pod Save America” podcast. “And my argument is, we’ve got to understand that they don’t have the bandwidth to talk about climate because they’re worried about putting food on the table for their kids and they’re worried about where their next paycheck’s going to come from.”

Ryan said that he’d attempt to reach those people by viewing climate change as a “jobs program.”

“Let’s talk about it in the context of jobs. Solar’s growing at 30% a year; wind’s growing at 20% a year. We’re going to make 30 million electric vehicles in the next 10 years. I want those made in the United States, and let’s steer the investment to the communities that have lost: communities of color, old coal, old auto, old steel, old rubber,” he said. 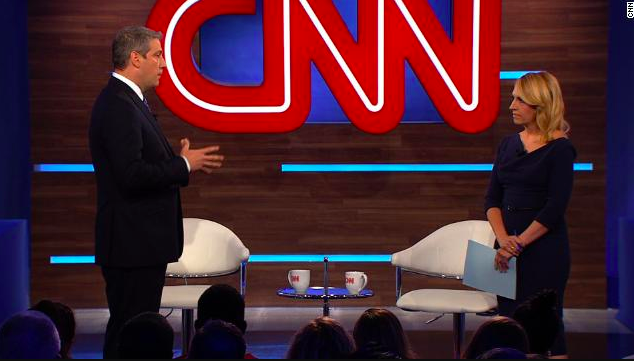 Ohio Rep. Tim Ryan pointed to his personal relationships with laid-off General Motors workers in his Youngstown-based district as he argued Sunday he is the Democratic presidential contender most closely in touch with economic concerns.

“In many ways I believe I’m the only one in this campaign who deeply, deeply, deeply understands what those workers are going through,” he said in a CNN town hall. “When these plants close, I know who’s working in them. They’re my family. They’re my friends.”

“When I’m president, they’re not going to be forgotten anymore,” Ryan said. “No one’s going to have to explain to me why I’m there or who I’m there for, OK?”

He criticized US tax and trade policies over the last 40 years, saying those policies have given countries incentives to move labor overseas. He said if he’s elected, he would “build a team and let’s go and win the future.” 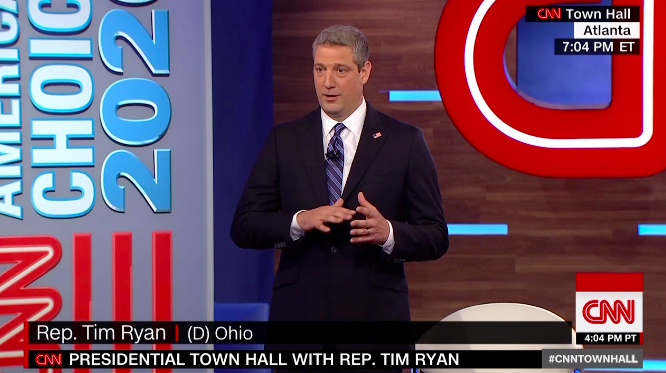 In the aftermath of Friday’s mass shooting in Virginia, Ohio Rep. Tim Ryan called out the National Rifle Association, telling it to “get off the dime and help the American people” come to a consensus on new gun laws.

Ryan said he didn’t know if any specific new restrictions could have “prevented” the Virginia shootings, but did say he believed it "could have been less severe if we had gun reform that didn’t allow for those extended magazines and silencers.”

That those weapons are available, Ryan said, is “ridiculous” and needed to be addressed by Congress.

“That someone can have a silencer or can have extended magazine in the United States today -- those need to be banned in the United States,” he said. “That should not be a partisan issue and the NRA needs to get off the dime and help the American people make that happen.” 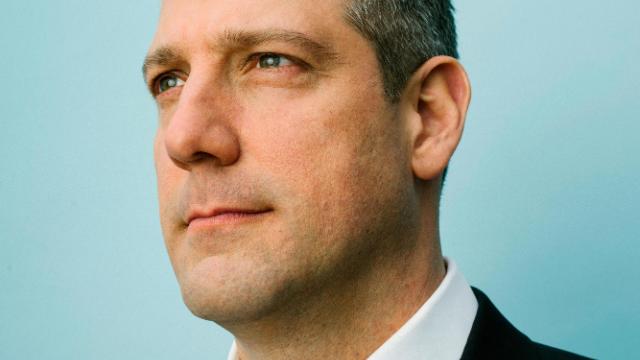 Democratic presidential hopeful Tim Ryan chatted with CNN shortly before taking the stage. We asked the Ohio congressman eight, simple questions so voters can get to know him better.

Ryan: "People don't care what you know, they want to know that you care."

Ryan: "'The Big Lebowski, I think. Cause it never gets old."

Ryan: "I am the only candidate who understands what's happening in working class America. I've grown up there. I live in the epicenter of the industrialization — I have my entire life and that's what differentiates me from everyone else."

CNN: What does your presidency have to offer Republican voters?

Ryan: "My presidency will offer Republican voters sanity, consistency. They'll know where I stand whether they agree with me or not and I will always treat them with respect. I am not running to be the head of one tribe or another. I am running to be president of the United States."

Ohio Rep. Ryan announced in April he too would run for president, pitching his candidacy in part based on his background in Ohio.

Ryan has broken with some of the field by warning about the popularity of "socialism," and, similarly to Massachusetts Rep. Seth Moulton, grew his profile in Congress with an effort to oust House Speaker Nancy Pelosi. Both Moulton and Ryan ultimately voted for Pelosi to be leader.

He's also been critical of Joe Biden, calling the former vice president's comments on China "stunningly out of touch." (Biden, who's running for president, recently said China is "not competition for us.")

On President Trump, Ryan said he does not support beginning the impeachment process, even though he argued that special counsel Robert Mueller's report shows the President committed obstruction of justice.

Read Ryan's own words on why he's running to be president here. 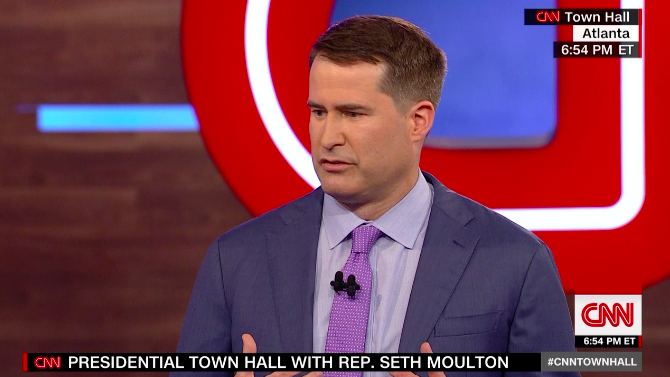 Moulton asked the question himself.

At the end of his town hall, the Massachusetts congressman tried to explain why he is running or, as he put it, “Why am I here? Why am I doing this?”

“Donald Trump doesn’t want that, he wants to keep us divided,” Moulton continued, before talking about the “diverse coalition of Americans” he’s hoping to unite.

“To win,” he said, “we need to bring together a diverse coalition of Americans. Everybody in our party, along with independents (and) even a few disaffected Republicans.”

Democratic presidential candidate Rep. Seth Moulton said his skepticism over "Medicare for all” is rooted in his experience with the Department of Veterans Affairs, which uses a form of single-payer health care.

“I’ve seen the good, the bad and the ugly,” Moulton, an Iraq war vet, said of his time on a health plan through the VA.

He praised the system for its ability to negotiate prescription drugs prices, bringing down the costs, but also talked about veterans on waiting lists for care.

Moulton said he preferred “what President Obama planned (in the run-up to the passage of the Affordable Care Act), which is that we should have a public option like Medicare for all” -- arguing that Americans should be able to buy in to a new version of today’s Medicare program.

The Medicare for all bills in the House and Senate would not expand Medicare as most Americans know it, but would create a new single-payer system that would effectively wipe out all private insurance.

Moulton said a public option that preserves the private insurance industry, while competing against it, is the best path forward “because competition is good for the system. It keeps prices down, it improves outcomes and I think people should have choices for their health care.”

“If this country wasn’t racist, Stacey Abrams would be governor,” the 2020 Democratic presidential contender said in a CNN town hall in Atlanta. “Because people of color are being systemically denied the most basic right in a democracy, which is the right to vote.”

Moulton also called for changes to the criminal justice system, including the legalization of marijuana.

“I smoked weed when I was younger. I didn’t get caught, but if I had, I would’ve been fine. Because I’m a white guy,” he said.

He contrasted himself to a man in Louisiana who Moulton said was sentenced to life in prison last year for selling $20 of marijuana.

“Let’s not ignore the fact that when the man in the Oval Office is a racist -- and yes, I did just say that, I don’t think that’s inappropriate … it’s going to affect everyone in this country,” he said.

Moulton said if he is elected, he would ensure that there are “not two sets of laws -- one for black, one for white; one for rich, one for poor -- but that everyone in America is subject to the same laws. The President talks about law and order -- that’s real law and order.”

Massachusetts Rep. Seth Moulton said he hopes publicly sharing his own experience battling post-traumatic stress disorder “is an example to others -- that others will be encouraged to share their stories, too.”

The Democratic presidential contender who recently revealed that he’d suffered from PTS said he hadn’t made that diagnosis public because he was “afraid of the political liabilities; even the personal liabilities.” He said his own family didn’t know he’d been seeing a therapist.

In a CNN town hall, Moulton also detailed a series of mental health-related proposals. They included:

In an interview that aired on Sunday with CNN's Jake Tapper, Moulton, who served four tours with the Marines in Iraq, opened up about his own experience with post-traumatic stress, revealing how he still thinks about a painful decision to leave a wounded Iraqi boy behind.

"There was a time when I got back from the war when I couldn't get through a day without thinking about that 5-year-old boy, leaving him in the middle of the road," Moulton told Tapper.

"I'll remember his face until the day that I die."