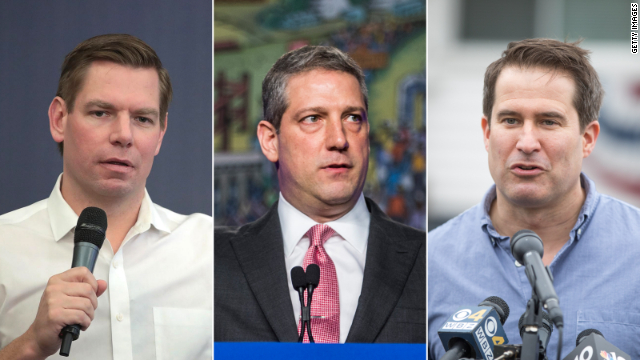 On gun control: “Weapons of war have no place on our streets or in our schools,” the Massachusetts congressman and Iraq War veteran said. “And whether it’s declaring a national emergency or pursuing executive action, I will do whatever I can to actually make progress on this gun violence plague in America.”

On racism in the US: “If this country wasn’t racist, Stacey Abrams would be governor. Because people of color are being systemically denied the most basic right in a democracy, which is the right to vote.”

On why he's running for president: “I think this is the most important election of our lifetimes. It’s about who we are as a country, it’s about our values, it’s about what kind of future we’re going to build. It’s about whether we can get united around a common mission not to make America great again, looking backwards to some mythical version of the past that never really existed, but whether we can make America better than it’s ever been before.”

On the Virginia shooting and gun control in the US: “That someone can have a silencer or can have extended magazine in the United States today -- those need to be banned in the United States,” he said. “That should not be a partisan issue and the NRA needs to get off the dime and help the American people make that happen.”

On his relationship to laid-off autoworkers: “In many ways I believe I’m the only one in this campaign who deeply, deeply, deeply understands what those workers are going through. When these plants close, I know who’s working in them. They’re my family. They’re my friends.”

On impeachment proceedings against President Trump: “We (in Congress) oversee Article II of the Constitution, which is the president -- not the king. And when you think that the President has committed comes -- and I’ve read the Mueller report and think he obstructed (justice) on multiple occasions -- we have a responsibility.”

On health care: "I think engrained in our DNA is choice. People want to have choices, but they also expect that the government should offer an affordable plan if their employer is providing it."

On white nationalism: “I will denounce anti-Semitism even if an anti-semite praises me. That sounds like something easy to ask, but we can’t even get that from the President of the United States. Leadership starts at the top.” 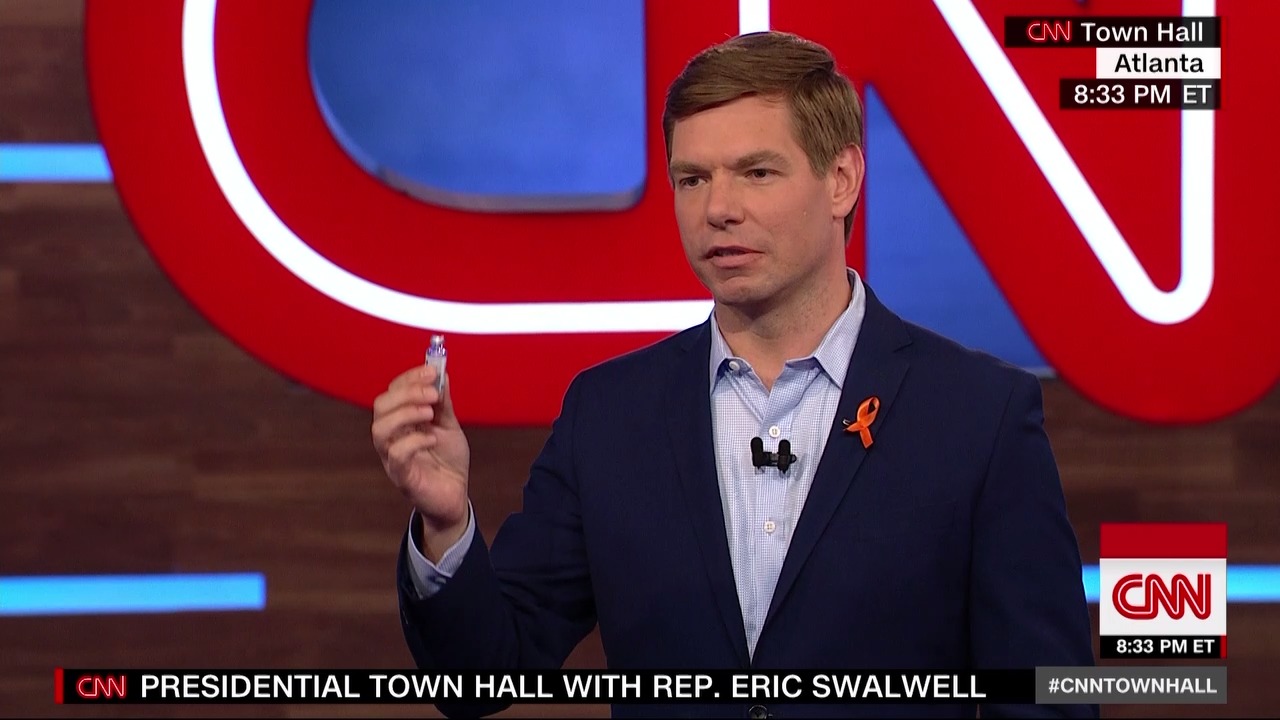 California Rep. Eric Swalwell has been carrying a vial of insulin with him for three months.

Swalwell pulled the tiny container from his pocket and said he got the vial from a man in California.

He explained the man told him, "I can't afford to give this to you. It costs about $15 a day but unless you carry it and know how much it means to me, you're not going to be able to fight for people like me."

Swalwell added: "I think about that every single day."

He said the costs of prescriptions drugs for Medicare should be competitive and negotiated. Swalwell added that the US should also invest in public research universities to find cures.

"It's really important to me. I want to be the cures candidate. I know at the end of the day, that's a way to bring down what you spend when you go to CVS and you're at the checkout counter," Swalwell said. 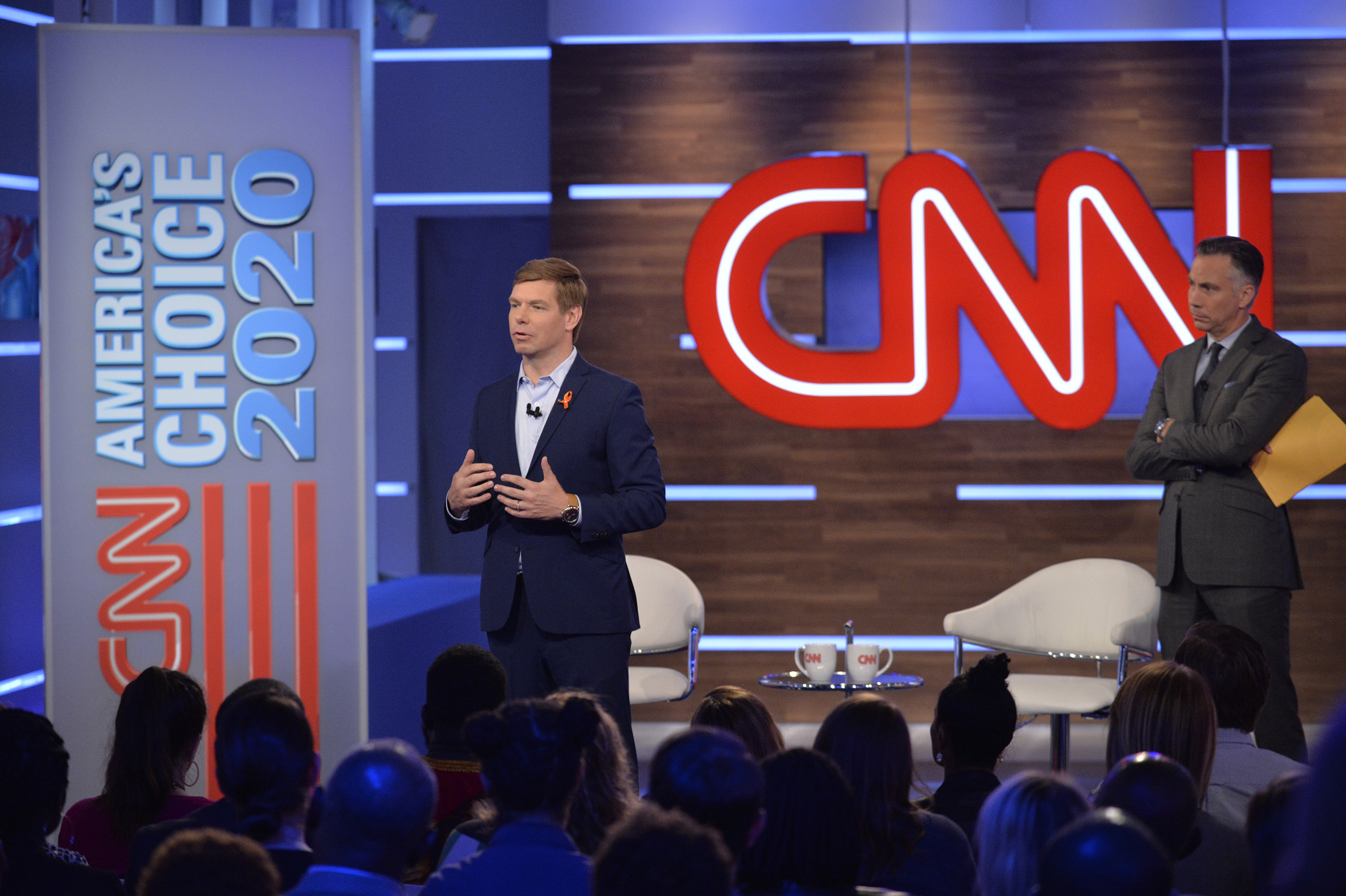 “I will put at the DOJ a division to counter the extreme violent white nationalism in America. Put FBI agents and prosecutors on the task,” he said.

Swalwell also criticized President Trump for his refusal to more aggressively speak out against the rise of those crimes.

“I will denounce Anti-Semitism even if an Anti-semite praises me,” Swalwell said. “That sounds like something easy to ask, but we can’t even get that from the President of the United States. Leadership starts at the top.”

Democratic president candidate Eric Swalwell knows all too well the struggle to pay off student loans.

"The way I see it is that the lessons and memories of college should last a lifetime," he said at CNN's town hall. "The debt should not."

But that's the real for too many people in America, including me. I'm paying off just under $100,000 in student loan debt. My wife still married me. She knew before. Don't feel sorry for her. But every month, every month I click that link and I know 40 million other Americans do, too. And it's deferring the dreams of our generation," he said.

Swalwell, who supports free community college, said he has a plan to make college debt free.

He's proposing to bring down the interest loan to zero on student loans and wants "a college bargain."

"If you do work study all four years through, you learn and you earn, and then you come out and you take your first job and do volunteer service for communities that need it, it's debt-free education. College should work for you if you work for college in America," Swalwell said.

The California congressman said he wants to return voting rights to most people after they’ve served their sentences, but drew a line at those presently incarcerated.

“No, I do not believe that the Boston marathon bomber or the last person I prosecuted, who shot a 17-year-old a week before he was to graduate” should be able to vote right now, Swalwell said.

Asked about his position at a CNN town hall in April, Sanders argued that taking away the right to vote -- “even for terrible people” like the Boston bomber -- from anyone fits into a larger effort by Republicans to restrict the franchise.

“This is a democracy and we have got to expand that democracy,” Sanders said then, “and I believe every single person does have the right to vote.”

California Rep. Eric Swalwell said he supports Medicare for All, but thinks people should be allowed to choose private insurance.

He went on to say that he agrees with 90% of the bill, but doesn't support the part that excludes private insurance.

"I think engrained in our DNA is choice. People want to have choices, but they also expect that the government should offer an affordable plan if their employer is providing it," Swalwell.

Eric Swalwell on Sunday said he would model his plan for an assault weapons ban and buyback on what was passed in Australia in the 1990s and, more recently, in New Zealand.

And yes, he said, that means that if a person is caught with one of those banned weapons, they could face jail time.

Asked how that message might land politically with people in the South and Midwest, Swalwell had this message:

“I tell them keep your pistols, keep your rifles, keep your shotguns, but we can ban and buy back the most dangerous weapons. There is a new gun safety majority in America and it’s time we lean in and negotiate up.”

Swalwell also discussed his frustration with lawmakers' inaction in the face of a steady stream of mass shootings.

“When I went to Congress, Sandy Hook happened. And there was nothing. Then Charleston: Nothing. San Bernardino: Nothing,” he said, before ticking off one mass shooting after another: “Orlando, Las Vegas, Sutherland Springs: Nothing, nothing, nothing. It’s this ritual. Grief, anger, moments of silence is an alibi for doing nothing.” 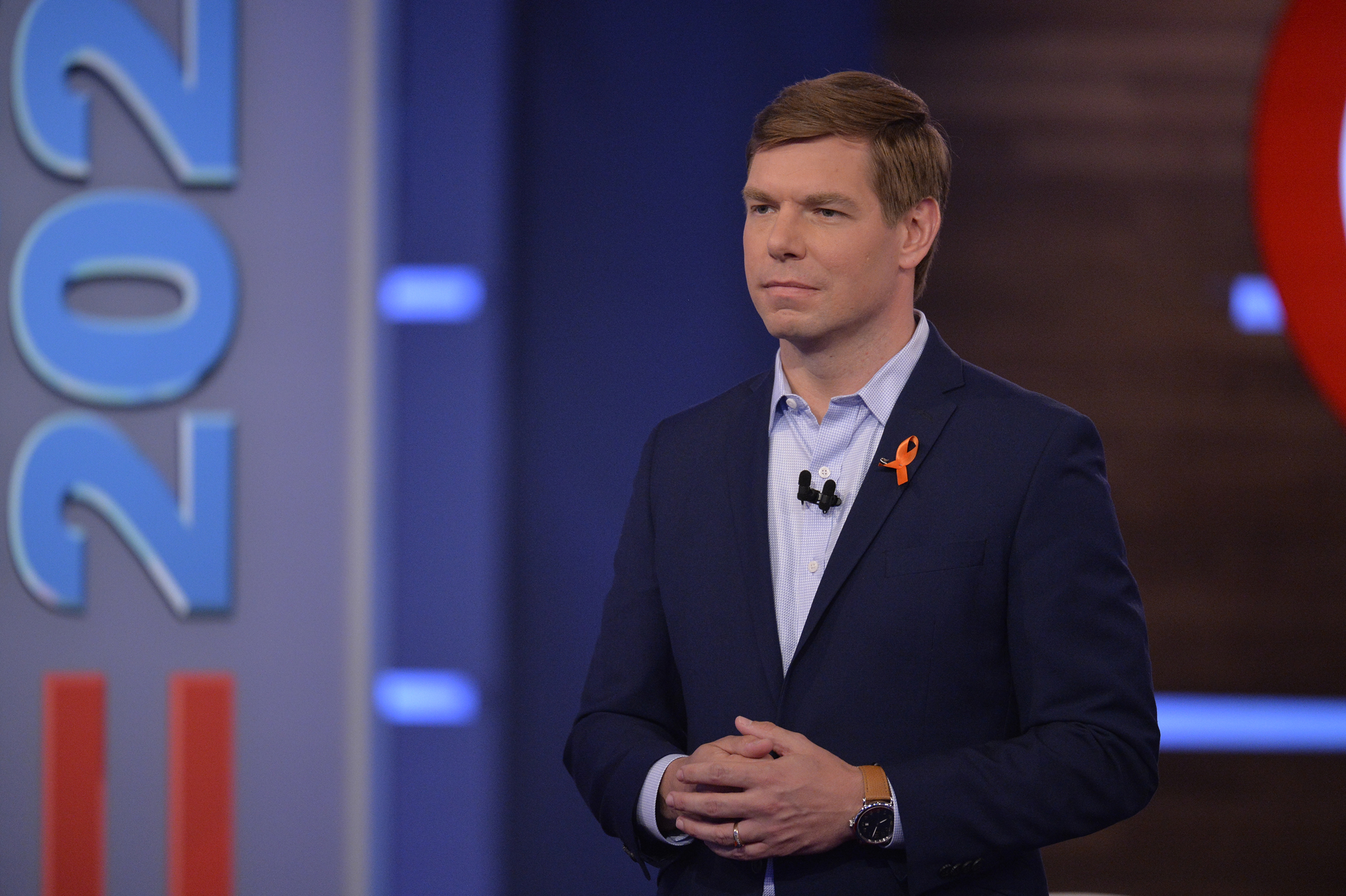 Democratic presidential hopeful Eric Swalwell said in first 100 days in office he plans fight back against Russia interfering the US elections and restore trust from world leaders.

The California Democrat laid out his plan to win back America's trust and fight Russia.

Here's what he plans to do:

California Rep. Eric Swalwell stopped short of calling for President Donald Trump’s impeachment, saying in a CNN town hall Sunday night that “I want us to get it right, because we only get one shot.”

“If that’s where we’re headed, I want to be backed into it, showing that we’ve exhausted every other remedy and have the American people with us. I think that’s where we are right now,” the 2020 Democratic presidential contender said.

However, Swalwell said that House Democrats should first “make an example” out of Trump’s Treasury Secretary Steven Mnuchin and Attorney General William Barr.

“I think you have to make an example out of Mnuchin and Barr first, though. You can’t let them off the hook,” he said.