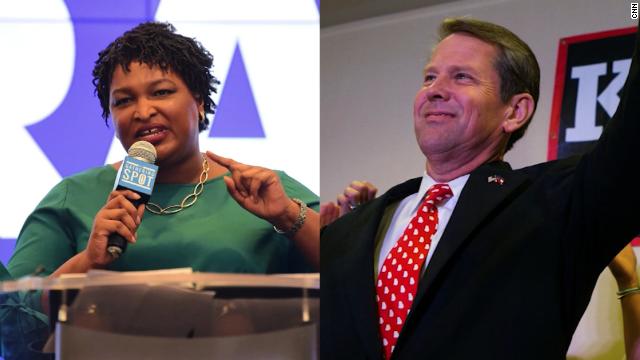 A federal judge knocked down a motion from Georgia's Republican gubernatorial nominee Brian Kemp against a previous temporary restraining order that changes the way election officials handle absentee ballots in the state.

US District Court Judge Leigh Martin May rejected Kemp’s arguments point by point and concluded the "injunction ensures that absentee voters who are unable to vote in person and whose applications or ballots are rejected based on a signature mismatch will still have the opportunity to have their votes counted in the upcoming election.”

Kemp, Georgia's secretary of state, also filed an emergency motion Tuesday with the 11th Circuit Court of Appeals. He argued, “the district court issued a preliminary injunction that requires 159 Georgia counties to make immediate, significant changes to those longstanding procedures right in the middle of an ongoing statewide general election,” which he said threatens to “disrupt the orderly administration of elections.”

Last week, May, the judge, ordered that Georgia election officials stop rejecting absentee ballots with voters' signatures that do not appear to match those on record.

Why this matters: Kemp is the Republican running for governor against Democratic former state Rep. Stacey Abrams. In a recent debate, Abrams accused Kemp, who has been the secretary of state for eight years, of creating “an atmosphere of fear around the right to vote in the state of Georgia.”

In total, election officials in Georgia have rejected 157 absentee ballots for signature mismatch issues, according to state data analyzed by CNN last Wednesday. More than 881,000 absentee ballots have been cast.

Gwinnett County has also faced criticism from voting rights activists who say the rejections disproportionately affect minority voters. The county has rejected more than 600 absentee ballots as of last Wednesday, though only a small fraction of those were tossed for signature mismatches. Others were rejected for missing birthdates, address discrepancies and other reasons. 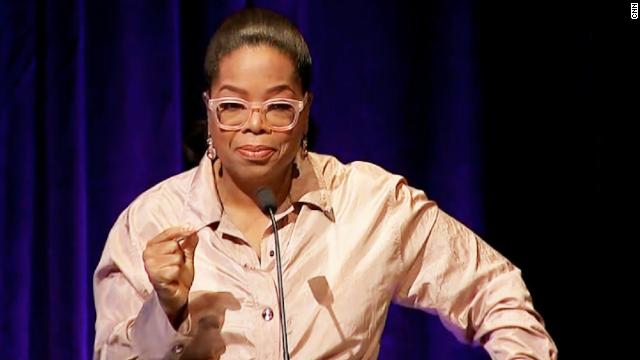 Winfrey will participate in two town hall events with Abrams -- one in Marietta and one in Decatur -- on Thursday to aide her campaign in what has become a highly competitive, closely watched race.

"Oprah Winfrey has inspired so many of us through the years with her unparalleled ability to form real connections and strengthen the bonds of family and community," Abrams said in a statement Wednesday. "I am honored to have Oprah join me for uplifting and honest conversations with voters about the clear choice before us in this election and the boundless potential of Georgians."

As President Trump kicks off an 11-rally tour in the final six days of the midterm election campaign, he is focused on expanding Republican control of the Senate — without jeopardizing it.

He will pay two visits to Florida, Missouri and Indiana, all home of key Senate races, in addition to stops in Montana, West Virginia and Tennessee. (He also visits Ohio and Georgia.)

But two states noticeably absent from his itinerary: Arizona and Nevada, which are among the most competitive races and the best chance for Democrats to pick up GOP-held Senate seats (as our new CNN polls today illustrate).

Here's why: Two Republican officials involved in shaping the President's political travel tell CNN that Republicans in both Arizona and Nevada asked the White House to steer clear of those states in his final swing. Both states were on an early list of places Trump hoped to hit, officials say, but were taken off the final schedule because a presidential visit wasn't seen as helpful to Rep. Martha McSally in Arizona and Sen. Dean Heller in Nevada.

"He's been very helpful rallying his base, but he's not helpful there now," one Republican official directly involved in the races said. "We asked him to go elsewhere."

The President visited Arizona and Nevada earlier this month. But in the final stretch, he is largely focusing on Trump-friendly red states, rather than battlegrounds like Nevada and Arizona.

Trump's closing message on immigration — particularly his call to end birthright citizenship — is seen by Republicans in both states as detrimental to their message, officials said, with the prospect of rallying Independents and Democrats.

Election Day is less than one week away, and voters will cast their ballots in a slew of races.

Here's which seats are up: 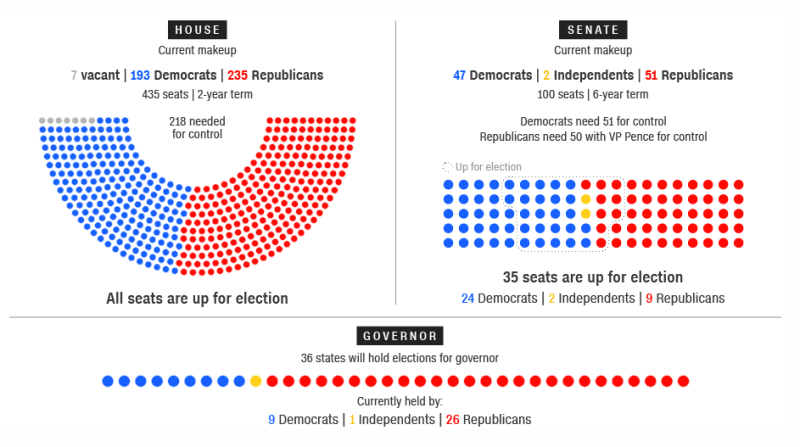 With exactly one week until Election Day, at least 20 million people across the country have already cast their ballots for the midterms as of Wednesday morning.

CNN is partnering with Catalist, a data company that works with Democrats and others, to compile counts of ballots cast before Election Day, either early in-person or by mail.

Votes coming in from seven critical states show that more women than men have voted. 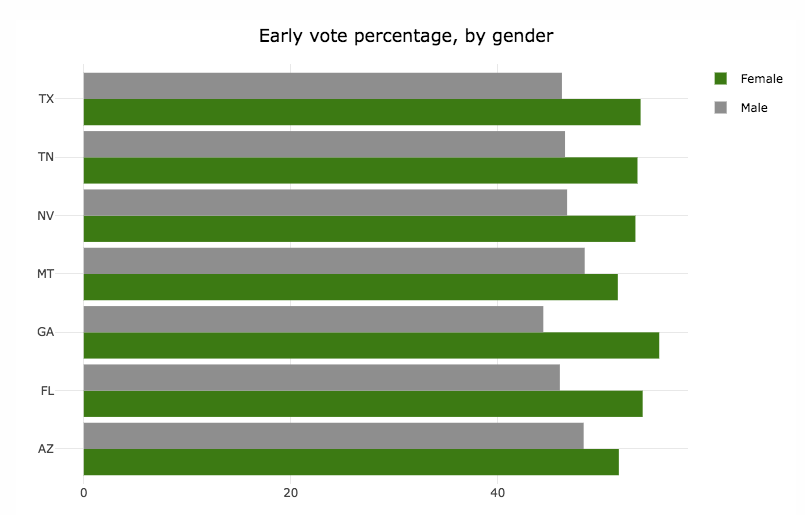 The early vote is also predominantly older in the seven states — although a higher percentage of early voters are often older. 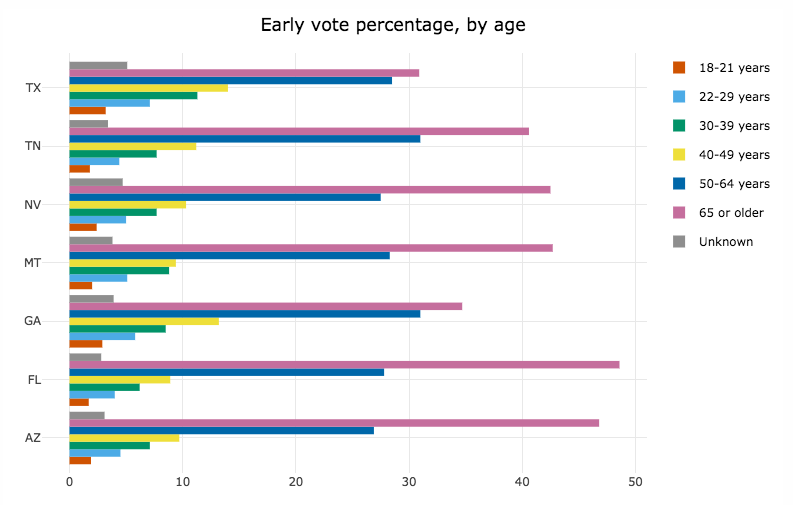 This election is essentially a referendum on President Trump.

Depending on what voters decide to do with Congress, Trump may approach the last two years of his current term with the wind at his back or headwinds to his face.

As of today, at least 20,067,826 votes have been cast early or by mail nationwide, according to data collected by Catalist.

CNN is partnering with Catalist, a data company that works with Democrats and others, to compile counts of ballots cast before Election Day, either early in-person or by-mail.

So what does that mean? Read up on what early voting numbers do — and don't — tell us here. 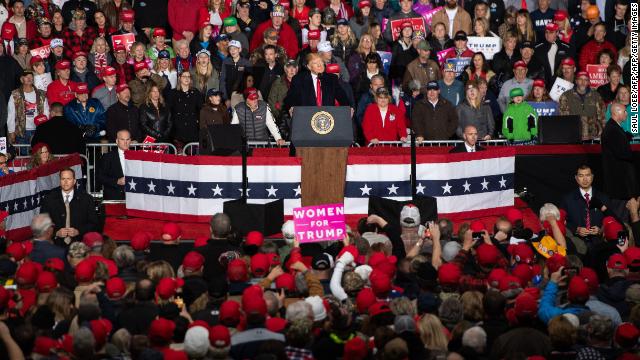 President Trump is holding 11 rallies across eight states in the final days before the midterm election, the White House said.

The President wanted to commit to an “unprecedented amount of political travel” and “eclipse his predecessors,” according to person familiar with his thinking.

Here's where Trump is rallying: