Cartwright beat Bognet, a former political consultant, by only about three and a half percentage points in 2020 and was considered an underdog to defend the seat again this year. But his winning streak on increasingly red turf remains intact, even as his vote-share has trended down over the years.

With the balance of the House and Senate coming down to a handful of key states, the race for control is getting tighter.

Here are some of the key headlines from the midterms as results continue to come in:

Fetterman, the Democratic nominee, thanked supporters and those who voted for him after CNN projected he would win, saying, "I never expected that we were going to turn these red counties blue. But we did what we needed to do."

Voters from union households in Ohio favored GOP Senate candidate J.D. Vance over his Democratic rival, Rep. Tim Ryan, which helped the Republican clinch the open seat, according to the early results of the Ohio exit poll conducted for CNN and other news networks by Edison Research.

Whitmer defeated Republican challenger Tudor Dixon in one of the nation’s most important political battleground states, CNN projects. Whitmer won a second term after a campaign that focused largely on her support for abortion rights in the wake of the Supreme Court’s reversal of Roe v. Wade.

Abortion on the ballot

Here's a look at how Michigan's voter turnout for the measure stacks up: 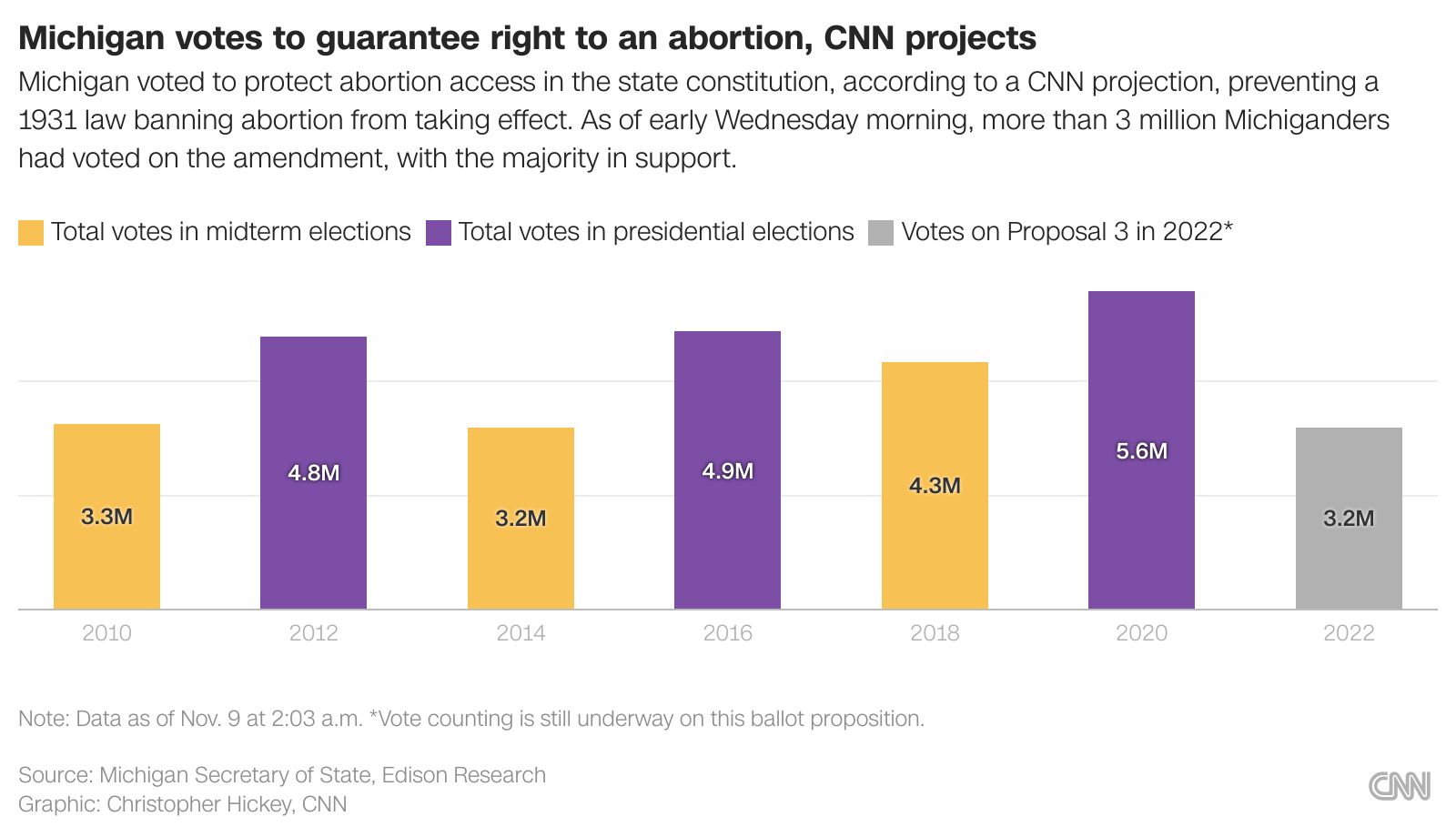 Pennsylvania voters who most valued “honesty and integrity” in their Senate candidate favored Democrat John Fetterman over Republican Mehmet Oz, according to the early results of the Pennsylvania exit poll conducted for CNN and other news networks by Edison Research.

Most voters, about 53%, said they disapproved of President Joe Biden’s job performance. But roughly 14% of those who disapproved of Biden cast their ballots for Fetterman, as did nearly all of those who approved of the president. A slim majority of voters in the state said that Biden was not a factor in their vote, with most also saying former President Donald Trump did not play a role.

Voters were close to evenly split on whether or not Oz’s views were too extreme, while about 53% said Fetterman’s views were not.

Voters in Pennsylvania were closely split over whether Fetterman’s health was good enough to represent the state effectively. Fetterman, Pennsylvania’s lieutenant governor, suffered a near-fatal stroke days before the May Democratic primary.

But a majority of voters said that Oz has not lived in the commonwealth long enough to represent it effectively. Oz has said he moved to Pennsylvania in late 2020 after living in New Jersey for decades.

Georgia's incumbent Democratic Sen. Raphael Warnock addressed supporters in Atlanta just before 2 a.m. ET with results still trickling in and acknowledged that the race wouldn’t be called tonight as it still is too close to call.

“We're not sure if this journey is over today, or if there's still a little work yet to do, but here's what we do know. We know that when they're finished counting the votes from today's election, that we're going to have received more votes than my opponent,” Warnock said.

Neither candidate has cleared the 50% benchmark to win the race outright.

During his brief remarks, Warnock urged supporters to “keep the faith.”

“Whether it's later tonight, or tomorrow, or four weeks from now, we will hear from the people of Georgia," he said.

John Fetterman will defeat Mehmet Oz in Pennsylvania’s Senate race, CNN projects, picking up a seat for Democrats after the retirement of Republican Sen. Pat Toomey.

Fetterman, the state’s lieutenant governor since 2019, is still recovering from a stroke he suffered before the primary. At his election night party, he thanked his supporters and said he felt “so humbled.”

“We bet on the people of Pennsylvania, and you didn’t let us down,” he said.

Lamb, who won the Western Pennsylvania seat twice, retired from the House to run in the Democratic Senate primary, which he lost to Lt. Gov. John Fetterman.

Deluzio, a voting rights attorney and Iraq War veteran, ran neck-and-neck with Schaffer in most pre-election polling, and many in both parties viewed their race as a national bellwether.

Republican Monica De La Cruz will win the contest in Texas’ 15th Congressional District, CNN projects, signaling that her party has deepened its inroads with Latino voters in the Rio Grande Valley.

De La Cruz will defeat Democrat Michelle Vallejo in a contest that national Democrats had effectively given up on weeks before Election Day by directing their spending to other races.

De La Cruz campaigned on a return to former President Donald Trump’s border policies, and she embraced Trump’s falsehoods about election fraud, questioning her own loss in a 2020 congressional race.

Hassan thanked supporters before acknowledging her opponent, Republican Don Bolduc. She shushed the crowd when they began to jeer at the mention of Bolduc’s name.

“I want to take a minute to thank Don Bolduc for a hard-fought campaign and I want to thank Don Bolduc for his service to this country. We have differences, but we share a love for this country,” said Hassan, before turning her message of unity to Granite State voters. “I promise you, Democrats, Independents and Republicans — the people who voted for me and those who did not — that I will keep working every day to serve you faithfully, to listen to you and to work with you to address the challenges facing your families, our state and the country.”

Hassan’s victory speech focused on bipartisanship, with a commitment to work across the aisle on the economy and a nod to issues championed by her opponent on the trail.

“I will keep reaching out to colleagues from both sides of the aisle defined shared goals and the common ground and compromise necessary to help families and small businesses with the challenges that they face, like the high cost of housing and childcare,” said Hassan. “Of course, in order to have an economy that works, we have to be safe. The safety of our citizens and our nation is always government's first responsibility. And I will keep working to support our brave men and women of law enforcement and to keep our country safe.”

Meanwhile, Bolduc whose campaign had been bolstered by a polling surge in the final few weeks, addressed his supporters just before 11 p.m. ET, acknowledging Hassan’s win to the crowd but noting he’d not yet called the Democrat to concede at that time.

“Maggie Hassan has won,” said Bolduc to a thinned-out crowd at his Manchester Election Night headquarters, “I was told the protocol was to call her first, but I’m not one for protocol. I wanted to tell my supporters first.”

The Republican added, “This is not a loss. We woke a lot of people up. Hopefully, we put her on notice. And hopefully, she’ll do the right thing for New Hampshire."

Bolduc read from Rudyard Kipling’s “If” to the crowd of supporters before telling them, “Right now, in this nation, there are a lot of “ifs.”  We have done something here in NH. We have created a rumble.”

“We didn’t win today, but imagine 'if' we continue to come together, if we join hands, if we decided that they work for us and we don’t work for them,” the retired US Army General continued, “We demand that they do the right thing for us, our children and our great grandchildren […] if we can do this, even in losing we will win.”

Bolduc, who earlier sang “Country Roads” on stage with the band performing Tuesday night, closed by telling the room to “live free or die, baby”— a reference to the Granite State’s motto.