A video of an election official explaining a problem with vote tabulations outside a polling location in Maricopa County, Arizona, earlier Tuesday morning is spreading on social media, clocking up millions of views. The video, which was posted by a Republican activist, has already been viewed more than 2.5 million times on Twitter.

The clip is largely being amplified by right-wing personalities, some of whom are claiming — without evidence — that the machine issues are a sign of fraud.

“We’ve anticipated legitimate mistakes and issues with election infrastructure being reframed as fraud," Kate Starbird, an associate professor at the University of Washington who studies the spread of disinformation, told CNN.

The video shows an election worker in the Phoenix suburb of Anthem explaining a problem with tabulation machines rejecting ballots.

Election officials quickly responded, saying they were working on the issue and that voters whose ballots were not being accepted by a tabulation machine could put their ballot in a secure box and they would be counted after the polls close.

“No one is being disenfranchised. And none of this indicates any fraud or anything of that sort. This is a technical issue,” said Bill Gates, chairman of the county’s Board of Supervisors and a Republican himself.

A county spokeswoman added that the poll worker in the viral video did what they were supposed to. “That poll worker at Anthem was doing their job, providing voters the information they need to participate in this election, and the options they have. He was calm and transparent,” said Megan Gilbertson of the county’s election department.

“Today’s Election Day, so please do vote,” the vice president said to a table.

“Oh you voted, thank you for voting,” she said to another table.

At one point, when the vice president entered the second room of the restaurant, a woman stood up and pointed to an “I voted” sticker on her chest, prompting Harris to cheer.

“Remind everybody you know about the stakes,” Harris said. “Lots at stake.”

Harris and Emhoff went around taking photos with diners, and Emhoff was overheard telling one diner to “get the pancakes.”

The vice president ordered two dozen biscuits, saying, “I am not playing around with biscuits” and joking that Emhoff could have only one. She got butter and jam on the side before going into the kitchen to thank the cooks.

The voting hours at two precincts in Cobb County, Georgia, were extended by a state court judge after the election sites opened later than expected Tuesday morning.

One precinct will be open until 7:06 p.m. ET and another will be open to 7:45 p.m. ET, according to the Cobb County government website, which said the hours were extended by Superior Court Judge Gregory Poole.

"We're just hearing from election workers across the state that they're pleasantly surprised by how many people are showing up to vote in person," he said.

Rollow said he still expects all ballots will be counted by 8 p.m. local time on Wednesday, which is within 24 hours of polls closing.

A mother and son were removed as poll workers in Johns Creek, Georgia, minutes before polls opened this morning, after a social media post surfaced showing them attending the Jan. 6, 2021, attack on the US Capitol.

“I stood up for what’s right today in Washington DC. This election was a sham. Mike Pence is a traitor. I was tear gassed FOUR times. I have pepper spray in my throat. I stormed the Capitol building. And my children have had the best learning experience of their lives,” one Facebook post shared with CNN by state election officials read.

“I am aware that it occurred. That really is a Fulton County internal issue. They have to mitigate the risk the way they see fit given that information,” said Gabriel Sterling, chief operating officer for the Georgia Secretary of State’s office, when asked about it by CNN’s Erin Burnett Tuesday.

“I think it would have been better if they found out earlier potentially and worked with the people, but since it was so last minute and it came to light so late, I leave it to Fulton County. But yes, that did happen earlier this morning,” Sterling said.

The social media post is under “investigation for concern,” Nadine Williams, Fulton County interim director of registration and elections, said at a press conference earlier on Tuesday.

“We decided to remove them until we could complete the investigation,” Williams said.

“We just want to make sure the election is secure,” she added.

Social media posts and a comment made during a poll worker event was brought to the Fulton County board’s attention by a peer. Williams said the secretary of state’s office was consulted on the matter, and the state office agreed that there was a concern.

Williams said she was not at liberty to comment on the nature of the social media post when asked by a reporter, but she confirmed that it included a threat about election security.

“There were some things in there that were not allowed. You cannot take videos or photos in the election. That’s what brought it to our attention,” Williams said.

In eight US states, voters are sent a mail-in ballot automatically. Across the US, more than half of states require that mail-in ballots be received by Election Day. In 19 states, ballots can be counted if they are postmarked on or before Election Day. 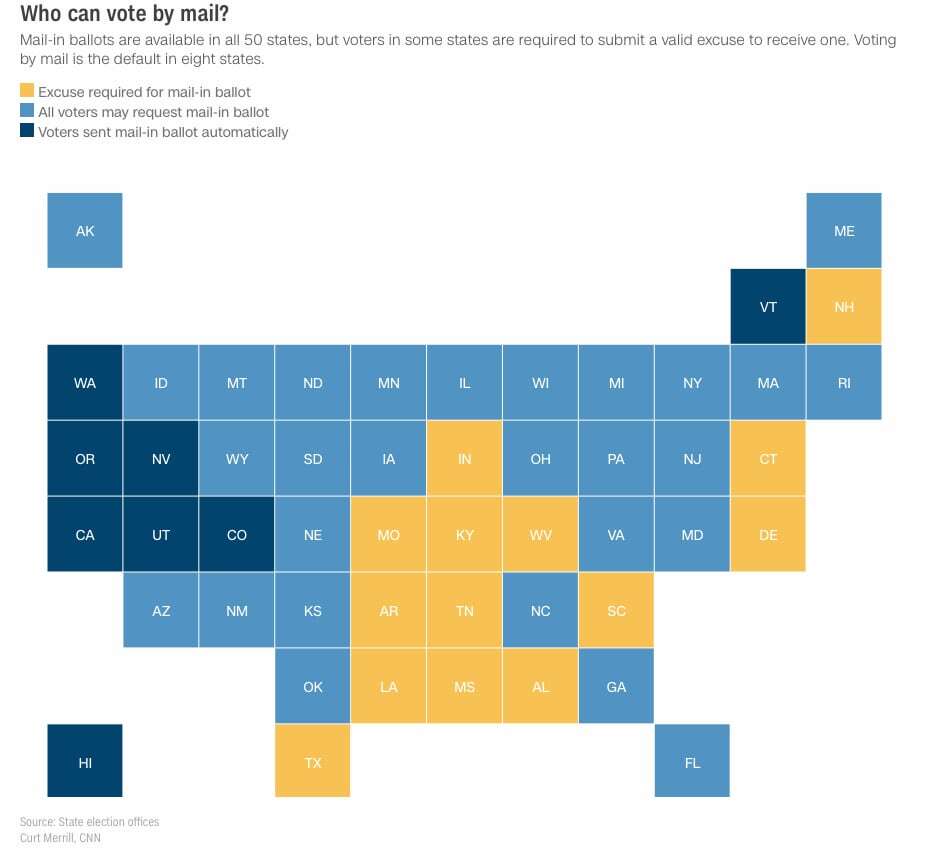 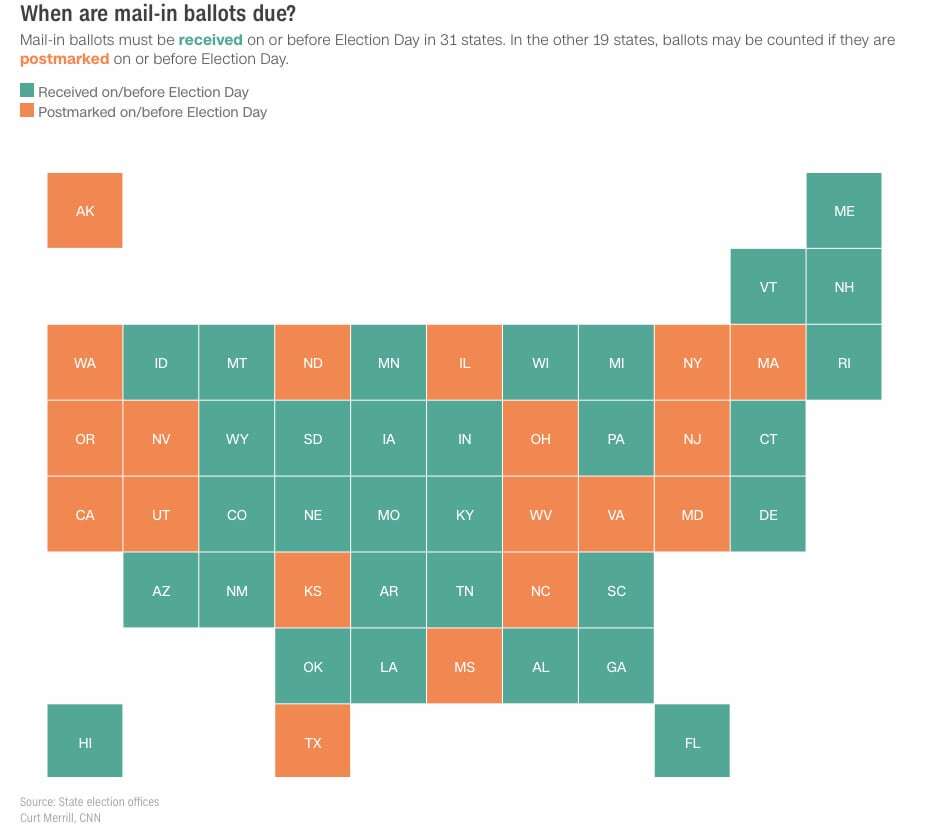 The five most expensive Senate races of 2022 have seen nearly $1.3 billion in spending across the primary and general elections, according to OpenSecrets, a staggering sum that speaks to the massive amounts of money flooding the political system.

Leading the way is the Pennsylvania Senate race, where Democratic Lt. Gov. John Fetterman and Republican Dr. Mehmet Oz are squaring off in the general election. All told, nearly $375 million has been spent on the race this cycle, OpenSecrets found.

Here's how the other races in the top five stack up in terms of total spending:

Pennsylvania was also the most expensive Senate race of the 2016 cycle, when Republican Pat Toomey was running for reelection. Total spending in that race was around $179 million, according to OpenSecrets — less than half the amount spent on the 2022 contest.

What numbers like these suggest is that attempts — earlier this century — to lessen the impact of money in politics have failed utterly. There is more money than ever before, and it's difficult to track where some of the money, spent by nonprofit groups that aren't required to disclose their donors, comes from.

Gabriel Sterling, chief operating offer for Georgia's secretary of state's office, says voter turnout across the Peach State has been "steady," although it's hard to "it's always difficult to know in the middle of the day how it's going."

Majority of polling locations have no lines, with average wait time of about two minutes, he told CNN Tuesday. "It's been a very efficient process."

Sterling also pointed to the record number of absentee ballots received in Georgia. It stands at about 234,000 ballots as of this morning, which is up from 2018's record of 213,0000 ballots, he said, adding that it takes a lot of pressure off officials when they start counting.

"We set records for early vote turnout. Between early vote and absentee — and absentee set a new record as of this morning of 234,000 for a midterm. That really takes away pressure off Election Day, because ... when we start today, nearly 37% of all our active voters had already cast a ballot," he said.

Sterling said that new laws passed in Georgia clarified that early in-person votes and absentee votes can be tabulated early, "which will hopefully get us some earlier returns in the 7:15, 7:45 and 8:00 hour from even some of our larger counties."