Michael Cohen denied he's ever visited Prague and the Czech Republic despite an explosive claim made in the infamous Russia dossier.

The dossier contains allegations against several of Trump's campaign officials and associates of having secret contacts with Russians during the campaign. The dossier also claims Cohen secretly met Russian officials in Prague to coordinate Kremlin interference in the election and do damage control if the alleged collusion was exposed or if Clinton won.

When asked about Prague, here's what Cohen said today:

Rep. Ralph Norman: Have you ever been to Prague?

Cohen: I’ve never been to Prague.

Cohen: I’ve never been to the Czech Republic.

Some background: Last year, Cohen's lawyer at the time told the House Intelligence Committee that his client "has never traveled to Prague, Czech Republic, as evidenced by his US passport" and that Cohen "did not participate in meetings of any kind with Kremlin officials in Prague in August 2016."

He has cooperated with special counsel Robert Mueller, and prosecutors said in a court filing he provided "useful information concerning certain discrete Russia-related matters core to its investigation." Cohen says he has shared "everything" with Mueller and that the Prague claims are false.

Federal prosecutors in New York are investigating unspecified criminal activity by President Trump, according to Cohen.

The Manhattan US Attorney’s office, which prosecuted Cohen, is examining both a conversation between Trump and Cohen that took place two months after the FBI searched Cohen’s properties in April 2018, according to Cohen, as well as other wrongdoing or illegal behavior by Trump.

"I’ve been asked by them not to discuss and not to talk about these issues,” Cohen told the House Oversight committee regarding the Manhattan US Attorney’s office when asked about the June 2018 talk he had with Trump, adding that the office was probing that matter.

New York federal prosecutors have pursued two Trump-related investigations since charging Cohen in August 2018: one concerning whether executives at the Trump Organization violated campaign-finance laws in an effort to reimburse Cohen for a hush money payment he made to adult-film star Stormy Daniels, and another into the Trump inaugural committee. It’s not clear whether the investigative activity Cohen disclosed during his testimony is related to either of those probes.

A spokesperson for the US Attorney’s office declined to comment.

Debbie Wasserman Schultz — a member of the House Oversight Committee who was personally affected by the hacking of the Democratic National Committee when she was the chair — said she believes Michael Cohen’s testimony.

She also said she believes the things Cohen alleged Trump did — but it's too soon to be talking about impeachment.

During questioning, she asked if it was it was possible that the "whole family is conflicted or compromised with a foreign adversary." Cohen said it was.

“I think he did two important things in his response to my question. One was he essentially implicated the likelihood that not only President Trump, but Ivanka Trump and Donald Trump Jr., Jared Kushner and [others] in the Trump family would have been involved in being potentially compromised by Russia even before the beginning of the election,"

However, when asked if these are impeachable offenses, she said this:

“We just need to continue to let the information that we are gleaning from testimony like this and the work that the Congress is doing and Mr. Mueller is doing to play out. We aren’t at impeachment at this point.” 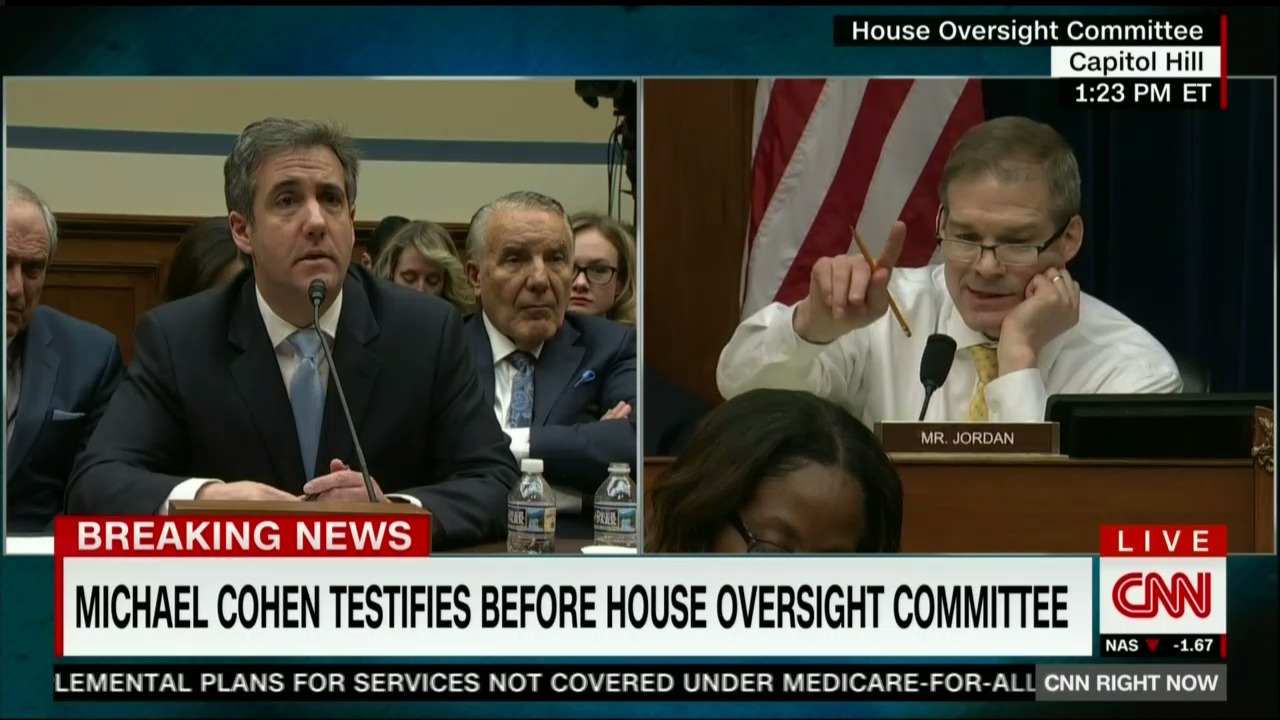 Rep. Jim Jordan asked Cohen: "You started the campaign for president of the United States for Donald Trump?"

"I certainly did, sir," Cohen responded.

Cohen then explained that he had started the website after reading a newspaper that polled people on who they'd vote for in 2012.

"So I brought it into his office and I said to him, 'Mr. Trump, take a look at this, and he said wouldn't that be great?' And with that is where it all started," Cohen said.

See the moment below:

Wikileaks tweeted that its publisher Julian Assange never has a phone call with longtime Trump associate Roger Stone, according to a statement it released during Michael Cohen's testimony.

In the statement, Wikileaks said on March 16, 2016, it "launched a searchable archive for over 30 thousand emails & email attachments sent to and from Hillary Clinton's private email server while she was Secretary of State."

What Cohen said: In his testimony, Cohen said Trump had knowledge of Stone's efforts to reach out to WikiLeaks ahead of the release of hacked Democratic emails during the 2016 campaign.

Earlier this year, Stone was indicted by a grand jury on charges brought by special counsel Robert Mueller, who alleges that the longtime Trump associate sought stolen emails from WikiLeaks that could damage Trump's opponents while in coordination with senior Trump campaign officials.

Some very important context: The March 16, 2016, release was not the infamous election stuff. It was a searchable archive of emails from Clinton’s private email server while she was secretary of state. They had already been made public after a FOIA lawsuit.

However: It’s true that Assange previewed upcoming election-related leaks before the supposed phone call with Roger Stone. (In other words, it’s entirely possible that Stone just saw this one in the news and was bluffing when he spoke to Trump.)

Michael Cohen has testified that he’s cooperating with prosecutors still in the hopes they’ll ask a federal judge to reduce the sentence he’s already received.

The Rule 35 motion is the post-sentencing equivalent of the “5K” letter of cooperation that was sought after by many of special counsel Robert Mueller's defendants who pleaded guilty before they were sentenced. Among the Mueller defendants, only Michael Flynn received a "5K" letter. Even Richard Pinedo, who helped investigators understand how the alleged Russian troll farm bought fake identities online and helped prosecutors identify the individuals they charged, didn’t get a "5K" letter from Mueller’s team.

Democratic Rep. Gerry Connolly said committee staff uncovered an email the White House had mistakenly released to lawmakers that revealed a meeting President Trump had requested in May of 2017 with Michael Cohen and Jay Sekulow, a member of the president’s legal team.

Cohen could not remember the meeting "off the top" of his head, but said, “I recall being in the White House with Jay Sekulow and it was in regard to the document production as well as my appearance before the House Select Intel but I’m not sure if that specifically is what you’re referring.”

Cohen said in that trip to the White House he had a conversation with Trump about his impending testimony.

“He wanted me to cooperate, he also wanted just to ensure I’m making the statement, and I said it in my testimony, ‘There is no Russia, there is no collusion, there is no deal,’ he goes, ‘It’s all a witch hunt,’ he goes, ‘This stuff has to end.’”

“At the end of the day I knew exactly what he wanted me to say,” Cohen said.

He said he would check his documents and get a more fulsome answer for Connolly.

Cohen said he thought Sekulow was in the meeting as a hand-off, “because he was going to be representing Mr. Trump going forward as one of his personal attorneys in this matter.”

Asked by Connolly if he was “coached” by the President on how he should testify before the Intelligence Committee, Cohen said “it’s difficult to answer” and repeated his previous testimony about the way Trump had back-handedly discussed Russia with him.

GOP Sen. Lindsey Graham said he believes Michael Cohen's testimony helped President Trump's insistence that his campaign did not collude with Russia during the 2016 election.

"If you had to prove collusion using Mr. Cohen, it was a good day for the Trump team. It is clear to me that Mr. Cohen has had a change of heart about Trump. But the central issue has always been did the Trump campaign collude with the Russians. And Debbie Wasserman Schultz’s exchange with Mr. Cohen was pretty devastating to the idea that Trump colluded. Cohen said no — I don’t know ... The point is I think on the collusion question Michael Cohen was very helpful to the Trump narrative that there is no evidence of collusion.”

What this is all about: Earlier today, Cohen said he has no proof that Trump colluded with Russia, but added that he has "suspicions."

"Questions have been raised about whether I know of direct evidence that Mr. Trump or his campaign colluded with Russia. I do not, and I want to be clear." he said. "But I have my suspicions."

Meanwhile, Republican Sen. John Kennedy told CNN that he had a hard time believing anything Cohen said during his testimony. (Cohen testified behind closed doors to a Senate panel yesterday.)

Kennedy suggested that perhaps Cohen was “unstable” and said that he “wouldn’t cash his check” when it came to Cohen’s creditability.

Cohen, Trump's former attorney and personal fixer, paid Daniels $130,000 to prevent her from speaking publicly about her alleged affair with Trump.

She is also suing Cohen and Trump over the payment.