Michael Cohen said he has no evidence suggesting President Trump or his campaign colluded with Russia during the 2016 presidential election.

"Questions have been raised about whether I know of direct evidence that Mr. Trump or his campaign colluded with Russia. I do not, and I want to be clear."

Then he added, "But I have my suspicions."

Among the audience for this morning’s hearing is Lynne Patton, a high-ranking political official in the Department of Housing and Urban Development. Patton is sitting behind Republican committee member Mark Meadows of North Carolina, a conservative who is very close with President Trump.

She tweeted about the hearing and Michael Cohen's allegations:

HUD spokesperson Raffi Williams released this statement: “Lynne is on leave today and is at the hearing in her personal capacity.”

Some background: Patton has a long history with both the Trump family and Michael Cohen. Cohen introduced Patton, a paralegal, to the Trumps. She went on to serve as vice president of the Eric Trump Foundation and even planned Eric’s wedding in 2014. Her appointment in 2017 to head HUD’s New York and New Jersey office was met with criticism, and she has continued to court controversy in office with her outspoken activity on social media.

It’s unclear why Patton, who works out of Manhattan, is on Capitol Hill. Asked for comment about her presence, Meadows told CNN “she has information.” Patton is black, and Cohen testified Wednesday that Trump is a “racist” who has said disparaging things about black people.

In his opening statement, Michael Cohen claimed that President Trump knew about the released of hacked emails from the Democratic National Committee before they dropped.

Cohen went on to describe Trump's knowledge of the emails:

"As I earlier stated, Mr. Trump knew from Roger Stone in advance about the Wikileaks drop of emails. In July of 2016, days before the Democratic convention, I was in Mr. Trump's office when his secretary announced that Roger Stone was on the phone. Mr. Trump put Mr. Stone on the speakerphone. Mr. Stone told Mr. Trump that he had just gotten off the phone with Julian Assange and that Mr. Assange told Mr. Stone that within a couple of days there would be a massive dump of emails that would damage Hillary Clinton's campaign."

Trump, he said, responded "wouldn't that be great." 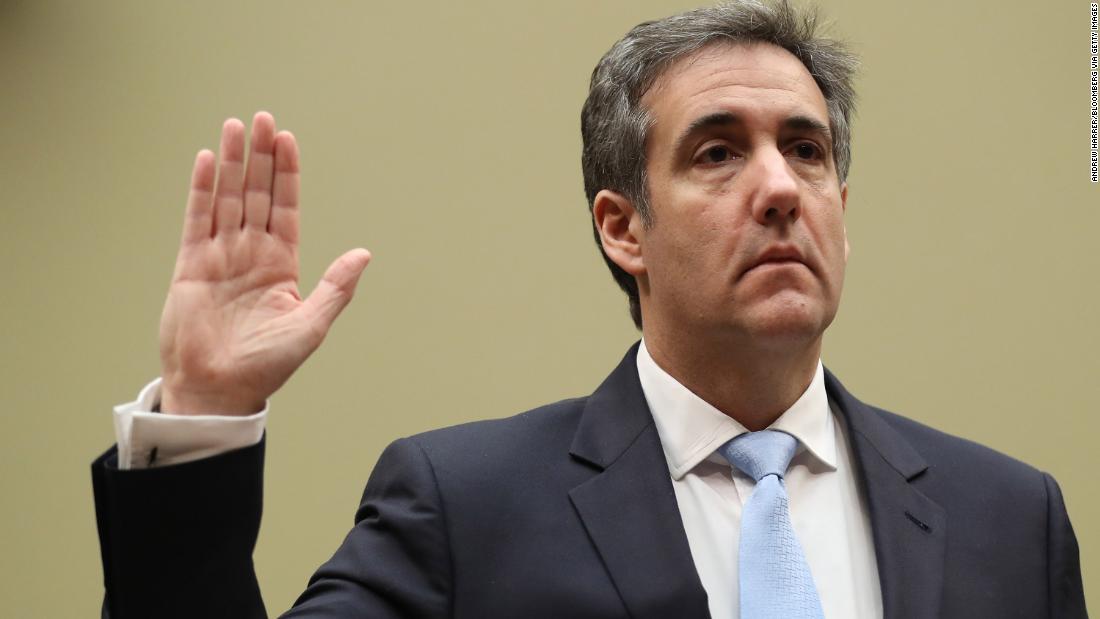 Michael Cohen said that while President Trump has publicly made racists statements, he is "even worse" when talking behind closed doors.

"Mr. Trump is a racist. The country has seen Mr. Trump court white supremacists and bigots. You have heard him call foreign countries shitholes," he said. "In private, he is even worse."

Cohen then recounted some of the private statements Trump made to him:

"He once asked me if I could name a country run by a black wasn't that wasn't a shithole. This was when Barack Obama was President of the United States," Cohen testified. "And while we were once driving through a struggling neighborhood in Chicago, he commented that only black people could live that way. And he told me that black people would never vote for him because they were too stupid."

The circumstances of this hearing following Cohen’s cooperation with special counsel Mueller make it extremely difficult for him to lie or dodge questions.

The Special Counsel’s Office made it clear in court that they believe what Cohen told him. They almost certainly have asked him about his interactions with the President regarding Russia and Roger Stone, given their allegations about Stone in court and how thorough they’ve been—and will likely know if his statements today are perjury.

Prosecutor Jeannie Rhee went out of her way to speak about how careful Cohen was since pleading guilty.

She said at his sentencing:

“Finally, your Honor, what we want to highlight for this Court is that one of the things that we and the Special Counsel's Office have most appreciated about Mr. Cohen's assistance is that he has provided valuable information, investigative information, to us while taking care and being careful to note what he knows and what he doesn't know. Rather than inflate the value of any information that he has brought forward to us in what he had to provide, Mr. Cohen has sought to tell us the truth, and that is of utmost value to us as we seek in our office to determine what in fact occurred. And so we want to highlight that for the Court and to underscore what we set out in our submission about the value, the nature, the reliability, and the credibility of Mr. Cohen's assistance.”

The Special Counsel’s Office said Tuesday it would decline to comment on Cohen’s truthfulness “beyond what was said in court.”

Cohen added that Trump's team "reviewed and edited" a statement he gave to Congress about the project:

"There were at least a half a dozen times between the Iowa caucus in January of 2016 and the end of June when he would ask me, how's it going in Russia, referring to the Moscow tower project. You need to know that Mr. Trump's personal lawyers reviewed and edited my statement to Congress about the timing of the Moscow tower negotiations before I gave it."

Remember: Cohen has pleaded guilty to lying to Congress about the Russia investigation.

Michael Cohen apologized to Congress today for lying in his previous testimony before them, saying he did so to protect President Trump.

"The last time I appeared before Congress, I came to protect Mr. Trump. Today I am here to tell the truth about Mr. Trump," he said.

Cohen, who was sentenced to three years in prison for crimes that included arranging payments during the 2016 election to silence women who claimed affairs with Trump, said he working on "a path of redemption."

In his opening statement, GOP Rep. Jim Jordan wasted no time in going after some non-lawmakers: Tom Steyer and Lanny Davis.

Steyer is the liberal billionaire who has spearheaded an expensive effort to impeach President Donald Trump. He’s also spent tens of millions of dollars this decade trying to elect Democrats and promote an agenda to address climate change.

Davis, Cohen's lawyer who is sitting behind him at today's hearing, is a long-time Washington hand.

He was President Bill Clinton’s White House counsel (he left before the Lewinsky scandal) and has represented clients such as the Washington Redskins, Alex Rodriguez, Martha Stewart and Penn State University in the wake of the Jerry Sandusky sexual abuse scandal.

President Trump's attorney Michael Cohen said he regrets the day he said "yes" to his boss.

"Never in a million years did I imagine when I accepted a job in 2007 to work for Donald Trump that he would one day run for the presidency, to launch a campaign on a platform of hate and intolerance and actively win. I regret the day I said yes to Mr. Trump," he said.

"I regret all the help and support I gave him along the way," he said.

Cohen said he had "misplaced loyalty" and he is ashamed that he "chose to take part in concealing Mr. Trump's illicit acts."

"I am ashamed of my weakness and my misplaced loyalty, of the things I did for Mr. Trump in an effort to protect and promote him. I am ashamed that I chose to take part in concealing Mr. Trump's illicit acts, rather than listening to my own conscience. I am ashamed because I know what Mr. Trump is. He is a racist, he is a conman, and he is a cheat."